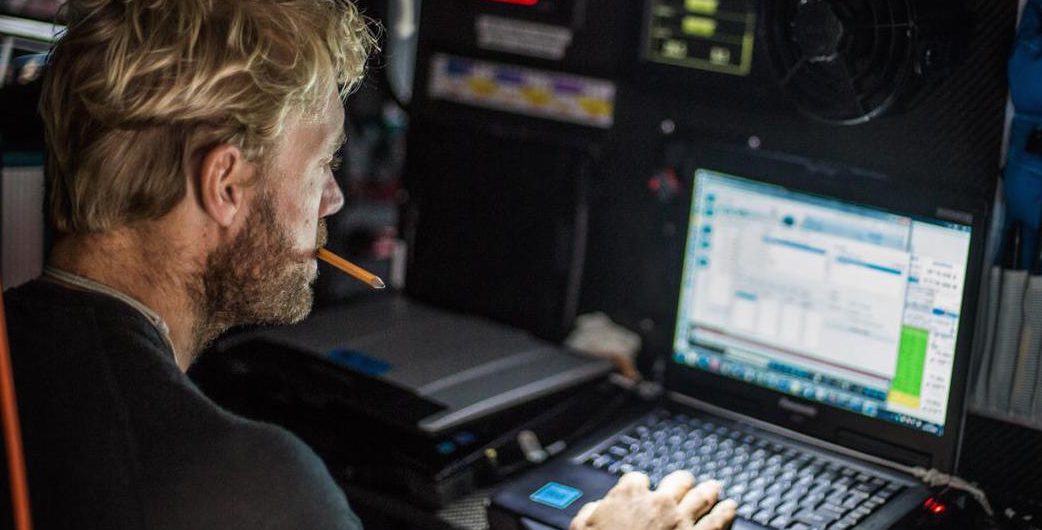 You know something really big has gone on in the sailing world when even The New Yorker magazine feels they have to say something about it. The grounding and abandonment of Team Vestas Wind has been a major publicity coup, for both the Volvo Ocean Race and the boat’s sponsor, Vestas Wind, made all the sweeter by the fact of the happy ending: no one was seriously injured. The cause of the accident has been pretty clearly identified. The Cargados Carajos Shoals were in an exclusion zone that was opened to the fleet the night before they started leg 2 of the race out of Cape Town. Vestas navigator Wouter Verbraak (see image up top) wasn’t aware that the shoals were directly on the route north to Abu Dhabi, didn’t have time to fully scope out the new track before the start, and assumed he’d be able to do so while racing the leg. In the end he never zoomed in close enough on his electronic chart to see the shoals, and the crew sailed right on to the reef at night having no idea it was there.

This obviously was a stupid mistake, and Verbraak, to his credit, has openly confessed to it. The boat’s skipper Chris Nicholson likewise has accepted full responsibility for what happened and recently gave two long interviews—one in print with Sail-World (a big three-parter that starts here) and one on video with Sailing Anarchy. These are both well worth your attention.

As far as commentary goes, I think one of the best responses to the accident has come from Ben Ellison at Panbo, who goes into some detail on the relevant technical aspects of electronic charting and points out that integral route conflict alarms are an available technology that needs to be more fully exploited both by the electronics industry and by navigators. Another is from Rick Spilman, on the Old Salt Blog, who puts the Vestas grounding in a much broader historical perspective and surveys similar technology-assisted mishaps, starting with the famous Andrea Doria disaster of 1956, wherein two ocean liners tracking each other on radar collided in fog off Nantucket Shoals, killing 51 passengers and crew. Note, too, that Spilman in his piece references another fine bit of commentary from Elaine Bunting of Yachting World.

On reading and watching the two interviews with Nicholson, I was struck most by the great danger the Vestas crew found themselves in immediately after grounding. I had imagined they were able to simply step off the boat, but in fact the situation was much, much dicier. A simple safe exit was never assured, as the boat was moving around a lot, suffering serious damage as it was pounded by the surf, and there was a real threat of it rolling over on top of everyone. (For a detailed description of all this see Part 2 of the Sail-World interview.)

It is a testament to Nicholson’s leadership and to the crew’s ability that no one was really hurt. Of course, they were also damn lucky. If the boat’s keel had come off on impact and the hull had flipped immediately, the consequences would have been fatal for sure. The fact that the canting keel’s joint survived the ordeal (and evidently is still intact, though the keel bulb itself fell off quite promptly) says a lot about the integrity of these new Volvo boats. 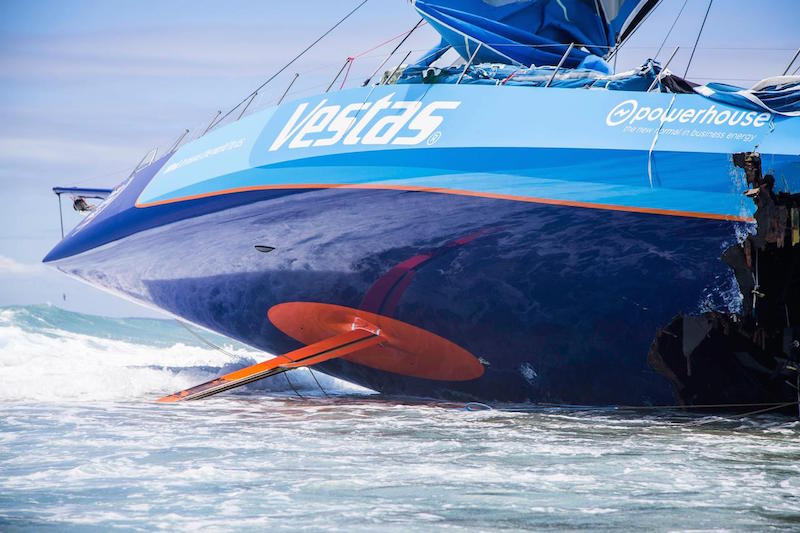 As to Sailing Anarchy’s video interview, I was impressed that Alan Block had the chutzpah to query Nicholson directly on the accident’s publicity value, pointing out that the best result for a Volvo race sponsor is always for a boat to “break or win.”

“I hear you,” responds Nicholson. “But I don’t recommend this road for anyone.” 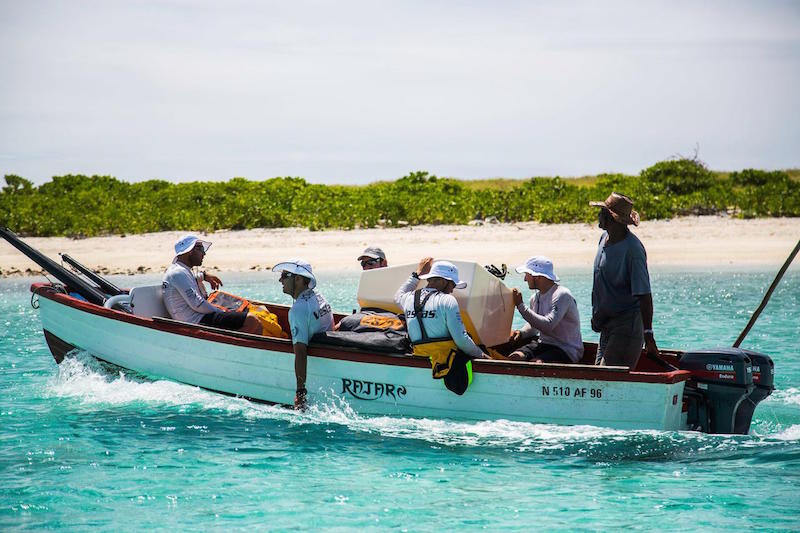 Sponsor Vestas Wind won major green publicity points as the team worked to immediately remove all pollutants (see that fuel tank there?) from the wreck

Having absorbed all this now, I still have some questions in my mind:

1. This exclusion zone—was it intended to protect the boats from the shoals or from Somali pirates? If the former, didn’t race organizers have a positive obligation to point the shoals out to all competing navigators? Shouldn’t they have nav briefings before each leg in any event? It seems Team Vestas Wind weren’t the only ones who were surprised to find the reef there, though they were the only ones who didn’t find it before hitting it.

2. Ben Ellison has pointed out that chart alarms could easily be improved. What about also making obvious hazards on electronic charts more obvious? All it takes when you’re zoomed out too far is a little box saying: “Danger! Zoom in here.”

3. Verbraak apparently had paper charts aboard, but has stated he didn’t have what he needed to suss out the newly opened exclusion zone en route. Did they have the wrong charts, or what?

The VOR leadership has announced they will conduct a thorough investigation and release a full report on the incident, and I imagine we will see some changes in their relevant rules and regs subsequent to this. Team Vestas Wind meanwhile is both moving to get their dead boat off the reef as quickly as possible while simultaneously scrambling to put a new boat together in time to rejoin the race. According to Nicholson, they have received many offers of support from the other teams to help do this.

BONUS VIDEOS: Yes, there is yet another video of the grounding to watch. This one is nicely organized and sums the whole experience up rather neatly:

Note that during the actual black-and-white grounding footage we now know that what everyone is looking at over the leeward (port) side just before they hit is some white gleaming on the water that they erroneously believed was moonlight.

Plus, here’s a video of the post-wreck press conference held in Abu Dhabi:

BONUS ANECDOTE: I was very interested to learn while studying his two interviews that Chris Nicholson had never before run aground while sailing. I’m guessing this is because he is a fancy high-paid racing sailor. As a lowly unpaid cruising sailor, I run aground all the time. Indeed, whenever another cruiser tells me proudly he or she has never run aground, I always assume they haven’t been sailing very long.

Most of my groundings, of course, have been in situations where I knew I was cutting it close and the bottom was just sand or mud. I did, however, have one full-on seemingly-out-of-nowhere major-could-have-been-a-shipwreck grounding just like Team Vestas Wind.

This was back in 1990, when a friend of mine, Richard, asked me to help him sail his new Dutch lemsterrak (he’d just had it shipped over from Holland) from Sag Harbor, Long Island, to Newport, Rhode Island. Richard had never sailed out of sight of land before and so wanted me to do the navigating.

The boat in fact had very little navigation equipment. You couldn’t read the one compass from the helm (I moved it so we could), and there were no dividers or parallel rules or any other such tools onboard. We did have a paper chart, but of course nothing like Loran or GPS.

I laid out a course as best I could from Sag Harbor to the entrance of the Great Salt Pond on Block Island, where we planned to spend the night. I then stayed on deck closely monitoring our whereabouts until shortly after sunset, when we raised a flashing red light I was sure marked our target.

“Steer for that light,” I told Dave, our other crew member, who was on the tiller.

Then I went below for a little nap. Richard, our putative skipper, meanwhile decided to do the same.

I awoke a few hours later and went on deck to find everything was pitch black with very poor visibility, but with that blinking red light plainly visible ahead of us and seeming still to be some ways off. Dave, the least experienced sailor onboard, was still happily steering straight for it. Richard, meanwhile, was still asleep.

Still yawning from my nap, I went forward to see if I could see anything more clearly from the bow. I was up there peering ahead into the impenetrable gloom when suddenly the blinking red light disappeared.

I was walking aft again to tell Dave we should maybe turn around, when the boat suddenly slewed up sideways on to a beach. (It turned out to be the beach just south of the pond’s entrance.) Very fortunately, if you are going to do something this stupid, a Dutch lemsterrak is the boat to do it in. They are basically flat-bottomed sailing barges with leeboards and are designed to take the ground comfortably. Also, conditions were calm. We lay all the rest of the night on the beach, suffered no damage, and were easily hauled off by a tow boat in the morning. 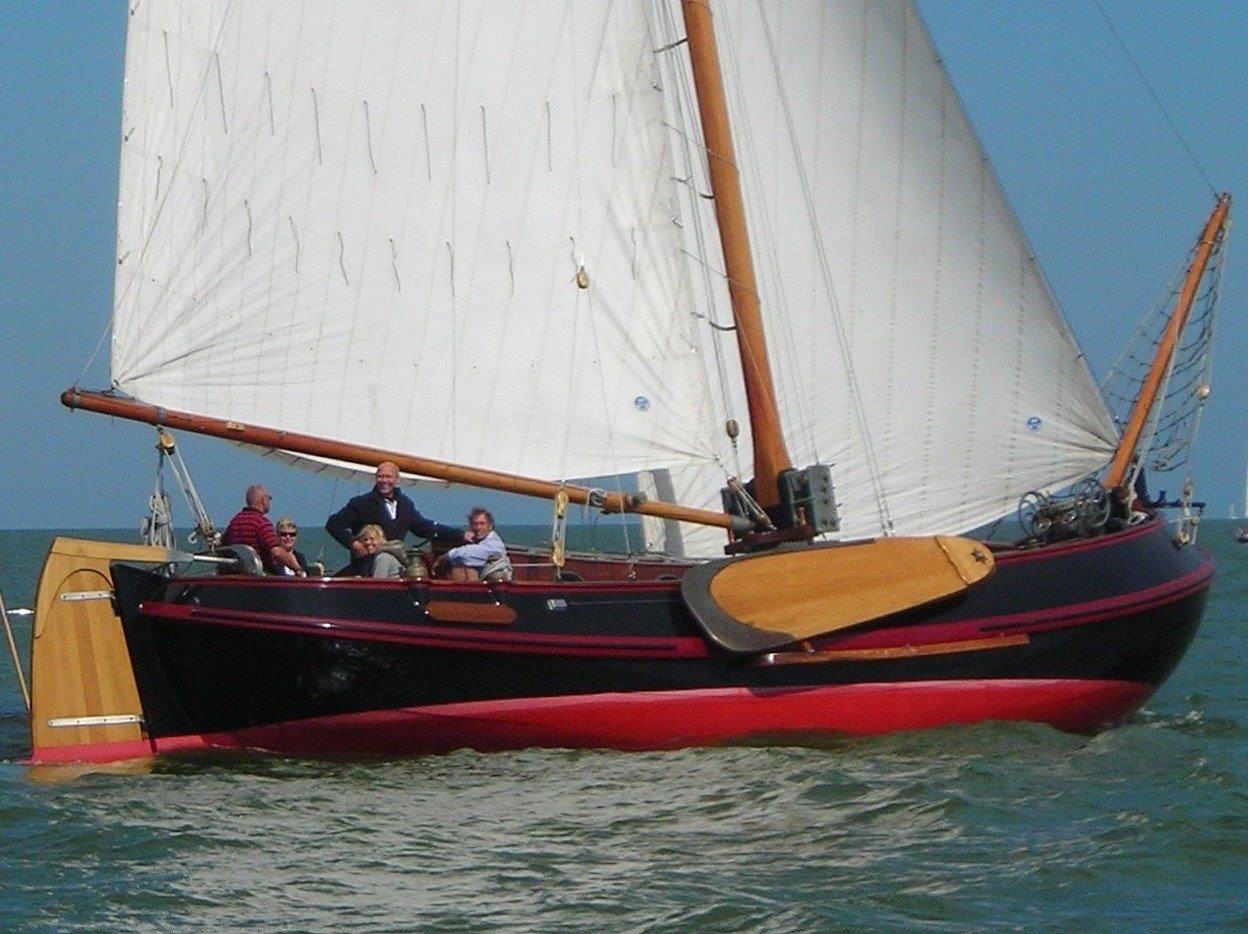 An example of a lemsterrak under sail. They are very versatile vessels

There are, of course, many important lessons to be learned from this mishap, and I am very willing to have you all tell me what they are.

I’ll start the discussion by asking another question about the VOR. Specifically: should it be sailed in lemsterraks?

UPDATE (December 23): Team Vestas Wind has succeeded in removing the wreck of their boat from the reef. Skipper Chris Nicholson and the team’s shore manager Neil Cox led a team of local residents, who managed to float the hull in one piece across the reef and into the lagoon, where it was loaded on to a Maersk container ship. The rig reportedly was cut up and shipped aboard in a 40-foot container. 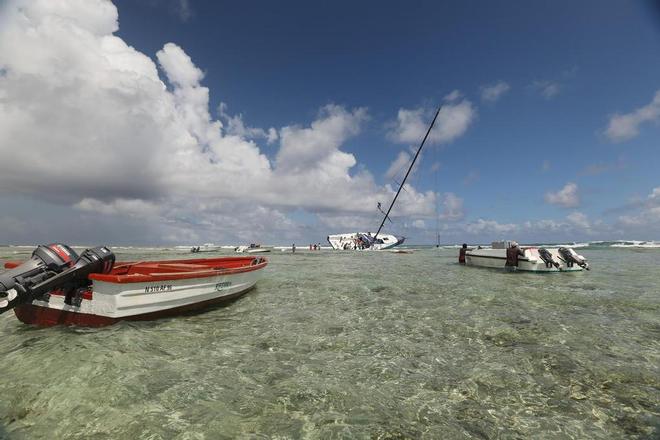 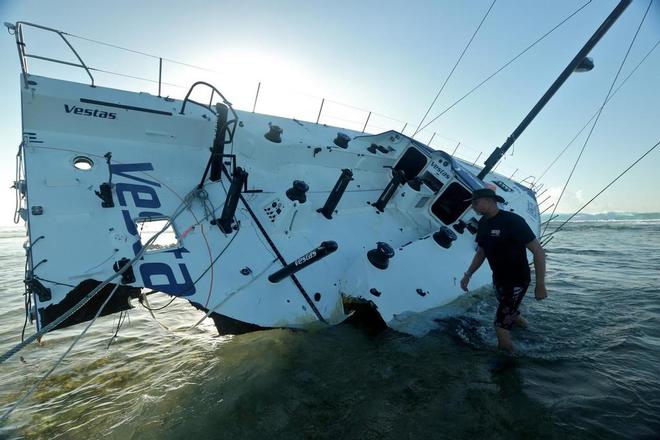 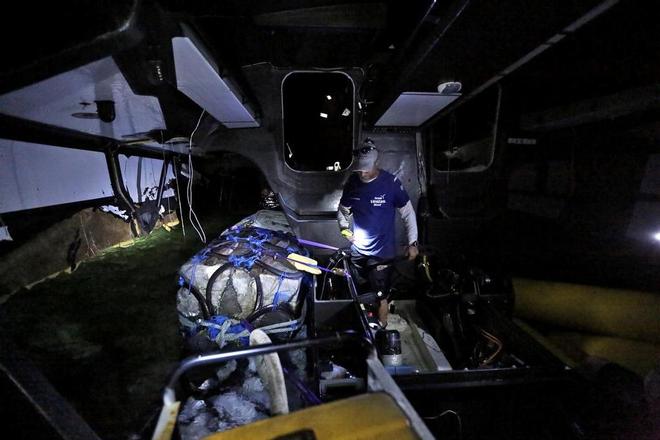 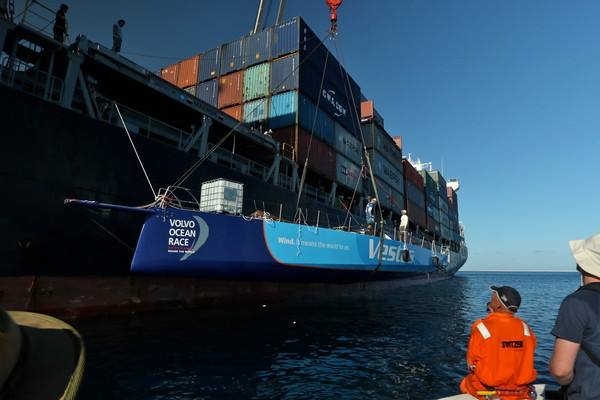 A job well done for sure! Frankly, I had assumed they would have to cut the hull up to get it off. Taking it out in one piece is a real accomplishment.