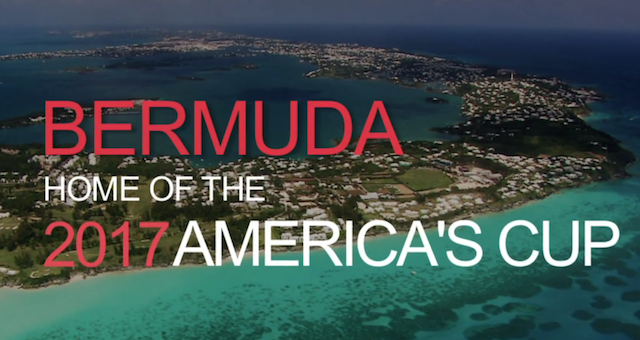 Since word first leaked out two weeks ago that Bermuda would be selected to host the 35th America’s Cup in 2017 there has been a drumbeat of criticism in the sailing community. People saying the island doesn’t have the infrastructure to support the event, that the sailing conditions are not adequate, that it would be a travesty for an American defender to defend the Cup in foreign waters, and mostly, it seems, that the “real reason” Larry Ellison wants his Oracle Team USA to defend the Cup in Bermuda is because of its status as an international tax haven. Well, today the rumor became official, Bermuda IS the venue, and funnily enough not one member of the media attending the press conference in New York had the cojones to ask a single question about taxes.

Why is that? Why is it that people do nothing but bitch, bitch, bitch about the way the America’s Cup is run, no matter who is running it, no matter how it’s being run? And when someone who has strong opinions about the Cup finally gets a chance to actually do something about it, even just to ask a simple question in public, they gape and do nothing?

At least the folks at Sailing Anarchy, long one of the most virulent critics of Cup management, have acknowledged this disconnect. Their explanation of why they decided not to bother traveling to New York to harass the Powers That Be, published yesterday, is pretty right on, IMHO. They call it Dyscuptoptia, this disease of irrationality that seems to afflict us all when it comes to all matters Cup-related.

Personally, I’m psyched that Bermuda is the venue. Partly this is personal: I’ve always liked Bermuda, I visit often (always in some capacity related to sailing), I have friends there. But mostly it’s objective: Bermuda has a great sailing heritage, it is tightly linked to the United States and its sailing community (at least on the East Coast), the hospitality is fantastic, and I guarantee you almost every single soul there will be very invested in this event. Sure, there will be some problems to work out, but none of them are insurmountable.

It was implied but not stated at today’s press conference that the course for the America’s Cup will be set on Great Sound, which is the great bight inside the island’s “fishhook” at its western end. 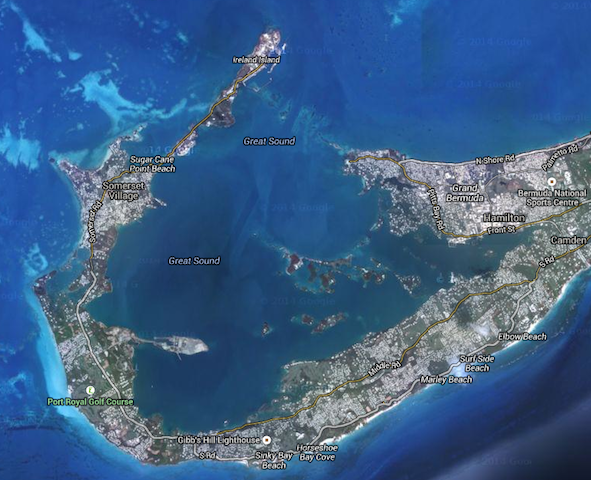 Again, for some reason, no media people at the press conference asked any questions about this. Jimmy Spithill, representing Oracle Team USA, did acknowledge that races would be run on “a tight track.” As you can see in that aerial Google map up there, it will be tight indeed. From Ireland Island straight across to the Gibb’s Hill Lighthouse is a distance of only about five miles, and it looks to me like you could set at most a three- to four-mile straight-line windward-leeward course inside the sound proper. Whether that’s too short or not for 62-foot foiling catamarans to really strut their stuff I don’t know, but it does look like a great spot for so-called “stadium sailing.”

There was an announcement that the old Royal Navy Dockyard on Ireland Island will be made over into a unitary America’s Cup village with a genuine “pit row” that has all team facilities in one location, and those attending the press conference (or streaming it live online, like me) were treated to a hot promo video with lots of artist’s renditions of what a wonderful village it will be:

I have some questions about this, too, and hopefully I’ll soon be able to buttonhole some folks I know in Bermuda and get some answers about how the logistics (like how you get hordes of people out there and back) might actually work. 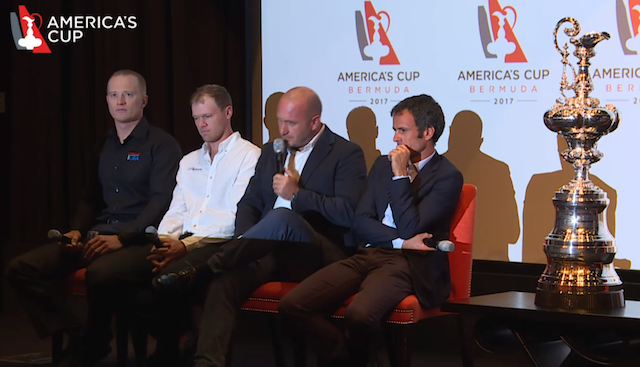 True, the America’s Cup has often been crazy and unpredictable, but this is inherent to its being organized as a charitable trust with a crazy core contradiction–that the putative trustee should have to compete with putative beneficiaries for the corpus of the trust. If you want to change the fundamental nature of the Cup, you have to change that fact, and the only way you, me, or even Larry Ellison can do that is by filing suit in New York state court.

Let’s stop whining and just be proud of all that.