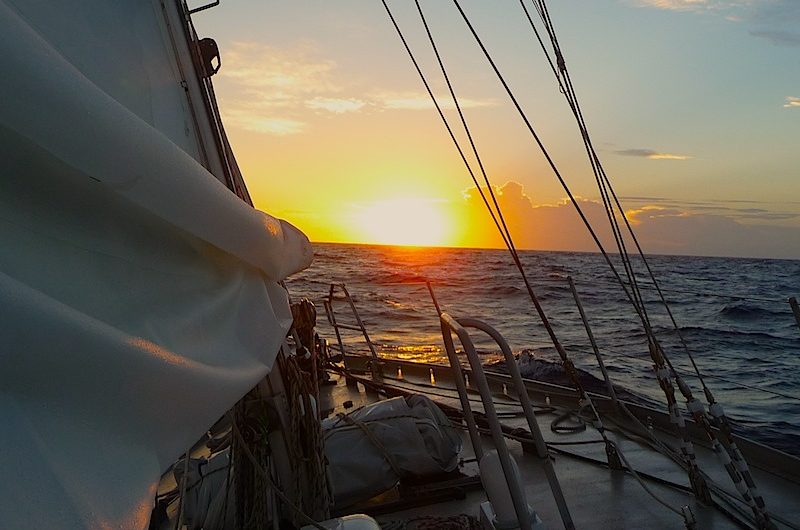 As I had expected, we encountered mostly headwinds after we finally left Bermuda bound for St. Maarten on the morning of Saturday, November 8. Even worse, early on in the passage, when our headwinds were most vigorous, we spent about a day and a half pounding our brains out sailing continuously in the wrong direction. The photo up top says it all. When voyaging south, you do NOT want to see your bow pointed at the sunrise with deep reefs in your mainsail. This never smells like progress and is very bad for crew morale. At first, as skipper, I felt rather virtuous, getting all my easting in early in the game, regardless of the pain, but then later I got nervous. I started wondering: what if we NEVER get a chance to turn south?

By the time our chance finally did come, on Monday afternoon, when a weak squall line at last decelerated the wind and bent it a little in our favor, we had sailed east about 185 miles since leaving Bermuda and were actually 90 miles east of the longitude of St. Maarten, our putative destination. And, of course, all that squall line really did was allow us to motorsail toward the south, but we were by then so tired of getting beat up going in the wrong direction that this seemed like a great blessing.

Alas, it was a blessing that wore thin, as we had to do a great deal of motoring to get anywhere. Thankfully, we did have two streaks of good luck, on Tuesday and Wednesday, when the wind veered and strengthened enough that we were able to sail without the engine for several hours heading more or less toward our goal at a good rate of speed. Otherwise we had the engine running most of the time until we were below 22 degrees north latitude, where we at last picked up the trades, which were weak and blowing mostly from the southeast. In all we spent almost 80 hours with the engine running on this leg of the trip, which is the most time I’ve ever spent motoring on any passage I’ve made aboard Lunacy. 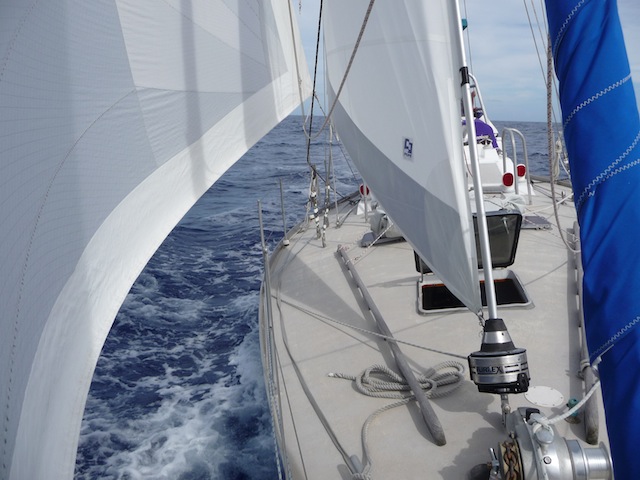 Sailing south at last, with some help from the screecher, seen here flying in tandem with the staysail

But we knew the wind was going to be uncooperative when we left Bermuda. So we couldn’t really complain too much about that. What we hadn’t counted on were the great nasty clumps of Sargasso weed that we encountered. Bits of the stuff started showing up here and there early on, and as we got further and further south the islands of weed just kept getting bigger and bigger. 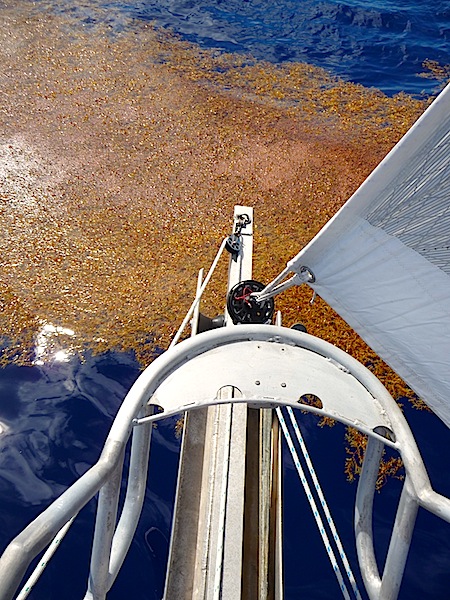 We have seen the enemy, and it looks like this

Finally, on Saturday, our last full day offshore, the mats were so big they were choking the rudder. On three occasions, once that afternoon and twice during the night, there was so much weed caught on the rudder skeg our speed was almost cut in half and we couldn’t really steer properly. To put things right again we had to roll up the headsail and stop the boat each time so the weed could fall off.

It really did seem that the ocean did not want Lunacy to go south this year. But we did get there in the end and arrived early Sunday morning, almost eight days after leaving Bermuda. 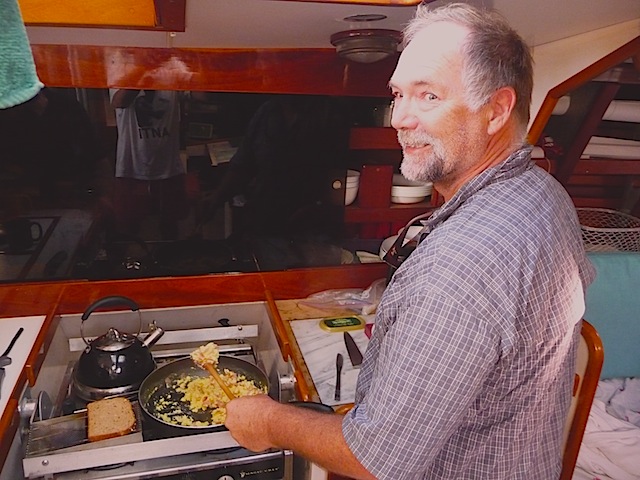 Eggs! We must have eggs! Peter “Egg Man” Nielsen insisted on bringing a large supply 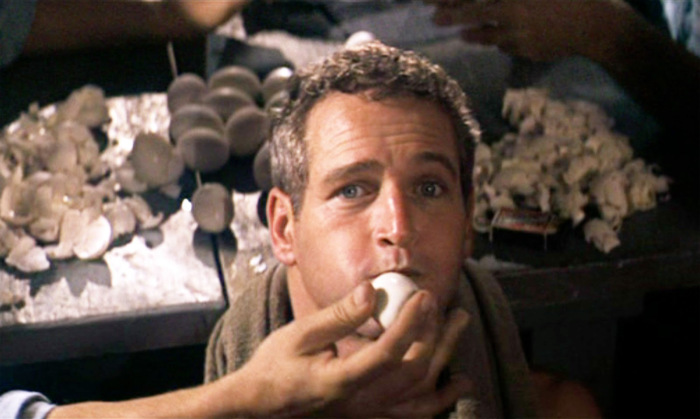 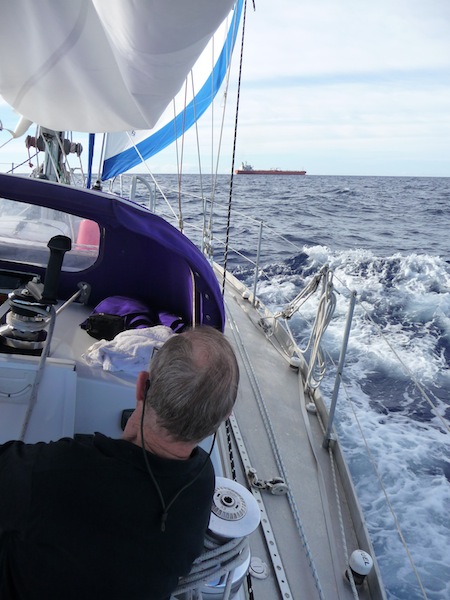 Phil “No Targets” Cavanaugh finally spots one dead ahead 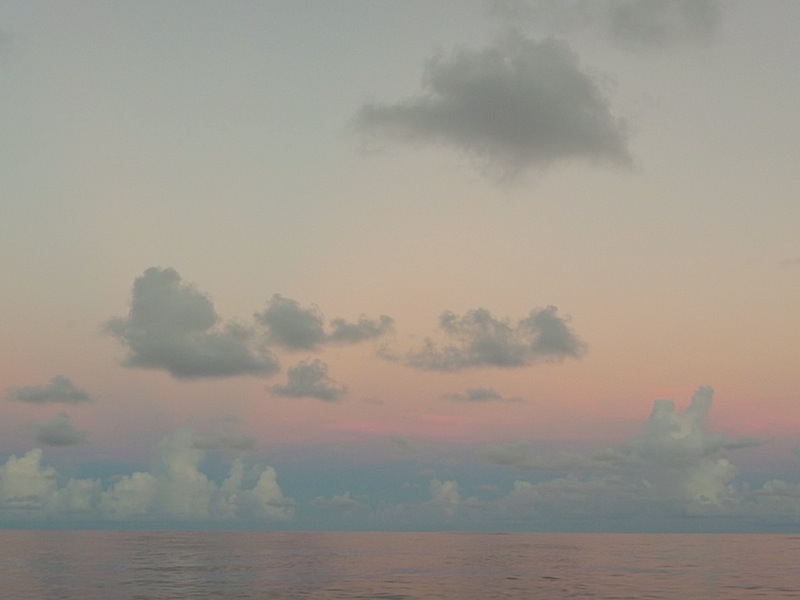 Sunset clouds to the east 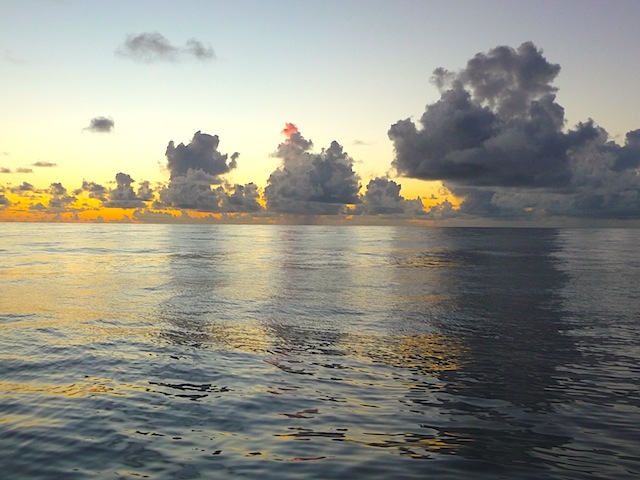 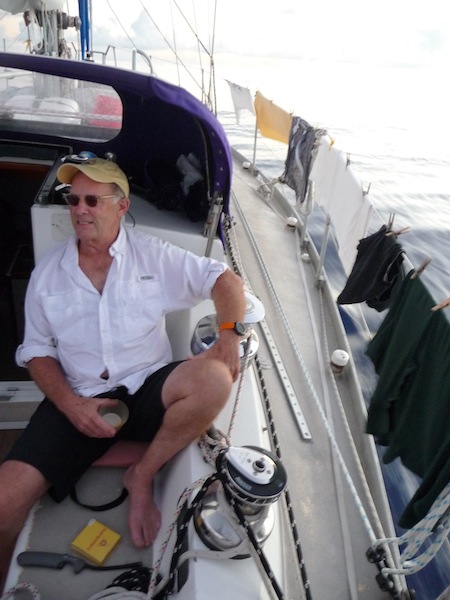 Thursday was laundry day. The reason Phil looks clean is because we humans bathed too, and reveled in fresh-water washdowns up forward on the bow. This was probably the most pleasurable part of the whole trip 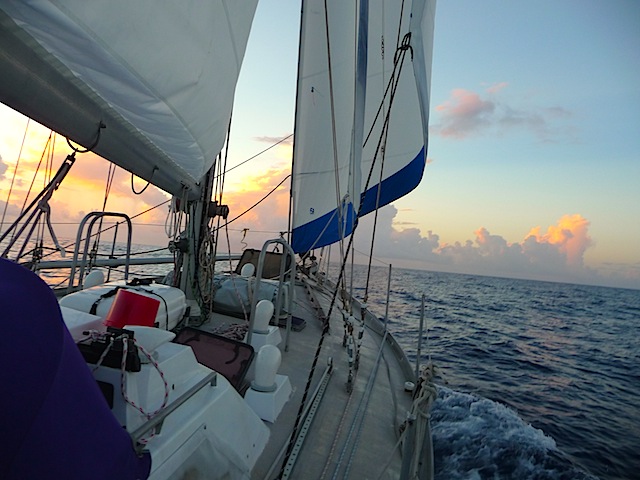 At last on Saturday, our last day out, we were able to crack off the sheets a bit

Lunacy‘s home base this winter is at Captain Oliver’s Marina, in Oyster Pond, which is on both the Dutch and French sides of the island. She was last here six winters ago and is very happy to be back. 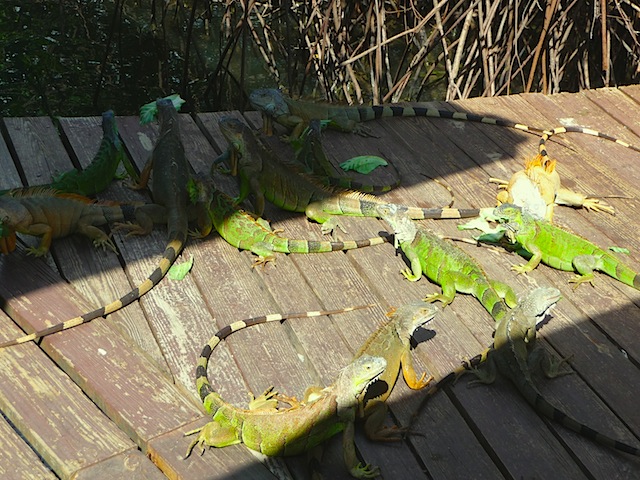 And it seems the iguanas are happy to have her back.