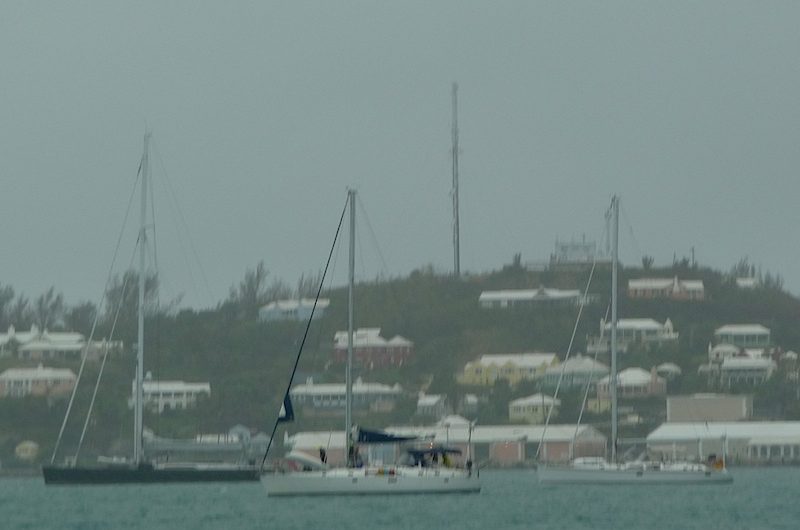 Right now I’m sitting out my second gale-force WX feature since arriving here last Saturday morning. I had had some hope of getting out before it arrived and taking off Wednesday afternoon as soon as all my crew were onboard. A few boats left on Monday, bound south for the islands, and one took off Tuesday, but when that one came right back less than 24 hours later, saying their weather-router had threatened to disown them if they didn’t turn around, I could see the writing on the wall. No choice but to wait for this gishy low-pressure cell grafted on to a front to move through, and the plan now is to leave tomorrow morning, Saturday, exactly seven days after I arrived here.

This morning we had some excitement as Lunacy leaned away from one big gust of wind and started slowly dragging her anchor. It seemed then to stop dragging and hold again, but we didn’t have that much room behind us before we’d start hitting things, so we didn’t take any chances. With two crew aboard it was relatively easy to pick up the anchor and get underway in the howling breeze; singlehanded it would have been a serious challenge. As long as we were relocating, I reckoned we should find better shelter, so we moved from the usual yacht anchorage just east of Ordinance Island to a protected spot between Saint David’s and Smith Islands all the way across the harbor, from whence we have a good view of the big-boy yachts who all came in last night and anchored in the Powder Hole (see image up top).

Soon afterwards it came on screaming again like demons, but with heavy horizontal rain and big-time angry lightning bolts cracking directly overhead. The first close strike sent me jumping down the companionway like a whipped puppy, and we immediately took precautions and stuffed our personal electronics and the ship’s handheld GPS in the oven for safe-keeping. 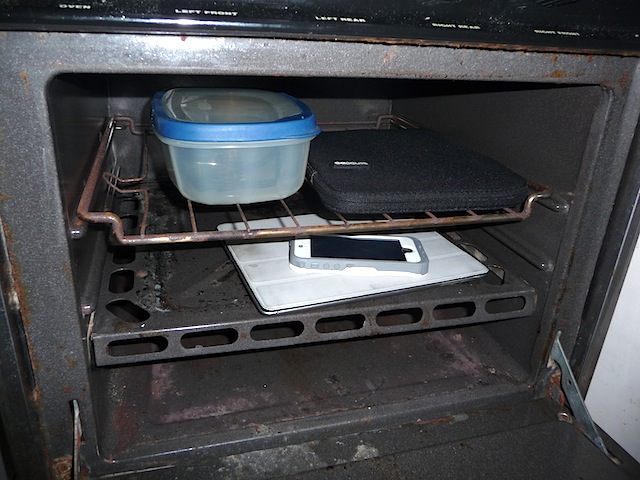 Soon after the rain and lightning stopped I hopped into the dinghy to bail it out and found a needle fish that had accidentally jumped aboard and couldn’t get out again. Unfortunately, it died before I discovered it. 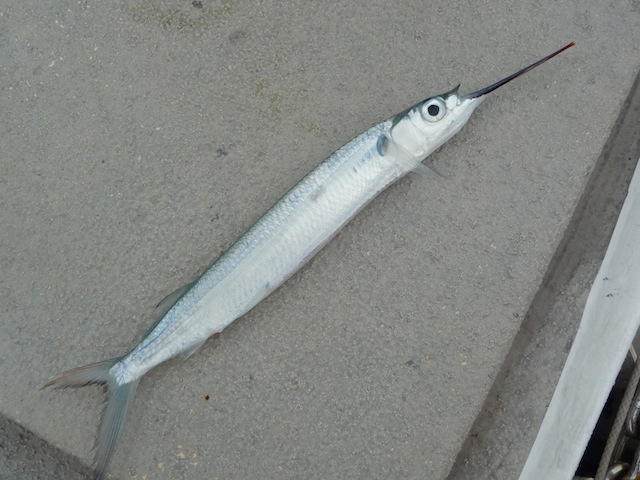 I suppose the fish is a metaphor, right? Though I’m still trying to figure out what it represents. I’m also wondering why its needle is below its mouth rather than over it. 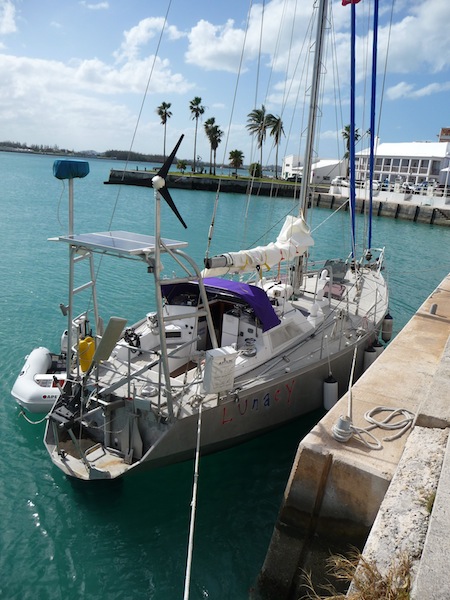 While waiting on this weather, I have of course been fixing things. On Monday I came to the wall just east of Dowling’s fuel dock so I could get a mechanic aboard to consult about the engine-alignment situation. A young man, Jason, from Powell’s Marine, agreed with my diagnosis that the engine was now more-or-less straight again, and that the engine mounts were loose, and with some fancy wrenches he had we managed to get everything tightened up again. I also replaced the luff-slide straps on the mainsail headboard after filing the edges down a bit.

Being on the wall was a big nostalgia trip for me, as the last time I laid here, in this very same spot, was in 1995 aboard Crazy Horse. I was here three weeks then, waiting on parts and fixing all sorts of broken things, and met all sorts of people. One of them was a young fisherman named Troy, a gentle affable soul, who was always pointing out one of his fishing rivals around the waterfront and exclaiming: “I see you, spy!”

Right after I tied up here on Lunacy, I was thinking of him, repeating that phrase to myself, and soon afterwards came out on deck and found myself talking to Troy, the current version, 19 years older than last time I saw him.

A big part of waiting on weather in Bermuda is finding about what’s going on with other boats, and yes, I have learned a thing or two since last I posted here. Starting with Adesso, the boat I mentioned before that was apparently in distress when we came in. Turns out she was on delivery, from Padanarum, Massachusetts, with an experienced delivery crew, Nigel and his partner “Miss” Kitty, and they had all kinds of trouble getting here. Bizarre electrical and engine problems, a fuel transfer in mid-ocean from a passing ship, a faulty autopilot, and then Nigel fell and badly injured his back and Kitty had to hand-steer for over 80 hours to make it here. How Adesso gets the rest of the way south seems an open question, and the owner is now on the scene trying to sort things out. 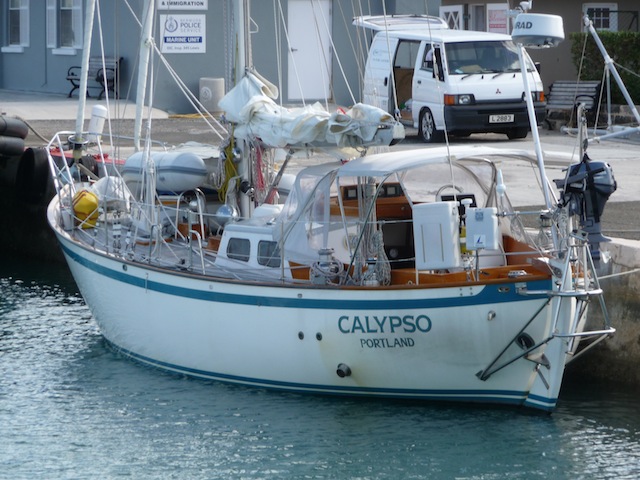 This is Calypso, a Saltram cutter that once belonged to Nick Nicholson, of Practical Sailor, who coincidentally I first met while living on Crazy Horse and was the one who first showed me Lunacy back when I bought her. Calypso and Lunacy (then Star Cruiser) are old buddies and sailed in company a bit while circling the world in their previous lives. Calypso (she’s also the boat that left Tuesday and came back Wednesday) now belongs to Laurie Dobson and Bob Hudson 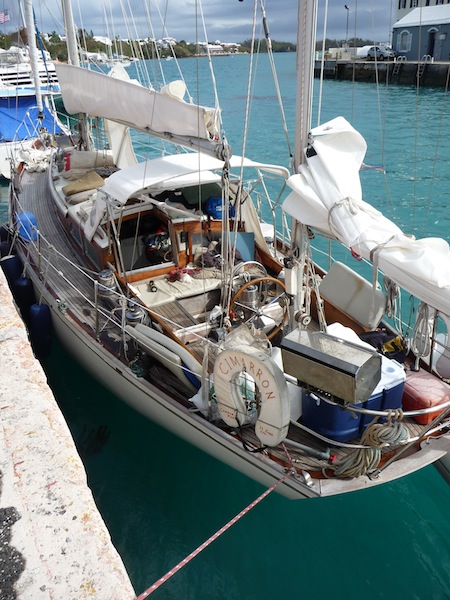 This is Cimarron, a fine old wood yawl that was sailing in company down from Maine with Calypso. She was caught out in that last piece of weather that came through here on Sunday and got roughed up a bit before making it in on Monday 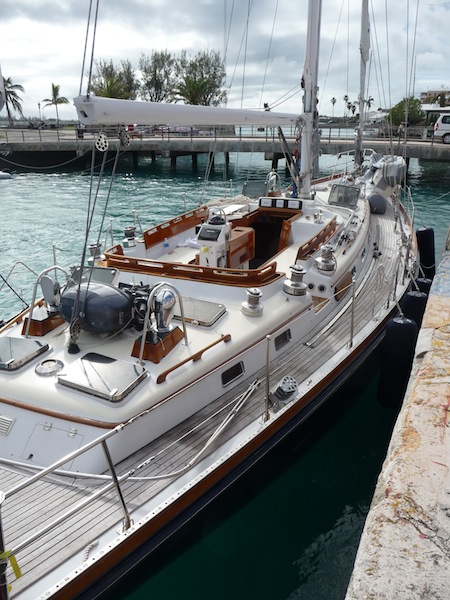 This is Galadriel, a big sloop with a two-man delivery crew that also got caught out on Sunday. She got knocked down, with lots of water coming below through her companionway, and now her interior cushions are spread out all over town drying out 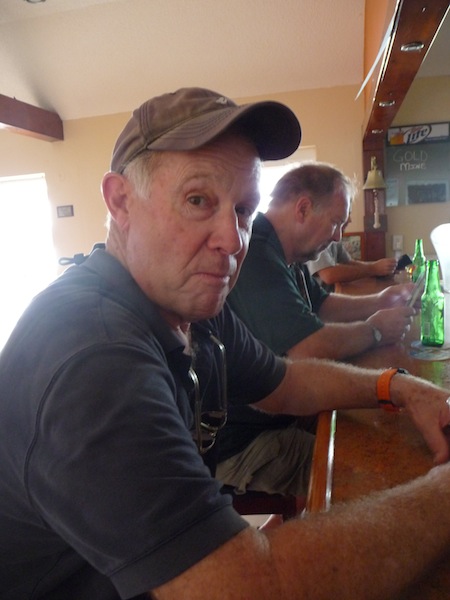 Last but not least, this is my crew (Phil Cavanaugh in the foreground, Peter Nielsen in the background) practicing drinking beer at the St. George’s Dinghy Club

UPDATE: We just moved the boat again! The wind has shifted and subsided and now we’re back on the wall by Dowling’s, waiting to head out tomorrow first thing.