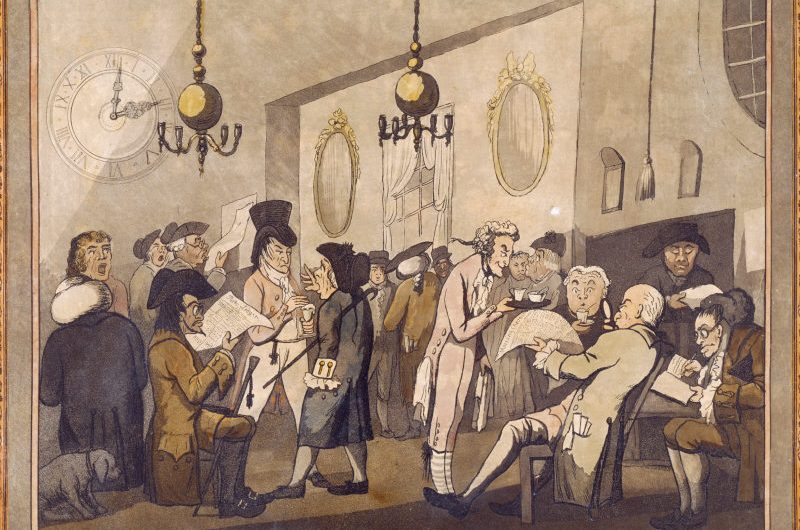 As I may have mentioned, I am in the midst of getting Lunacy ready for a run down to the W’Indies. This is always a fraught process, what with the normal anxieties of worrying about whether the boat is truly ready to go offshore, putting together crew, and watching the unruly fall weather unfold. Historically for me this anxiety has always been compounded by my fussy insurance company, ACE, which insists on vetting my crews and making me fill out lots of forms before they’ll give me an endorsement for a passage to the Caribbean.

Marine insurance, of course, is how the whole concept of insurance first got started. Hedging against the potential loss of a vessel and its cargo is a financial game that dates as far back as the ancient Greeks and Romans and was institutionalized in its modern form as early as the late 17th century in Edward Lloyd’s famous coffee house in London (see image up top), where shipowners, merchants, and skippers all gathered together to mull over the perils of ocean-borne commerce while getting hopped up on caffeine. As such, it is fair to say that marine insurance has played a very important role in the development of our global economy, but in the context of recreational bluewater cruising it is another animal entirely.

After all, what is it exactly that an insurance company sells to you? The answer, plain and simple, is fear. When you buy a policy what you’re really doing is making a bet that your own vessel will sink, because you’re afraid it will. This is a smart move, I suppose, when you’re talking high finance and need to protect a big investment, but when you’re talking about a boat that you sail with friends and family it has always seemed to me to be inappropriate. Bad luck. Almost evil, frankly.

When I first went offshore in a boat I owned myself, in my old Pearson Alberg yawl Crazy Horse, I looked into buying some bluewater insurance and the only quote I got was ludicrously high–$3,600 a year to cover a boat I’d bought for only $28K. This was in the mid-1990s, remember, back when I could live on my boat and cruise around full-time for only $10K a year. I did just that for over two years, without any insurance at all, and earned enough not paying premiums to stay out cruising for many extra months.

Back in those days no one ever asked you if you had insurance, and after I made the decision not to buy any I never thought about it again. But now most marinas and boatyards everywhere in the world absolutely require that you have insurance, and quite often they do insist on seeing proof of coverage. Some people I know have solved this problem by simply forging insurance certificates, which is not that hard to do. All you need is a computer and a printer. Others I’ve met buy common coastal policies, so they have an honest piece of paper to show off when necessary, but then “self-insure” when they go offshore, which fact they fail to mention to the foreign marinas and boatyards they visit.

When I first bought Lunacy back in 2006 I looked into insurance and bought a policy from ACE that cost $2,000 a year, this for a boat for which I’d paid $115K, which seemed fairly reasonable. When I was ready to take her offshore in 2008 they wrote me an endorsement for the Caribbean, for which they charged an extra $1,300, and also pestered me with forms and spurious requirements regarding the passage there. Over the years these premiums have steadily increased (though the pestering has never decreased), and when the last boost took my annual “fear payment” (as I think of it) to over $5,000, before the offshore and Caribbean endorsements were factored in, I knew it was time to do some shopping.

On doing some research I realized just how badly I was being gouged by ACE. Friends with boats just as old as mine (1985), with about the same value, are paying less than $2,000 a year for coastal coverage in the United States. But getting a new policy that would allow for a trip to the Caribbean wasn’t easy. I was hoping, for example, to get coverage from Pantaenius, which now writes policies for U.S. boats and is the recognized premiere insurer for offshore cruising vessels, but they wouldn’t even give me a quote. As was the case with Crazy Horse, it seems Lunacy is too old and cheap to be of interest to many marine insurers.

For a while I was thinking I’d have to become a forger or a self-insurer to go south this year. I told one broker what I really wanted was coverage while in the Caribbean, with exclusions for the passages back and forth, but was told in response that no insurer would ever agree to that. Which seems crazy to me. If I was an insurance company I’d jump on a deal like that. I was also thinking I might cancel my ACE policy, sail down south, and then buy another local policy in the Caribbean and cancel that in the spring before sailing north again.

Can you guess which one I went for?

Meanwhile, what I’m really stressing about is the weather. Of course. Right now I’m waiting for this low that’s sitting just south of New England to go away so I can sail Lunacy down to Newport. It’s a pretty impressive system. The UNH Marine Lab Field Station here in Portsmouth was reporting gusts to over 60 knots as of 9 this morning. 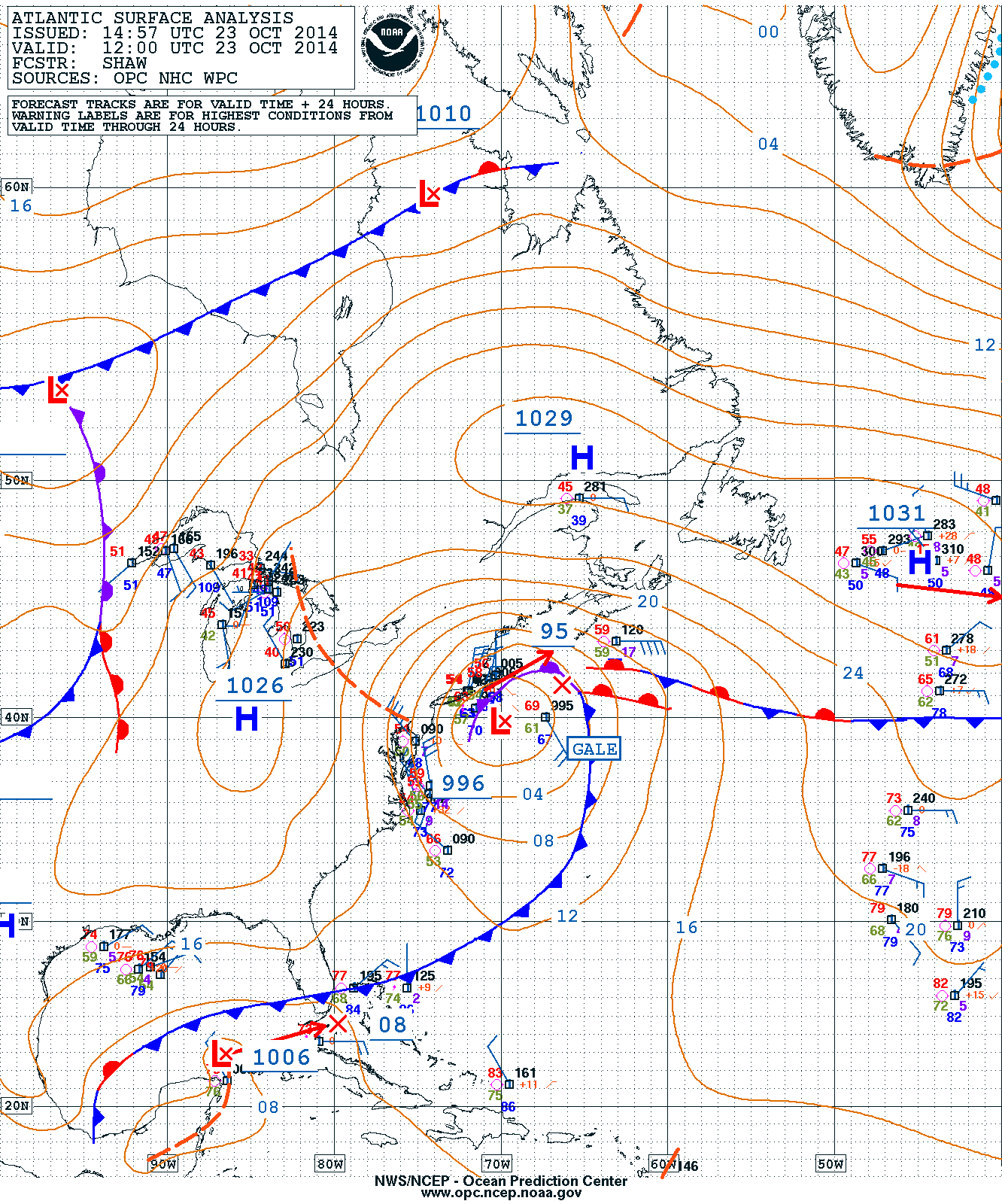 I’m hoping to leave for Newport tomorrow, and then depart Newport for Bermuda on Monday. Right now that seems feasible… but that assessment, as always, is subject to change.

Gaming the weather this time of year really is like playing Russian roulette. It seems there’s no way to get all the bullets out of the chamber before you pull the trigger. One thing I’m wondering now is whether it’s good luck or bad luck for me that both places I’m going, Bermuda and then St. Maarten, just got pasted by the same hurricane.

You may recall my friend and erstwhile shipmate Jeff Bolster, who has been taking his Valiant 42 Chanticleer south to the W’Indies the last few years. He’s tried the sail-south-from-New-England strategy and the sail-down-to-the-Chesapeake-first-and-then-sail-south strategy and found both wanting. So this year he developed a whole new strategy: he sailed Chanticleer out to Bermuda in August and put her up on the hard. Come December he was then planning to launch her again and sail down to the Caribbean.

That was seeming very clever until Bermuda took a direct hit from Gonzalo last week. For four days Jeff couldn’t get through to his boatyard in Bermuda to find out if his boat had survived. Then finally he received this happy snapshot of his pride and joy: 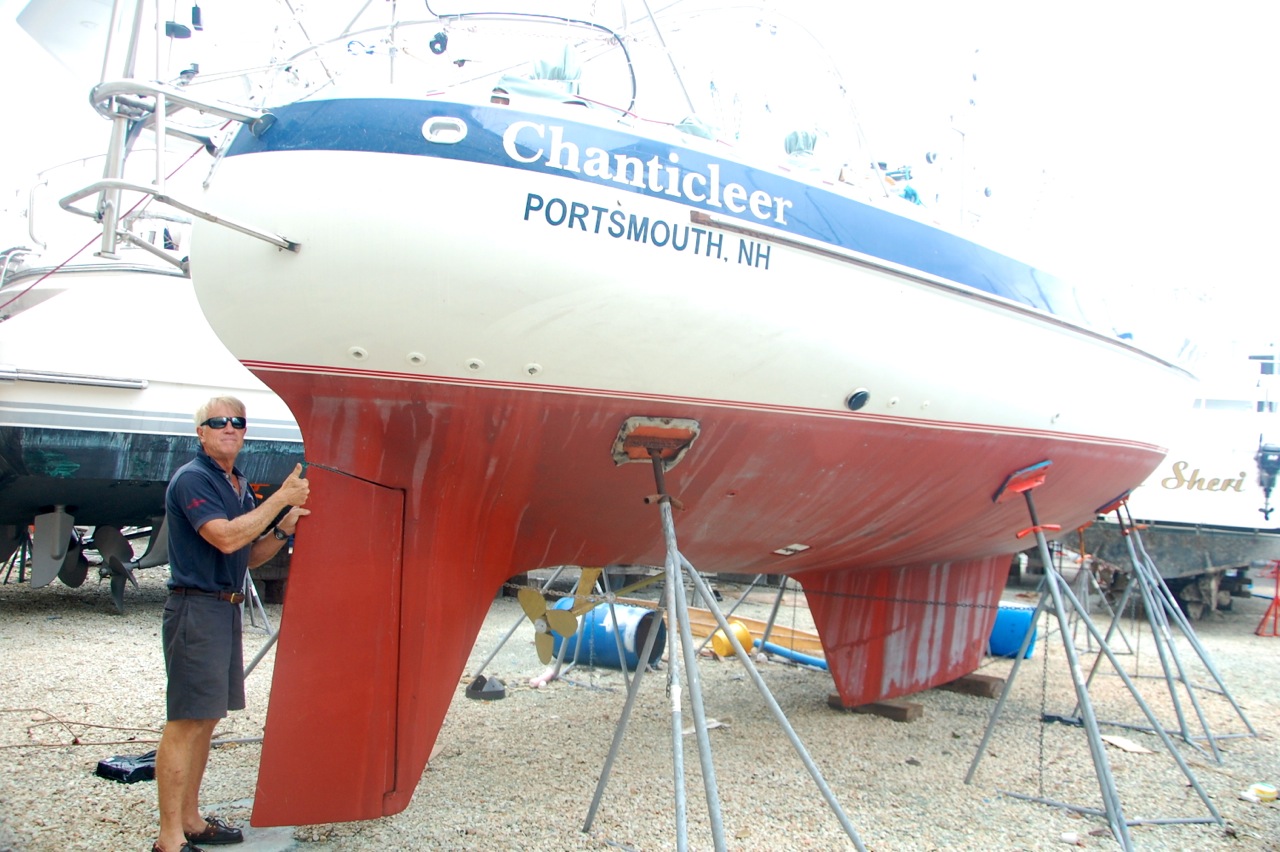 Safe and sound. But many other boats in the very same yard (in the Dockyard, on the island’s West End) weren’t nearly so lucky. 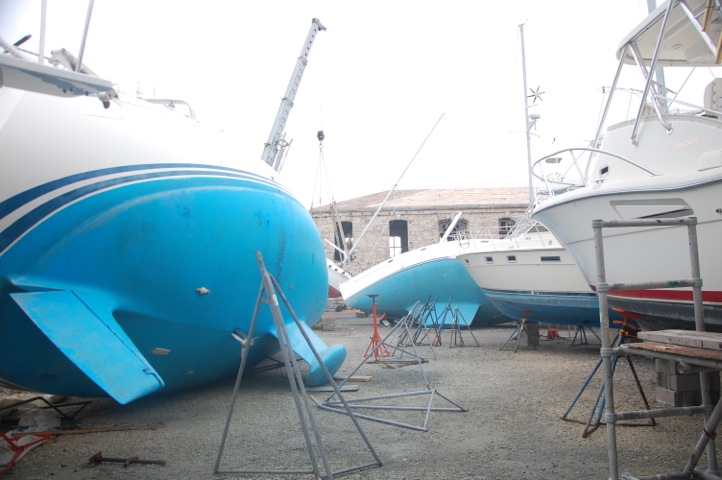 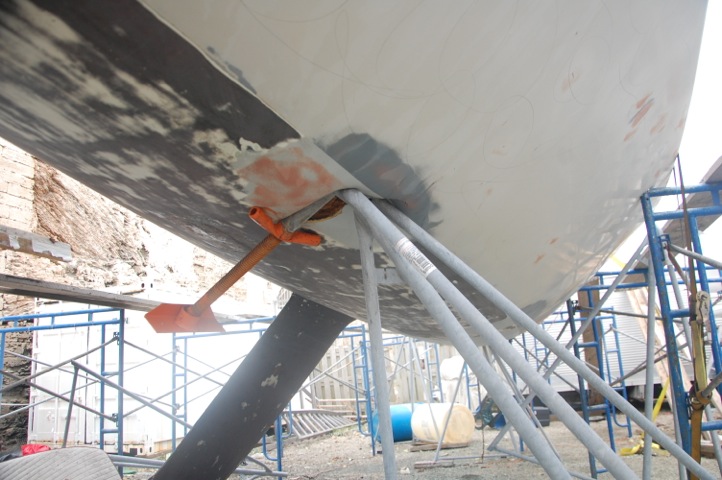 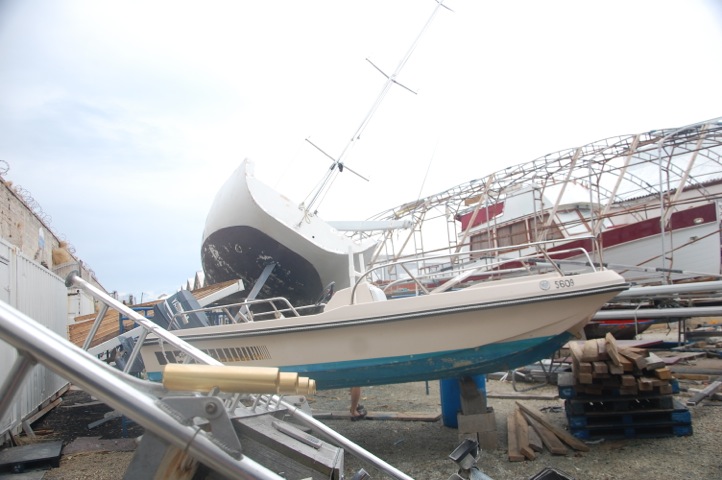 So it seems Jeff really did dodge a major bullet there. I was wondering what his insurer thought of his new transit strategy, and he tells me they did specify a “Windstorm Deductible” of over $17,000 before giving him permission to store his boat in Bermuda during hurricane season.