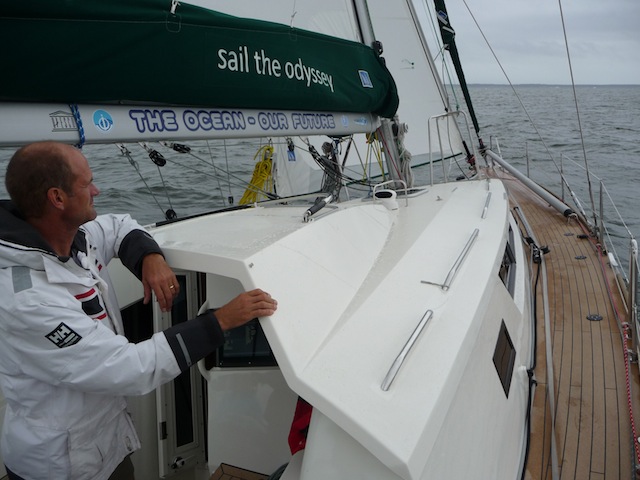 Day two of this year’s test-sailing program looked to be a bit snotty weather-wise, with the forecast early on showing wind gusting to 30 knots, rain, and a good chance of thunderstorms. Great conditions, in other words, for trying out the new Garcia Exploration 45. As things turned out, the weather was actually a bit more moderate than that, but we still enjoyed sporty conditions out on Chesapeake Bay during our first test sail, with the wind blowing about 20 knots true.

We sailed the whole test with two reefs in the Garcia’s mainsail and tried out both working headsails. I was little surprised to learn the boat doesn’t have a true cutter rig. You can either sail with just the staysail rolled out (as in the photo up top), or with just the jib out, but not with both. Strictly speaking, I guess that makes it a “solent rig.” You can also fly a bigger Code-Zero-type headsail on a continuous-line furler, or an A-sail in a sock or on a furler, from the very beefy bowsprit. 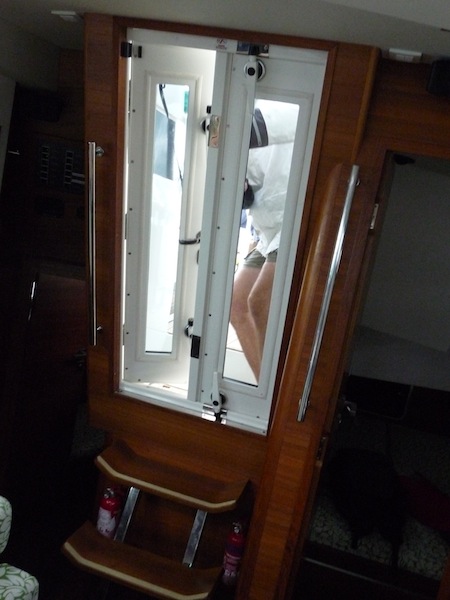 One nice heavy-weather feature on this boat is the super-strong heavily insulated companionway hatch/door that can be dogged down tight for maximum security. Right here is the part of the test where Brad Baker and Pete McGonagle of Swiftsure Yachts closed me in down below so I could experience how quiet the interior is when things are boisterous outside. And yes! It was very peaceful in there 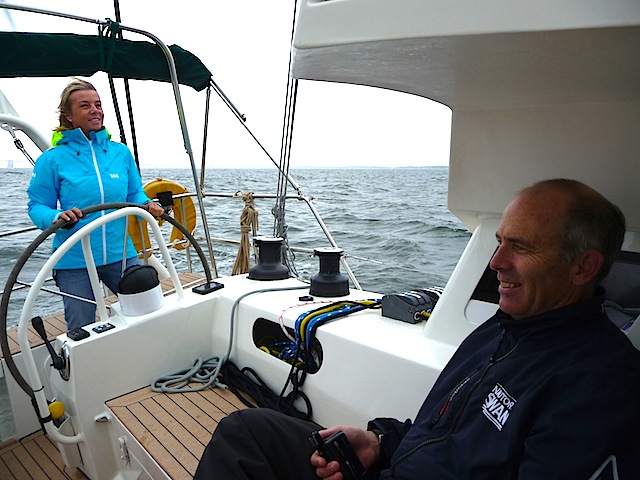 That’s Zuzana Prochazka on the helm and my compatriot from SAIL, Adam Cort, cowering in the shelter of the hard dodger. With her twin rudders, the boat has a very easy helm. Very soft, but still accurate. I guess you’d have to pretty much put the mast in the water to load it up much. One issue for Zuzana, however, was that she could not see over the tall coachroof when standing behind the wheel. She had to steer sitting out to one side or the other to get a clear view forward. Even for me, at over six feet, dodging small obstructions like crab pots was hard when steering from the cockpit 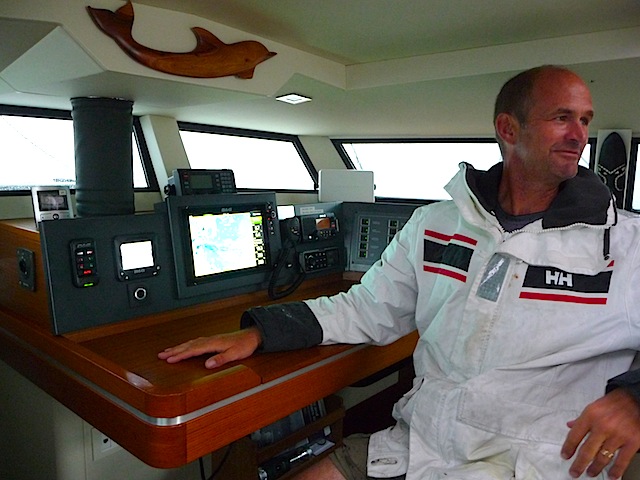 This is where you want to be when dodging lots of pots, or when it’s pouring rain out, as happened at the end of our sail. From the forward-facing nav desk at the front of the deck saloon you have a nice clear view ahead and can both steer and control the engine. One thing I noticed was that the nav seat was the only comfortable place to sit in the saloon when our test boat was heeled on starboard tack. Subsequent boats will have a strong backrest on the bench seat on the port side of the table to ameliorate this 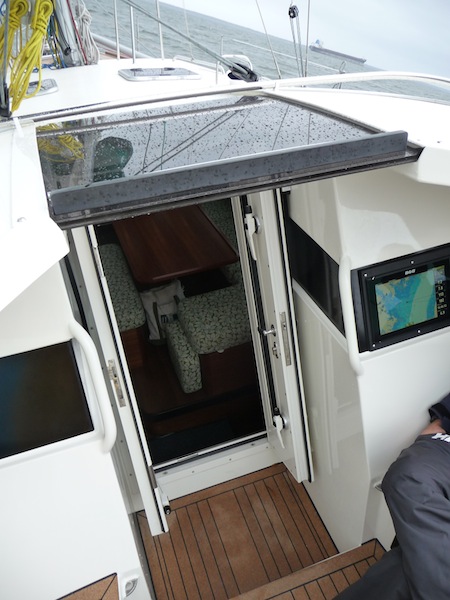 Here’s the bulletproof companionway as seen from the other side. The overhead sliding hatch in the coachroof is a nice feature when it’s real stinky out. Our test boat also had a frame for a canvas dodger that can be raised to increase shelter in this area. Note too the strong integral handholds and tether attachment points 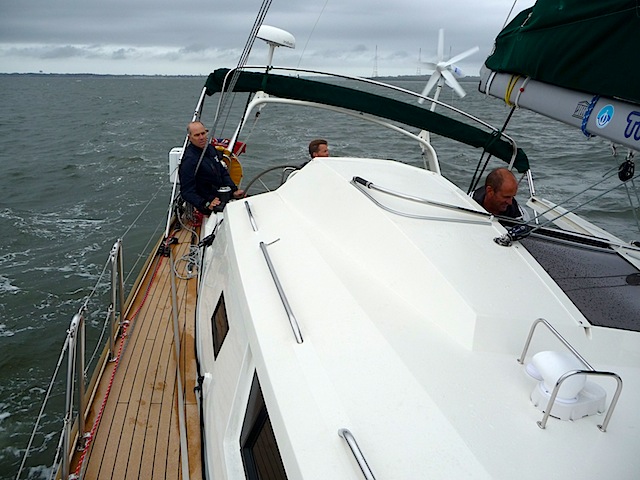 With the full jib and double-reefed main we hit speeds over 7 knots no problem and were very comfortable doing it. The boat has a smooth easy motion, which I have noticed is usually true of integral centerboard boats like this. My theory is this is because you are closer to the ballast, which is up in the hull in the bilges rather than many feet underwater at the end of a keel. I particularly liked that the side-decks are very secure. With lots of handholds on the high coachroof, moving forward while underway was a piece of cake

I was a little worried about my second test of the day, aboard the Seascape 27, a sliver of a sportboat that looked to be something of a handful in strong wind. My Slovenian hosts, however, were downright enthusiastic about our prospects, and the weather, in any event, actually moderated a bit after the big rain squall that went through during the end of my outing on the Garcia. By the time I got out on the Seascape, the true wind was blowing just 13-15 knots, though the seas were still a bit lumpy. 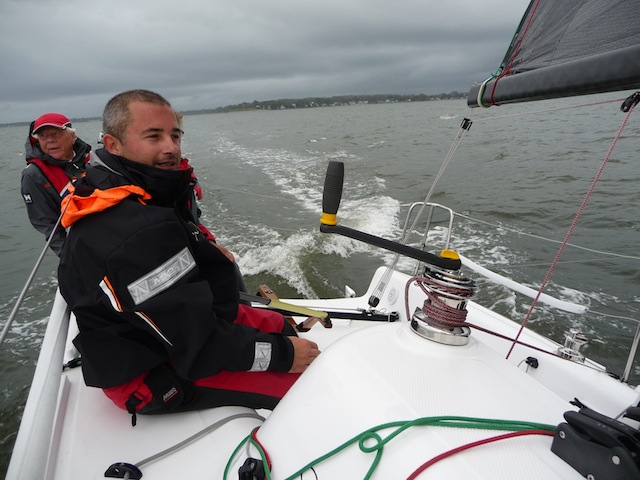 Here we are skating along at an easy 7-9 knots. I found the boat has a great helm–smooth, not at all quirky, and very accurate, which made it easy for me to scull the boat through the 4- to 5-foot seas 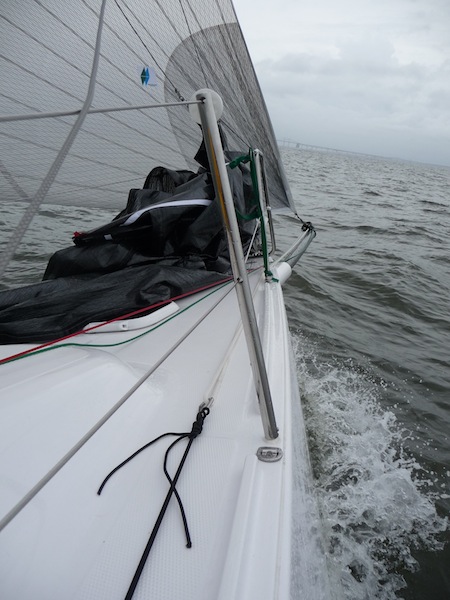 This is the reacher, as my friends called it, flying from the retractable carbon sprit up forward. It has a big positive luff and you can’t get too close to the wind with it. During the boat’s first test of the day, back when it was blowing 20 in the morning, boatspeed reportedly hit 15 knots under this sail 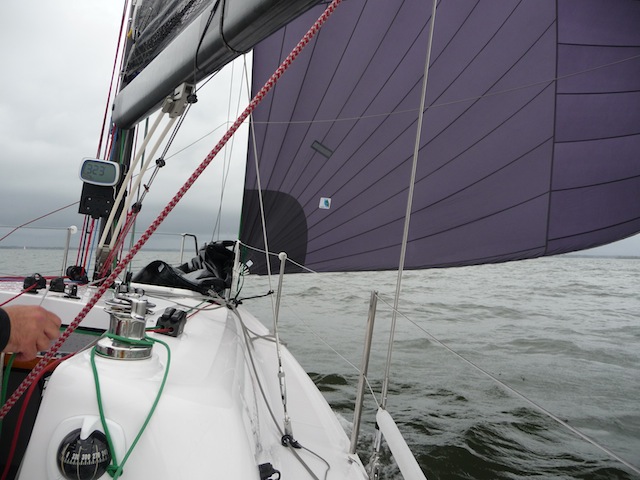 Later we switched to this big asymmetric spinnaker, which had stayed in the bag during the morning outing. We made 9-10 knots running off on a broad reach under this puppy 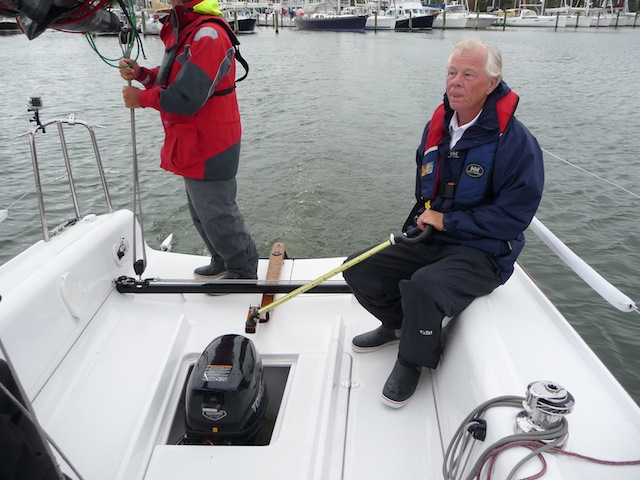 Heading back to the barn under power. The hideaway outboard well in the middle of the cockpit worked great in practice. The boat’s construction is not at all radical–just fiberglass vacuumed over a foam core, with some carbon in the center structure that carries the mast and keel loads. Plus the rig is carbon. Base price is just $70K 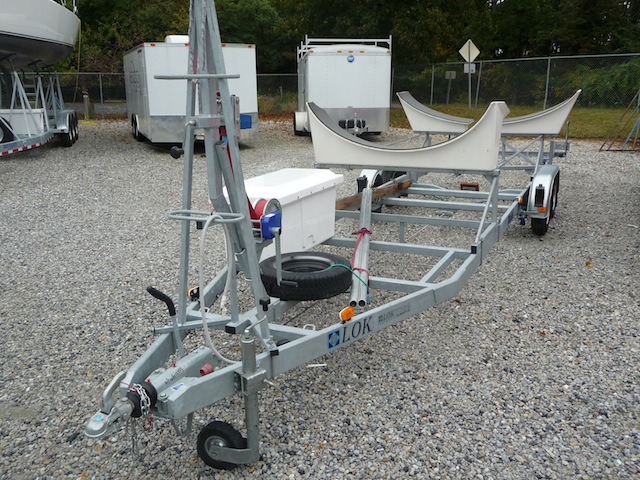 And here’s the trailer she rode in on. The boat has a swing keel, so can be easily hauled off to the nearest regatta. Full price with sails, electronics, and the trailer is about $120K

If you want to read more detailed write-ups on both these boats, keep an orb glued to future issues of SAIL. Meanwhile, I’m switching into offshore-passage mode and will soon start sailing Lunacy south for the winter, so if you want to read about that, keep the other orb glued right here.