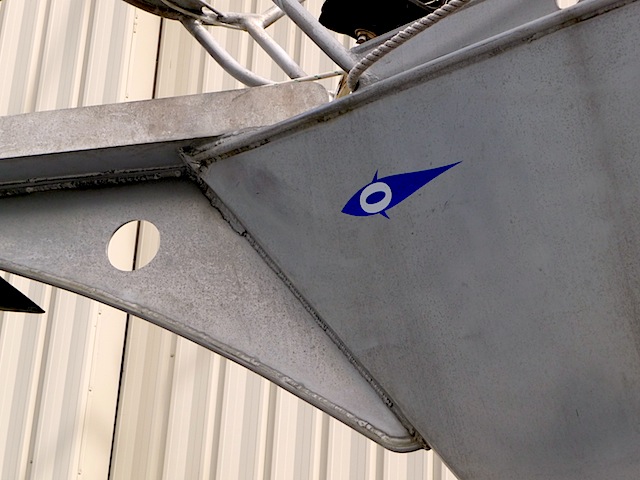 Lunacy was on the hard last week to get her bottom cleaned and some new paint put on before she goes south for the winter, and while she was out I finally made two changes I’ve long been pondering. First I cut a hole in the aluminum plate (the “bob-plate” I call it) that supports her bowsprit; second I stuck a pair of eyes on her bow.

The reason for the hole is that I really dislike the way the bob-plate sometimes makes the bow look like a clipper bow in profile. Not that I am inherently prejudiced against clipper bows, but I do think they look a bit silly and pretentious on common sailing yachts that are less than 60 feet long. They always remind me of those junky-looking Taiwan-built cruising ketches from the 1970s. I figured cutting a hole in the plate would break up that affect, and I think I was right about that. I’m rather pleased with the way it came out. 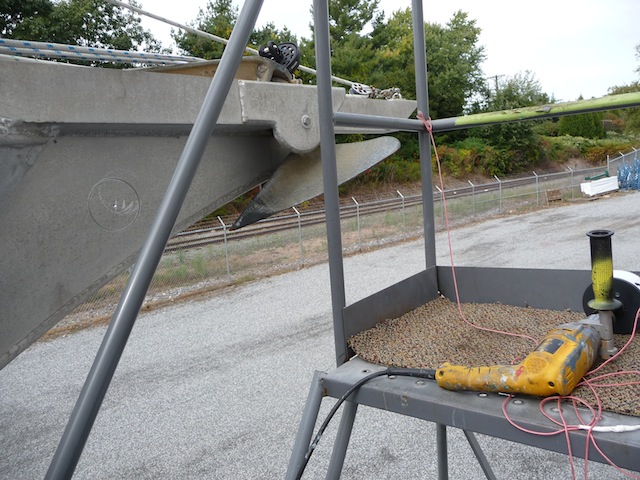 What I hadn’t counted on is how hard it would be to actually cut the hole. Unleashing a large hole saw on heavy aluminum plate is an extremely noisy and vibratory experience. You have to cut very slowly and carefully, or the saw jumps around all over the place (I broke one pilot drill bit very early on), and it takes so long your wrists feel like pulverized Jello by the time you’re done. 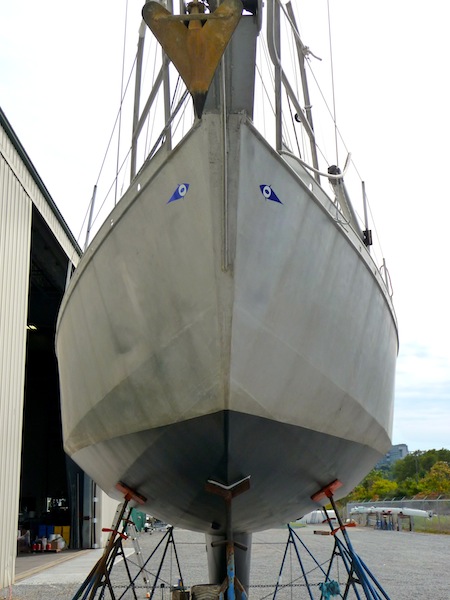 Sticking on the eyes was much easier. I used a pair of those fish stickers that fishermen stick on the bottom of their skiffs to attract their prey and added some letter O stickers laid on sideways to make the pupils. I’m not sure where the tradition of putting eyes on the bows of boats comes from originally, but you see them often in both Asia and the Mediterranean. People say you put eyes on so a boat can see where it is going and/or to ward off evil spirits, but I suspect it’s really just because it looks cool. It also really helps give boats a face, so we can anthropomorphize them all the more.

Eyes and hole were applied on Thursday, the boat was afloat again by Friday, and Clare, Lucy, and I went out for an overnight on Saturday to see how they worked. Here you see Lunacy‘s new profile in action off Great Chebeague Island: 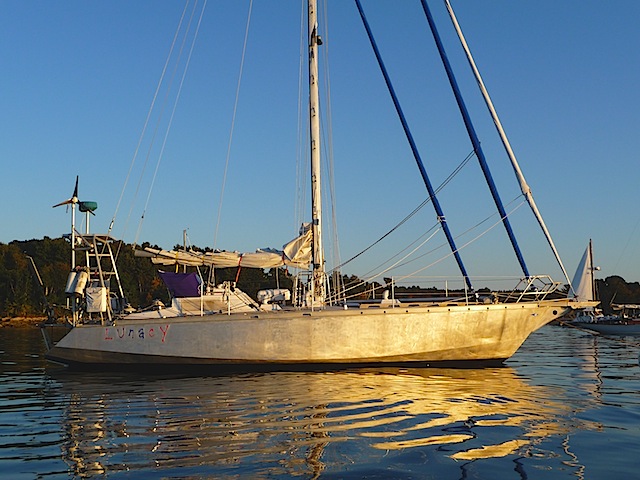 The eyes I think came out perfectly. They’re discrete, but noticeable. The hole maybe could have been a bit bigger, but I’m happy enough with it the way it is. So far the boat hasn’t gotten lost, hasn’t been mistaken for a clipper ship, and nothing evil has happened to it. (Knock on wood!)

While Lunacy was out of the water I also had her surveyed so I could shop around for a new insurance policy. My old insurance company was always a pain in the ass about me sailing offshore, and when they announced a major premium hike for this year I figured it’s time for a change. Pantaenius, a German insurer, has a great reputation for offshore coverage and is now covering U.S. boats, so I’m hoping I can work something out with them. 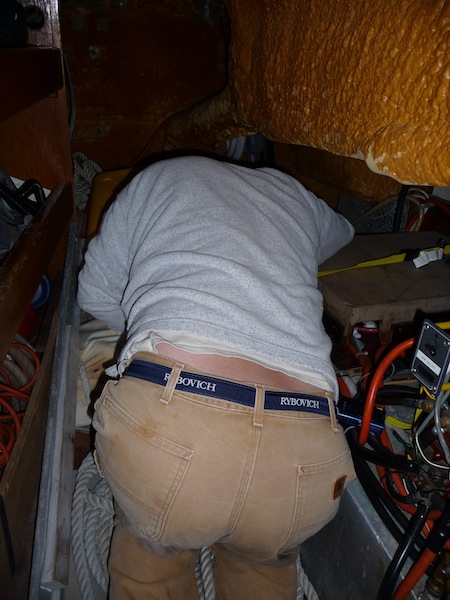 My old friend Mark Corke came to do the survey on Thursday and gave the old girl a clean bill of health. In the photo above you can see him at work in the systems space aft, looking for flaws and hiding from the hideous sound of the hole saw. 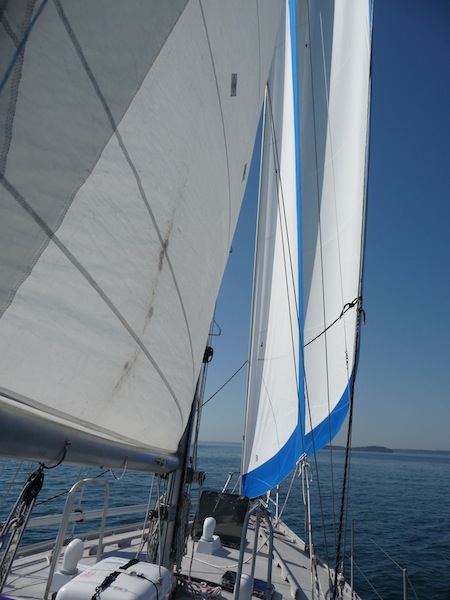 On Friday I also picked up some new sails from Doug Pope in Rockland, Maine. Here you see the new jib and and staysail flying in tandem as we sailed back to Portland yesterday. I had been stressing about this a lot, as the headsail sheet leads on Lunacy are a bit weird. Both the jib and staysail sheet to the same track, which up forward is slightly inboard of the shrouds. Getting them to work together properly while staying clear of the shrouds is a bit tricky.

To make it work with the old sails, the staysail had to be very high cut and was too small to be very useful on its own. With these new headsails, the jib is a bit higher cut, which helps it tack across the staysail stay more easily, and the staysail is much lower cut and quite a bit larger. So far they seem to be playing together nicely. 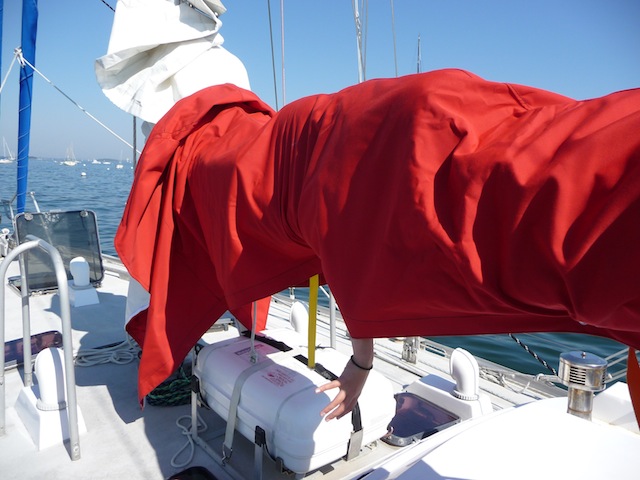 I had also been hoping to try out the new mainsail this past weekend, but it still needs some work. Daughter Lucy is very devoted to the old mainsail (she likes lying in its foot) and is worried about losing it. Here you see her communing with it under its sail cover. She only agreed to come out after I promised her the new sail would also have a foot with a shelf in it so she could lie in it too.