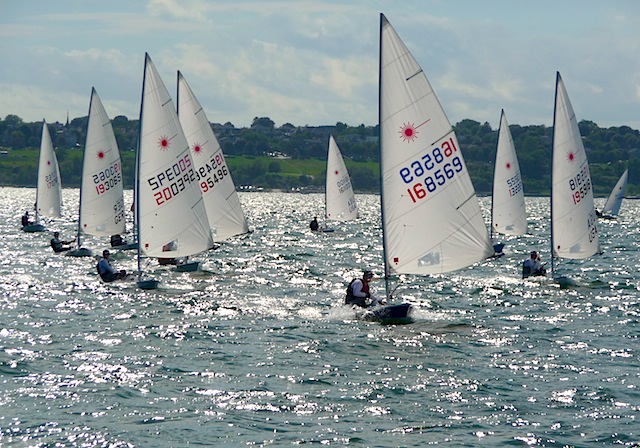 As is traditional, our annual Labor Day excursion got off to a late start. But after we finally dropped Lunacy‘s mooring pennant in Portland harbor on Saturday afternoon, we instantly found ourselves embroiled in the Laser Atlantic Coast Championship Regatta (see photo up top), which was quite exciting. As far as I know we didn’t actually get in anyone’s way.

If you were there racing that day and have a different opinion, please feel free to correct me on that.

Due to lack of time we didn’t get too far after we extracted ourselves from the race fleet. I thought Cliff Island would be a good bet, given the strong southerly wind and our desire to get in a walk before sunset, so we pulled in there and dropped anchor on the west side of the bay on the island’s north side, away from the overly crowded mooring field on the east side.

Now is as good a time as any for me to offer a small amendment to my first very informative post on this destination: i.e., it can get a tad rolly in here when there’s a strong swell running in from the southeast, as there was throughout our weekend, thanks to the doings, I believe, of Hurricane Cristobal, which had just passed by many many miles offshore in that direction. 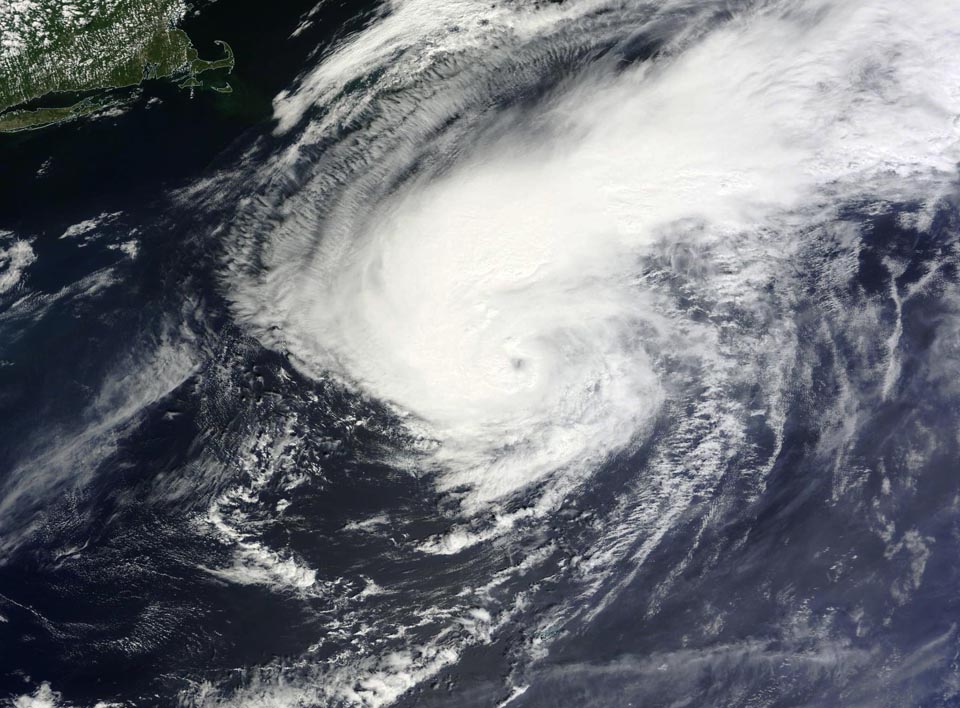 Cristobal in action the day before we headed out

Before we went ashore Lucy insisted on being hauled up the mast in the bosun’s chair, but didn’t want to go too far, due to the rolling motion of the boat. Which at least was one advantage to having anchored here. 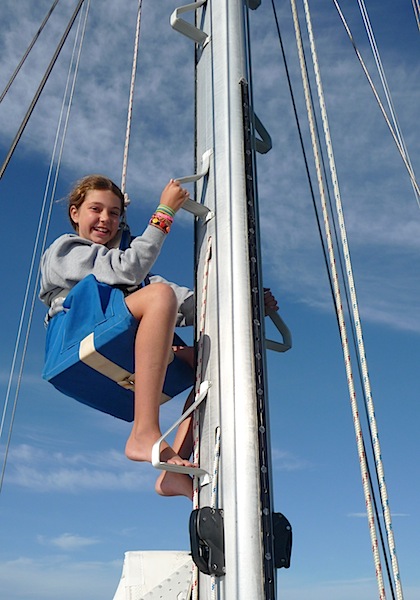 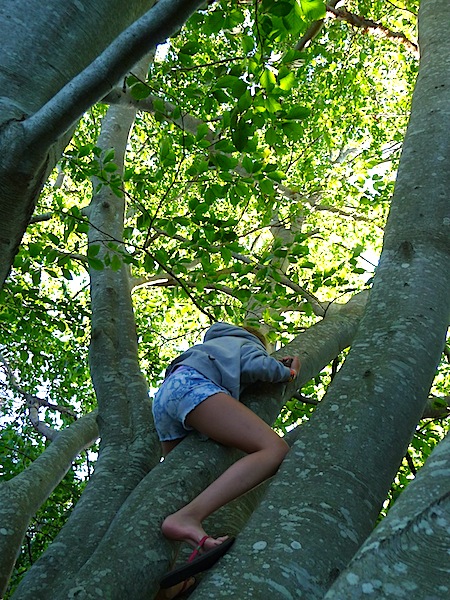 On shore our walk was immediately interrupted by yet another climb, this one up a tree, which was not rolling.

We ended up hiking the entire length of the island’s eastern spur. We first walked down to the south point, which has a great view of neighboring Jewell Island. Then Lucy suddenly suffered an energy deficit and refused to walk anywhere but back to the dinghy, so Clare sat with her for a bit while I walked up to the north point on my own.

This was a fantastic trail, leading right along the edge of a low cliff facing east, and I was about halfway along it when suddenly a dog appeared. A highly energetic one, a German shorthair retriever, wearing a yellow lifejacket and a weird electronic device on its collar. It ran in circles around for me a moment, then shot off up the trail in the direction it had come from. I followed after it, thinking I would soon meet it and its owner at the end of the trail on the north point. But when I got there, where the trail dead-ended in a lovely grassy spot bordered by cliffs on all sides, there was no sign of the dog. 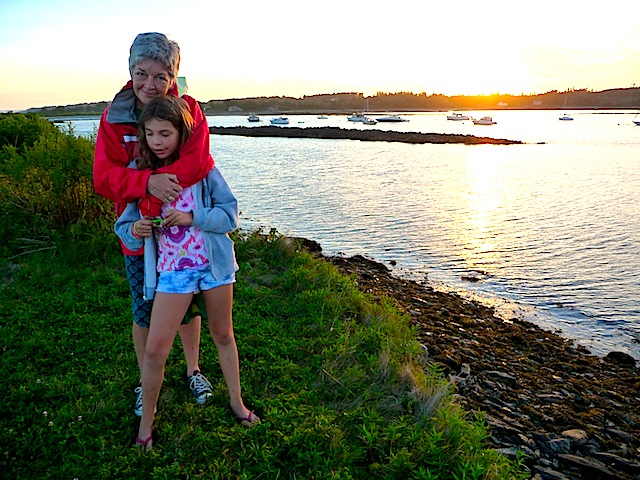 When I walked back to where Clare and Lucy were and reported I had met a strange dog from outer space that had disappeared into thin air and maybe they could help me find it again, Lucy suddenly became re-energized and was very willing to walk the trail. We didn’t find the dog, but I did snap a nice photo of Clare and Lucy standing on the north point facing west with the anchorage in the background. (See above, and please note the depth of field is skewed a bit. Those rocks to the right of the grass are actually at the foot of a 12-foot cliff.)

The next day, after another walk ashore, we sailed from Cliff Island up to the head of Quahog Bay, to the anchorage around Snow Island, where we planned to hook up with our friends David and Catherine, a pair of novice sailors who were out on their very first cruise together. They got there first and let us know by cellphone that they’d picked up a mooring with another empty mooring right behind it. 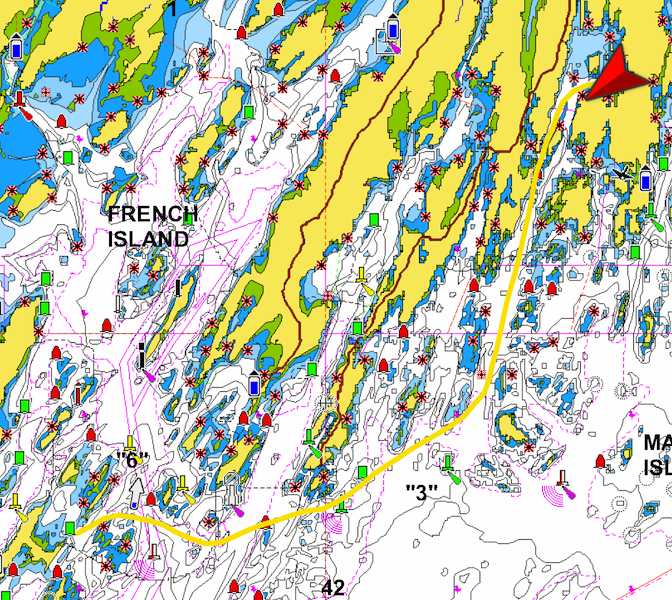 Our route from Cliff Island up to Snow Island. The wind was south-southwest, blowing between 20 and 5 knots, depending on our position and the apparent wind angle. We sailed the whole way and did the long DDW bit wing-and-wing without a pole 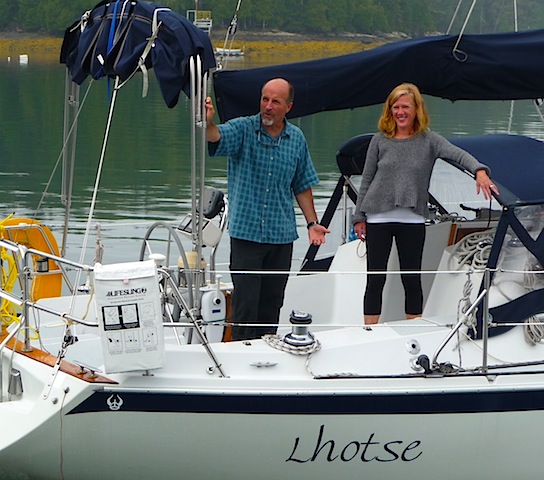 David and Catherine aboard their new (to them) Ericson

So we picked up that empty mooring, hopped in our dinghy, buzzed over to say a quick hey to David and Catherine, then dinghied all the way across the very large anchorage and up Orrs Cove to Great Island Boat Yard, where we hoped to visit the fabulous Wheelhouse Cafe so as to feed certain crew members who had been too seasick to eat lunch on the boat.

We were mortified to discover the cafe had gone out of business. But the boatyard, in spite of my warning that we weren’t on one of their moorings and that they were making exactly zero dollars off us, loaned us their enormous pickup truck so we could drive down the road to another spot. We were almost there when suddenly my cellphone rang. It was David, who had called to say the owner of the mooring we picked up had just appeared and wanted his mooring back.

Long story short: we aborted the cafe run, returned the truck, dinghied all the way back to Lunacy, only to learn the rightful owners of the mooring were Will and Halcyon on Squombus, a Regina 38, who I had met 10 years earlier at the Newport boat show, right after they bought their boat and were representing Regina Yachts in North America. 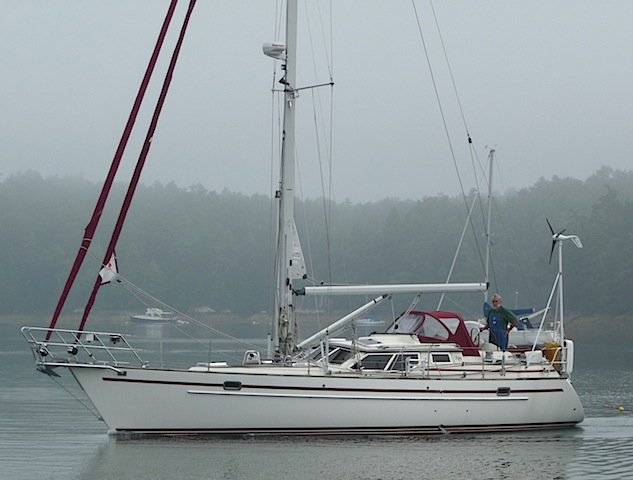 Will on Squombus the following morning. Regina Yachts now is also out of business, but Squombus is for sale, in case you’re interested

This is about the best outcome you can hope for in a situation like this, and I had a very nice time catching up with the Squombites after I moved Lunacy to yet another empty mooring. We also had a fine meal aboard with David and Catherine that evening, but next morning woke to very dense fog. 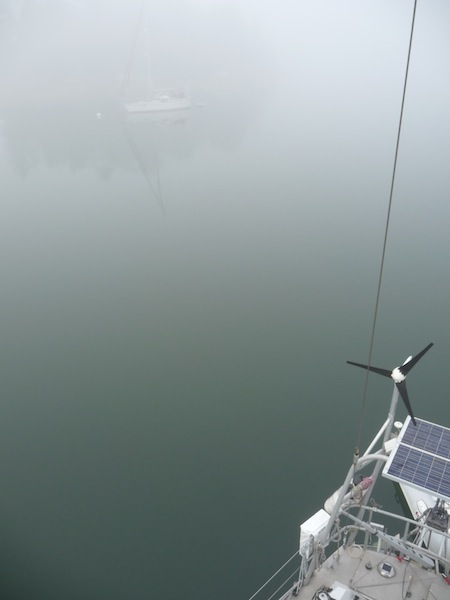 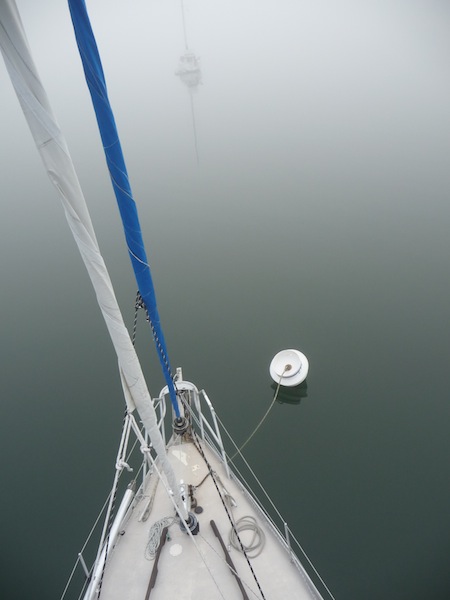 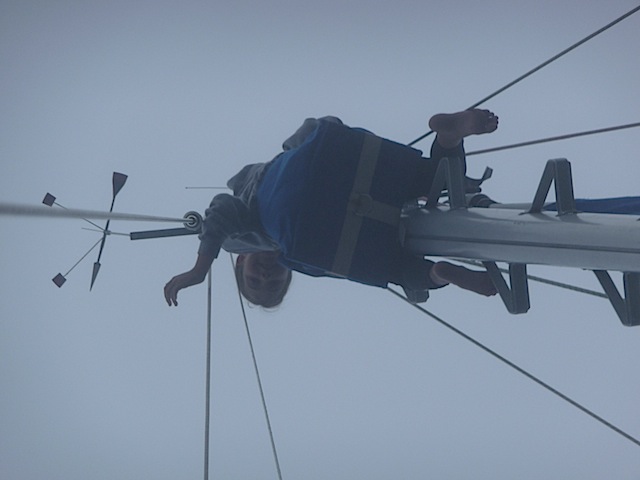 We amused ourselves climbing the rig and what-not until finally it lifted and then we started out back to Portland. 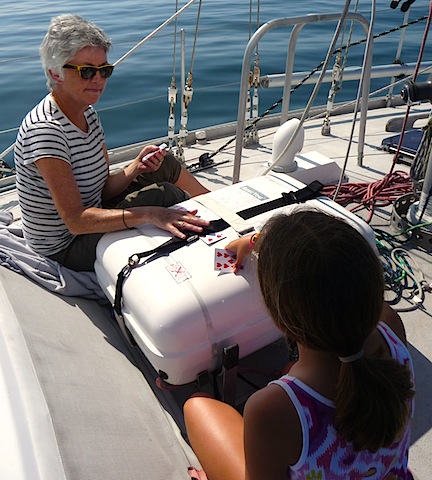 Alas, we saw not a shred of wind the entire way, and some crew members got so sick of motoring they had to resort to playing cards on the liferaft to amuse themselves.

POSTSCRIPT: About that mysterious dog on Cliff Island–we did actually see it again, the following morning, on a trawler yacht in the anchorage. I reckon it must have jumped off that cliff and run back to its owner, who was waiting in a dinghy nearby.