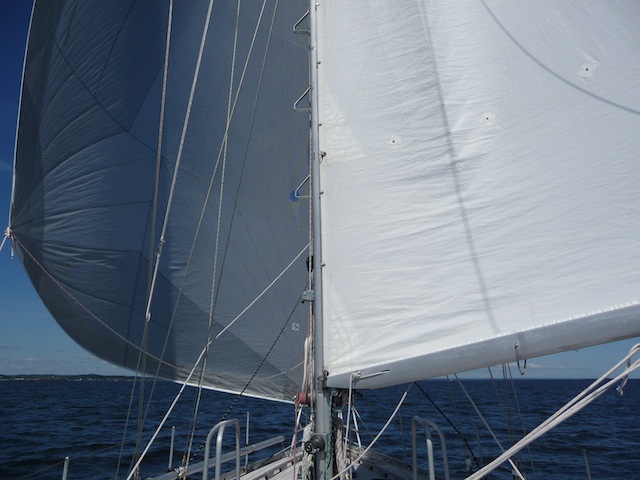 With children fortuitously exiled in sleep-away summer activities, my bride Clare and I had a chance last week to venture out on Lunacy for several days on our own. We originally thought we might visit the Damariscotta River, but heading out from Portland last Monday we were plagued by light air and had no reasonable hope of its increasing considerably in the days ahead. This is a problem that often confronts the cruising sailor: when the wind lapses do you simply switch on the motor and go where you wanted to go anyway, or do you sail more slowly and go someplace you hadn’t thought of?

We spent our first night on a mooring at Sebasco, on the eastern edge of Casco Bay, and by early afternoon the following day, as we were ghosting across the mouth of the Kennebec River flying the screecher and mainsail wind-and-wing (see photo up top), it became clear that the Damariscotta, two rivers further down the coast, would be out of reach without a strong dose of internal combustion. To my mind sailing more slowly is almost always preferable to the clamor and monotony of motoring, so I began pondering alternative destinations. 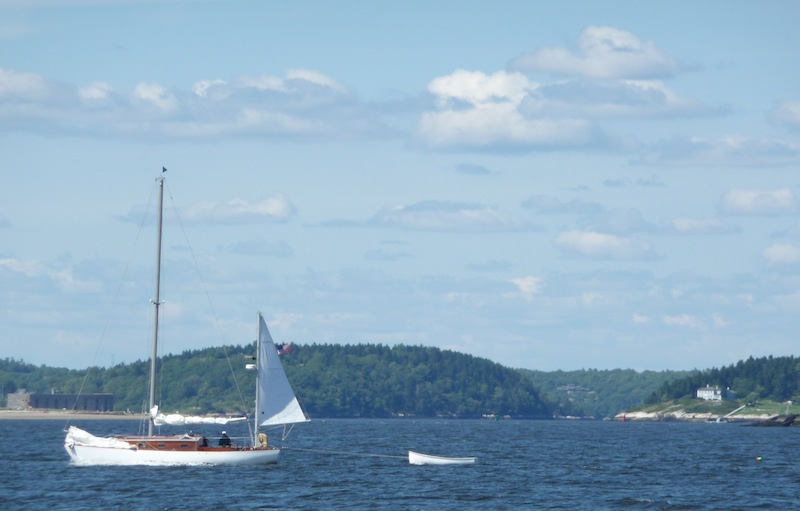 The mouth of the Kennebec River, as seen from inside Seguin Island. It is quite narrow, reaching just across from the fort on the left (Fort Popham) to the house on Gilbert Head at the south end of Long Island (once inhabited by my grandmother) on the right

Heading up the very next river, the Sheepscot, seemed an obvious ploy. Clare and I, in company with younger daughter Lucy, who was then just two months old, had gone all the way up the Sheepscot to Wiscasset in my old Golden Hind Sophie nine years earlier, but we hadn’t been back since. We had neither the time nor inclination to sail up to Wiscasset now, but I realized we could very easily visit Robinhood, just a short distance upriver off its west bank.

Having spent my boyhood messing around in boats at the mouth of the Kennebec, the Sheepscot, on its face, seems something like an alien planet. Where the Kennebec is tight and narrow, with tidal current sluicing through it at high speed, the Sheepscot is wide and comfortable, twice as deep as the Kennebec (with max soundings over 200 feet instead of 100 feet), and its current, though certainly noticeable, is neither dramatic nor prohibitive. There have been more than a few times when I couldn’t go somewhere due to over-powering current and so had to wait for the tide to turn in the Kennebec, but I don’t imagine you ever have such problems in the broader reaches of the Sheepscot.

In our case, we had the inbound current in our favor as we entered the river in any event, which turned out to be a good thing. For though the river itself may be user-friendly, the tributaries branching off it to the west toward Robinhood are less so. 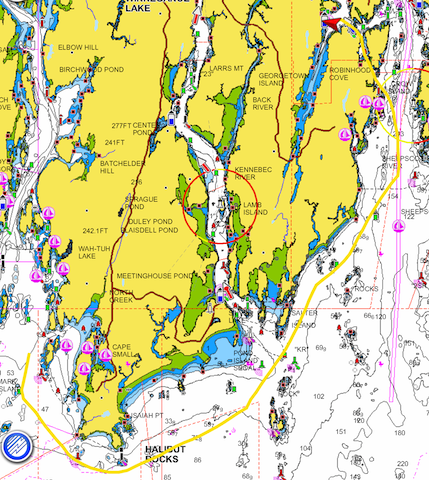 Our route from Sebasco around to Robinhood. As you can see, the Sheepscot’s entrance is much wider than the Kennebec’s, just a few miles to the west. We were sailing wing-and-wing, with no preventers or poles, all the way from just west of Seguin Island, where we made a slight turn to port, well into the mouth of the Sheepsscot, where we again turned slightly to port to head due north up the river. The water was very flat, and our screecher is surprisingly stable in this configuration 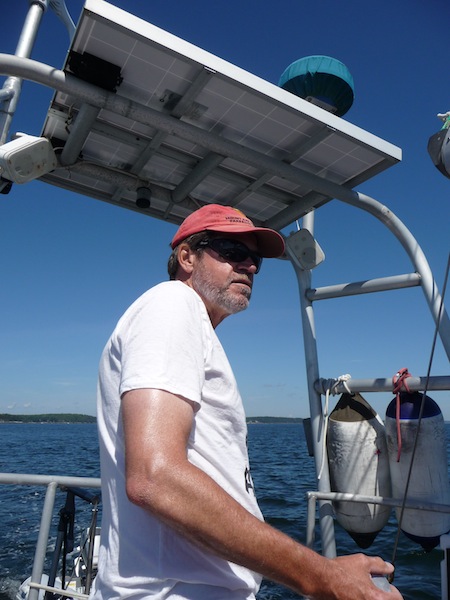 There are two to choose from. What is known as the Little Sheepscot River comes up first as you approach from the south and is very narrow with water gushing through as if shot from a firehose. The alternative, Goose Rock Passage, a little to the north, is wider, but still has strong current running through it. 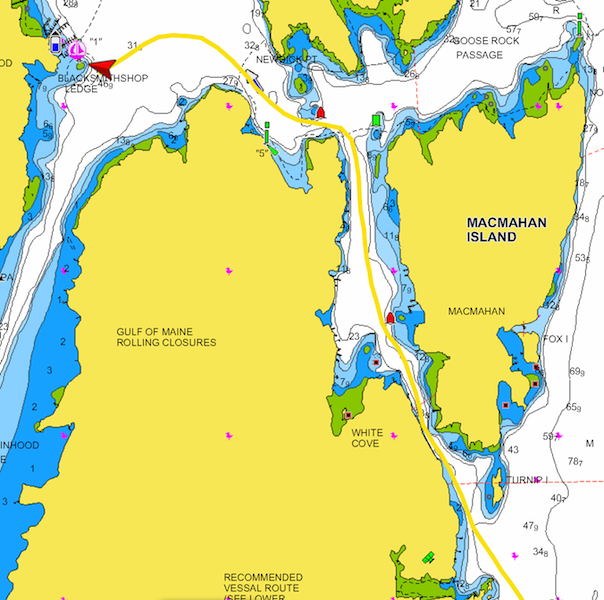 Our approach to Robinhood

Having the current behind us, we opted for the more exciting route and were quickly flushed out the “little river” into the broader reaches of Knubble Bay, which is first in a series of back-river tributaries that connect the Sheepscot to the Kennebec and emerge some 15 miles up the latter just across from the city of Bath. One of my earliest childhood boating memories is of riding this roller-coaster, most particularly the Sasanoa River, which features two thrilling choke-points called Upper and Lower Hell Gate, in a small wood sloop that belonged to my grandparents. I remember lounging on the bow, reading a book I think, and looking up to see a large whirlpool, literally a deep hole in the water, directly ahead. I recall screaming and sprinting in terror back to the safety of the cockpit.

In this instance we encountered no whirlpools, though we saw a few impressive rips, and landed safely just across the way at Riggs Cove, where Robinhood Marine Center is located. Beyond driving there once for lunch maybe 20 years ago, I have no memories of having visited Robinhood Marine before, so I was curious to see what it is like from a water-borne cruiser’s perspective. I do remember it always had a reputation for being an expensive yard, relative to other options in the area. And, of course, I am very aware of the two cruising sailboats they started building here some years ago–the Robinhood 36 and 40. These are actually the old Cape Dory 36 and 40 in disguise, built in the same molds, but to a much higher finish quality. 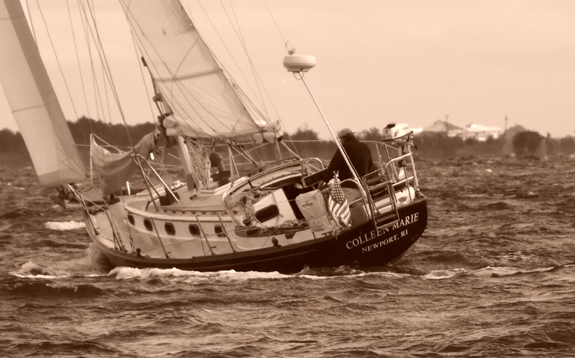 A Robinhood 36 under sail. These are expensive boats, especially when compared to the many old Cape Dorys on the market, and I don’t think too many have been built

We had a fine time here. The scenery is spectacular, and the facilities are first rate. There is a nice bar and restaurant, showers, a laundry, a wood-paneled library (with a good book exchange and a strong WiFi signal), plus some interesting historical exhibits. Of these I was most intrigued by the statue of the Abenaki chief Mahotiwormet, known to British colonists as Robin Hood, after whom (obviously) this tiny community, its boatyard, and its cruising boats are named. 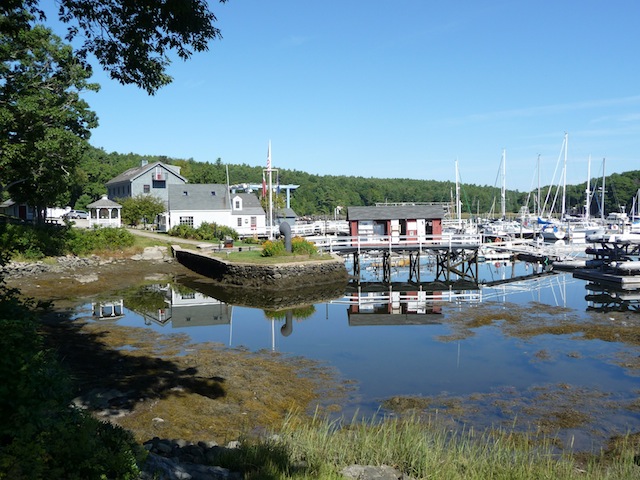 The docks at Robinhood Marine 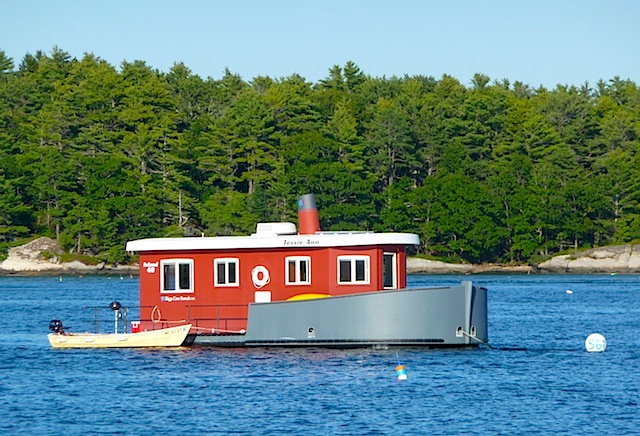 One of several Island 40 houseboats we saw moored there. These are available to rent as floating summer cottages through Riggs Cove Rentals 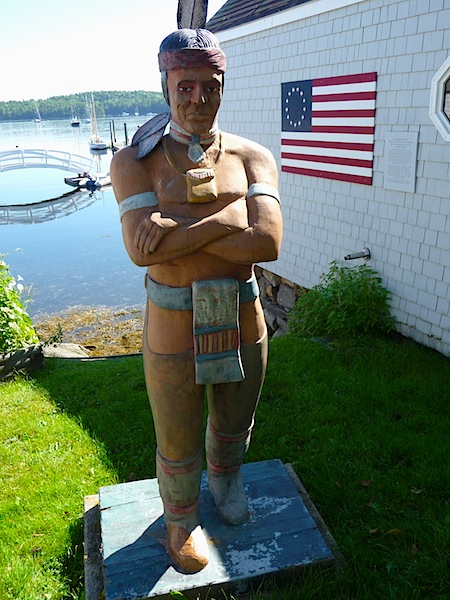 Chief Mahotiwormet, aka Rawandagon, aka Robin Hood. He is believed to have been buried at Woolwich, near Bath

When I was a boy I was told this fellow earned his nickname in a series of sharp 17th-century real-estate deals in which he cannily sold the same pieces of property to several different settlers. An example, if you will, of a Native American beating the white man at his own game. Googling him now, however, I find no reference to this legend. The sole seemingly authoritative source, an essay by Harald E.L. Prins in a book, Northeastern Indian Lives, 1632-1816, instead describes him as a tragic figure who presided over the inexorable demise of his people, wrought mostly by European diseases and alcohol, with as much dignity as he could muster, and who also tried his best to thwart the conflict, King Philip’s War, that ultimately destroyed them. I can’t guess now which interpretation of the man’s career is more accurate, but certainly they are not mutually exclusive.

I was also intrigued by an unusual vessel I spied in the mooring field. A rather extreme example of a sharpie, I guessed, but with a weird superstructure. We did a drive-by in the dinghy and snapped some pix. Then, on going ashore the next morning, we learned the boxy-looking houses on its deck are in fact for displaying produce and baked goods, as this turned out to be a grocery boat, Beth Alison, out of Bowdoinham, that has been plying these waters selling provisions in different harbors for the last 20 years. 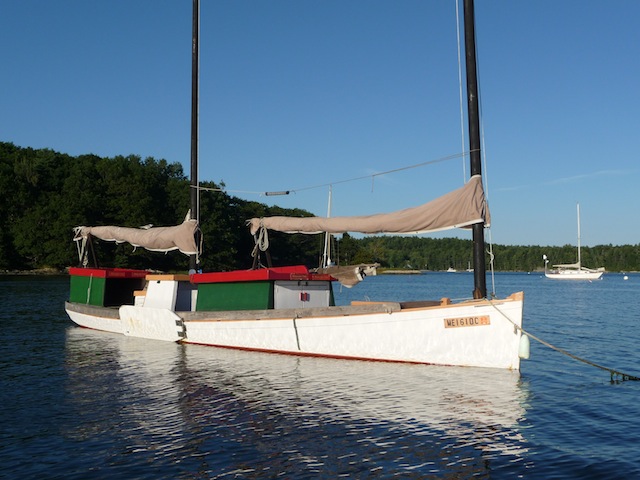 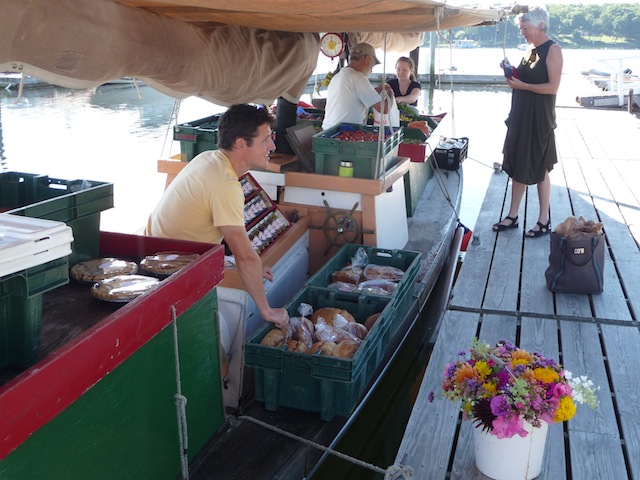 Having girded our larder, and again having the tide in our favor, we set out soon afterwards for Damariscove Island, just southeast of the river entrance. The wind, which was still light, was not in our favor, blowing straight up the river, but there’s nothing like a nice lee-bow tide to make beating out a wide river mouth seem like a gentleman’s game. 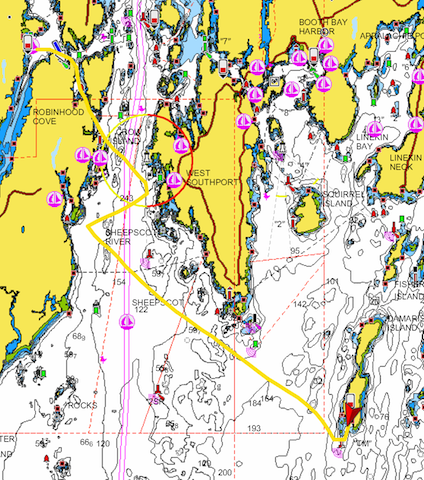 Our route to Damariscove. Thanks to the tide we only had to tack twice to lay it

Some of you now may be shaking your heads, remembering what happened last time I stopped at Damariscove, just two months ago. But this time the weather forecast made it painfully clear conditions would very settled for at least another 36 hours, so I was confident we would be comfortable. 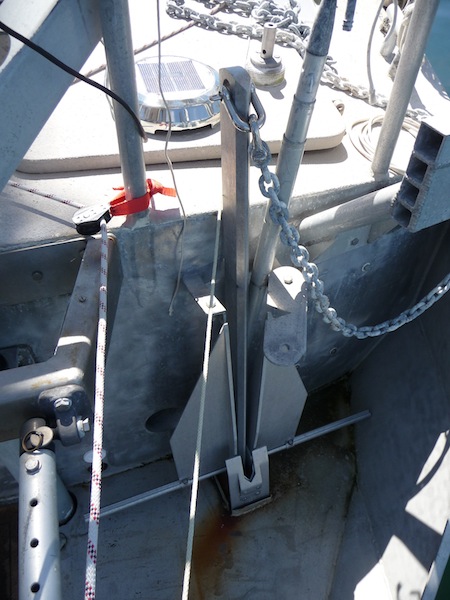 Lunacy‘s stern anchor prepped for deployment. There really isn’t much room for swinging when anchored here 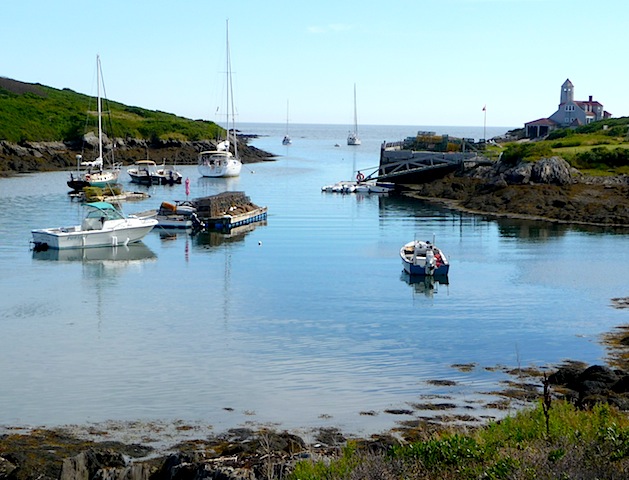 The cove at Damariscove, as seen from its northern end. Thanks to the wide-angle camera lens it seems much bigger here than it really is. You can see Lunacy anchored out to the left of the old Coast Guard station. I was interested to see that a Beneteau 42 succeeded in getting into the inner harbor and picked up a mooring there. Its skipper told me he had 12 feet of water (he entered at low tide) all the way in 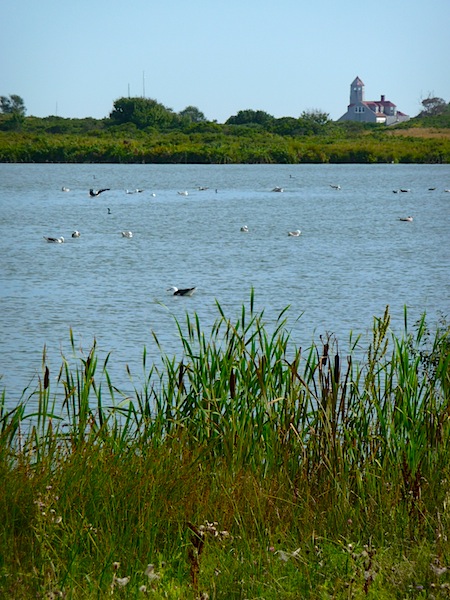 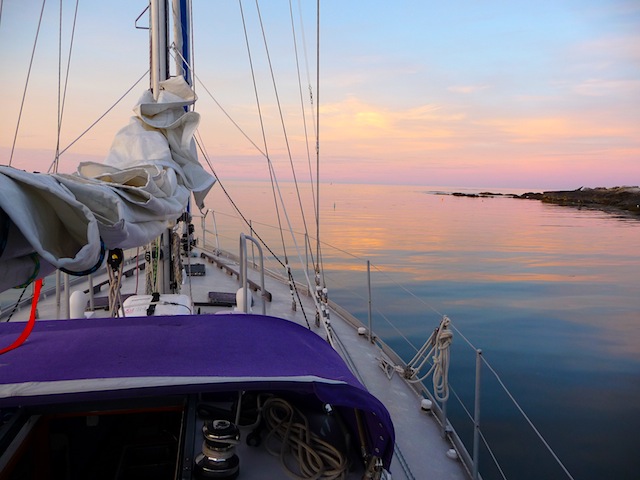 View from Lunacy‘s cockpit the next morning at sunrise. There was nary a ripple nor swell in sight

We had no worries about leaving the boat unattended so seized the opportunity to hike as much of the island as possible. I’ve been coming here since I was a teenager and have explored the south end of the island, but I’d never been up into the north end, which is now closed off during much of the spring and summer to accommodate nesting birds. It was now late enough in the season that the birds were done nesting, so I hoped this was my chance.

Alas, after much technical clambering over rocks across the island’s narrow central isthmus, which reeked of bird excrement, we realized there was no proper inland trail leading through the island’s northern lobe. To get all the way up to the end of the island we needed machetes, or had to climb rocks along the shore the entire way there and back. So we gave it up and retreated to the still-born ease of the cove.

Next morning, after breakfast aboard (starring some tasty blueberry pound cake) and another hike ashore, it was time to start heading west again, back toward Portland. But now, unfortunately, conditions were so settled there was exactly zero wind and we were forced at last to run the engine for many hours on end. 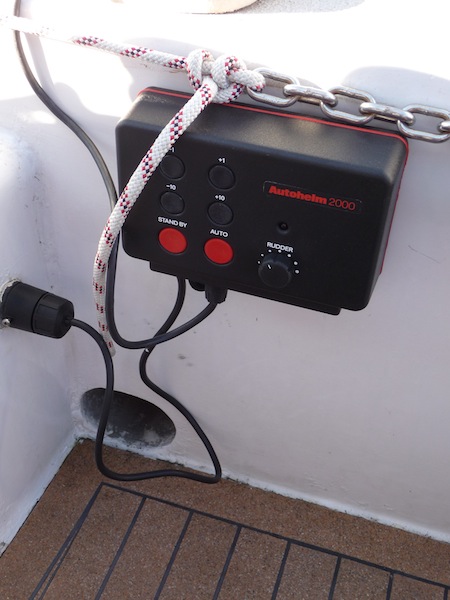 POSTSCRIPT: This cruise marked the debut onboard of my “new” 25-year-old autopilot. I wired it up while we laying at Sebasco and used it to steer the boat from that point forward. On reading the manual (which did not come with the unit, but was unearthed online), I was amazed to learn it is in fact quite sophisticated, with super-powers like auto-tacking I never guessed it had. It performed passably well during our cruise, but still seems to be learning the boat and does steer a bit sloppily at times. On testing it before running actual sea trials, I also re-tested the old identical unit, and it seemed to be working again. So maybe now I have two functional units and can carry one in reserve.