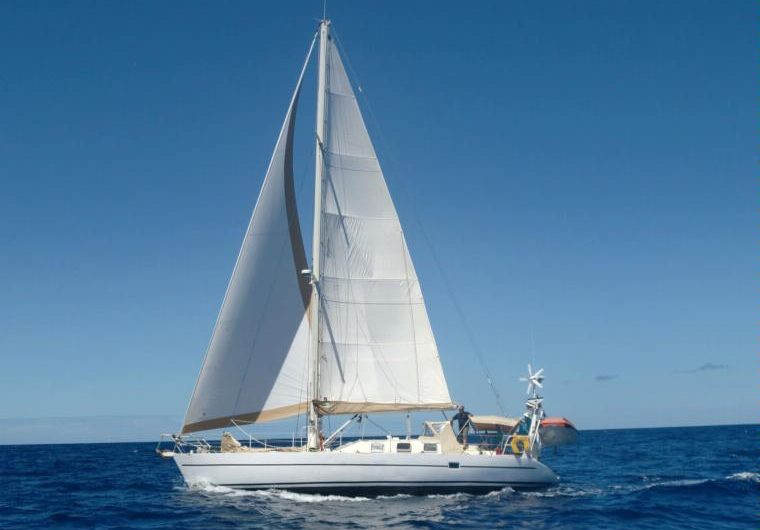 Aluminum centerboard cruisers like this are not often seen in North America, but they are common in Europe, particularly in France. Garcia Aluminum, a highly respected French builder, now reorganized as Garcia Yachting, often works on a custom basis but also builds to several standard designs. This Passoa 47, drawn by Phillipe Harle, is very representative of its species. Unlike the keel/centerboard boats most Americans are familiar with, these French boats have integral centerboards descending directly from their bilges. They draw very little water when their boards are up and make great coastal gunkholing boats. They stay upright when aground and can be driven straight on to a beach if desired. They also carry a great deal of fixed internal ballast in their bilges and are self-righting, thus are also suitable for ocean sailing.

Garcia is renowned for its workmanship and builds only in marine-grade 5086 H3 aluminum alloy. The Passoa 47 has a robust construction with 10mm plate down low that decreases in thickness as it climbs the hull. The chainplates are supported underneath by curved I-beams girding the breadth of the hull’s mid-section and are strong enough to lift the boat with. The fuel and water tanks, including the tank baffles, are integral parts of the boat’s bilges and form, in effect, a series of collision compartments that provide extra security when scraping over reefs and rocks. The ballast, consisting of 11,000 pounds of iron pigs (preferred over lead for galvanic security), is sheathed in glass and fixed in place in sealed bilge tanks filled with an insulating bed of tar. 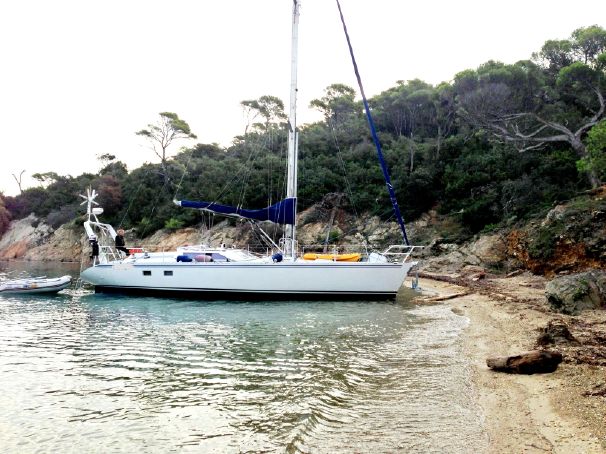 What it’s about. Yes, you can beach the boat if you want

The boat is reasonably light for its size, but is driven by a conservative rig. A standard Passoa 47 has a relatively short deck-stepped mast (just under 60 feet from the waterline) supporting a cutter rig that yields an SA/D ratio that seems timid for a modern design. This helps the boat’s stability, as does its relatively wide hull form, but its theoretical AVS, about 110 degrees, is still a bit low compared to most conventional boats. In the real world, however, a Passoa with its board up will skid away from breaking waves that send conventional boats tripping over their keels. Several Passoas have circumnavigated and have cruised in high latitudes and there is no record of any significant capsize problems.

In spite of its non-aggressive sail plan, the boat can be very fun to sail. In addition to the centerboard, there is a daggerboard between the skeg that supports and protects the propeller and the low-aspect spade rudder. By adjusting these two underwater foils you can precisely balance the boat against the pressure in its rig and, of course, can also vary the hull’s wetted surface area. 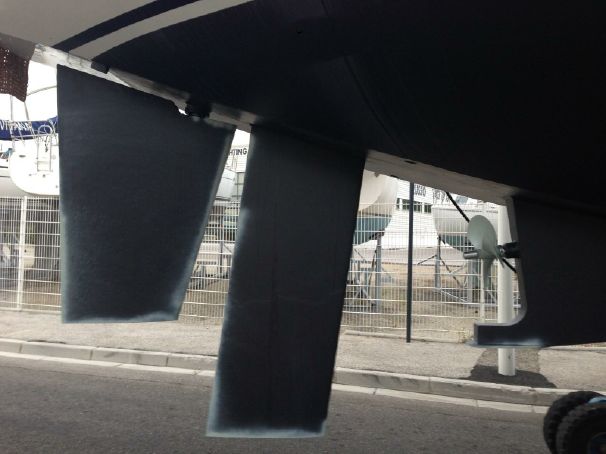 The rudder is very shallow, so the boat can be beached, but there’s also a retractable daggerboard aft between the rudder and prop to help increase directional stability

On an offshore passage I once made aboard a Passoa 47 from Massachusetts to Virginia, I was amazed at how much balance can be introduced into the helm by playing the boards a bit. In moderate wind with the sails and boards set right you can leave the wheel to itself with no brake on. I often found the cleanest, quickest way to steer was almost totally hands-off, with just a touch on a spoke from time to time to make small corrections.

The boat can also significantly outperform its numbers sailing off the wind in a good breeze. Pull up the centerboard, leave down the daggerboard, and what you’ve got is a big metal surfboard with a nice fin aft to keep everything lined up straight. With 20 knots apparent wind on a dead run under the main and a poled-out jib with the board up we maintained a steady 9 knots of boat speed during my passage and frequently hit 14 knots surfing in moderate seas. Best of all, because all the ballast is right up in the hull, the boat has a much smoother motion than its comfort ratio suggests.

Garcia built 60 of these boats between 1983 and 2000, but no two are exactly alike. Metal construction, unlike fiberglass construction, does not depend on molds, and this allows for a great deal of customization. Most of the boats have an integral solid-aluminum stern arch abaft the cockpit, some of which are sharply raked and have lifting arms for hoisting tenders aloft as though on stern davits. These stern arches, of course, are great for mounting radomes, solar panels, and various antennas. 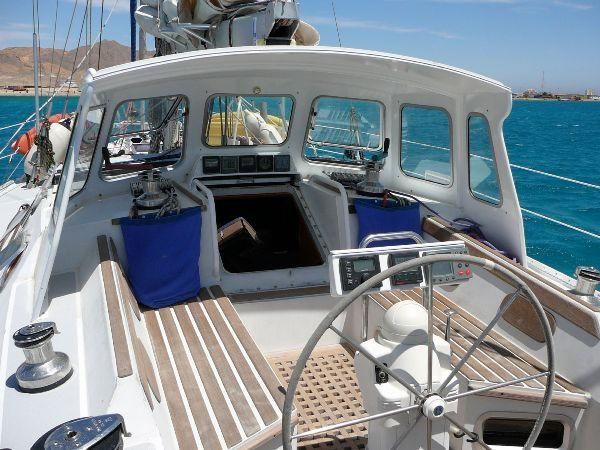 This is a more-or-less stock cockpit, but with a custom hard dodger added. The super-secure companionway hatch is standard. Climbing in and out is a bit harder, but you can dog it down tight in severe conditions

Some boats also have smaller integral arches forward of the cockpit, and these provide a great foundation for a dodger and can support a mainsheet traveler if desired. Having solid vertical supports to grab on to at either end of the cockpit makes it very easy to move around this normally busy space in a seaway; they also make it easy to rig an awning over the cockpit when anchored out under a tropical sun. At least one boat I inspected also had a unique super-large flush bridgedeck instead of a conventional cockpit, with just one small foot well all the way aft for the helmsman behind the wheel.

The interior accommodations likewise are extremely variable. Garcia in the past built boats to any stage of completion and there are a few Passoas with owner-finished interiors. Most, however, were finished for Garcia at their yard by the respected French firm Rameau. The standard layout has two small staterooms aft with a large master stateroom forward of the galley/saloon area and a large forepeak forward of a watertight collision bulkhead. The galley/saloon is situated within the short raised trunk cabin and on all Passoas I’ve seen this is the only area with full (over 6 feet) standing headroom, though Garcia may have extended the trunk cabin by request on some boats. 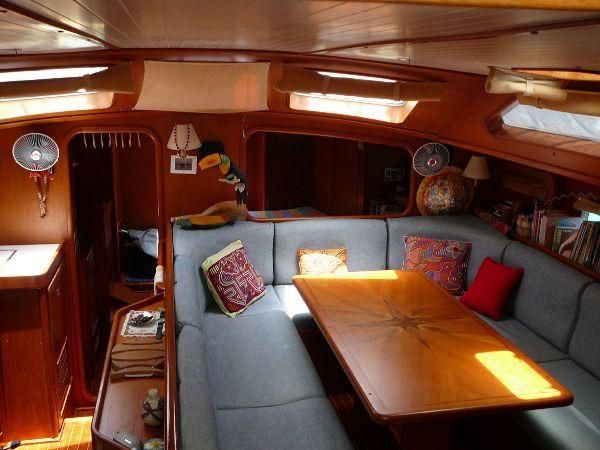 On most Passoas the saloon table is forward of the companionway, opposite the galley 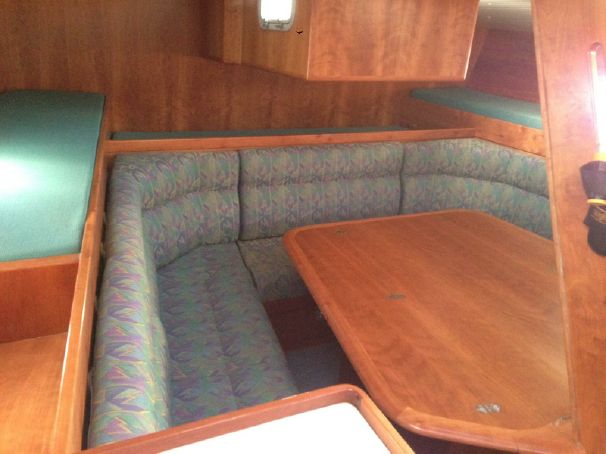 On a few the saloon table is abaft the companionway, under the cockpit. The engine is under the table and can be completely exposed

On two boats I’ve been aboard (one owner-finished, the other yard-finished) the saloon table is situated all the way aft right under the cockpit and is surrounded by an enormous wrap-around settee. I thought this worked extremely well, though it does cost two aft staterooms. It allows for a very large galley and nav desk under the trunk cabin and turns the entire after half of the boat into an enormous social space that can serve as party central in amiable anchorages. As a bonus, the settees also make great sea-berths while sailing. 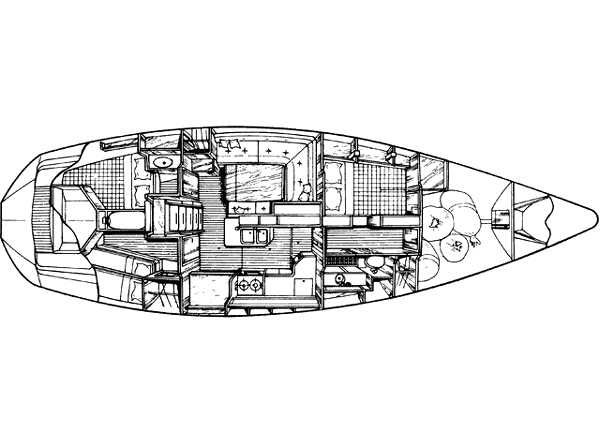