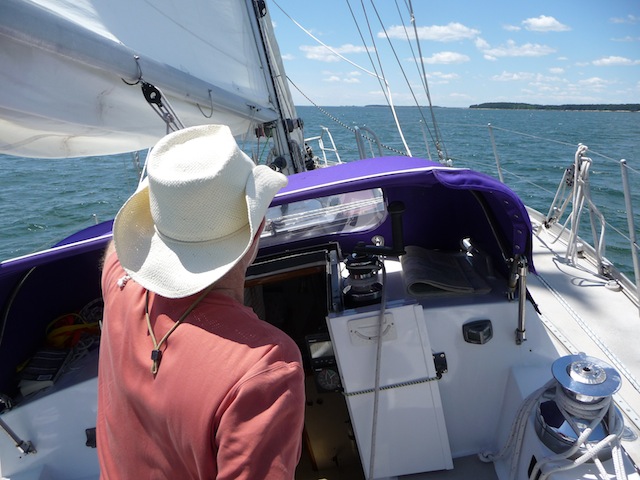 This wasn’t so much a cruise as a delivery to nowhere, as the goal was to get Lunacy from Portland to Rockland, get her measured for new sails by Doug Pope, and then get her back to Portland again as quickly as possible. The scheduled window for accomplishing this was Tuesday through Friday of last week. Coming along for the ride was my old partner-in-crime, Phil “Snakewake” Cavanaugh (see photo up top), who in his dotage has taken to wearing country-western garb while sailing.

We got off from Portland on Tuesday at about 1100 hours in a variable breeze that had us variously close-reaching at speed, drifting under the cruising spinnaker, and motoring under a floppy mainsail. We got as far as Damariscove Island, where we pulled into the tiny harbor to find two other mid-size cruising boats tied up to moorings, plus a third small one moored way up at the head of the cove. 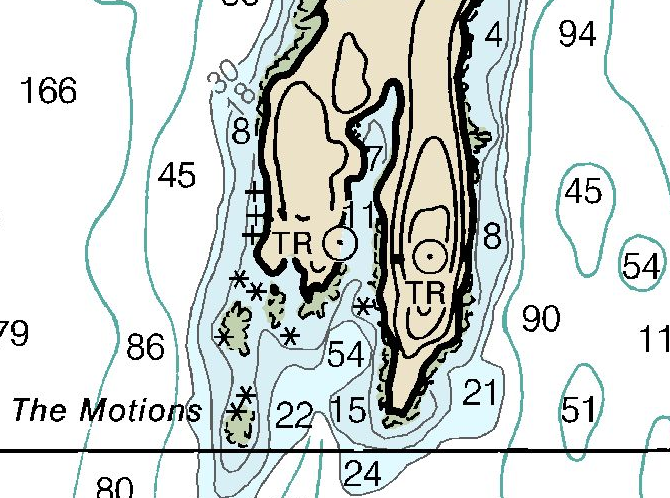 The miniature harbor at Damariscove. The tower on the left represents the Coast Guard station. Back in pre-colonial days, when this was a seasonal fishing station, up to 30 boats at a time supposedly moored in here 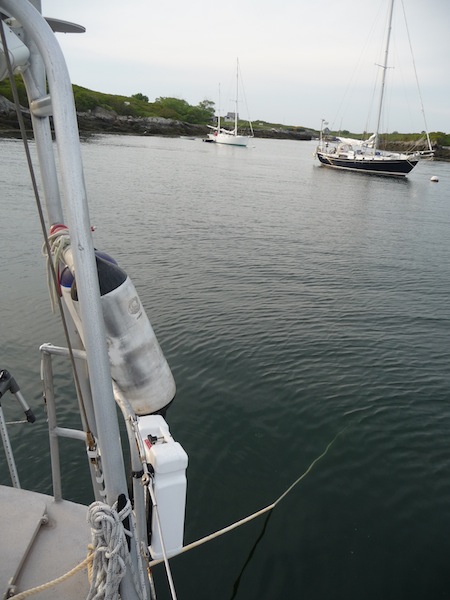 Stern anchor deployed from Lunacy‘s stern on nylon rode. That’s a Kaiser Gale Force 34 behind us on the right and a sweet L. Francis Herreshoff ketch on the left

We dropped anchor just south of the two larger moored boats, alongside the old Coast Guard station, and for a short while the faint south breeze kept us lined up properly in the cove. It soon shifted a bit southeast, however, setting us on the west-side rocks a bit, so we roused ourselves into activity and set a stern anchor–the first time I’ve ever done this on Lunacy. I was very gratified that I actually had all the necessary bits onboard, and that the deployment went smoothly.

We had a wretched night onboard. First came a big northbound ground swell and some treacherous fog, then came a brisk southerly breeze, and finally some thunder squalls. This was actually more-or-less consistent with the forecast, and all I could do was give myself a big dope-slap for not believing it. The boat was pitching madly, and neither of us slept much, and I was praying fervently that the anchor would hold.

Looking back at my last post on Damariscove, I see I had a similar experience last time I was there. I’ll let you draw your own conclusions about that. In my defense, all I can say is that I like this place so much, I’ll apparently go through hell to stay there.

We were, in any event, quite happy to leave in the morning. The wind was south shifting northwest through the day, and as I studied the chart, pondering the distance to Rockland as we sailed by Monhegan Island, it suddenly occurred to me it would be much easier to just go up the St. George River to Thomaston instead. Shorter distance, flatter water, just as close (almost) to Doug Pope’s shop, and I hadn’t actually been up the river since the late 1990s, when I first started sailing my old Golden Hind 31 Sophie. 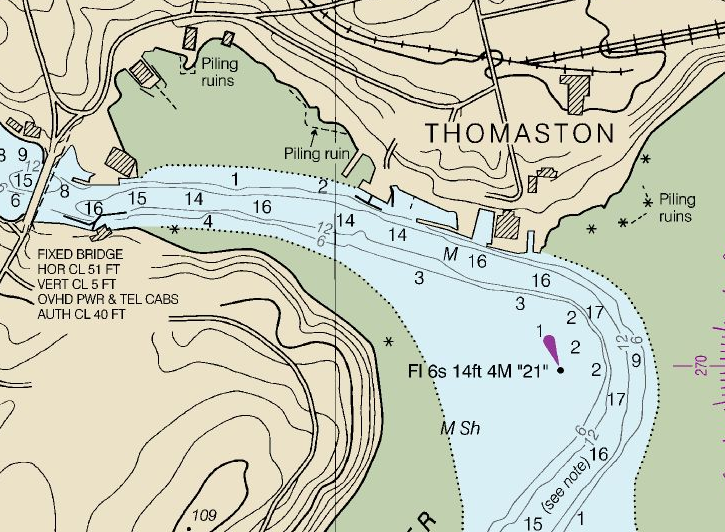 The Thomaston waterfront, about 10 miles up the St. George River. It doesn’t look it, but this was once a major center for shipbuilding

By the time we got up there the northwest wind, slanted almost straight west by the terrain, was blowing hard, and the tide was at maximum flood running in the opposite direction. There was zero chop, but picking up the town mooring buoy was still something of an adventure. 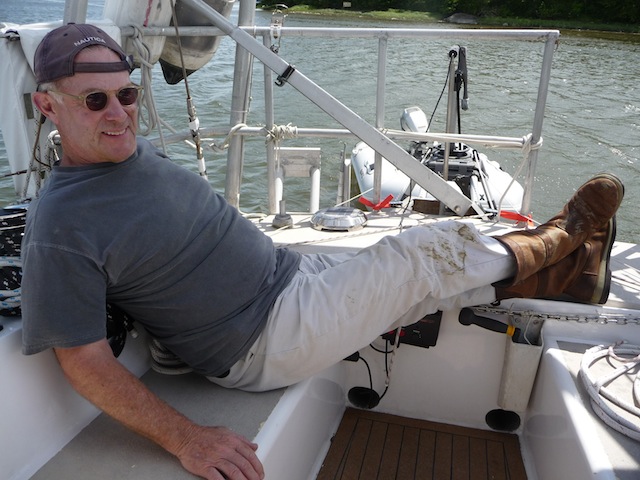 I actually lived in Thomaston a long while back, and it was very interesting walking around town again. Relatively little has changed. Down on the waterfront I was hailed by an old friend, Peter McCrea, who has been cruising and racing a Freedom 32 named Panacea since before time began. Later we hooked up with an even older friend, Loric Weymouth of Weymouth Yacht Rigging, who gave us a ride in his funky antique Land Rover and took us over to Rockland for dinner. 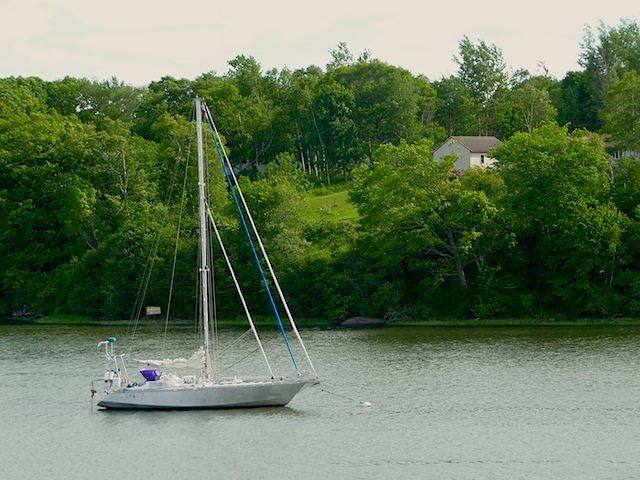 Lunacy lying in the river, with wind and tide aligned 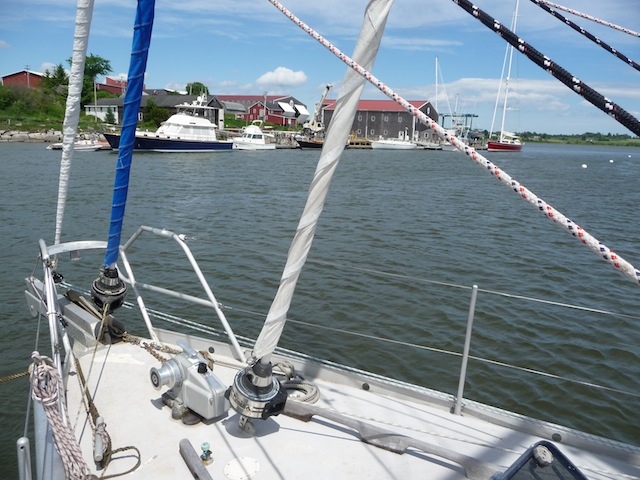 The yard at Lyman-Morse, as viewed through Lunacy‘s foretriangle. This is a great town for checking out other people’s boats 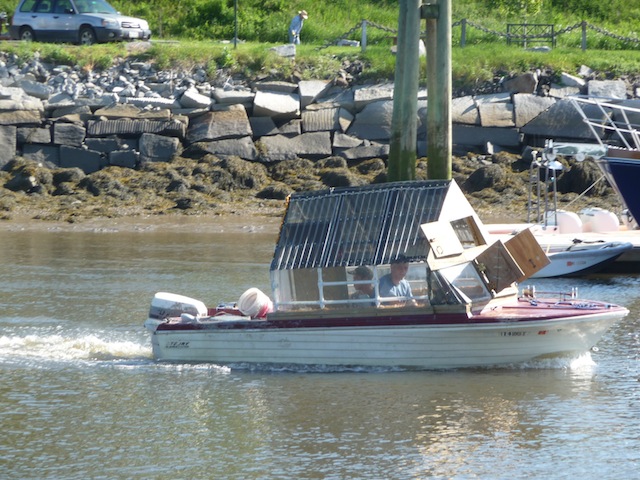 Clammers in a creatively modified runabout, heading downriver for a tide’s worth of digging in the morning

We enjoyed a blissfully quiet night. The next morning we had Doug Pope onboard for an hour, doing his tape-measure thing, and were off again by 1030 hours. The wind was still in the northwest, blowing briskly with gusts to 24 knots, and we had a scream of a sail heading downriver and then west again. Once out the river we were either closehauled or on a close reach all day and made major miles.

By 1800 hours, to our surprise, we were rounding Cape Small and were back in Casco Bay. After studying the chart for a bit, I decided we’d try spending the night in Small Point Harbor. 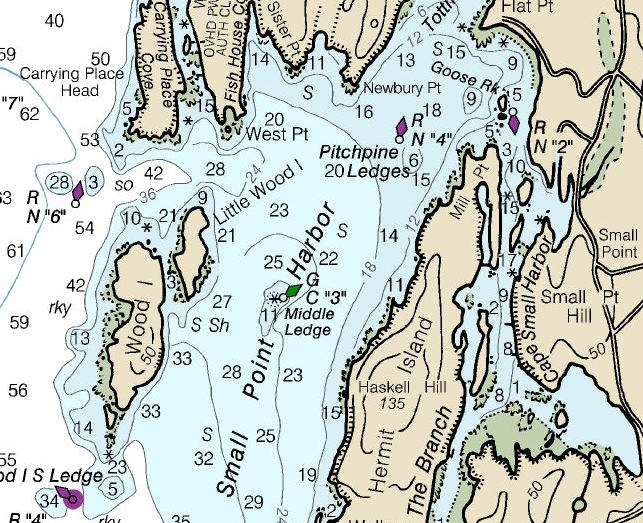 We anchored east of Newbury Point, a bit north of red nun 4

If you study the Taft and Rindlaub cruising guide, you’d think this was a very bad idea. They state the main harbor is too open to be tenable and suggest instead it’s best to squeeze through the very tight entrance into Cape Small Harbor, just east, for a good night’s sleep. But their text is worded in such a way that it seems likely they’d never actually tried spending a night here.

I figured after a day and a half of strong northwesterlies, any swell from the southwest would be greatly minimized and that it was worth a shot. Approaching from the south, we were able to sail right in, and the fact that there was not one single mooring out, or a single boat anchored here, suggested either a) T&R are right and this is a miserable place to be; or b) everyone believes what they read in T&R.

Our prospects seemed good, for as soon as we anchored two couples in a center-console skiff came by and plied us with free cocktails. We slept like babies again that night, and though there was a bit of motion in the anchorage, it was very subdued. 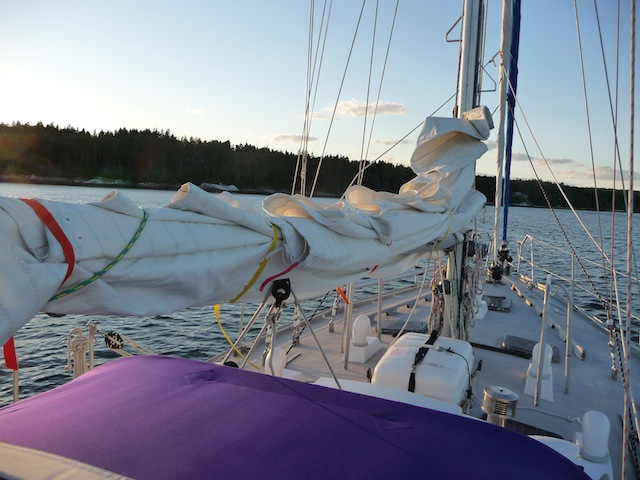 At anchor at Small Point Harbor. Were we the first ever to attempt this?

Next morning we toured Cape Small Harbor in the dinghy. It seemed a very magical, perfectly protected place, but the entrance is a worry. On the chart there you can see a 5-foot and 3-foot spot in the main channel, and my chartplotter offered no better detail when zoomed in. I saw no deep-draft sailboats inside and would probably want to survey the entrance with a portable depthsounder or a leadline in the dinghy before taking Lunacy in.

After our dinghy tour we were off again, screaming along in another firm northwesterly, and were back in Portland before noon–on schedule, mission accomplished.