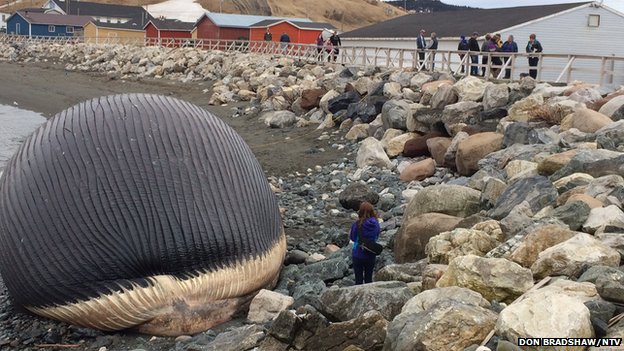 What do you do when a dead 81-foot blue whale washes up on your beach? Hold your nose and wait for it pop. So it goes in Trout River, Newfoundland, when the local population of 600 souls has been has been waiting on pins and needles for their whale to burst since it washed up in town last week. There’s even a dedicated website: hasthewhaleexplodedyet.com

The problem is these big dead sea mammals bloat with methane gas as they decompose, and the results can indeed be a bit violent. Check out this viddy of a marine biologist prodding a bloated dead sperm whale in the Faroe Islands last year:

You’ll see that everyone seems to know what’s coming.

Right now, as I’m writing this, it also seems the whale in Newfoundland is deflating on its own. Bummer. When I first found the site this morning things looked promising.

Evidently, one thing you should not do with a bloated whale is try to move it. Witness this ugly scene in Tainan City, Taiwan, when a sperm whale exploded on the street in 2004 while being moved to the town dump:

Icky poo. And, of course, you shouldn’t intentionally blow up your whale, like these idiots did in Oregon:

Be sure to catch the bit at the end where a perfectly good Cadillac is crushed by a piece of flying whale blubber.

Even if the poor folks in Trout River do not get to see their whale explode, they’ll still have the problem of disposing of its rotting corpse. Local and Canadian federal officials are currently fighting over who is responsible for this.