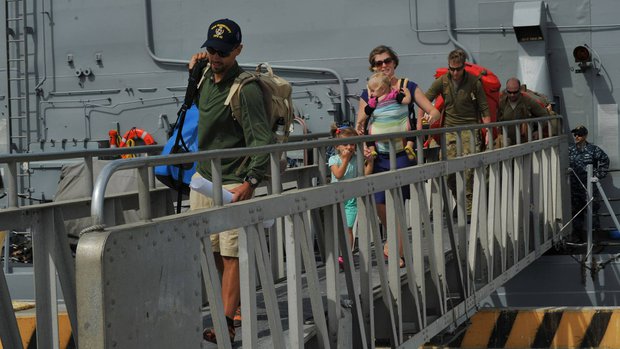 OK, I lied. I’m doing one more post before taking off today. I just watched this press conference with members of the California Air National Guard team who rescued the Kaufman family off Rebel Heart and wanted to make a few points about the rumpus this has inspired.

We still don’t have a lot of answers to questions worth asking, but it is clear from this video that Rebel Heart need not necessarily have been abandoned and scuttled. Apparently nothing was wrong with the steering, she was taking on minimal water, and the rig was at least serviceable. What it came down to, from the skipper/father’s point of view, as one member in the rescue team states pretty explicitly in the video, was whether he was going to stay with the boat or with his sick child and family.

I’ve now been in the bluewater cruising game for over 20 years, both sailing and covering it as a journalist, and I’ve never heard of anyone being put in this position.

I know of and have met many, many people who have gone on major bluewater cruises with very young children (including James Burwick and his young family aboard an Open 50, Anasazi Girl, who were recently rescued off the coast of Chile after being dismasted en route to Cape Horn, all without attracting major media attention). The vast majority of those cruisers, in my experience, have very positive experiences and the children are better off for it. This is the first time I have ever heard of a cruising family having to call in outside support to care for a sick child while on passage.

I also know of and have met several people who have abandoned boats at sea. As some of you know, I recently became one of them. In many cases, I know, too, the reasons for evacuating have been, shall we say, questionable. For example, I once interviewed, at some length, a skipper who evacuated a perfectly functional vessel only because he had received a bad weather forecast.

But I have never heard of anyone having to make the choice that Eric Kaufman had to make. As a father and sailor I know this much: it’s pretty much a worst-case scenario. Which ever way he went he was guaranteed to be criticized, and I am sure he had many more variables to consider than we will ever know about. One of the big ones, of course, was that this bluewater cruise was a dream he had worked many years to fulfill.

Bottom line: I have nothing but respect for the man and the decision he made. I only pray I am never put in the same situation.

I should note, too, that Eric has made a public statement on his blog that is perfectly anodyne and offers no substantive facts about his family’s situation then and now. Both Eric and Charlotte have been very honest in the blogs they have maintained on their website–it is one of the best cruising sites out there, IMHO–and unfortunately now they have only been punished for it. I would not be surprised, and would not blame them, if they now decided to keep their story to themselves.

Also, I need to correct a statement I made in my last post on this subject. The sailing community not been as unanimous as I would have hoped in their support of the Kaufmans. The primary locus of sailorly vitriol against the Kaufmans, not surprisingly, has been the Sailing Anarchy website, not just in the forums there, but in editorial commentary on the front page. All I can say about that is that it is a sad thing that a website with such a negative, bitter spirit is so popular with sailors.

One mainstream media organization has taken the trouble to tabulate a price tag for the Kaufman’s rescue, $663,000. The impression I get from the press conference is that most of this money would have been spent on training anyway. I do still think it is fair to ask whether those calling for unnecessary rescues should have to help cover costs, but I do not think this was an unnecessary rescue. Whether Eric stayed with the boat or not, the child needed help. Many laypeople have questioned whether taking children on such a voyage is unreasonably dangerous, but the fact is Eric’s kids were safer on that boat than they would be strapped into car-seats in a minivan on the freeway.

Finally, I can’t believe that none of the reporters at the press conference thought to ask my question: why so many rescue swimmers? I can see sending two, but why four?