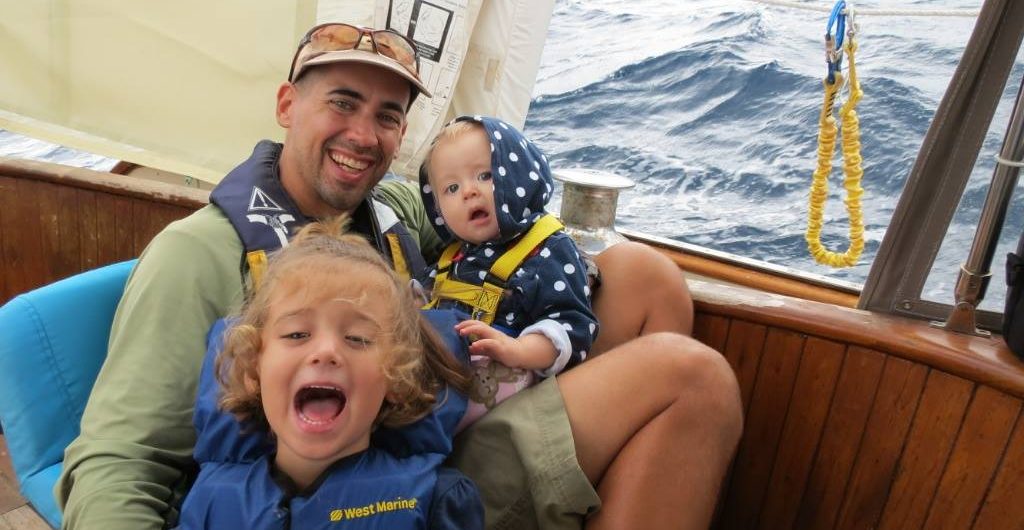 Goodness gracious. Do I feel sorry for Eric and Charlotte Kaufman! Not only have they lost their home, Rebel Heart, the Hans Christian 36 they’ve been cruising on for two years, which they had to abandon yesterday when they boarded a U.S. Navy warship about 900 miles west of Mexico, and which the Navy subsequently scuttled and sank. Not only have they had to cope with the unthinkable stress of having their 1-year-old daughter, Lyra, come down with some mysterious illness in the middle of a long Pacific passage. But now they have a good chunk of the global population lambasting them online for getting into all this trouble in the first place.

No doubt you’ve heard about this on some level already. I started following the story Friday online and heard it on National Public Radio yesterday, which doesn’t happen very often with bluewater cruising news.

But let’s review what we know:

1) Eric and Charlotte left Mexico on Rebel Heart about three weeks ago with their two young daughters, Cora (3) and Lyra (1), onboard. Eric is an experienced sailor and lured Charlotte into the cruising game. They bought Rebel Heart and started planning a circumnavigation 9 years ago; left San Diego and started actively cruising Mexico 2 years ago. Lyra was born after the cruise started (you can read an exciting account of her birth here). This big passage west to French Polynesia was the family’s first major ocean crossing. 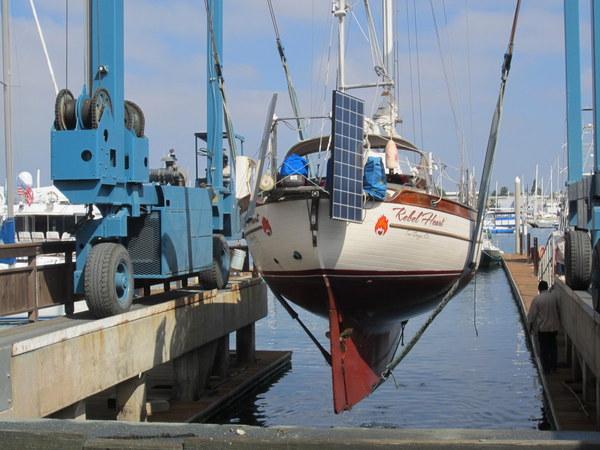 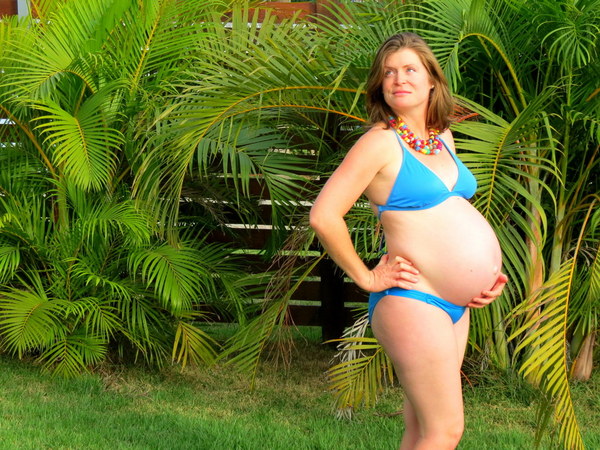 Charlotte with Lyra on the inside 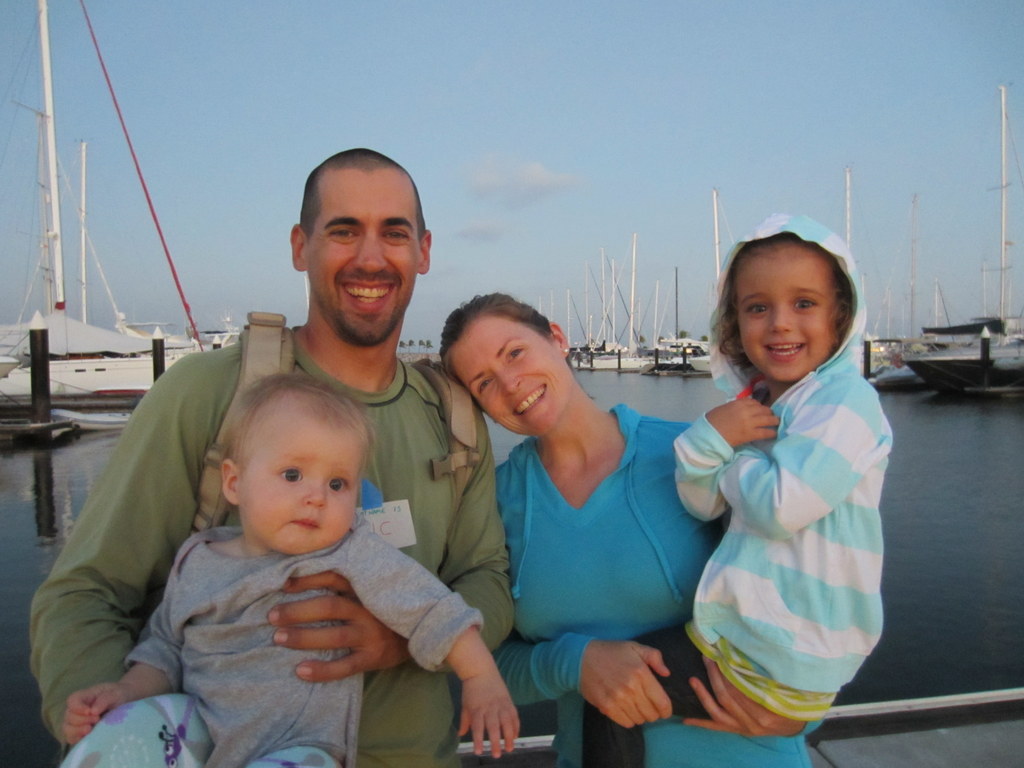 The whole family, with Lyra on the outside

2) Judging from the accounts of the passage posted separately on Charlotte’s blog and on Eric’s blog, they were having a challenging trip. Variable winds, too light for a while (they weren’t carrying enough fuel to motor), and also strong enough to move the boat fast, but with lots of motion. Seasickness and some minor repairs needed.

In other words, basically normal ocean-sailing conditions, but with having to mind the kids on top of it. On Charlotte’s blog, in particular, you can get a good sense of how hard this was. She does a lot of arguing back and forth with herself about whether it’s worth it or not and seems to come out on the “yes, it’s worth it” side, but only barely.

3) About a week ago something major went wrong with the boat, though we really have no idea what. Various reports mention the boat taking on water, steering problems, and a loss of communications (presumably also power), but nothing confirmed by the Kaufmans themselves. The last blog post, from Charlotte, was on April 1 and was very terse: “If you can’t say anything nice, don’t say anything at all.”

At about this same time, though we don’t know which happened first, Lyra came down with a big rash and fever that did not respond to medication. She reportedly had suffered from salmonella prior to the family’s leaving Mexico, but had been cleared by a doctor to depart.

4) The Kaufmans somehow contacted the U.S. Coast Guard via satellite on Thursday (several reports refer to a satellite “ping,” but I suspect it had to be more than that) and asked for help, and that same night four California Air National Guard rescue swimmers parachuted on to the scene, boarded the boat, and stabilized the child.

5) All eight persons onboard abandoned the boat yesterday and boarded a Navy frigate, USS Vandegrift, and Rebel Heart was scuttled. 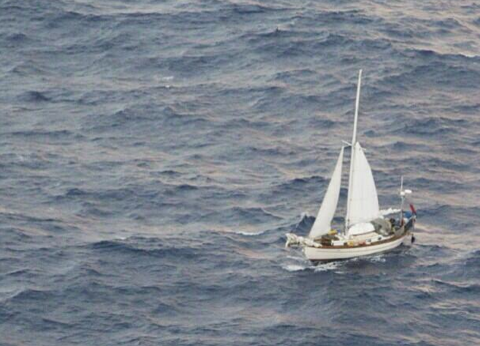 Rebel Heart from the air 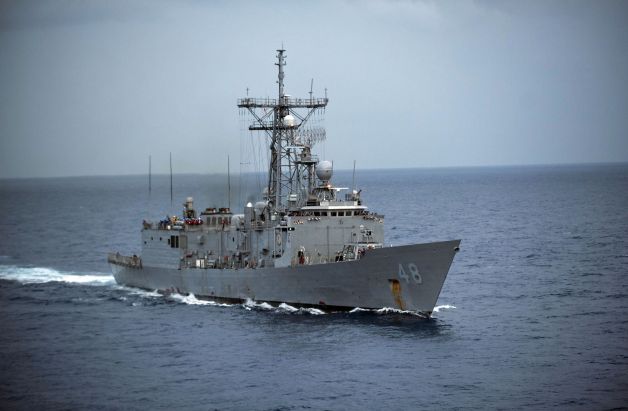 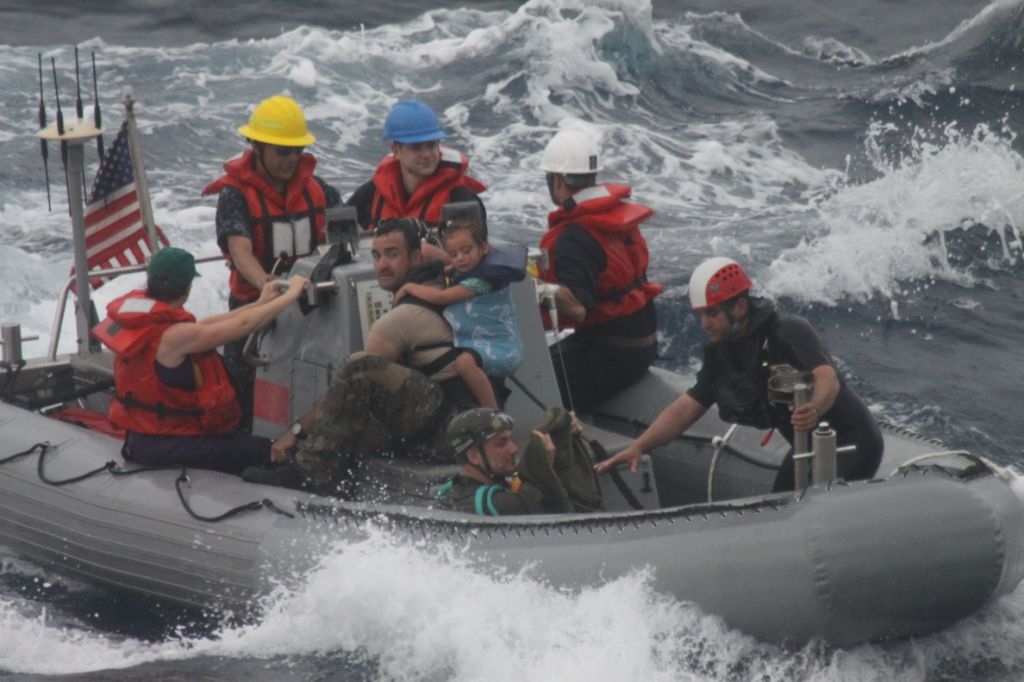 On the basis of this relatively slim narrative, many non-sailing laypeople, including Charlotte’s brother, have seen fit to criticize them for recklessly endangering their children. You can peruse the comments on their Facebook page for an idea of how this has been going, or check the comments section to any relevant news story.

The sailing community, I am pleased to say, has countered all this criticism with nearly unanimous support.

Ironically, I must note, when I had my little rescue adventure in January with Hank Schmitt and the owners of Be Good Too, this worked exactly the opposite way: laypeople supported us and the sailing community mostly criticized us.

Moral of that story: if you have to abandon a boat and want other sailors to sympathize with you, take some children along.

I actually had been following the Kaufmans via their website for a while, as Pat Schulte, former SAILfeed blogger of Bumfuzzle fame, had tipped me off to them. He and his family encountered them while they were knocking around Mexico on their boat. (Now they are boatless, cruising on the hard in their antique motorhome.)

So I kind of feel I know these guys, and my heart goes out to them. Having to cope with a major illness or injury has always been one of my biggest fears when sailing offshore. Having it be a sick child only makes it a hundred times scarier. As for the boat, I won’t be too surprised if it turns out it was uninsured, which would be a huge bummer. But I’m very glad Lyra and the rest of the family are OK.

Plus, of course, I’m dying to know what actually went wrong with the boat. Also: why so many rescue swimmers? Hopefully we’ll get answers later this week when the Vandegrift makes port in San Diego.