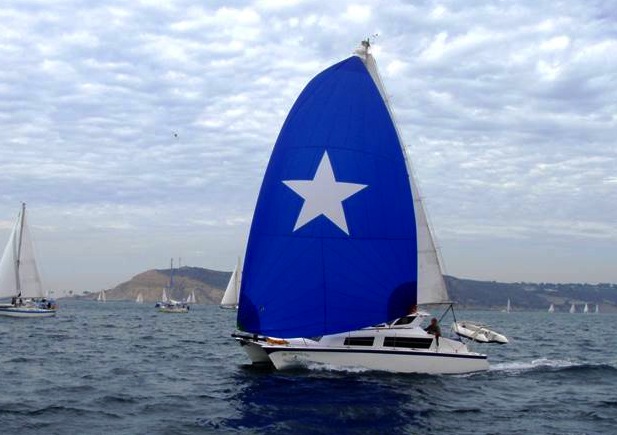 The Gemini, the first production cruising catamaran ever built in the United States, was born from the ashes of a terrible fire that in 1981 destroyed the molds for the successful Telstar 26 folding trimaran that multihull enthusiast Tony Smith had just brought over from Great Britain. Eager to save his new Maryland-based business, Performance Cruising, Smith immediately started building catamarans instead, using molds for an old British cruiser, the Aristocat, designed by Ken Shaw back in 1970.

The original Gemini 31, appropriately named the Phoenix, was rebranded with minor changes as the Gemini 3000 after the first 28 hulls were launched. In all, 153 of these boats (including the first 28) were built from 1981 to 1990, when the 3000 was discontinued and replaced by the Gemini 3200. All subsequent Gemini models built by Performance Cruising, including the 3200, the 3400, and two 105 models, though they grew slightly, have the same basic hull and deck form and interior layout as the first. A total of nearly 1,000 Geminis have been launched over the past quarter century, making them the most popular American-built cruising cats to date.

Though the Gemini design concept is archaic by today’s standards, it still works well for contemporary cruisers who want a great deal of living space in a small inexpensive sailboat. As catamarans go, all Geminis are quite narrow, just 14 feet across, which means they can fit into most standard marina berths. In spite of the narrow beam, there is still enough room inside for a queen-size double berth forward in the master stateroom between the hulls, plus two small doubles in separate guest staterooms at the back of each hull, as well as a small but serviceable raised saloon with two settees and a table that can collapse to form yet another double berth. 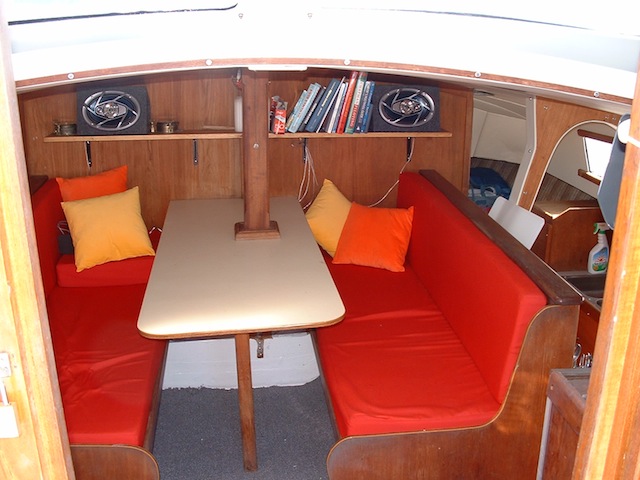 A modest but useful main saloon 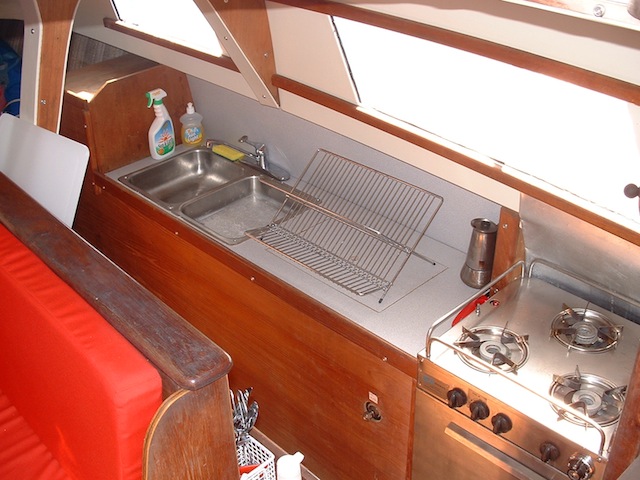 The galley is down in the starboard hull 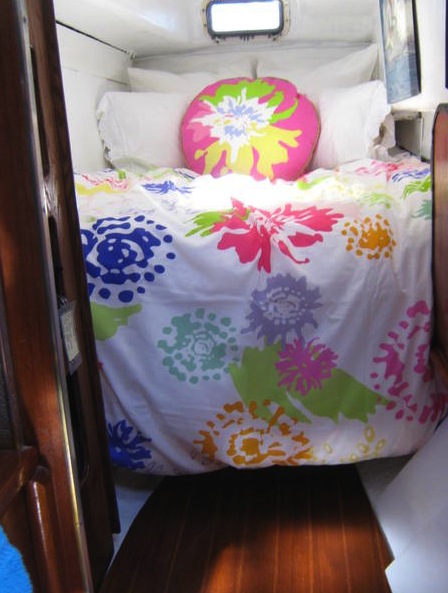 One of two aft double berths

What this adds up to, in the case of the Gemini 3000, is a 30-foot boat with standing headroom that can honestly sleep four couples in a pinch, or three couples quite comfortably in private cabins, or a couple with several small children (or two older children who demand some space of their own). Throw in a good-sized galley, a roomy head with a shower, a nice long nav desk, plus a large comfortable cockpit, and you have a veritable poor man’s cruising palace.

When it comes to performance Geminis are a mixed bag. They have a solid bridgedeck stretching the entire length of the boat from the stern to the bow, plus the bridgedeck is fairly close to the water, and this inevitably hampers a catamaran’s performance to some degree. The boats will pound and hobbyhorse a bit sailing into a chop, especially when overloaded. On the other hand, Geminis do have relatively deep pivoting centerboards to provide directional stability and lift underwater, rather than the inefficient shoal keels found on most dedicated cruising cats. In flat water a Gemini with its lee centerboard down could be rather closewinded for a boat of its type. On the Gemini 3000s, unfortunately, the genoa track is outboard and the wide sheeting angle makes it hard to take advantage of this potential. On later models the track was moved inboard to the coachroof. 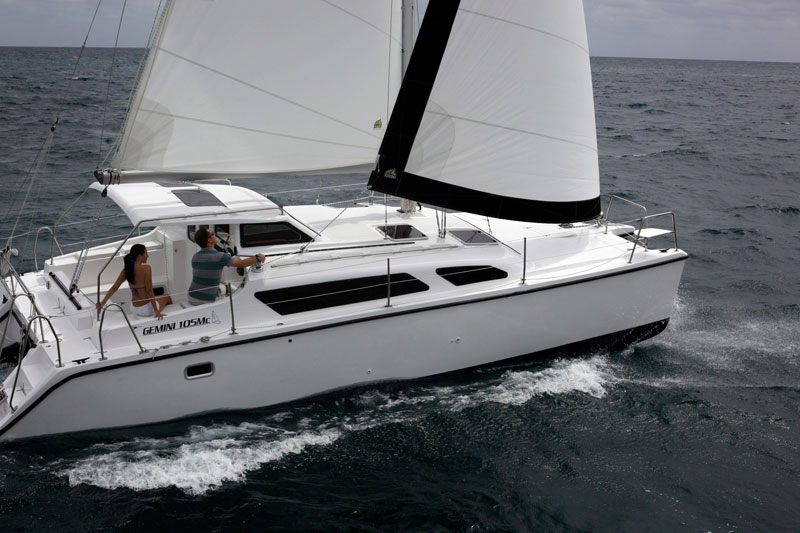 Example of a Gemini 105Mc, the last Gemini built by Performance Cruising

Because their centerboards can be raised and wetted surface area thus reduced when desired, all Geminis are reasonably fast off the wind compared to others of their ilk, particularly if you hoist a spinnaker. Unlike most modern cats, however, they have conventional rigs with backstays, and cannot fly a large main with a fat roach. Still, as long as they are not overloaded (an important proviso aboard any multihull), Geminis do surprisingly well in light air and can generally outsail most monohulls in their size range. They also have retractable rudders housed in stainless-steel cassettes, which allows them to take full advantage of their boards-up shoal draft when venturing into thin water.

Construction quality is mediocre at best, and though a few bold souls have taken Geminis offshore, the boats are best suited to coastal cruising. The entire hull (that is, both hulls plus the underside of the full-length bridgedeck) is formed in a single mold and is laid up as a solid fiberglass laminate of mat and woven roving. In the Gemini 3000 hulls polyester resin was used, and according to one consumer survey conducted back in the 1980s about 20 percent of owners reported some blistering. All subsequent models were built with an exterior layer of vinylester to prevent this.

The deck, also formed in a single mold, is cored with balsa in all horizontal areas and is through-bolted to the hull on a flange. To save weight neither the deck nor hull laminate are terribly thick and this, combined with the free-floating bulkheads inside the hull, makes for a somewhat flexible structure. Flexing in older Gemini 3000s often leads to some crazing and spider cracking in the exterior gelcoat. This problem is usually only cosmetic, but more severe stress cracking may indicate delamination in some areas and should be carefully checked. Older Gemini 3000s may also have problems with leaky Plexiglas windows. These were later changed to Lexan, which works better in windows of this size. Other problems to look for include corroding steering cables and undersized deck hardware. 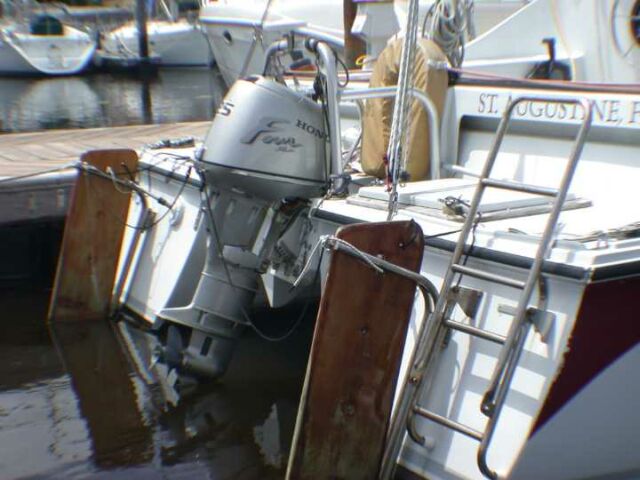 Outboard installation on an older Gemini

Though optional inboard diesel engines were available, almost all Gemini 3000s are powered instead by a single long-shaft outboard engine mounted in the middle of the transom. The outboard turns with the rudder cassettes, which greatly improves close-quarters handling under power, and can be raised when sailing to reduce drag. When the boat was in production outboard-powered 3000s were delivered with either 35 or 40 hp motors, but many boats currently are driven by 25 hp motors. Reportedly even a 10 hp motor can drive the hull along at 5 knots or better.

Because alternators on outboard engines cannot generate much electricity, most Gemini 3000s have propane-fueled water heaters and refrigerators. The refrigerators can also run on 110-volt AC power when plugged in at a dock. All other DC electrical loads for lights, pumps, electronics, etc., must be kept at a minimum, or generation capacity must be augmented with solar panels and/or a wind generator. In most cases owners prefer to cope with the undersized DC system by keeping other systems as simple as possible. 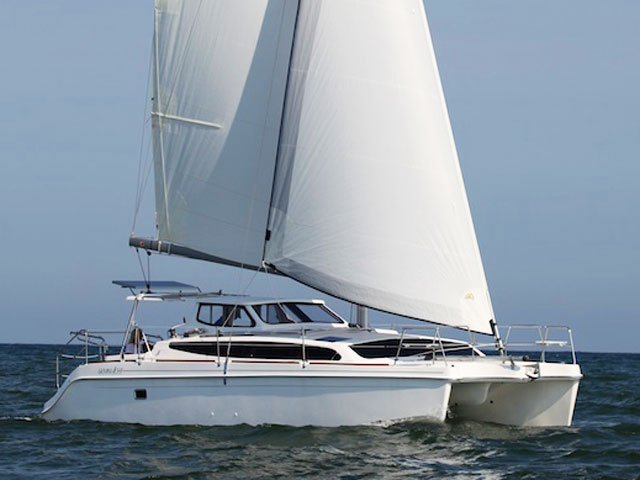 The latest iteration, the Gemini Legacy 35, under sail 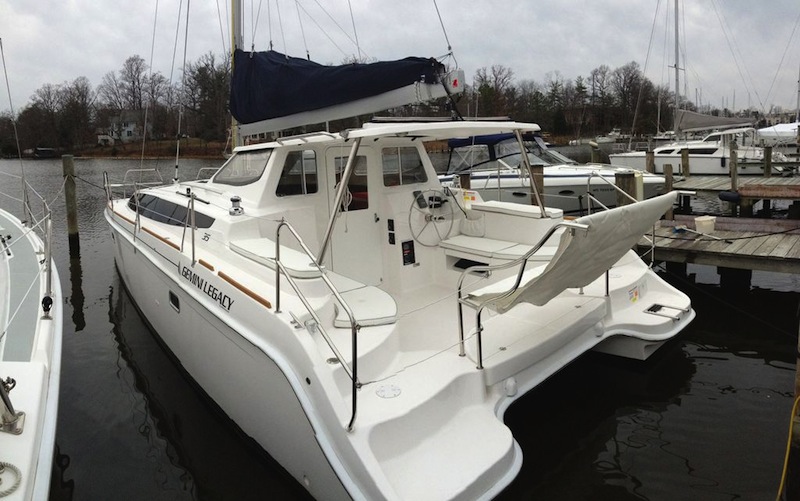 The cockpit on a Legacy 35. With no backstay and the main traveler on the targa roof, the cockpit is considerably more open

If you are attracted to Geminis but are keen on buying a new boat, you’ll be glad to hear that Marlow Hunter (formerly Hunter Marine) has taken over production and has significantly modernized the design. The Gemini Legacy 35, as it is called, is more of a mainstream cruising cat, with twin diesel engines, a diamond-stayed rig with a square-top mainsail, and fixed keels instead of centerboards. Build quality and the cockpit layout have also been improved. With a base price of $175K, the Legacy is considerably more expensive than a used Gemini, but is still significantly less expensive than most other new cruising cats.