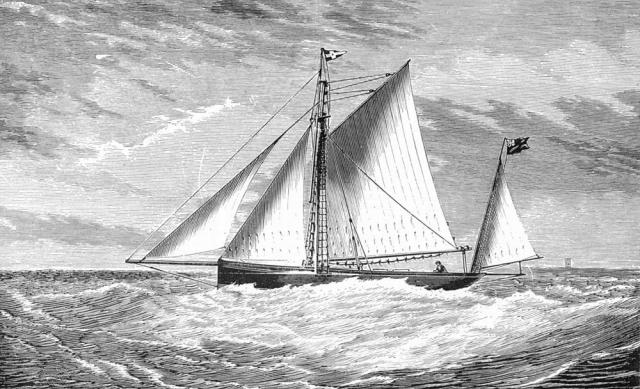 We have already discussed an early elite cruising vessel, Cleopatra’s Barge, and the development of high-end yacht design in the 19th century. Now it’s time to turn to the “hoi polloi,” the unwashed mass of middle-class (and upper middle-class) sailors who were also determined to enjoy “messing about in boats,” and who, ultimately, had a much bigger impact on the development of the sport.

One important pioneer was a stern British stockbroker named Richard Turrell (R.T.) McMullen, who, in 1850, at age 20, decided to teach himself sailing and commissioned the construction of a 20-foot half-decked cutter named Leo. Over the next 41 years he cruised throughout the British Isles and across the English Channel in a series of purpose-built vessels, the largest of which, a 42-footer named Orion (see image above), was a classic deep-draft, narrow-waisted British cutter.

McMullen’s career as a yachtsman, described in meticulous detail in his book Down Channel, was significant both because he was not a wealthy tycoon or aristocrat and because he was acutely interested in sailing for its own sake. He cared nothing for racing or yachting society, but was instead fascinated by the minutiae of boats and boat-handling and by the aquatic environment itself. He set strict standards and ultimately became competent enough to handle his vessels singlehanded.

McMullen’s first solo experience was aboard Procyon, an unusual 28-foot shoal-draft lugger with a cat-yawl rig and a short centerboard, or “drop-keel” as he termed it. He also once sailed the much heavier Orion singlehanded from France to England after dismissing a crew he deemed incompetent. His last vessel, the 27-foot Perseus, was, like Procyon, a yawl-rigged lugger conceived specifically for singlehanded cruising, except that she carried a headsail and had more draft and no centerboard. In 1891 McMullen was found dead, alone, aboard Perseus in the middle of the English Channel, apparently a victim of heart failure.

Another important figure was a Scottish attorney, John MacGregor, who in 1865 embarked upon a tour of Europe in a 14-foot canoe he called Rob Roy. The book he wrote about his adventure–A Thousand Miles in the Rob Roy Canoe on Twenty Lakes and Rivers of Europe–was published the following year, and its success quickly led MacGregor to make more canoe voyages in Scandinavia (1866) and the Middle East (1869). 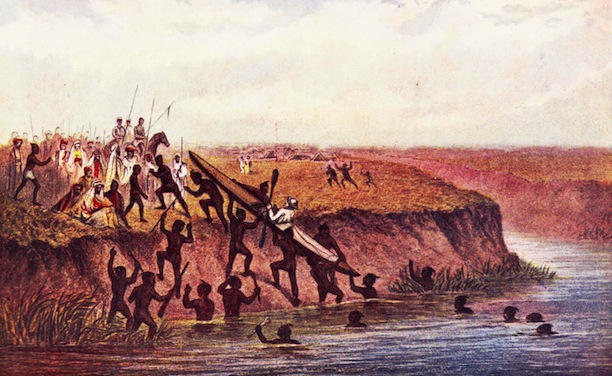 MacGregor’s canoe trips were not really cruises in the proper sense of the term, in that he hauled his boats by train or carriage from each river or lake he wished to explore and always found lodging for the night ashore. Nor were his canoes much akin to what we now think of as proper cruising boats. They were, in fact, mere kayaks, or “double-paddle canoes” as some then called them, a design concept MacGregor freely admitted to having cribbed from the North American “Esquimeaux.” But MacGregor’s adventures did serve to open the public’s eyes to the concept of recreation afloat and demonstrated in a very palpable way that the expense need not be prohibitive. MacGregor himself was, more than anything else, an indefatigable showman and expert propagandist with an unfailing instinct for garnering and exploiting publicity. His books and popular lectures were highly influential and led to the creation of “canoe clubs” throughout Britain and Europe. 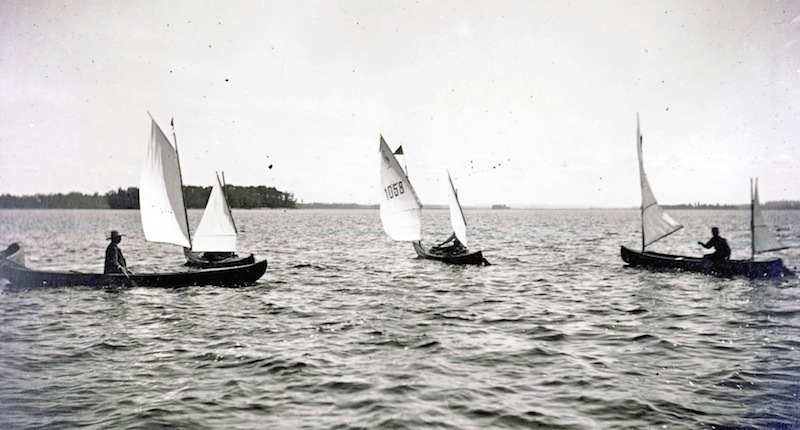 In addition to his canoe trips, MacGregor also engaged in one “proper” cruise in 1867 aboard a 21-foot yawl (also called Rob Roy) that he designed himself. This was much more a standard (albeit miniaturized) yacht with a ballast keel and a hull form roughly similar to that of larger British yachts of the era. It lacked a cabin (nights aboard were spent under a cockpit tent) but did feature such clever amenities as a tiny galley that folded into a cockpit locker. 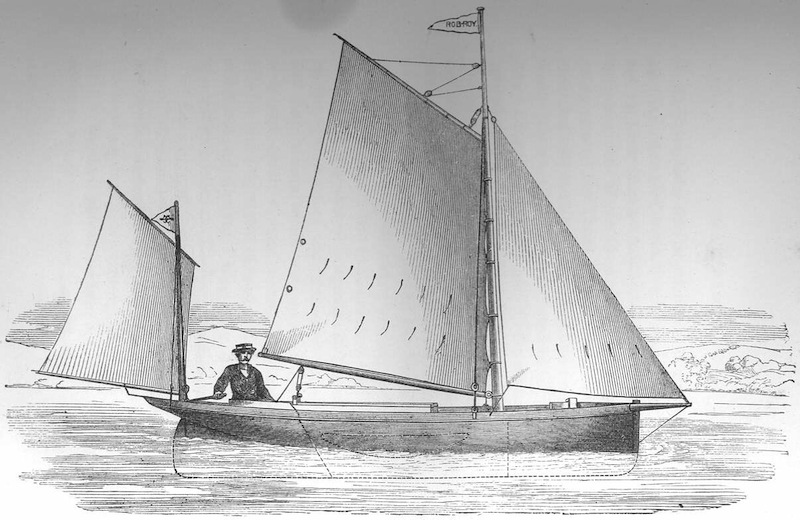 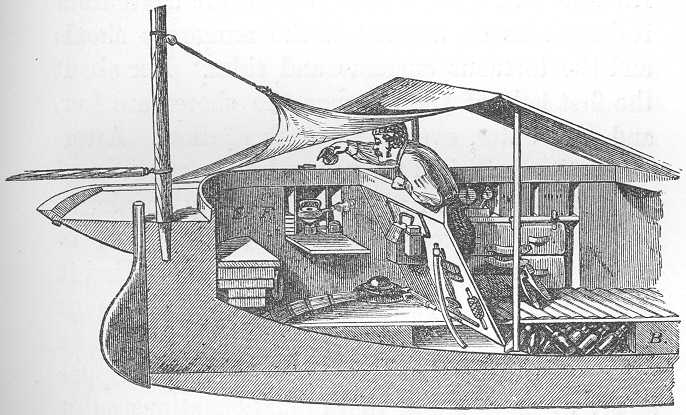 MacGregor’s little yawl was seaworthy enough to take him across the English Channel from England to France, up the Seine River to Paris, and back again. The ostensible purpose of this voyage was to spread the gospel about canoeing (and the Protestant faith) at a French boating exhibition sanctioned by the Emperor Napoleon III, who, like many others, had been inspired by MacGregor’s writing. MacGregor’s book about the cruise, The Voyage Alone in the Yawl Rob Roy, led many who yearned to set sail on vessels more substantial than canoes to mimic his example.

MacGregor’s American counterpart, Nathaniel H. Bishop, is no longer as well remembered but was also influential in his day. Inspired by MacGregor, Bishop first went cruising aboard a small paper canoe he called Maria Theresa. Subsequently, in 1875, he cruised down the Ohio and Mississippi rivers and along the Gulf Coast to Florida aboard Centennial Republic, a Barnegat Bay sneak-box he had built for just $25.

Lines and rig of a Barnegat Bay sneak-box

The sneak-box was a specialized centerboard spritsail skiff designed for use by duck hunters in the shoal waters of coastal New Jersey. Bishop’s boat was 12 feet long with a beam of 4 feet and weighed just 200 pounds. The book he wrote about his experience, Four Months in a Sneak-Box, was well received, and in 1880, again following MacGregor’s example, he helped form the American Canoe Association, of which he was the first commodore.

It is difficult to say how many would-be cruisers immediately followed in the wakes cut by men like McMullen, MacGregor, and Bishop. This sort of unobtrusive sailing–small voyages for pleasure undertaken by ordinary people in modest craft–was not of immediate or compelling public interest. The high-profile exploits of the rich and famous, by comparison, whether conducted on shore or aboard their yachts, were always grist for the popular press. Unless they were willing to tell their stories themselves, common cruisers had to be, and were, content to do their sailing in obscurity.

But something powerful was at work here–a seductive fantasy of autonomy and adventure that cruising under sail somehow promised to make real. MacGregor himself summed it up neatly in his account of his cruise to France. “Often as a boy,” he wrote, “I had thought of the pleasure of being one’s own master in one’s own boat; but the reality far exceeded the imagination of it, and it was not a transient pleasure.”

What we do know is that from the late 19th century onward, the number of middle- and upper-middle-class people engaged in cruising aboard their own small boats steadily increased, and gradually this aspect of the sport of yachting became just as significant as the nautical doings of the upper classes. By the early 20th century, there were enough London-based middle-class amateur yachtsmen cruising the coast of southern England that railway companies saw fit to offer them special fares. These open-ended round-trip tickets made it possible for sailors who were office-bound in London during the week to take a train south to one town on the English Channel on a Friday evening, spend the weekend aboard their boat sailing to some other town, and return to the city on Sunday night in time for work on Monday morning. In this manner, over a series of weekends, a persistent cruiser might hopscotch his way along a fair portion of the coast.

Small-boat cruisers, like their blue-blooded predecessors, also formed clubs. The first was the Cruising Club, which held its inaugural meeting in the office of a British lawyer, Arthur Underhill, in 1880 and soon afterward was officially ordained the “Royal” Cruising Club. There followed the Little Ship Club, another British club formed in 1926, and in the United States the Cruising Club of America, which first met in a Greenwich Village speakeasy called Beefsteak John’s in 1922.

These and several other cruising clubs that sprung up at the time focused on educating their membership in the vagaries of seamanship and navigation. In various ways–via newsletters, lectures, and lending libraries–members of these clubs sought not to assert their social status but to share information and expertise. This same impulse, leavened, of course, with pride of accomplishment, also led some to write and publish accounts of cruises they had made. This growing body of literature served both to disseminate knowledge among those practicing the sport and to attract new practitioners.

In our next installment in this series we’ll explore in detail the sorts of boats this new breed of cruisers set sail in.