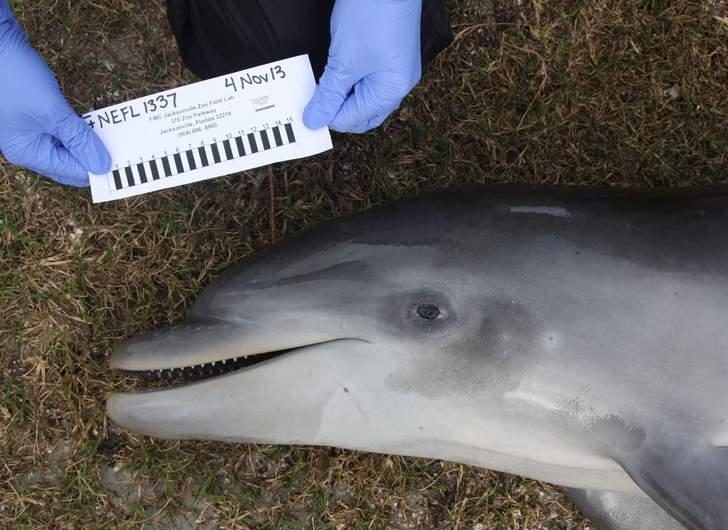 Dolphins on my mind. First, this great plague that has visited them. In the past year, over 1,000 dolphins on the U.S. East Coast have been documented as having died of a measles-like morbillivirus (see photo up top). The last time such an epidemic swept the coast, in the late 1980s, it is believed the virus wiped out about half the population of coastal migratory dolphins, and this time it only promises to be worse. Already documented deaths have exceeded the toll in the 1980s, and the epidemic shows no signs of abating.

We stopped at the Dolphin Research Center (DRC) on Grassy Key during our ongoing post-Xmas Florida vacation, and the folks there are clearly concerned. I had signed up our girls for a so-called “Dolphin Encounter,” and the very first question they asked during the pre-swim orientation was whether anybody had recently been handling dead dolphins on beaches.

No one had, of course. And not surprisingly only a few people in the group were aware of the morbillivirus outbreak.

The girls had a fantastic time in the water with a 3-year-old dolphin named Flagler, who was born at the DRC and has spent all his life in captivity. This is true of all the 22 dolphins at the facility, save two, who were originally wild but were taken in as rescues. The animals live in a series of large interconnected pens that are segregated from the Gulf of Mexico by nothing more than low wire fences. It looks as though it would be very easy for the dolphins to jump these if they wanted, and the party line is they don’t because the DRC is their home and they have no desire to leave. 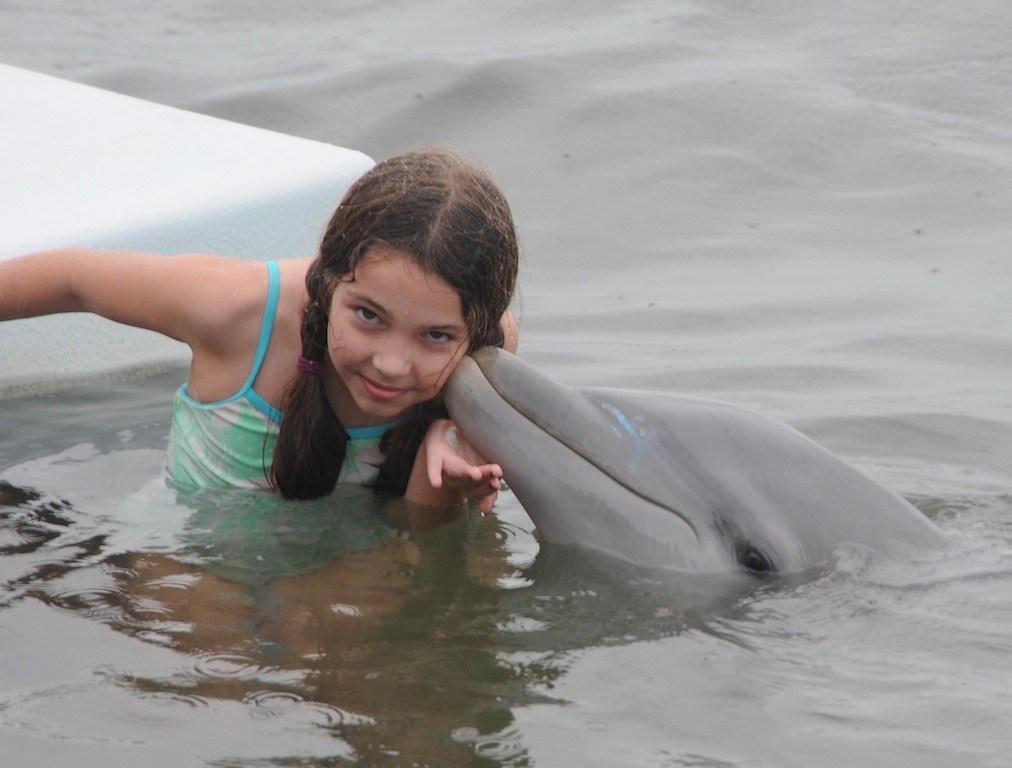 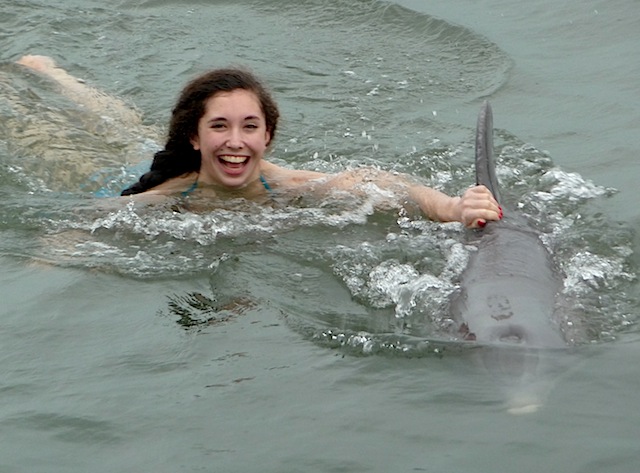 I didn’t get in the water myself, but as a parent I didn’t really have to. My vicarious gland was hard at work, and just watching the girls lead Flagler through his regular routines–a mock kiss and splash fight, a swim around the pen hanging on his dorsal fin, etc.–nearly brought a tear to my eye. Indeed, I was so invested in the girls doing this (it was my idea in the first place), I had what can only be described as a counter-intuitive response when a strange incident at the beginning of the encounter threatened to prematurely end it.

The girls were in a group of five, and right after they got in the water and were introduced to Flagler, the first woman in line told the attending trainer that the dolphin had bitten her leg. Not a hard bite, obviously, and the woman herself didn’t seem at all concerned, but the trainer immediately asked all of the group to get out of the water. There followed a consultation by handheld radio, and during this I wasn’t thinking–as I probably should have been–that my kids might be in danger. Instead I was worried the encounter might be aborted.

In the end, they went ahead anyway, with Flagler instead of a substitute, and everything was fine. 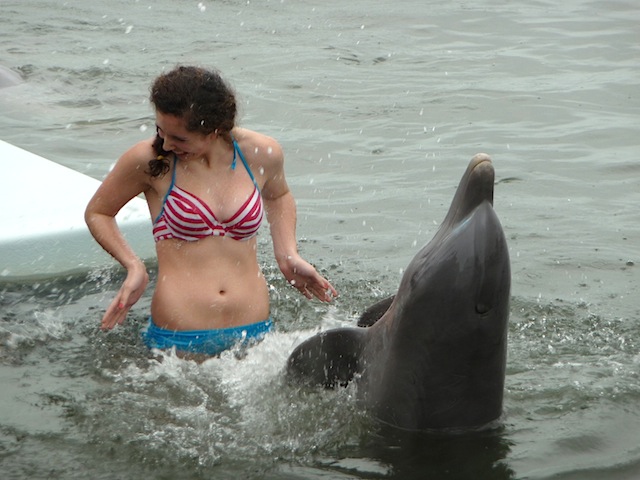 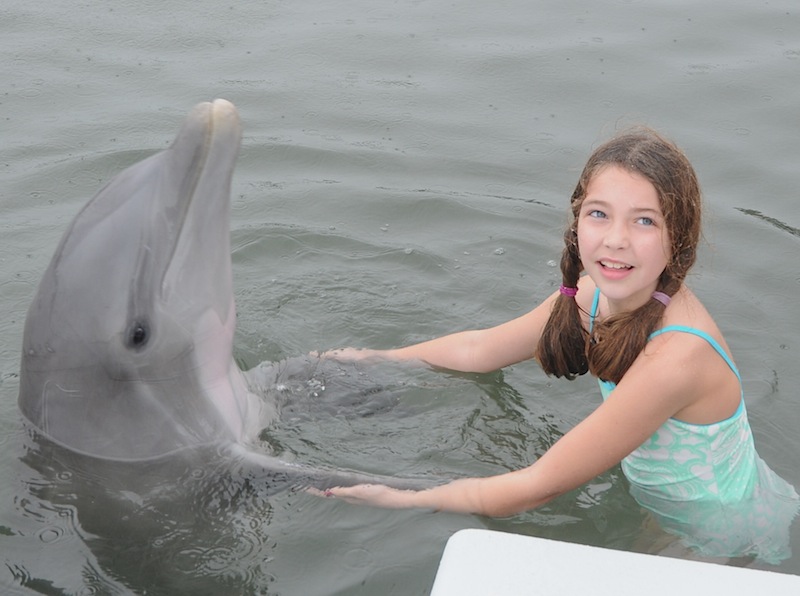 That very evening I happened to watch the documentary film Blackfish on Netflix, a must-see for anyone at all interested in cetaceans. It mostly tells the story of Tilikum, a wild killer whale who was captured off Iceland when he was young and has since been kept at first Sealand of the Pacific and later SeaWorld as a breeding stud and performer. During the course of his decades-long career, Tilikum has been involved in the deaths of three different people, most recently a trainer, Dawn Brancheau, whom he killed after a performance in February 2010. Footage of the incident doesn’t appear in the film, but at least one clip is available on YouTube:

The film makes a very powerful case that it is essentially immoral to hold any sentient marine mammal in captivity. The scenes in which female orcas are shown suffering intense grief after being separated from their calves are particularly heart-rending. Another incident covered in the film, also documented in this publicly released video, where a female orca effectively tortures and almost drowns a SeaWorld trainer, is also quite chilling:

I suppose it would be easy enough to draw distinctions between a wild orca like Tilikum and a “tame” bottlenose dolphin like Flagler, but let’s face it, slavery is slavery whether you are captured or born to it. And as a parent, in any event, my first concern after watching Blackfish wasn’t the morality of having paid to have my daughters play with a slave, but whether they might have been injured while doing so.

It may seem much easier to draw distinctions about this, in that dolphins seem inherently less dangerous than orcas, but on googling around I soon found there have in fact been a number of “accidents” during swim-with-dolphin encounters at “dolphinariums” like the DRC. Apparently none have resulted in fatalities, but there have been serious injuries involving lacerations and broken bones, and there has been at least one reported incident at the DRC itself. In one survey, over 50 percent of professionals working with captive marine mammals reported having been injured at some point by their charges.

Some of these putative acts of aggression may seem ambiguous. Witness the behavior in this video, in which a dolphin is seen repeatedly “play-biting” a swimmer’s arm:

But in other instances, there’s no doubt about what is happening:

Watching these, of course, I can’t help but think of that seemingly innocent incident that took place at the beginning of my daughters’ dolphin encounter, and all I can say now is that I feel deeply conflicted. Should I have pulled my girls right out of there? Was it a bad idea to put them in the water with that dolphin in the first place?

I really have no idea whether the dolphins at the DRC are happy or not. It may seem like they can leave whenever they want, but for all I know there may be other factors in play that prevent this. After watching Blackfish, I certainly don’t feel I can take at face value assertions made by people who run places like SeaWorld about the care and welfare of their animals.

Thanks mostly to those perpetual grins on their faces, it is easy to believe that dolphins are happy-go-lucky animals that love us just as much as we love them. It is what we want to believe. They are undeniably charismatic and obviously intelligent and thus are highly attractive to us. But we cannot assume that the positive emotions we feel for them are reciprocated, particularly in situations where we are effectively holding them in bondage. 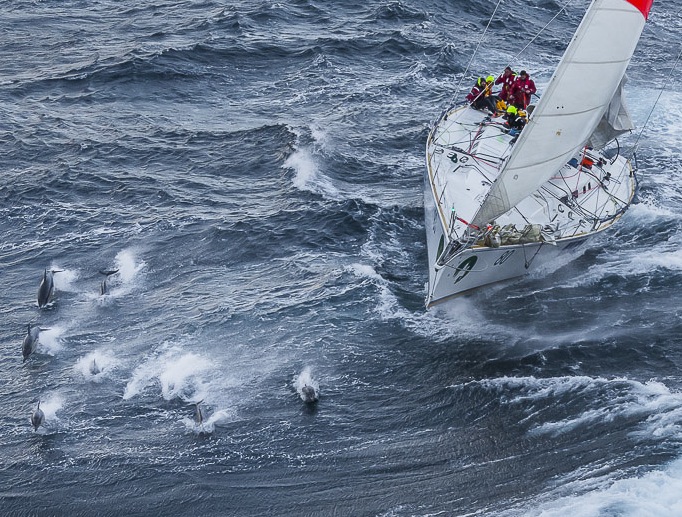 Dolphins greet the crew of Brindabella during the recent Sydney-Hobart race. Photo by Carlo Borlenghi

If you really care about dolphins, it may be the best way to demonstrate this is to simply admire them from a distance. Give them a big wave and cheer when they come to cavort at the bow of your boat. And by all means we should do what we can to help them cope with this awful disease that now afflicts them. But beyond that, if we want to physically interact with them, to actually lay hands on them, perhaps we should just wait for them to come to us. 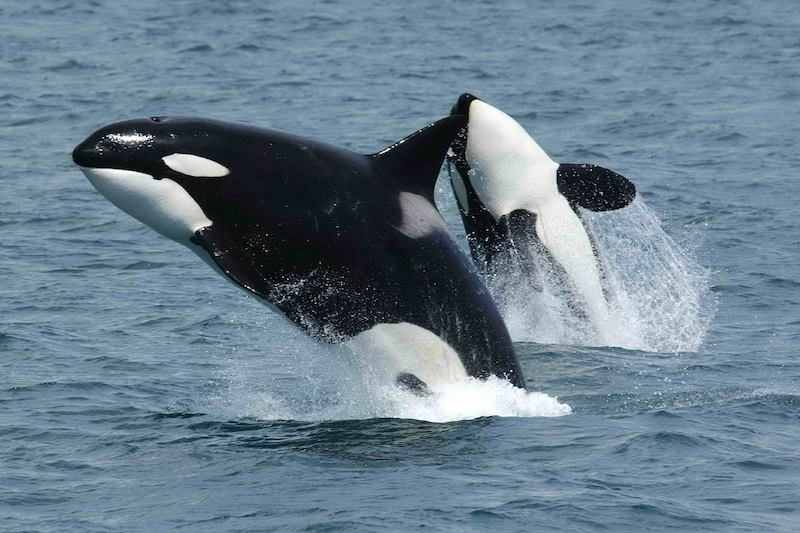 KILLER WHALES: Orcas Finally Living Up to the Their Names; Making Orchestrated Attacks Against Yachts 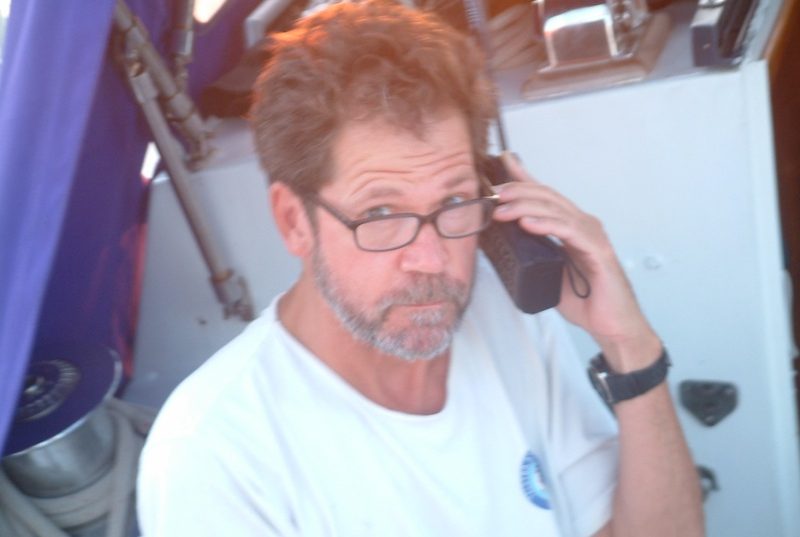 WITH THE FLOW: Escape From Bermuda