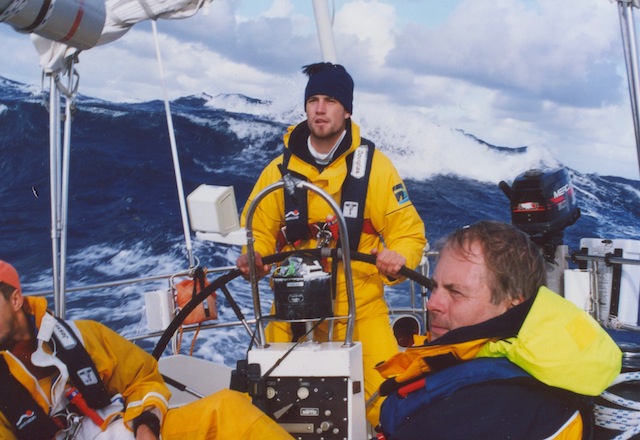 Back in the early days of singlehanded ocean racing, the winners of races like the Vendee Globe and the BOC Challenge were often the guys who slept the least and steered the most. Autopilots were useful in calm to moderate conditions, but once the waves were up you needed a live body on the wheel or tiller to achieve the fastest, smoothest ride. These days, however, the most sophisticated autopilots have “fuzzy logic” software and three-dimensional motion sensors and can steer in strong conditions just as well as, if not better than, most humans.

This sounds like a great excuse to spend less time on the wheel, assuming your boat has such an autopilot, but in the hairiest situations it’s still best to have a person in control. Modern autopilots can learn a boat’s handling characteristics and can sense a boat’s bow or stern rising to a wave, but they can’t perceive what’s going on around a boat. Once you’re in a big seaway where waves are routinely breaking, it’s best to have a helmsperson who can see and hear the rough stuff and steer around it. Also, of course, an autopilot needs electricity to function. If you’ve lost power, or have little to spare, you need a human on the wheel.

Some people are intimidated steering in big waves, but once you get the hang of it it can actually be a lot of fun. For experienced sailors, helming a boat through heavy seas, particularly downwind, is exhilarating, one of the peak experiences in the sport, and is something to look forward to.

Once wave heights are equal to or exceed your boat’s beam sailing on a square beam reach becomes less comfortable and less safe. Each passing wave may roll the boat badly and the threat of a knockdown or capsize will increase as the seas grow larger. Sailing dead downwind in very large seas can also be a bad idea. The boat, again, may roll badly, and it is easier for a following sea to throw the stern far enough off line to backwind a sail, which in turn can lead to a bad broach and perhaps a knockdown or capsize.

The safest way to transit large seas is by quartering them, sailing upwind or running off on a broad reach with the boat running at an angle to the waves. This attitude minimizes rolling, reduces the chance of a sail being backwinded, and makes it easier for the helmsperson to maintain control and steer around the breaking portions of waves. When sailing over large waves at an angle, the fastest, smoothest course is not a straight line. Instead you want to scull the waves, sailing more of a scalloped horizontal course that matches the vertical shape of the seas.

This technique is particularly important when sailing upwind. Beating to weather in heavy seas, a poor helmsperson who doesn’t scull the waves properly will often bring the boat to a near standstill by pinching too close to the wind or will fall off the wind too far and let the boat get pushed down on to a beam reach. To prevent this you need to fall into a simple pattern, pinching the boat to weather as it approaches a wave crest and bearing away again as it sails down the back of the wave into the trough behind it.

Sailing off the wind, to achieve the same result, you need to reverse the pattern. As a wave crest approaches the stern of the boat, you should bear away a bit, and once the crest is past you should head up.

The end result in both cases is the same: at the wave crest the boat is depowered, with the bow or stern closer to the eye of the wind; heading down into the trough the apparent wind angle is increased and the boat is more powered up. Sailing to windward this allows a boat to get over the top of each wave with less resistance and reduces the chance of it flying off crests and slamming down into troughs. Sailing off the wind, it keeps the hull flatter as the wave crests approach, reduces torsional twist on the stern that can lead to a broach, and sets the boat up to perhaps surf down the front of the wave. Powering up the boat as it heads into the troughs in both cases increases control and speed, so you can more easily avoid obstacles and negotiate the next wave crest as it approaches. 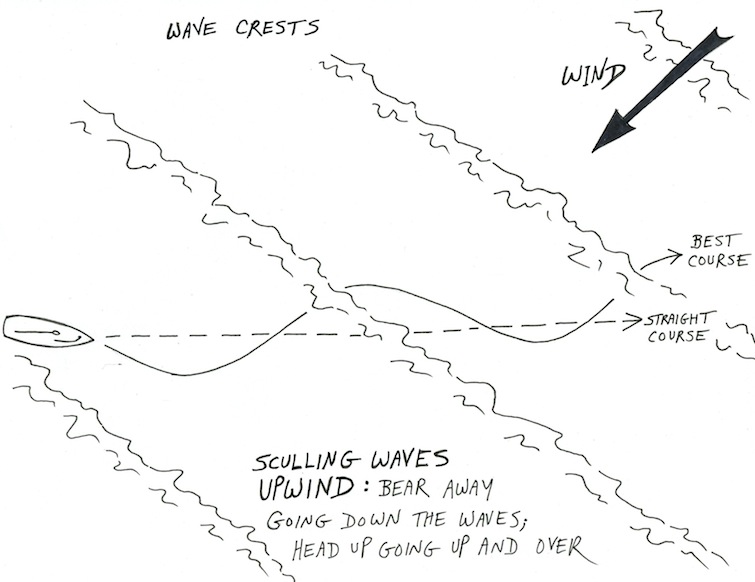 These illustrations show a simplified view of wave-sculling courses upwind and downwind with the course adjustments exaggerated a bit for clarity. As a general rule, larger waves require larger corrections. In the real world wave patterns are also normally less organized, with two or more wave trains interacting with each other. Steering over or around offline waves, and of course avoiding breaking waves when possible, will require additional course adjustments. 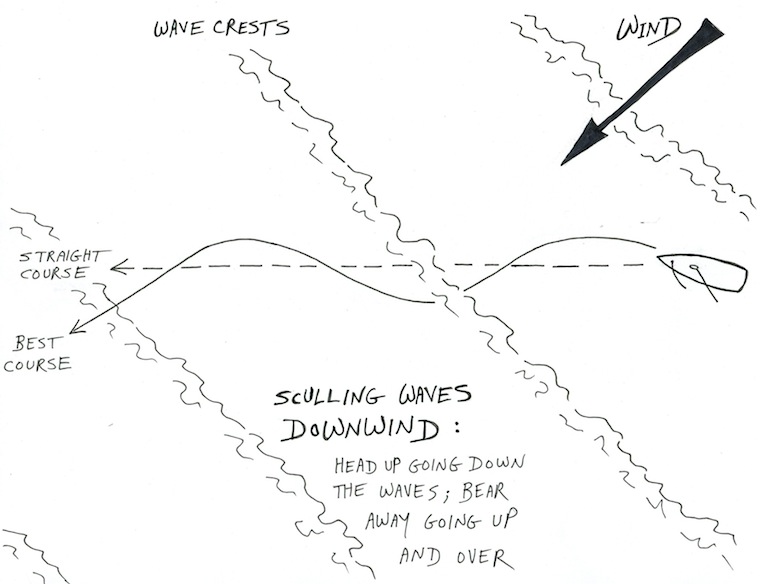 Another factor not accounted for here is surfing downwind. This can happen a little bit even in traditional heavy-displacement boats, but is quite common when sailing modern light-displacement boats with shallow bilges. Once a hull breaks loose and starts surfing on a wave, you are basically riding the wave crest. On many boats you will simply maintain course while surfing and then head up a bit after the crest passes to set up for the next wave. On some faster boats, you may want to head up a bit while surfing to make up for the loss of apparent wind speed and to keep the boat surfing longer.

The best autopilots now automatically scull waves as they steer a boat through heavy seas. The best helmspersons do exactly the same thing–they feel the boat under them as they steer and instinctively scull the waves, whether they are conscious of what they are doing or not. Even if you are not a naturally talented helmsperson, you can learn to do this with a bit of practice.

When steering in large waves, body position is particularly important. You need to find a posture in which you can both comfortably grasp the wheel or tiller and can easily feel how the boat is moving under you. This is largely subjective and different people steer better in different positions. Some people can feel a boat easily through their butts and can sit while steering; many more feel a boat best while standing with their legs spread wide. Compromise positions, where you sit with one leg braced against a vertical cockpit feature, like a coaming, footwell side or wheel pedestal, can also be effective. 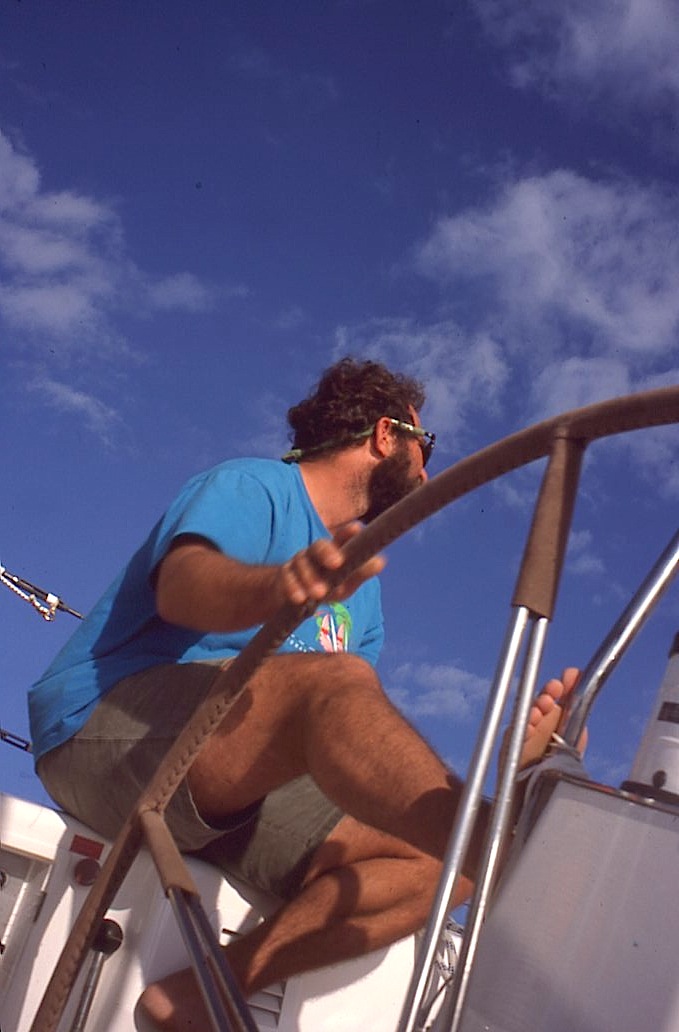 Vision, of course, also plays a role. Steering to windward in daylight you can easily see approaching waves and can make course adjustments accordingly. If you don’t scull waves instinctively, this is usually the best way to learn. When steering downwind with the waves behind you, or at night, you must rely more on other cues.

Motion is the biggest one. As a wave crest approaches you will feel your boat’s bow or stern rise with it, and once you are practiced the nature of this motion can tell you a great deal. Depending on its speed and torsional twist, you can sense the size and shape of each wave and its direction relative to other waves around it and should be able to steer the cleanest course over or, in some cases, around it.

You also need to keep your ears open. In daylight you can look around to see what waves are breaking. At night you have to listen for them. This doesn’t provide as much warning and your response time will be degraded, but sometimes you can at least minimize the effect of a wave breaking over the boat. Listening to the pattern of noises waves make as they pass in conjunction with the motion you feel can also tell you something about the size and angle of an approaching wave, even if it isn’t breaking.

To get good at this, you need to practice, and you shouldn’t wait until conditions are extreme to start. Switch off your autopilot when the seas get rough and take a long turn at the wheel. A great way to get all-round experience is to do a passage with crew and pretend you don’t even have an autopilot. Take turns steering and let your electronic friend take a break. There’s no reason why it should be having all the fun! 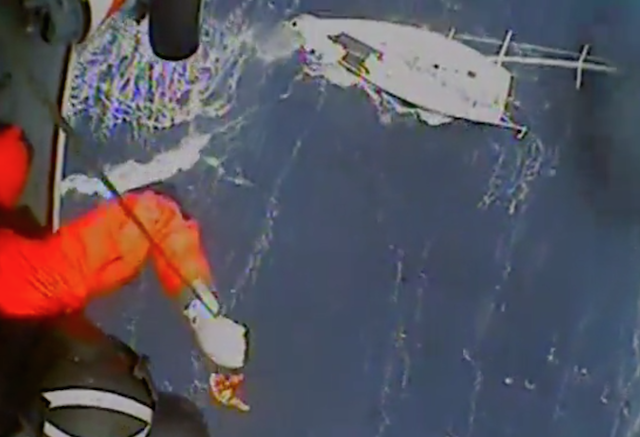