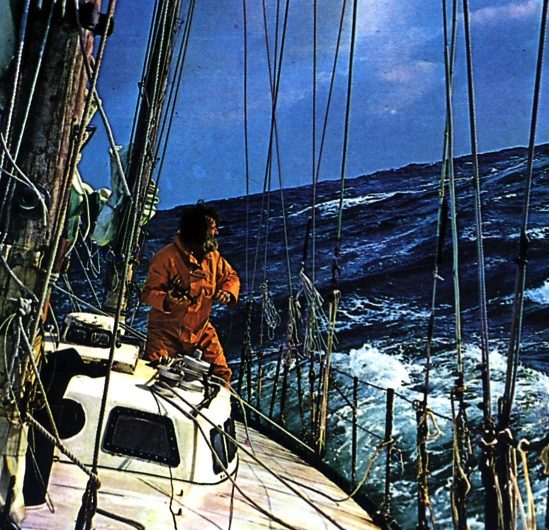 Bernard Moitessier is remembered primarily for his famous 1968-69 Golden Globe voyage, in which he blew off a chance to win the first non-stop singlehanded round-the-world race and kept on sailing halfway around the world again to Tahiti to “save his soul.” But he is also remembered for wrecking not one, but three different boats during the course of his sailing career. As is documented in his first book, Sailing to the Reefs (Un Vagabond des Mers Sud in the original French), he lost two boats named Marie-Therese sailing on to reefs in the Indian Ocean and in the Caribbean in 1952 and 1958. Much later, in 1982, he lost Joshua, the 40-foot steel ketch that made him famous, on a beach at Cabo San Lucas in Mexico.

Moitessier had sailed to Mexico from San Francisco with Klaus Kinski, the notoriously unstable German actor who at the time was very well known for his roles in films directed by Werner Herzog. Kinski had paid to come along so Moitessier could teach him about ocean sailing. Five days after the pair reached Cabo, on the night of December 8, Joshua and 25 other boats in the anchorage were blown ashore in a freak storm. 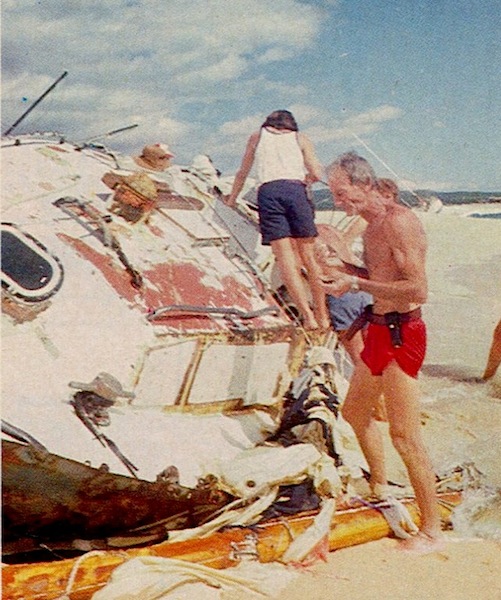 Moitessier on the beach with Joshua the morning after the storm

Moitessier wrote a full account of the incident, which was published in the March 1983 issue of Cruising World magazine. In it he gives a detailed description of how he and Kinski were blown on to the beach with the boat:

At sunset, the wind blows from the southeast, not too strong, but I don’t like it. Then it increases. No stars. Then it increases again. I know (I think I know…) that it cannot last in this season but I am pleased with my decision to get the second anchor ready.

Still there is a strange feeling in my guts.

Sometime later in the night, the wind becomes much stronger and there is a big swell. I am on deck, wondering. Then, a strong gust of wind. Now I am seriously worried. This is bad weather.

Suddenly, the 55-pound CQR drags on the coarse, sandy bottom. I let go the second anchor and Joshua faces the wind again. The swell has increased a lot.

Another gust, real strong. It seems that it lasts forever. My God, Joshua is dragging again, fast!

Very soon after this, we are on the beach. The rudder touches first. Then the boat pivots slowly. Now it is laying over, sideways on the beach with heavy seas breaking on the deck, which is canted away from the beach.

My mind still refuses to believe it… but this is the hard, very hard reality. Open your eyes, you monkey, your boat is on the beach; open your eyes, you stupid monkey, and don’t pretend that you did not know that this could happen.

And so on. Moitessier goes on at great length to describe an argument, with much quoted dialogue, wherein he insists that Kinski leave the boat, and Kinski refuses. Finally the quarrelsome actor is persuaded to go ashore, and the story continues, with a detailed description of what it was like for Moitessier being aboard alone as his boat’s rig came down, as other boats piled into her, etc., etc.

All of it gripping stuff, and so the story was passed on. It reappeared in consistent form in Moitessier’s last book, his autobiography, Tamata and the Alliance, published in 1993, and also in a biography, Moitessier: A Sailing Legend, by Jean-Michel Barrault, which was published in 2004.

I heard a very different version, however, from Lin and Larry Pardey, who flew into Cabo to cover the disaster for SAIL magazine immediately afterwards. According to the Pardeys, Moitessier instantly confessed to them that he and Kinski had been up in a hotel room partying their brains out while his beloved boat was driven ashore untended. He urged them at first to share the true story with their readers, so everyone would understand what an idiot he had been–“a monkey,” as he always liked to put it–but then later changed his mind and gave them the fiction that has since been handed down in print.

The Pardeys were good friends with Moitessier, so they went along with this, though obviously they have been willing to share the true story privately. I thought of this again recently, when discussing the Pardeys with Cruising World‘s Herb McCormick, who has just written a biography of the famous cruising duo, As Long As It’s Fun, that is due to be published next month. I urge you to check it out once it’s available, as I expect you’ll find this and many other titillating tales from the golden age of cruising buried in its pages. 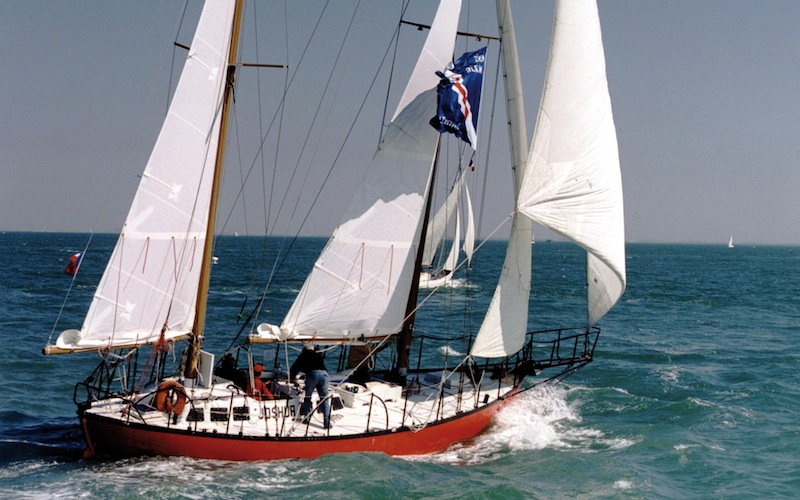 And on the hard, waiting for a scrub. Note how very long her keel is

Meanwhile, of course, Joshua didn’t die on that beach in Mexico. Moitessier felt he couldn’t cope with salvaging and refitting the boat, so he gave her away on the spot (technically, he sold her for $20), and she has since landed at the La Rochelle Maritime Museum in France, where since 1990 she has been scrupulously maintained and exercised on a regular basis. Here’s a fine video that gives a good sense of what it’s like sailing aboard her these days:

And here’s another viddy with lots of film footage that Moitessier shot during his great voyage in 1968-69. It’s utterly fantastic stuff, particularly the shots from up the mast, where you can see how much sail he crowded on. What’s particularly impressive is how he laced a big bonnet on to his genoa to maximize area:

Some may recall that Joshua also became the center of a mini-controversy that erupted in 2000 when she was hijacked by a French sailor, Jacques Peignon, who raced her singlehanded in that year’s Europe 1/New Man STAR transatlantic race without the Maritime Museum’s permission. 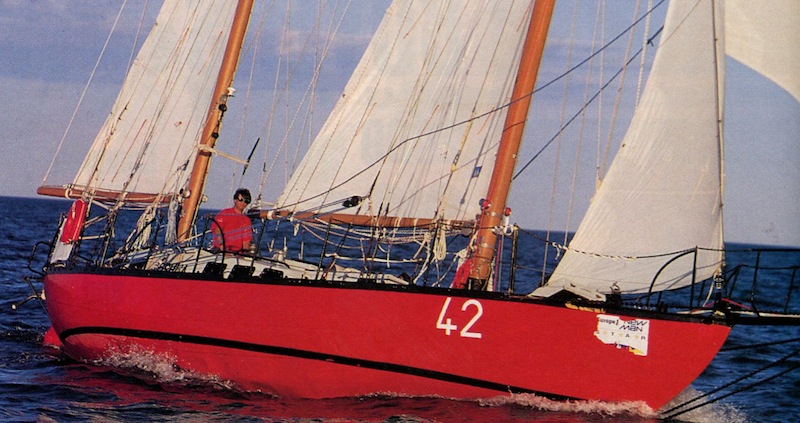 Peignon finishes the 2000 STAR aboard Joshua in Newport, Rhode Island, after “borrowing” her from her owners

The gutsy singlehander was greeted by angry museum officials when he stepped ashore in Newport and wasn’t allowed to sail the boat back to France. Instead the museum found a delivery crew, which included Moitessier’s son, Stephan, who had never before done an offshore passage. 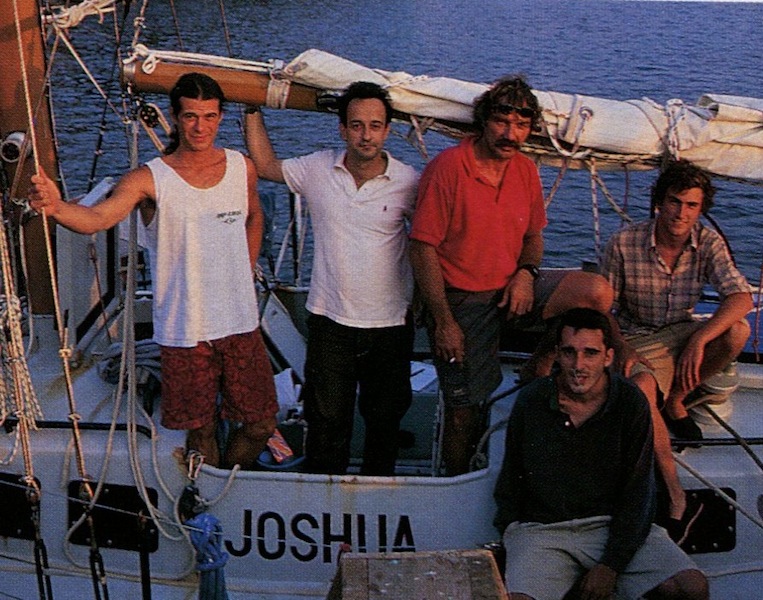 I met Stephan, who works as a photographer and videographer, in New York City in 2002, while he was helping Reid Stowe prepare his schooner Anne for his 1,000 Day Voyage. Stephan was reluctant to talk much about his father, but he did say he very much enjoyed his voyage aboard Joshua. At the time he was looking to get aboard other boats to do more passages, but I don’t know if much ever came of that. 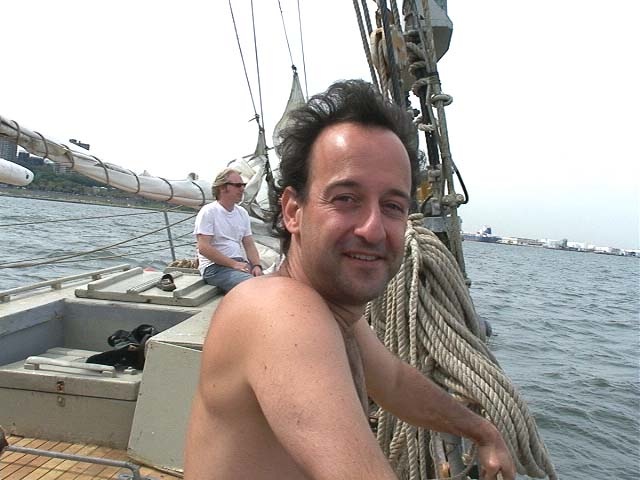 Stephan Moitessier aboard the schooner Anne in New York Harbor

As for the famous Bernard, what are we to make of the fact that he flat-out lied to the world about what really happened that night in Mexico? I really think age had a great deal to do with it. If you read Sailing to the Reefs, you’ll see he was perfectly honest (or at least appears to be) about the mistakes he made that led to his first two shipwrecks. What was truly remarkable about those losses was how quickly he rebounded from them and rebuilt again from nothing. By the time he lost Joshua, however, he didn’t have nearly as much energy (he said as much in his story in Cruising World), and I think he knew, consciously or not, that all he had left really was the fame he had earned when he was younger. 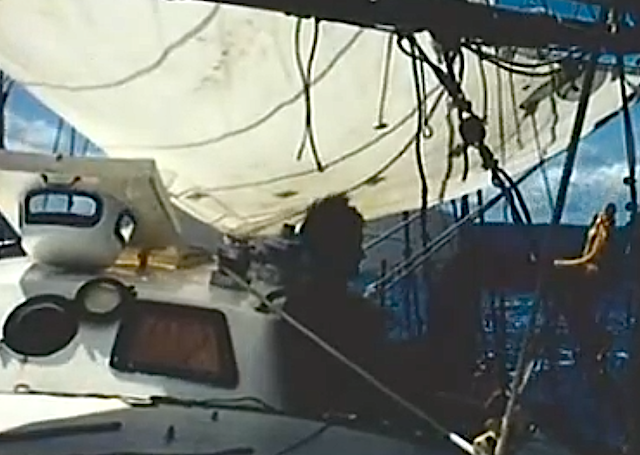 Bernard Moitessier alone aboard Joshua during the Golden Globe Race

He didn’t care what others thought when he decided to save his soul during the Golden Globe Race. But he obviously cared a great deal about his reputation when he spoke with Lin and Larry Pardey in Mexico, and he was willing to sell his soul to preserve it.

BONUS VIDEO: This features an interview with Moitessier in English aboard Joshua, with several highlights from his life. You’ll see towards the end several glimpses of Stephan as a boy: