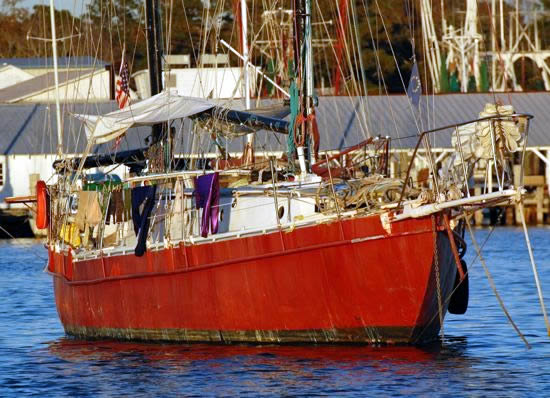 Ever since the days of Bernard Moitessier, it has been a tired cliche that French liveaboard cruisers are dumpster-diving freeloaders who have no respect for authority and believe the world owes them a living. I have met many French cruisers in my day, some of whom have poked fun at this cliche, but I’ve never met any who actually lived up to it. But then I’ve never met Pascal Ott and Monique Christmann, who have been living aboard their red steel ketch Primadonna in Oriental, North Carolina, for over a year now, though I have been reading about them on the local community website.

I stopped at Oriental years ago on a trip down the ICW and found it to be one of the most cruiser-friendly towns in all of North America. We’re talking hospitality with a capital H. Now, perversely, it seems the town is being punished for its generous attitude.

When the couple arrived on the scene last fall, they told locals they had just sailed through Hurricane Sandy and had tried to assist in rescuing the crew of HMS Bounty. Which pretty clearly was a total crock.

According to the U.S. Navy, Primadonna received assistance from one of its vessels on September 12 off Norfolk, Virginia, and the crew at that time told Navy personnel they were three weeks out of Bermuda and had suffered damage in Hurricane Leslie. (This probably was a crock, too, as Leslie actually had passed well east of Bermuda as a tropical storm three days earlier.) The Navy provided Primadonna with food, water, diesel fuel, and a chart. According to a comment posted to the Navy’s online report of the encounter, a Royal Caribbean cruise ship also provided Primadonna‘s crew with fuel, food, and water four days earlier on September 8.

According to the visa stamp in Monique Christmann’s passport, Primadonna in fact cleared customs and immigration in Norfolk on September 14, two days after meeting the Navy offshore and more than a month before Hurricane Sandy ever showed up. 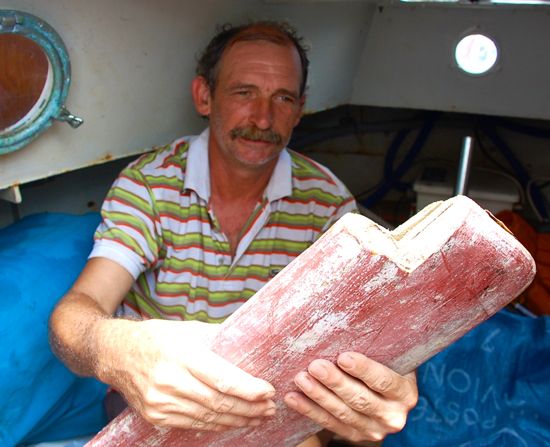 Pascal Ott with his Aries windvane servo oar, which he claims was attacked by a shark… which evidently had a very square mouth 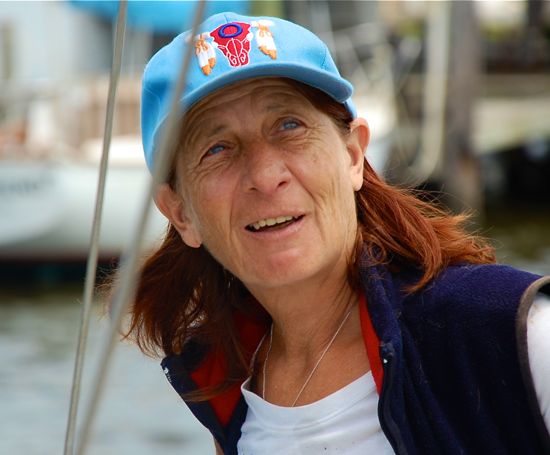 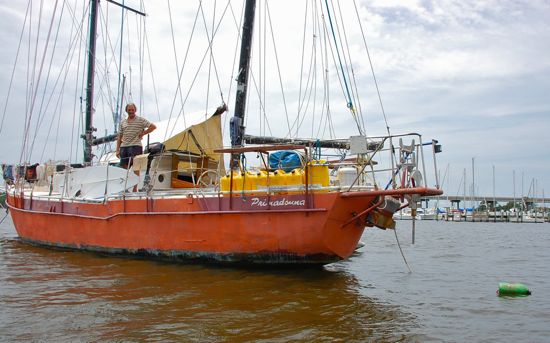 Pascal also claims that Primadonna is a sistership to Moitessier’s famous red ketch Joshua, which seems unlikely given that Joshua was double-ended with an outboard rudder and had no kink in her sheerline. Pascal says all he needs to leave town is a starter motor, 10 gallons of diesel, and a ball of twine

Since arriving in Oriental, Monique has been popped for shoplifting (the charges were dropped) and Pascal has passed a bad check and hung up a local store clerk for nearly $3,000 (no charges have been brought yet). Evidently, they’ve been feeding themselves courtesy of a local church group, have overstayed their visas, and have generally pissed off most people in town. The French consulate says they can do nothing and U.S. immigration authorities don’t seem particularly interested in them.

Winter is coming on and it seems likely these parasites aren’t going anywhere for a while. Anyone heading through Oriental on their way south this fall should be sure to give Primadonna a big thumbs-down if they see her. Never mind the buzz about the French; these people are giving cruisers everywhere a bad name.

(Listening to: Shoplifters of the World Unite, The Smiths, 1987)