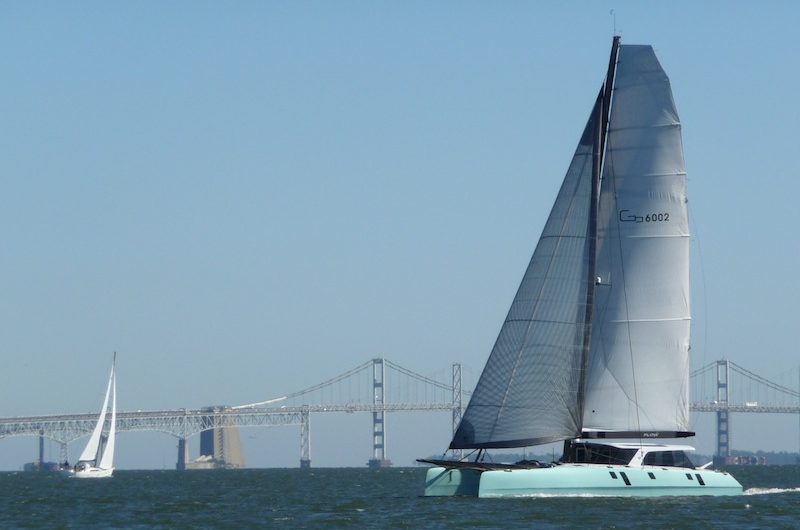 My post-Annapolis test-sailing dance card had a great mix of boats on it this year. At the total opposite end of the spectrum from the simple and diminutive Paine 14, I found this high-end sweetheart. Like many of you, I’ve been reading about Gunboats for years and have walked through a few tied to docks, but I’ve never actually sailed one, so I was looking very forward to this test. It is, however, an ineluctable law of sailing journalism that the more you look forward to test-sailing a boat, the less wind there will be during the test. Case in point: when Peter Johnstone plucked me off a dinghy dock in Eastport in one of his fancy Pure tenders and swooped me out to the Gunboat 60 way out in the middle of Chesapeake Bay, the true wind was only blowing about 5 knots.

I studied the bay’s glassy surface, and my heart sank, but Peter didn’t seem particularly concerned. Sure enough, as soon as we boarded the boat and unrolled its big black carbon screecher, we were trundling easily upwind at speeds in excess of 6 knots. A little later, when the true wind piped up to 7 knots, we were running off under an A-sail at 8 knots.

So yes, my friends. This performance cruising cat–constructed of carbon and epoxy, with a rotating carbon mast, and elegantly appointed within–does indeed sail like a witch. 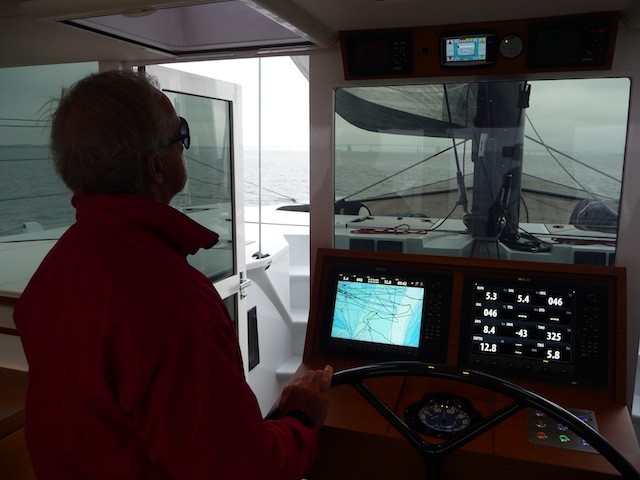 A prospective customer takes the wheel. From the inside helm station it’s easy to keep an eye on the headsail telltales, and you can spot the main through the overhead hatches. You’ll note the spaghetti track on the chartplotter left over from two days of test sails

But that’s not what impressed me most. It was the systems that really blew me away. Those of you who read this blog much too closely may recall I recently referenced a story I wrote for the print comic almost 10 years ago, in which I fantasized about what cruising sailboats might be like in the year 2040. In addition to hypothesizing a remote anchoring drone, I also imagined that all working and standing rig loads would be digitally monitored and that boats would able to literally sail themselves.

No, this Gunboat can’t quite do that. But it’s heading in that direction. It has a true distributed-power system, with full-on digital switching, and load-sensors on all the rigging, so that all working loads can be monitored in real time when sailing. To keep the boat from capsizing, or even from flying a hull (a distinct possibility), you can set all the sheets to release automatically when rig loads hit a pre-set limit.

With the mainsheet, this is done hydraulically. (There are also three different “manual” release buttons for the main, located in strategic spots, so you can instantly blow the hydraulically controlled mainsheet whenever necessary.) With headsail sheets, it is done electrically, as the cam cleats have little switches that cause them to flick up and throw their lines loose when the auto-release system is activated. 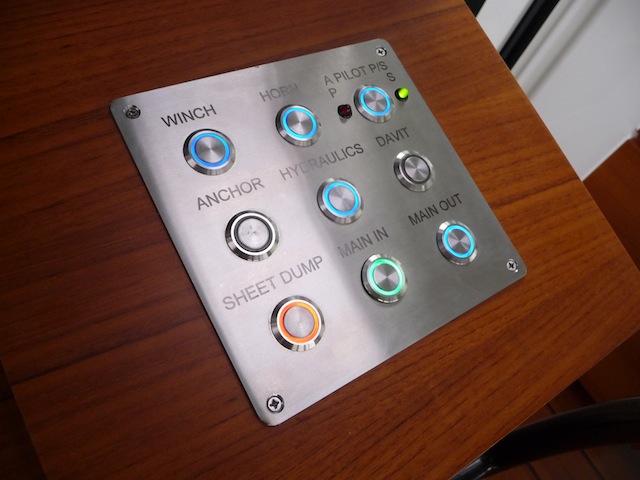 Hydraulic control panel at the inside helm station. You can trim the main from here, or blow it altogether, just by pressing buttons. There’s another “sheet dump” button at the nav desk and one in the working cockpit forward of the house 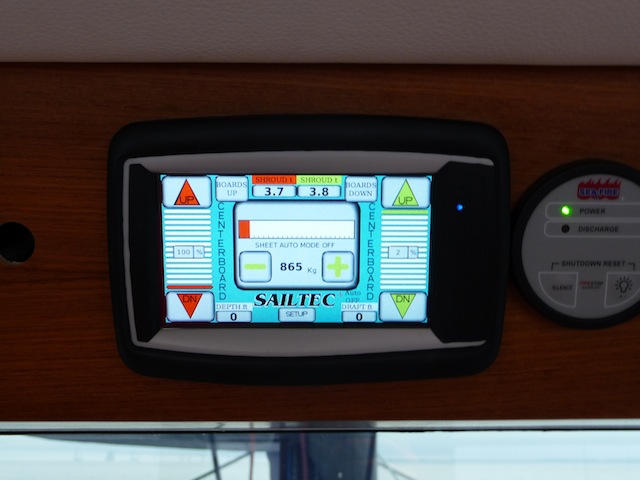 This touch-screen above the helm station controls the centerboards and monitors rig loads. You can set alarms here to automatically blow the sheets if loads get too high 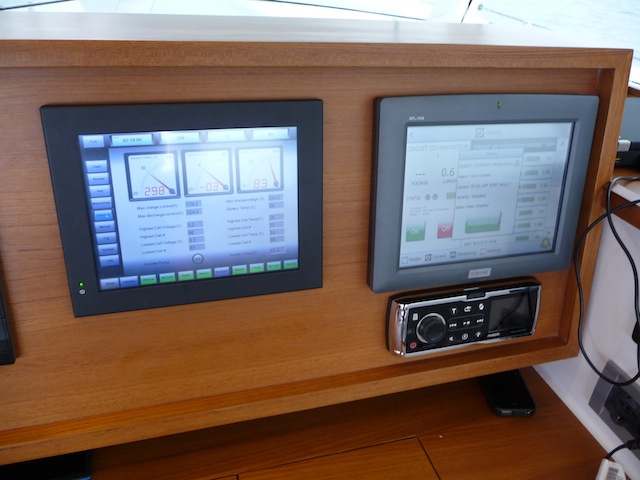 The nerve center of the distributed power system. These two touch-screens at the nav desk control most of the boat’s systems 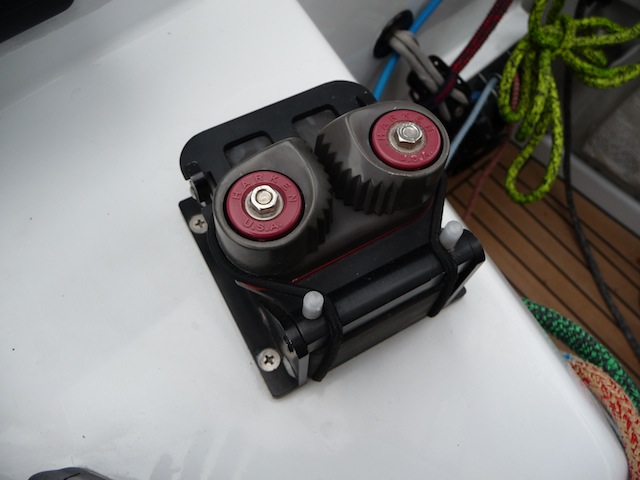 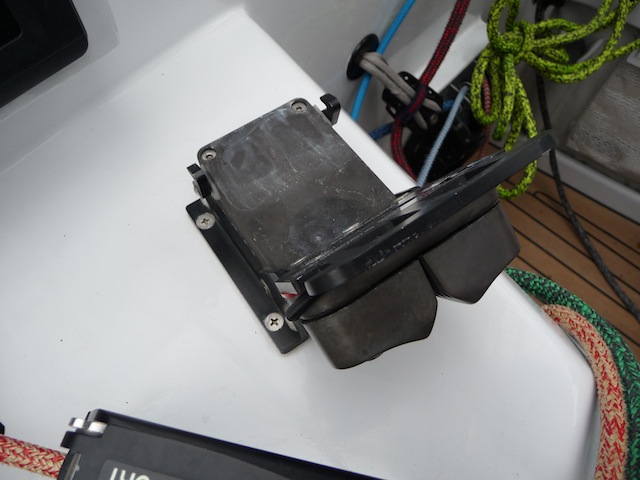 The boat also has a true hybrid regenerative-power propulsion system. There are electric motors in each hull turning the props, which are mounted on retractable drive legs. When motoring the props are run straight off the 23kW lithium-ion-phosphate battery bank, and if the batts get low, a diesel generator automatically kicks on to keep them charged up. When sailing, you can leave the props down and spinning (usually just the leeward one) and they will act as water generators, sending power back to the batteries. If the batts don’t need help, you can pull the props up and sail all the faster.

Another interesting feature: this Gunboat has centerboards instead of daggerboards. Peter tells me he finally grew weary of tales of Gunboat owners banging up boards and more during groundings and has become a centerboard evangelist. On this Gunboat 60 they are controlled with hydraulic rams, so the boards can be set at any depth and angle, with shear pins on the rams so the boards can kick up when they hit something. 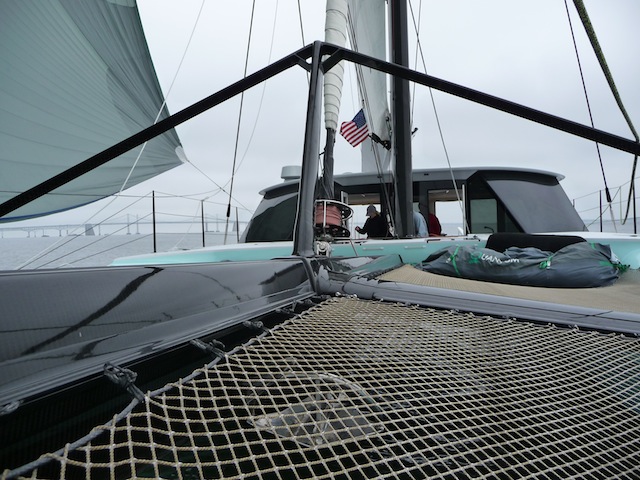 Flying under the A-sail as we head back toward Annapolis 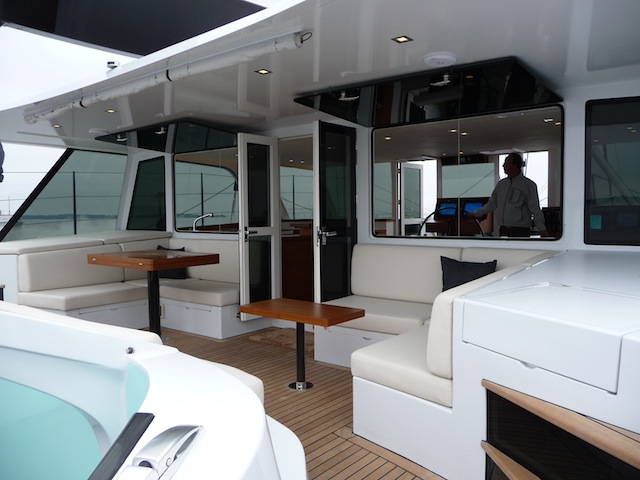 The spacious aft cockpit is strictly for hanging out. Note all the open doors and windows, front and back, that allow the breeze to blow right through all of the main saloon. That’s Peter inside at the wheel

All this (plus, of course, a sumptuous interior with lots of room for guests and crew) is yours for a mere $3 million, give or take. Which is a small fortune, I know, but if you go out and poke a bit at other boats in the same price range, I think you’ll find this one is a very good deal.

Look for more info and impressions in a future issue of SAIL.

0Shares
boat testcatamaranssailboat review
Previous PostCOLLISION AVOIDANCE: How To Get Run Down By A ShipNext PostDEADBEAT FRENCH CRUISERS: Primadonna in Oriental