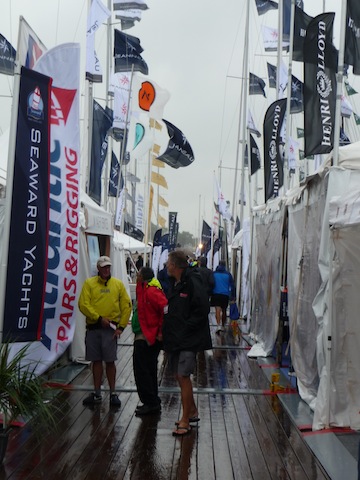 The big in-the-water show here in Annapolis is featuring a lot of the in-the-air water this year. We suffered a biblical downpour yesterday morning that continued sputtering on and off through the day. I was forced to invest in new Helly Hansen boots and an umbrella on the sperm of the moment…

…but many other showgoers and exhibitors were better prepared and put together more coordinated wet-weather fashion ensembles. 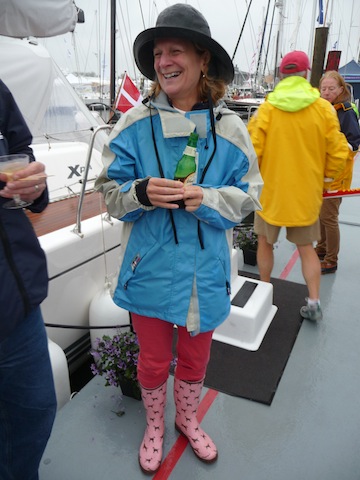 As soon as I got into the show I made a beeline for Chris White’s new Atlantic 47 catamaran, as I was curious to see how his new MastFoil rig works in real life. 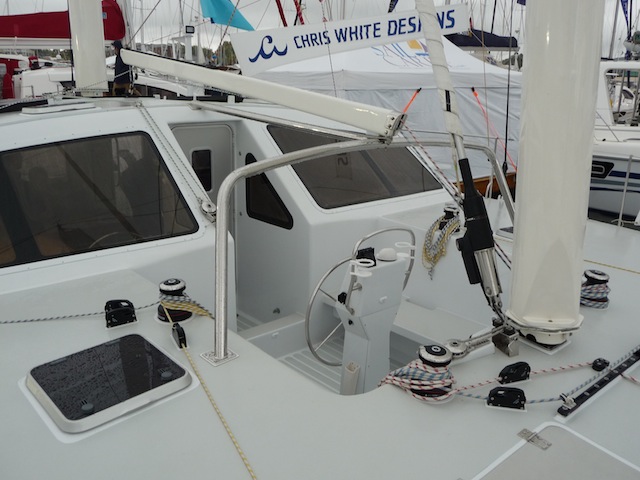 Like all Atlantic cats, this new one has its working cockpit forward of the house. Except here, you’ll note there are few control lines, as the only two sails to worry about are a pair of rolling-furling self-tacking jibs. 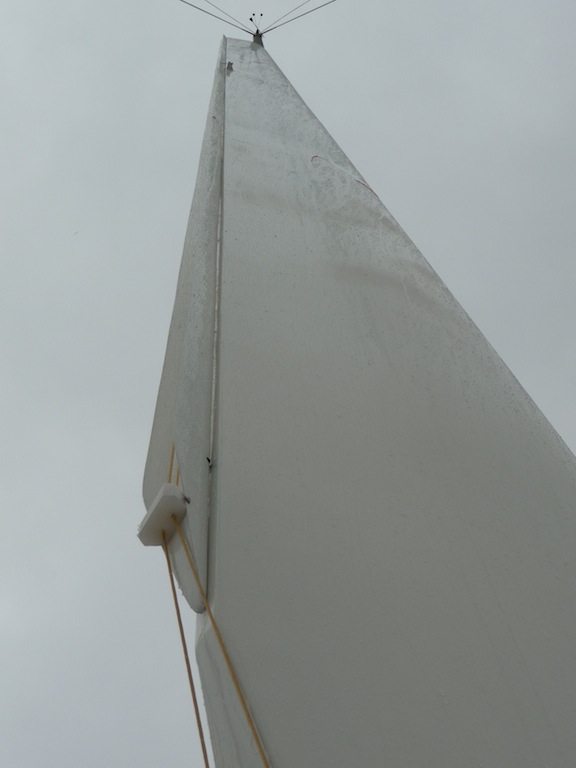 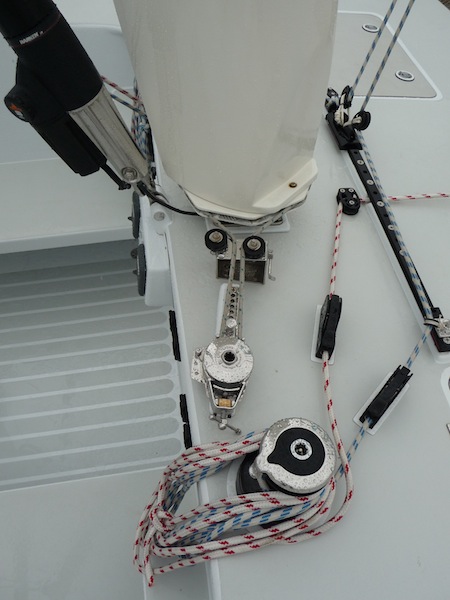 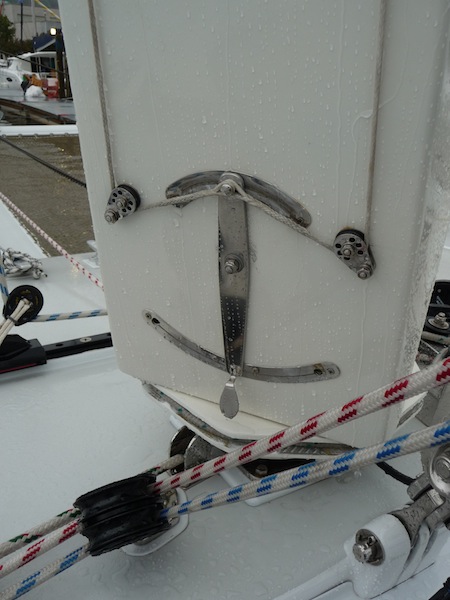 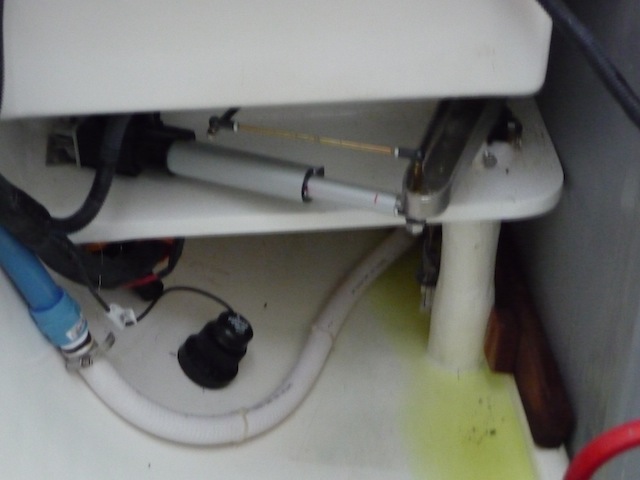 There are also flaps on the back of the two fixed keels to help them generate more lift. Here you see the control mechanism for one of those. Apparently I wasn’t the only one interested in this boat, as I heard later that Jimmy Spithill, of recent America’s Cup fame, who roamed the show a bit yesterday and is speaking today, also took a tour and is keen on it. 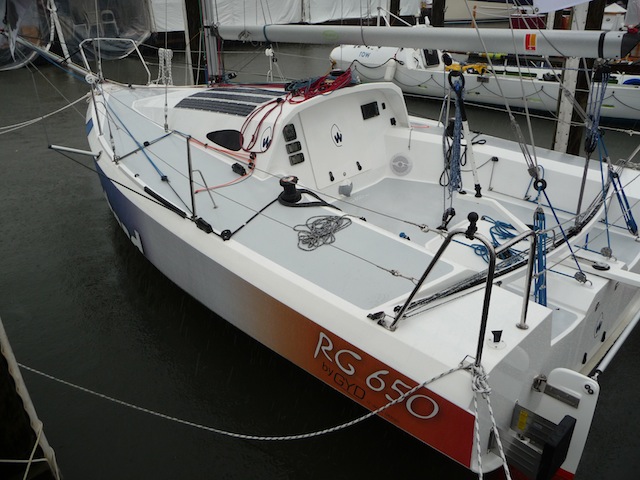 Here’s a hot new Mini I found, in case you want to sign up quick for the Mini Transat. 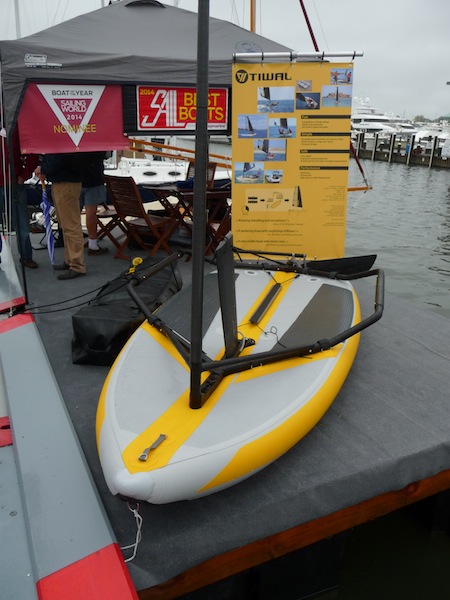 The new Tiwal, an inflatable sailboat that actually looks like it will sail very well. It weighs 100 pounds and can be assembled in 20 minutes. 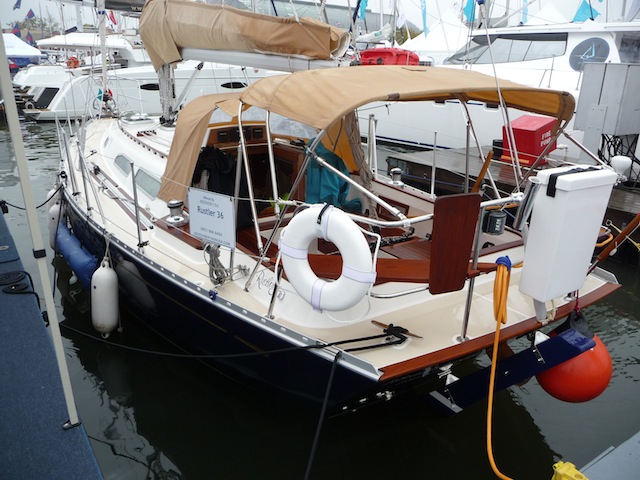 The Rustler 36 is a British boat I’ve long admired. It’s been in production forever, but this is the first new one ever to appear over here. It’s a sweet traditional full-keel cruising boat of modest size, but will set you back almost half a million dollars. 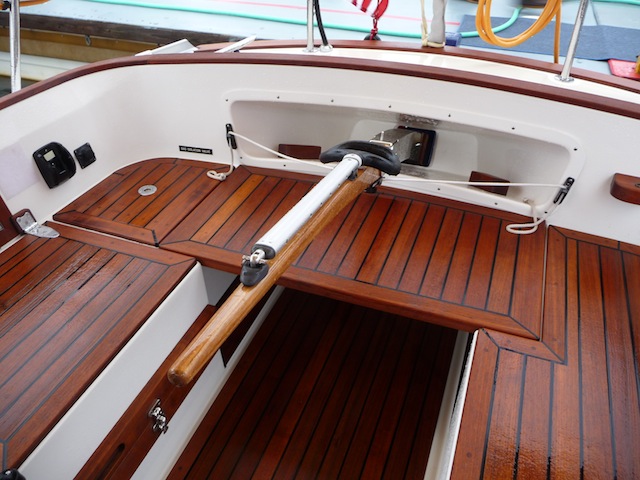 The transom-hung rudder is tiller-steered, with the tiller brought through the transom and set in this unique coaming box. 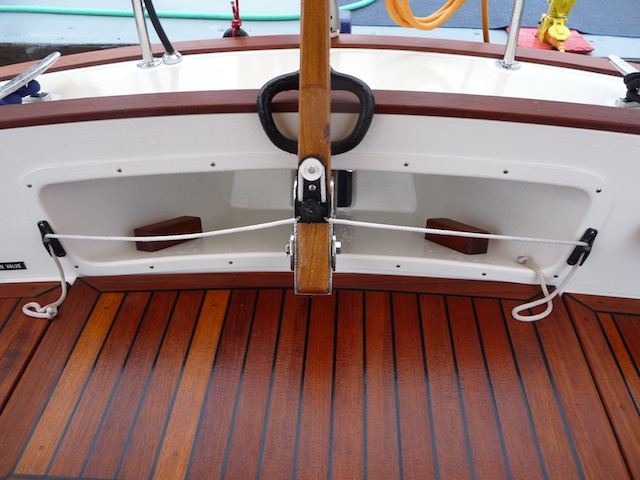 The tiller flips up out of the way when you’re in port, and there’s a nifty control line underneath so you can lock it in place. 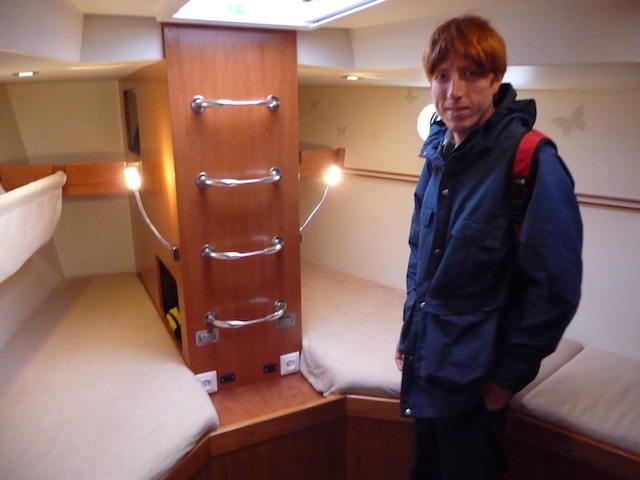 This is Paul Calder (son of Nigel, who I’m rooming with this year) showing off the cool forepeak arrangement on the Allures 45, an aluminum centerboard cruiser from France. There are two fixed berth/settees, two pipe berths over them, plus a fold-down table (not shown), so you can stash a horde of kids or guests in here if you want. Or just use it as vast sail and gear locker. 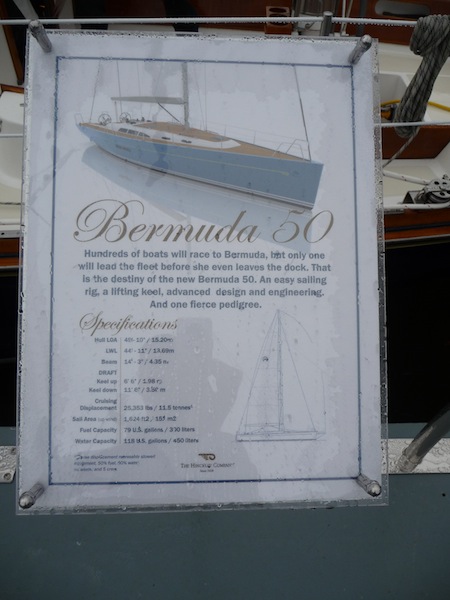 Hinckley (remember them?) made a big announcement late in the day. They’re a building a new boat. As in a whole new design… the first one (other than a daysailer) since God knows when. It looks to be very modern, drawn by Bill Tripp (not the dead one, but his son). 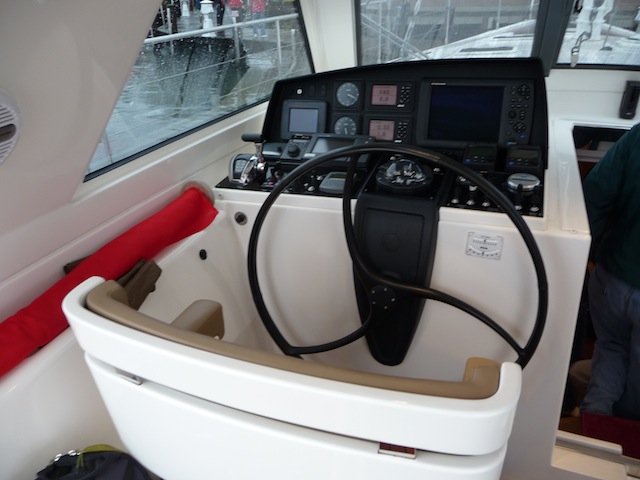 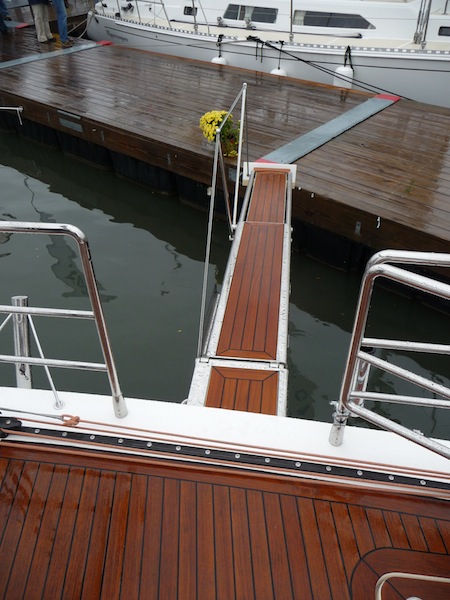 There’s also a retractable passarelle that sprouts out of the transom, which also boasts a huge dinghy garage. 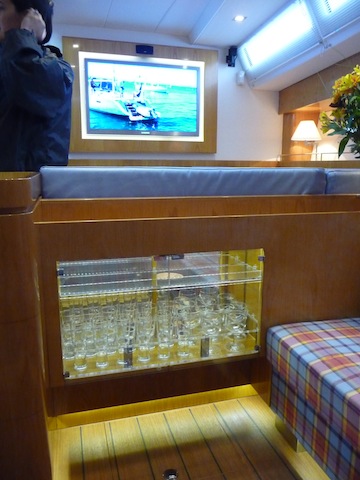 The interior has all sorts of fab features, including a split saloon with an enormous flat-screen TV and this elegant, prominently placed glass display cabinet for storing stemware. Looks nice, but I’d hate to be around when someone or something smashes through it while the boat is bouncing around in a seaway. 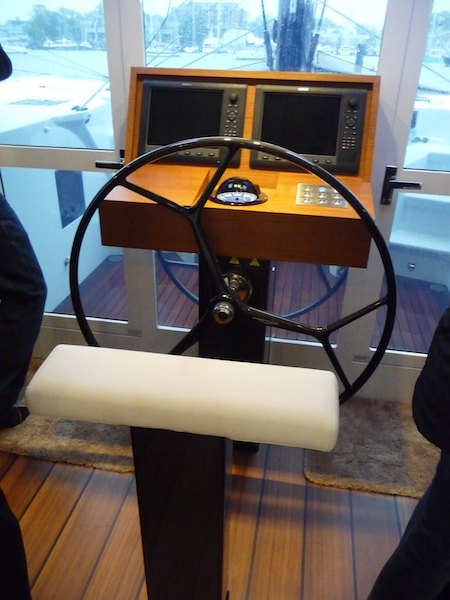 I love this inside steering station on the new Gunboat 60. There’s a great view forward, and the wheel connects directly to the one outside. 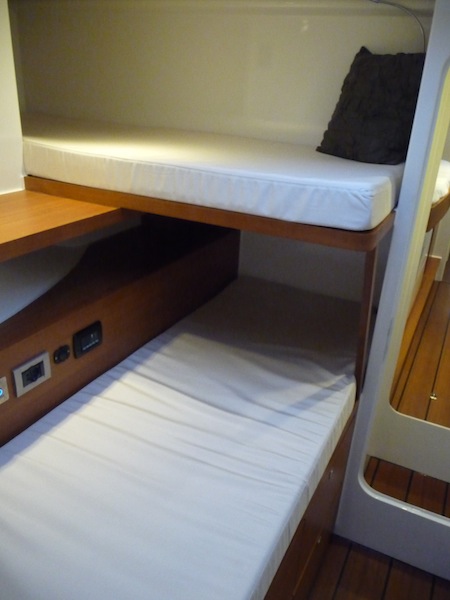 I also liked the arrangement of these two single berths below. (In case you haven’t noticed, I’ve been on a crusade for a while now: more single berths on modern boats! I think it’s finally beginning to work.)

One boat I found so interesting that I apparently forgot to photograph it (insert dope-slap here) was the new Catalina 275 sportboat. It looks to be a fun, easy-to-sail race boat that the family can also enjoy daysailing, for not too much money–just about $75K.

Be sure to check it out if you’re at the show today. And be sure to wear your snorkel, as it’s still raining out there!