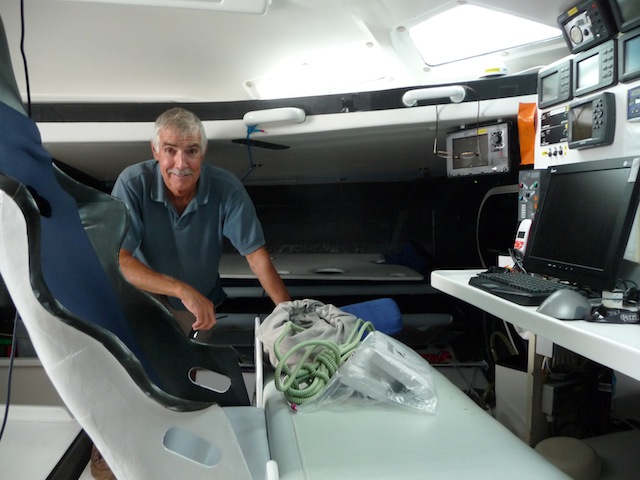 I stopped by Maine Yacht Center in Portland earlier this week for a quick visit with Rich Wilson aboard his new Open 60 Great American IV, ex-Mirabaud. Rich, you may recall, became only the second American ever to finish the Vendee Globe back in 2009, at age 58 no less, and is now preparing to compete again in 2016. Once again, the ultimate purpose of Rich’s effort will be to build a multi-disciplinary educational program around the voyage and share it with school kids around the world via his non-profit Sites Alive Foundation.

Brian Harris, general manager at Maine Yacht Center, will be helping Rich prep the boat, just as he helped prep Great American III, ex-Solidaires, for the 2008-09 race. “This new boat makes the last one look like a Catalina 36,” notes Brian, who in the past has managed shore teams for top IMOCA competitors in Europe.

Improvements over the old boat include lighter construction, twin offset daggerboards (as opposed to one centerline daggerboard), hydraulic rams to shift the canting keel, and more water ballast. 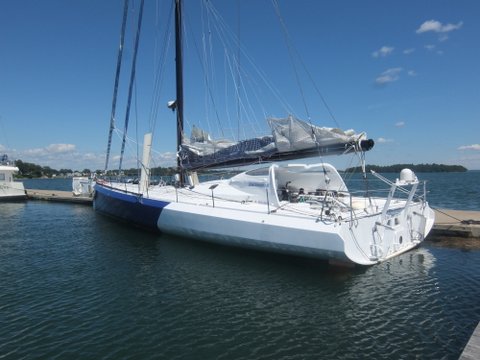 Great American IV at Maine Yacht Center on Monday. Unlike her predecessor, the new boat has a chined hull 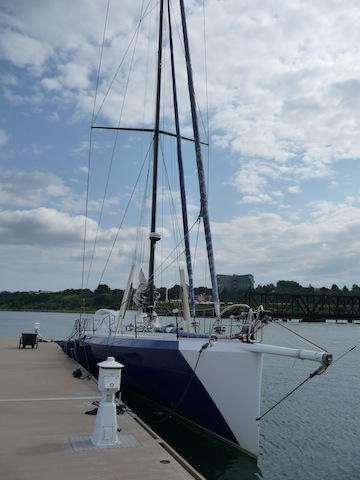 View from the front. Most of the sail inventory is recent and ready to race again 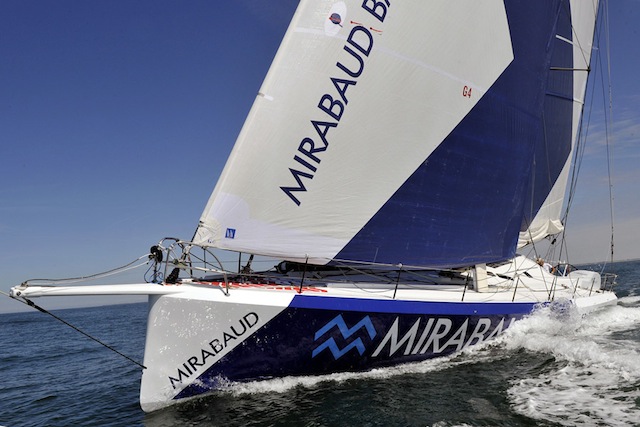 In her last iteration as Dominique Wavre’s Mirabaud. She was first launched in 2006 and her best result was 3rd place in the first double-handed Barcelona World Race in 2007-08 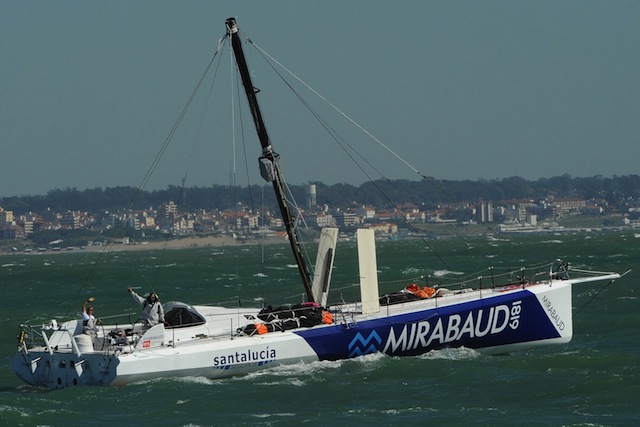 Mirabaud was dismasted in the South Atlantic in early 2011 during the Barcelona World Race and was subsequently re-rigged. During the refit the wheel steering seen here was replaced with tiller steering 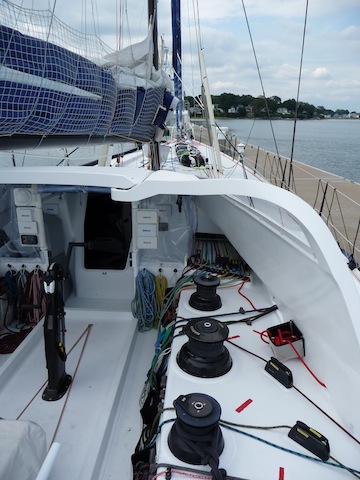 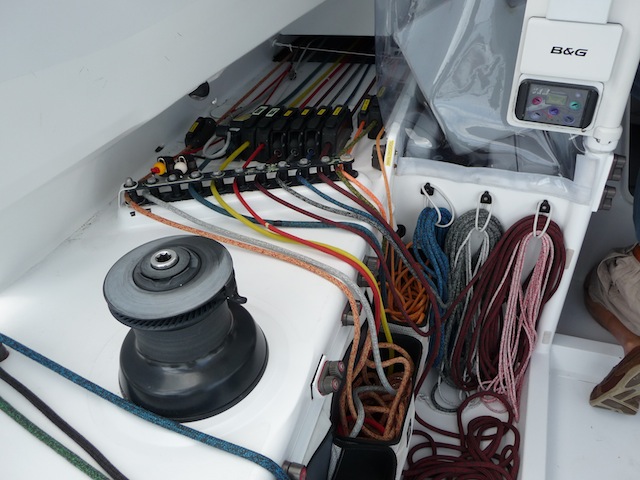 Lines led aft on the port side. Rich doesn’t expect to have to make many changes to the existing rig 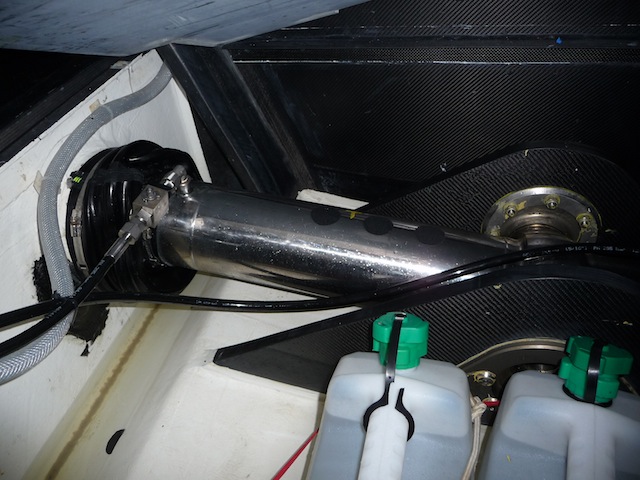 One of the two hydraulic keel rams. On his last boat Rich had to cant the keel back and forth with a simple line and tackle 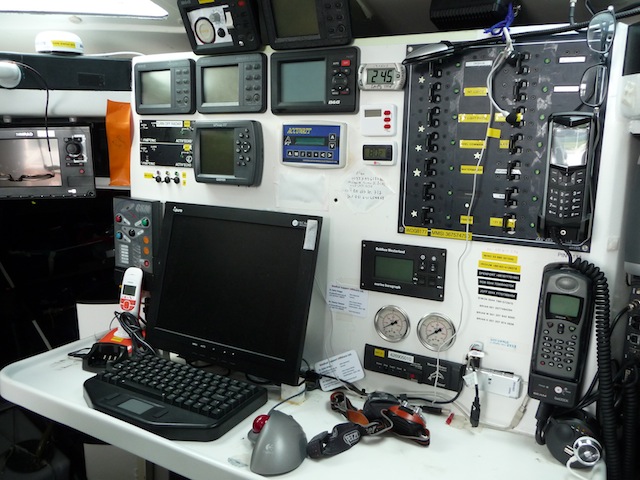 The nav station. Much of the prep work will involve simply updating the electronics. You can’t see it in this shot, but there is actually almost no headroom below, thanks to the water-ballast tanks in the bottom of the boat 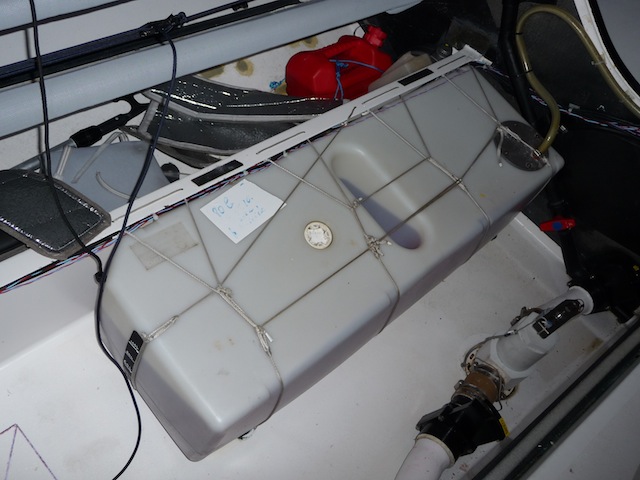 This, believe it or not, is the main fuel tank. There’s also a smaller day tank. One nice thing about mounting tanks like this is that it is easy to see how much fuel is left 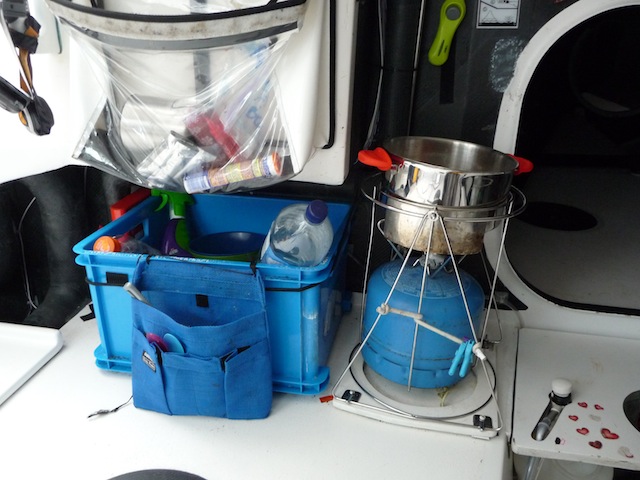 The galley… in its entirety

All in all, I have to say, the boat seems pretty much good to go. One of Rich’s goals this time is to spend less time working on the boat and more time sailing it prior to the race. He sailed her down to Marblehead on Tuesday, so keep an eye peeled for her if you’re down that way