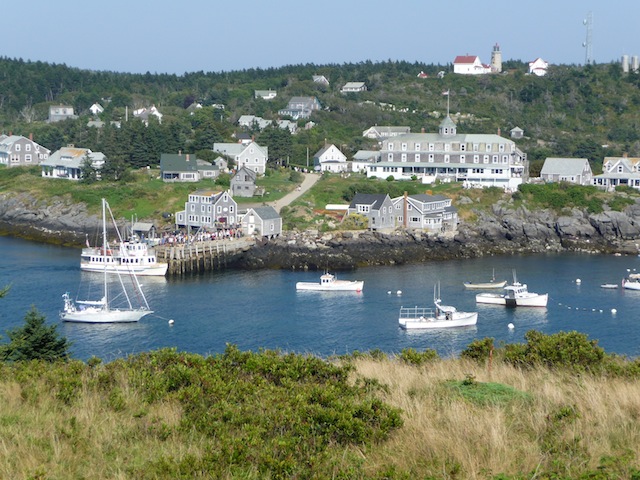 I was out on the boat with my bride last week (hence the big void in the blog) and made a point of stopping in at Monhegan Island. We were last here eight years ago–aboard my Golden Hind 31 Sophie, with infant Lucy in tow–and I seem to recall spending several hours hiking some very steep technical trails with Lucy strapped to my chest. My very first visit, way back in the 1980s, was in an open 18-foot Drascombe Lugger. I spent the night trying to sleep in the bottom of the boat, worrying about my anchor dragging as a rising southerly wind set all the boats in the harbor pitching and rocking like punching clowns.

Finding a place to park can be a big problem here, and I knew we were taking something of a chance coming in as we did this time on Lunacy–very late in the day, after a long 9-hour sail from Chebeague Island in Casco Bay. If we were shut out, the closest alternative would be the anchorage at Burnt Island, about seven miles away, and I didn’t really relish the prospect of trying to creep in there after dark, as it is usually thick with lobster pots. 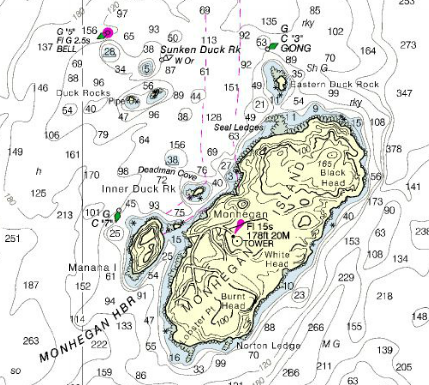 Last time in Sophie we’d found several moorings set in the deep water between Inner Duck Rock and the main island and fortunately one was vacant. This is normally where I prefer to park, as there is better protection here from seas rolling in from the south and east. This time, however, there were only two moorings there and both were taken.

I wasn’t sanguine about the prospect of finding an open spot in the south-facing main harbor, between Manana Island and the village, but as we slipped past the town wharf through Herring Gut I was surprised, and relieved, to see that several mooring balls in fact were empty. We were also relieved to have a perfectly flat calm our first night here and only a mild swell on our second night. In any sort of strong southerly weather, this place can be decidedly uncomfortable and even with a 4,000-pound block under your boat you can feel like you’re barely holding on with your fingernails. 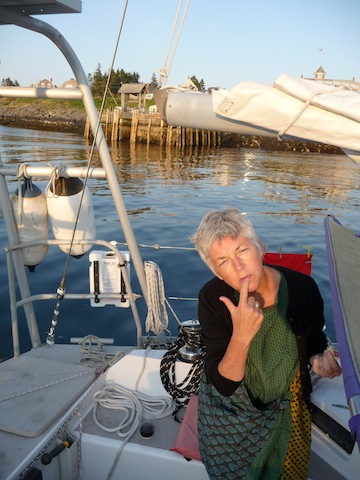 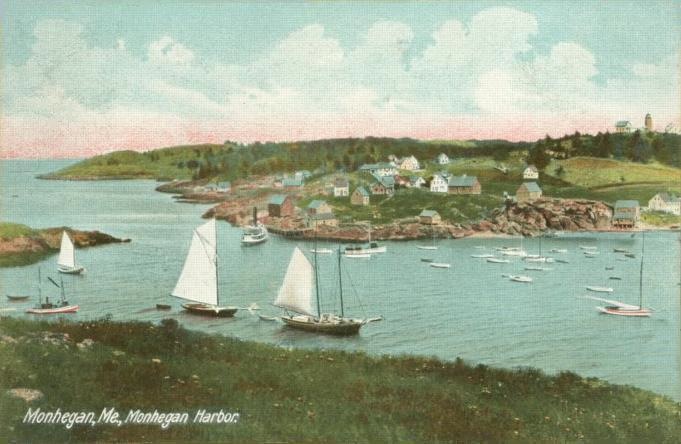 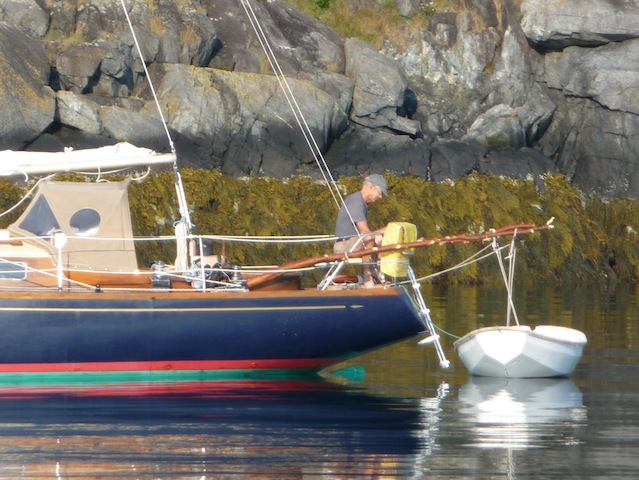 Our neighbor on the next mooring over had some stylish homemade dinghy davits hewn from tree branches. It looked like he had even varnished them to match the brightwork on his boat

As a cruising destination, Monhegan is definitely worth the anxiety. Set out on its own some 10 miles from the mainland, it is both isolated and fantastically beautiful. Fishermen have gathered here from as far back as the early 17th century, and artists have been coming since the mid-19th century. The most significant member of the latter group, for me personally, was Rockwell Kent, who lived on the island for five years starting in 1905 and worked as a well-digger while painting landscapes in his spare time. Other important artists who have worked here include Edward Hopper, George Bellows, Jamie Wyeth, and Robert Henri. 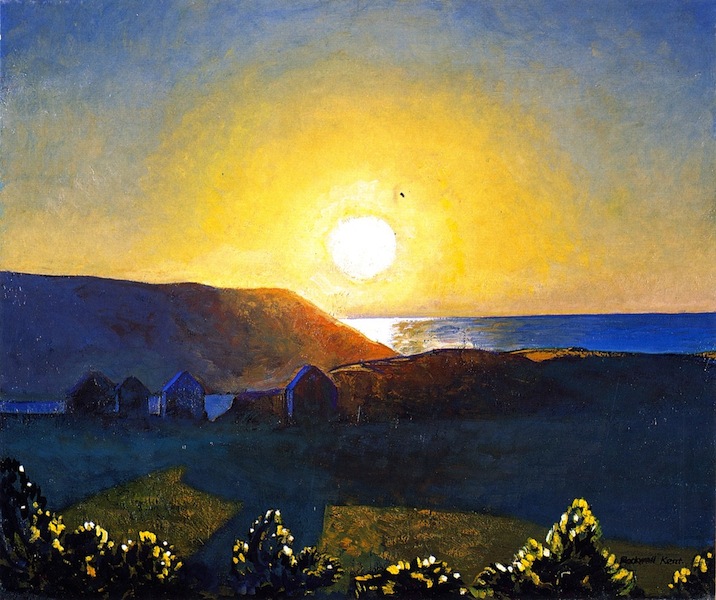 The downside to Monhegan, as with so many unique wonderful places on our planet these days, is that it is beset by tourists. In the summer there are two mail boats that come each day (Laura B and Elizabeth Ann, both from Port Clyde) bearing long-term guests who stay at the inns and small B&Bs on the island, plus there are two head boats (Balmy Days from Boothbay and Hardy III from New Harbor) that each morning bring a horde of day-trippers who swarm across the island like locusts. What with the herds of camera-toting gawkers and wanna-be artists who set up easels at every picturesque location, Monhegan in August can seem a bit like a Maine summer-island theme park. Many of the locals, I noticed, are a bit grumpy about this, and I can hardly blame them–I’m sure they feel like they are living in petting zoo. 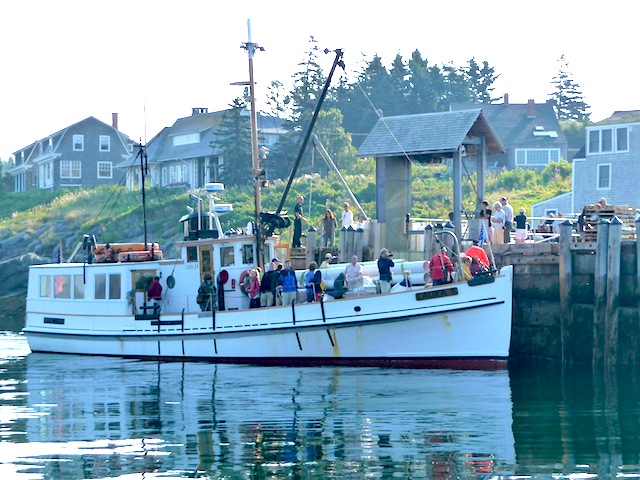 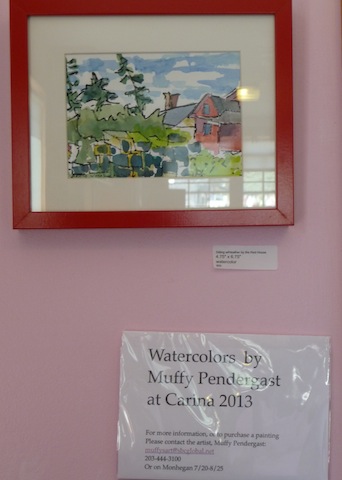 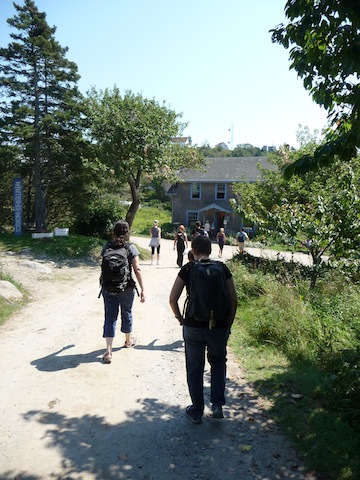 A squad of day-trippers on patrol in the village 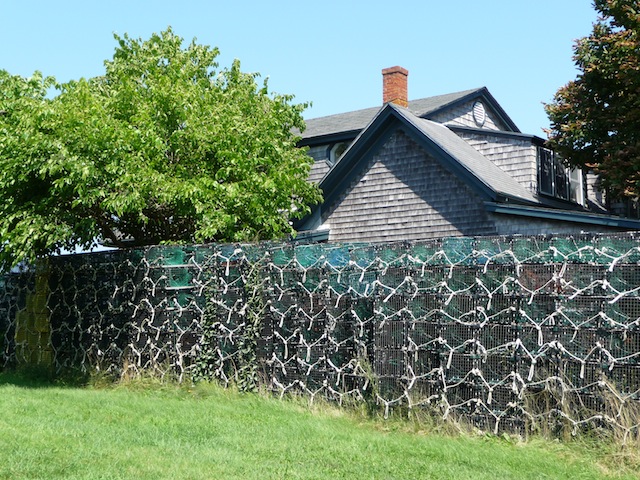 Idle lobster traps. The lobstermen on Monhegan are unique in that they limit their season and don’t fish most of the summer 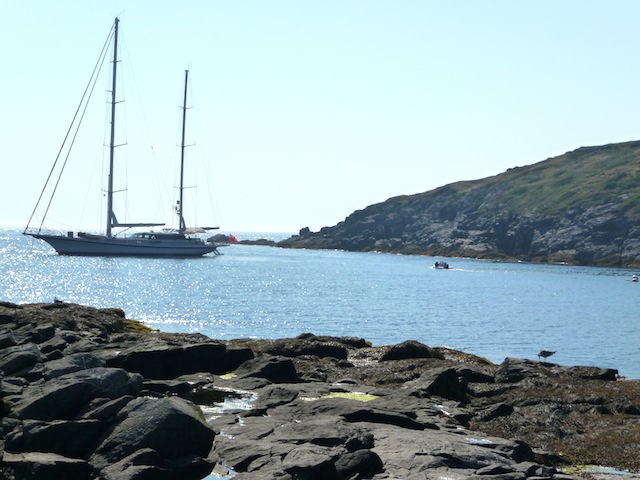 I was little surprised to a see a superyacht come in and drop anchor at the harbor entrance. But they didn’t stay and were gone by sunset

Fortunately, development on Monhegan is strictly limited and two-thirds of the island is protected by Monhegan Associates, a land trust. The small village ranged along the western shore is comprised of modest well-maintained houses, and the center of the island and all its steep cliff-wracked eastern shore is wild and has a great network of well-marked trails.

Last time we were here we hiked mostly on the east coast, which can be challenging. This time we hiked the north end of the island and most of the northwest coast. We did shoot down briefly to the south tip of the island to view the wreck of the D.T. Sheridan, a tugboat that ran up on the rocks in 1948 while towing a barge in dense fog. We also puttered over and explored Manana Island, which is populated by goats. 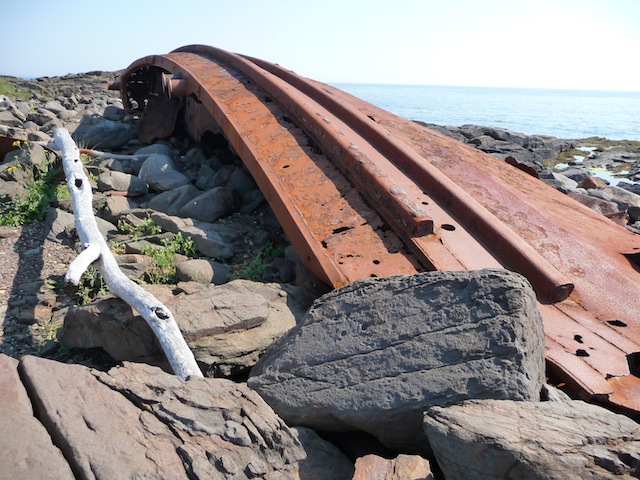 Wreck of the Sheridan, as viewed by us 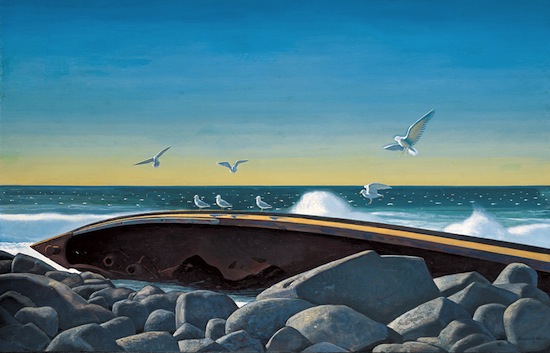 Wreck of the Sheridan, as painted by Rockwell Kent 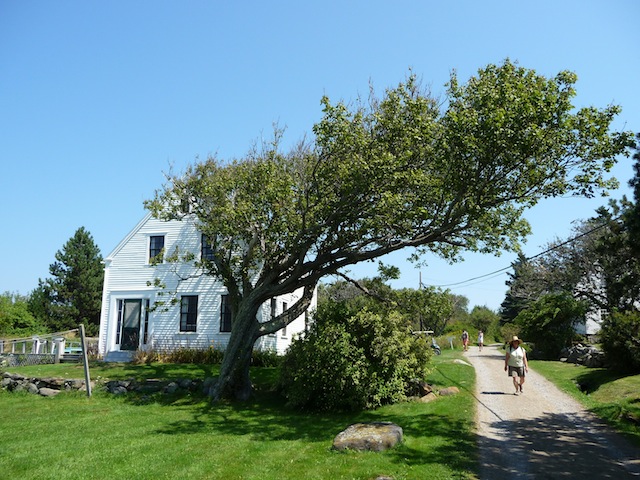 A house in the village with tree leaning east 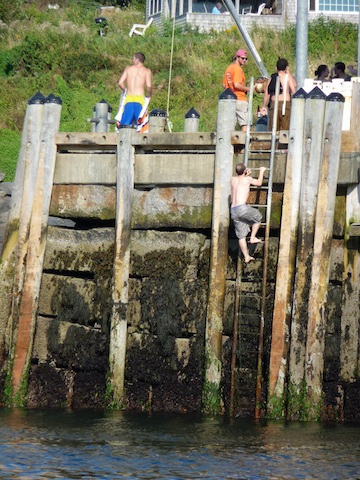 Young folk swimming off the wharf. The water everywhere in Maine has been unusually warm this year 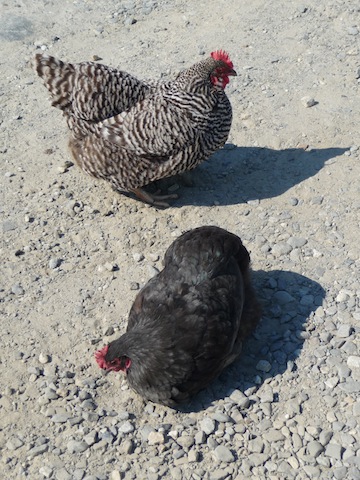 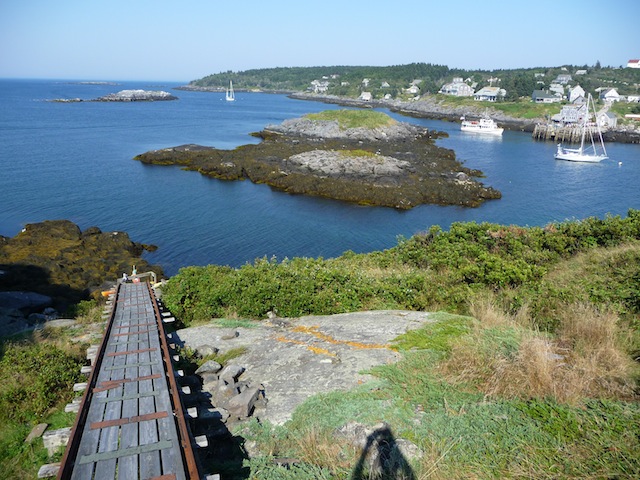 View from the ramp on Manana looking north 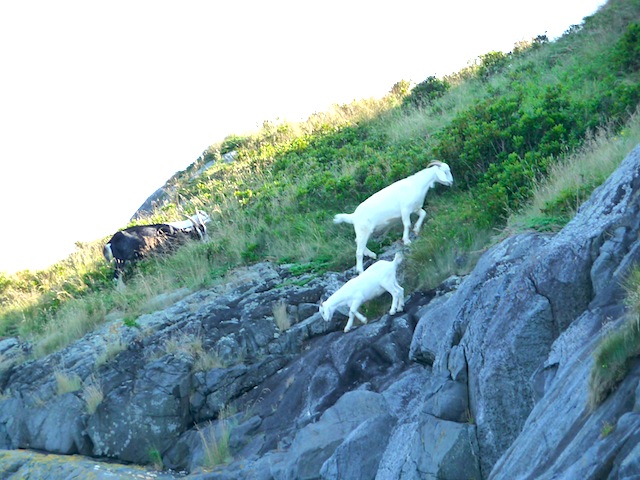 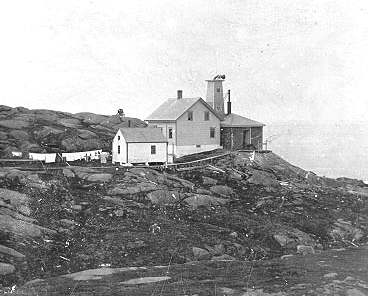 The old sound signal station on Manana, back when it was manned 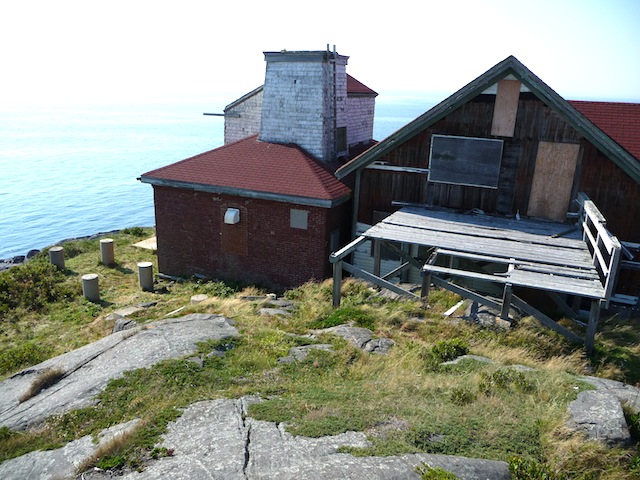 A Further Note on Parking: Bold persons might consider anchoring here, provided nothing interesting was happening weather-wise. As mentioned, I once anchored an 18-foot boat inside the harbor, but I’d be reluctant to do it in anything larger. The bottom is said to be foul, and there is little room among the moorings. According to Taft and Rindlaub’s cruising guide, it may be possible to anchor in Deadman Cove, east of Inner Duck Rock. I’ve also wondered if it might be possible to drop a hook in that 11-foot spot you see on the north coast. It’s awfully open, but might be tenable in very settled conditions.

The lobstermen, who don’t fish during the summer, seem to be keeping their harbor moorings vacant so they can charge people to use them. We paid $35 a night for our mooring to Rusty, who was collecting on behalf of Shermie, who was in the hospital in Portland with a busted leg and is in danger of losing a foot. (We wish him a successful recovery!) There is a fair amount of current running through the harbor, and on the ebb tide we ended up laying stern to the south breeze, which made for some awful transom-whacking noise and motion when the swell started rolling in.

To get ashore on Monhegan, you need to land your tender on one of the two small beaches in the harbor. Neither is ideal: the northern one is rocky and very narrow; the other southern one is wide and flat, but with a lot of broken glass mixed in with the sand. You can come alongside the wharf for a brief periods, but should not leave a boat tied up there.