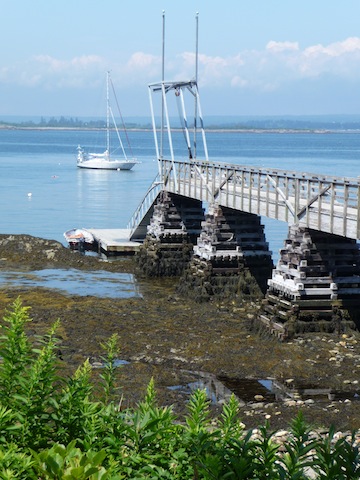 Last Wednesday, after sailing out on my own from Portland, I spent the night aboard Lunacy on a mooring at Cliff Island. I awoke the next morning to fog, thin tendrils that first filtered in from the east with the spreading sunlight then thickened and obliterated everything. Later, after it cleared off, I motored just a mile or so north to check out Eagle Island while waiting for the breeze to fill in. This 16-acre preserve, formerly the summer home of Rear Admiral Robert Peary, reputedly the first man ever to reach the North Pole, is now a state park and is open to visitors seven days a week from June 15 to Labor Day each year. There is a prominent dock where you can land a dinghy at the island’s northwest corner and a collection of moorings that are available for day use. 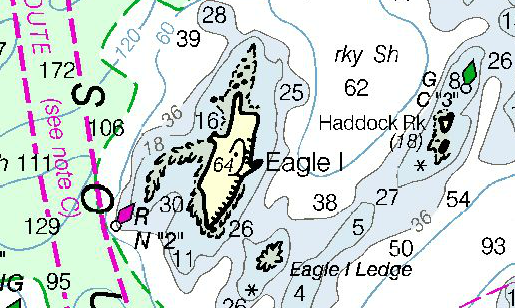 Peary was born in Pennsylvania, but was raised in Maine, where his family hailed from originally. He first discovered the island during camping trips he made while in high school and purchased it a few years after he graduated from Bowdoin College in Brunswick in 1877.

Peary was a rabidly ambitious man, very determined to make his mark on the world, and worked variously as a civil engineer, surveyor, and taxidermist before falling into the Arctic exploration game. His wife Josephine accompanied him on two different expeditions to Greenland and gave birth to their first child, Marie, known as “the Snow Baby,” on the second of these. On her third trip to the Arctic, Josephine was shipwrecked while traveling north to join her husband and wintered over with Marie in Greenland. During this time she encountered her husband’s other “wife,” a teenage Inuit girl named Allakasingwah, who was pregnant with his child at the time.

An awkward moment, no doubt. Josephine’s devotion to her husband somehow survived this insult, and they built a summer house on Eagle Island in 1904. Josephine, an avid gardener who did much planting on the island, was staying here with Marie and Robert, Jr., in September 1909 when news came that her husband had succeeded in reaching the pole earlier that spring.

On a lovely autumn day, nothing out of the ordinary until the afternoon, two boats were seen coming from South Harpswell toward the island. The first one tied up to the mooring and a man tumbled into a skiff, came ashore, and rushed up to the house waving a telegram. It was the Associated Press saying that Peary had reached the North Pole. Mother was not too excited because she had had too many false alarms before. By this time the second boat had dropped anchor, and the short stout figure of Mr. Palmer, the storekeeper and postmaster of South Harpswell, came puffing up the lawn. This time he brought a telegram from Peary himself to his wife saying, “Have made it at last.” Soon other representatives of the press arrived and were clustered around. One said, “What do you have to say now, Mrs. Peary?” She said, “I say come on boys, let’s have a drink.”

After Peary retired in 1911, the family spent much of each year together on the island and wintered in Washington D.C. Peary died in 1920, and the family kept using the island until 1955, when Josephine died, and subsequently Marie  donated it to the state of Maine.

What struck me about the house was how similar it was to the sorts of places I spent time in while summering in Maine during the 1960s and ’70s. A bit grander, with all its stone work on the outside, but otherwise appointed in a similar manner. The summer home McMansions you see on the coast these days are by comparison much larger and more pretentious. 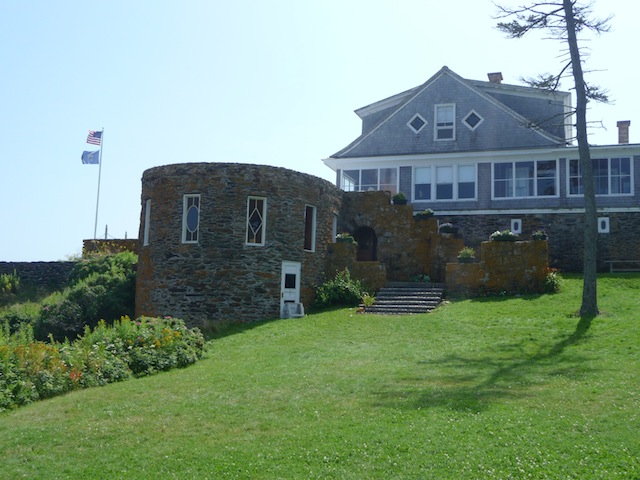 The house as seen from the dock. The round stone turret to the left houses the admiral’s library 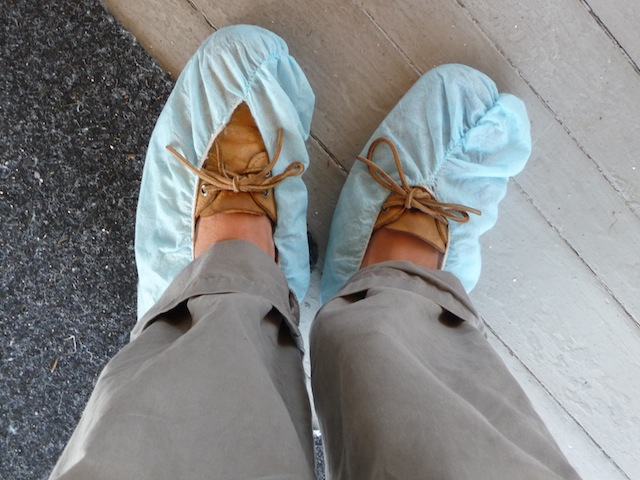 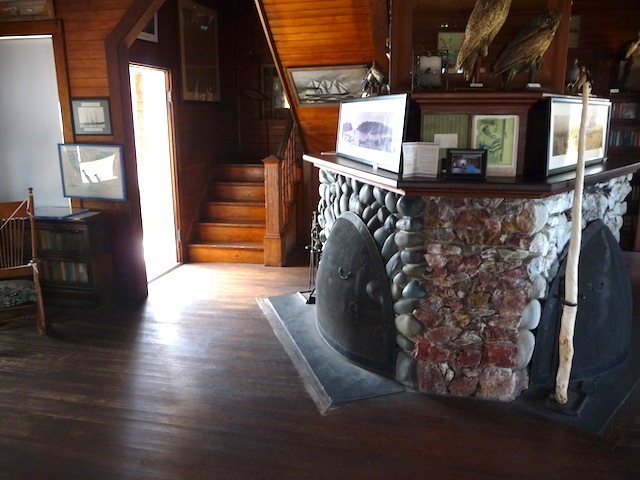 The living room. The three-sided fireplace is very impressive. Apparently, fires were never lit in the side facing the back (not visible in this photo), for fear the nearby wall would ignite 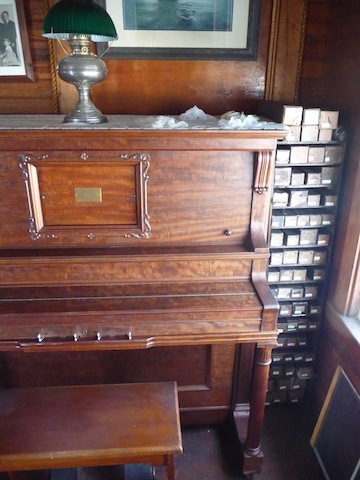 Player piano in the living room, with boxes of player rolls stacked to the right. This rig accompanied Peary on some of his voyages north and was built with its keyboard one octave short so it could fit aboard a ship 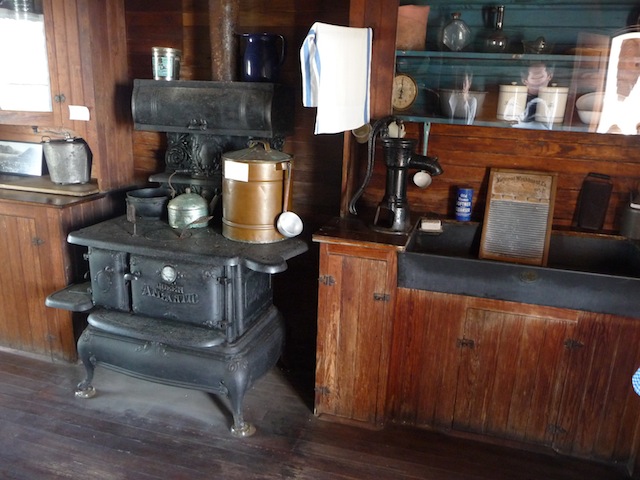 The kitchen. My grandmother had the same Queen Atlantic coal stove in her kitchen. I have fond memories of hauling buckets of coal up from her cellar to fuel it 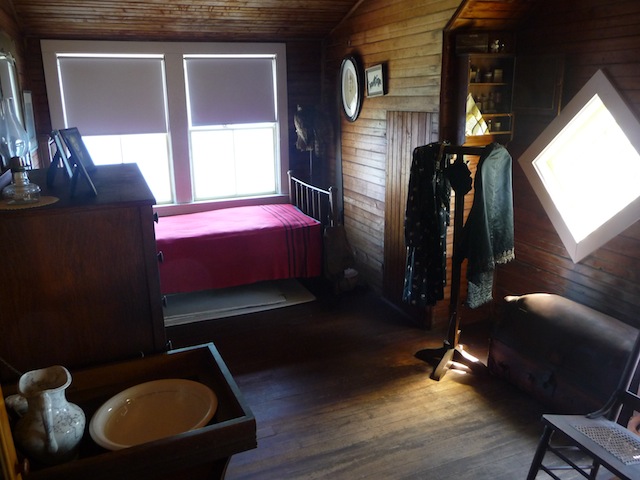 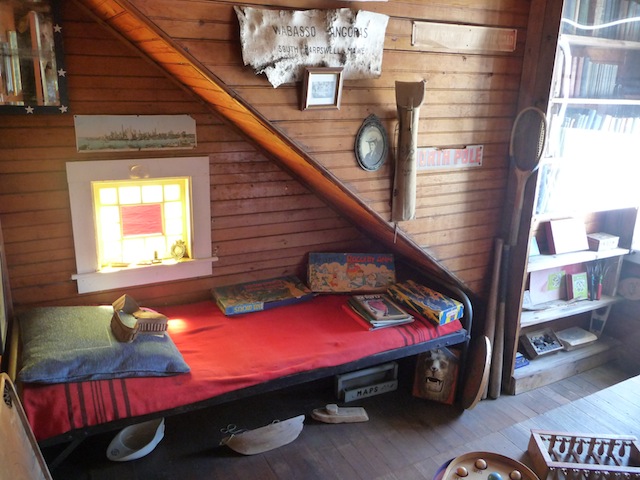 Another upstairs bedroom, for children. This, actually, is pretty palatial compared to the quarters where my brothers and I were housed 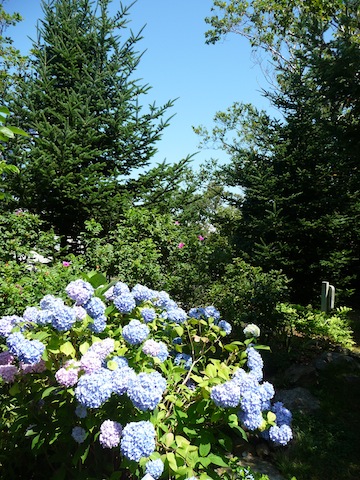 The gardens planted by Josephine are still maintained by the state 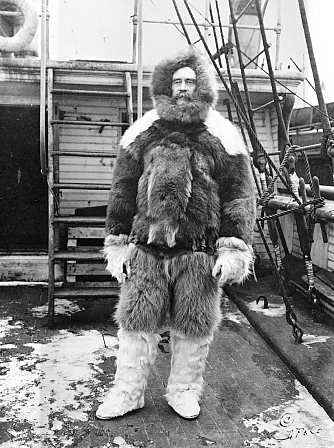 Robert Peary, Sr., in Arctic exploration garb. The existence of his Inuit son, Kali, was not generally acknowledged until the 1960s, though rumors had circulated previously 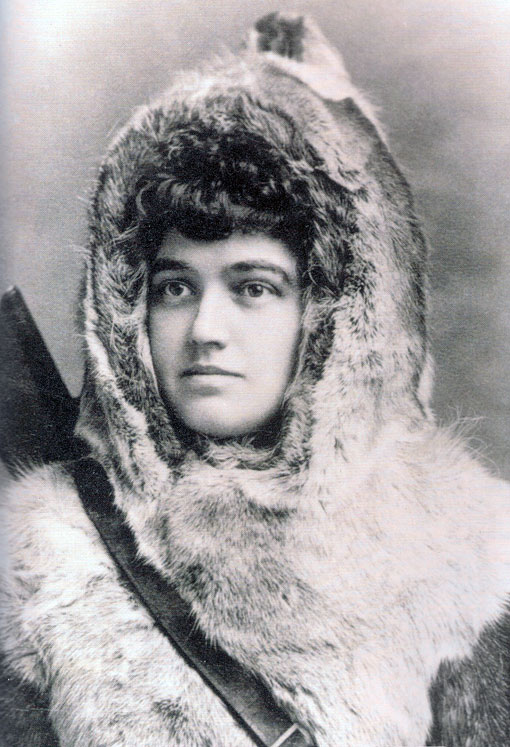 IN OTHER NEWS: One of the boat chores I attended to while on this outing was figuring out what year my Andersen primary winches were manufactured. The black plastic lids (called “disc springs” by Andersen) are breaking into pieces and need replacing. 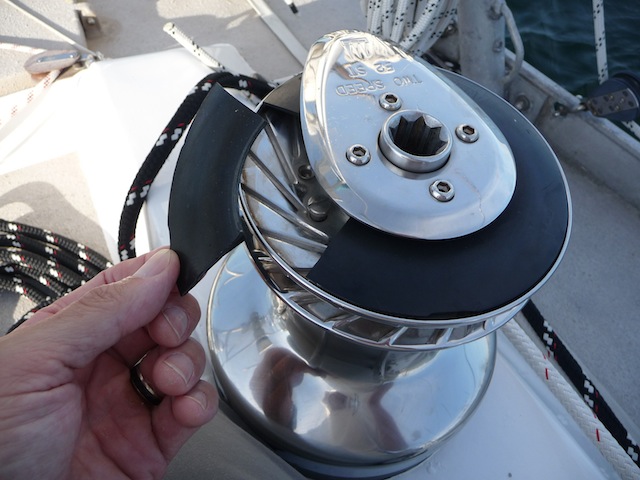 The problem, in a nutshell 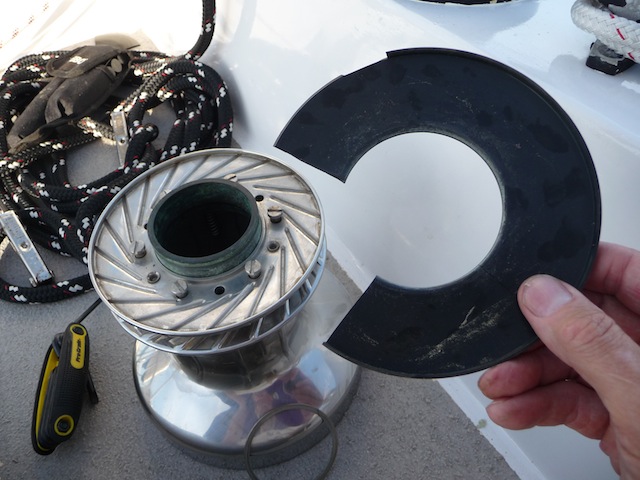 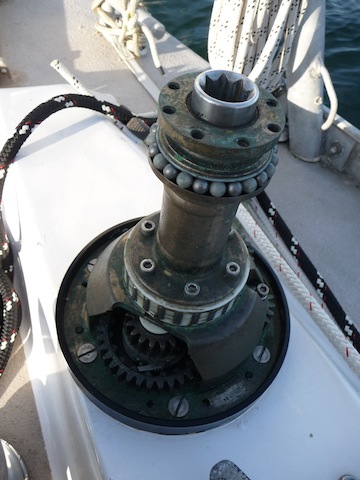 The main body of the winch, with the drum off 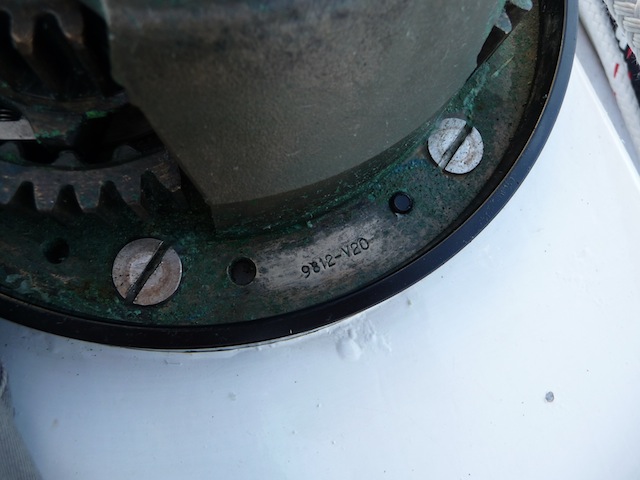 The information I need, inscribed on the winch base. This number tells me my Andersen 52ST winch was manufactured in December 1998 and is version 2.0 of the product. To read it I had to do a bit of polishing. Armed with this knowledge, I was able to order the simple plastic part, which costs $34

PS: To explain my use of the word “reputedly” in the first graph above in reference to Peary being the first to reach the North Pole. Soon after he returned from the pole, Peary learned that Dr. Frederick Cook had just announced that he had reached the pole one year earlier. (Cook, coincidentally, had served on Peary’s first voyage north and had set Peary’s broken leg after it was crushed by a ship’s tiller in an accident at sea.) Much controversy and debate ensued. Peary ultimately prevailed, but there is still some doubt as to his accomplishment. Scholars today tend to discredit Cook’s claim altogether and believe that Peary might have been within five miles of the pole.