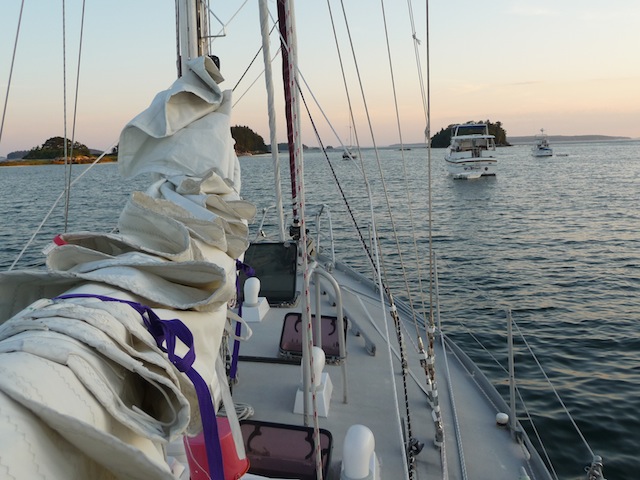 I went out on Lunacy on my own on Monday afternoon and sailed up to Lower Goose Island, just across Middle Bay from Harpswell Neck. There’s a cozy-looking anchorage here, just north of two ancillary islets called the Goslings, that I’ve spied from a distance but have never actually visited before. According to my copy of Taft and Rindlaub’s Cruising Guide to the Maine Coast, this spot is popular on weekends, but empty during the week, so I was looking forward to some solitude. But no. By the time I got there, it was already filled with boats with out-of-state plates–Florida, Massachusetts, Maryland, Rhode Island, New Jersey–a good mix of sail and power.

The sail up from Portland was an exercise in patience. Once again my big-ass screecher was worth much more than its weight in Mylar and carbon filament. Except for a total of 10 minutes spent motoring to get me through two small null spots, I let the wind, which varied in strength from 0-9 knots, and in direction through a full 360 degrees, drag me most of the 13 miles up there. 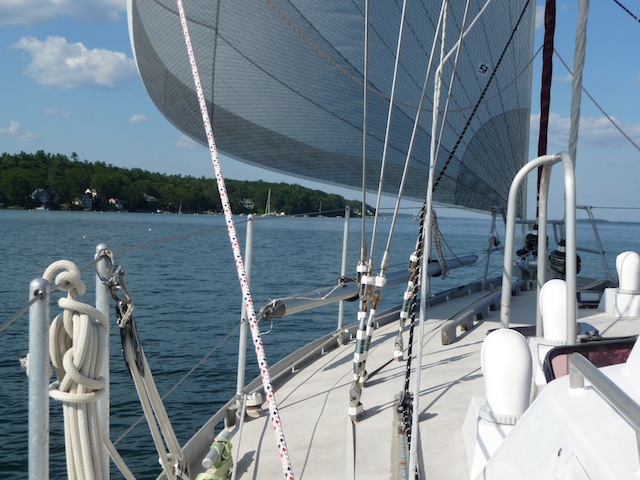 I call this an anchorage, but really it’s a mooring field, which is a shame. There is a bit of room to anchor here if you have to, or want to, and the holding is reportedly very good, but this evening there were more than enough moorings to go around. The last of the faint sea breeze shoveling up from the south through the long corridors of Middle Bay and Broad Sound were a blessed relief after the enervating heat of the day, and the view in that direction, littered with the pine-studded silhouettes of myriad islands bathed in sunset hues, seemed entirely miraculous. 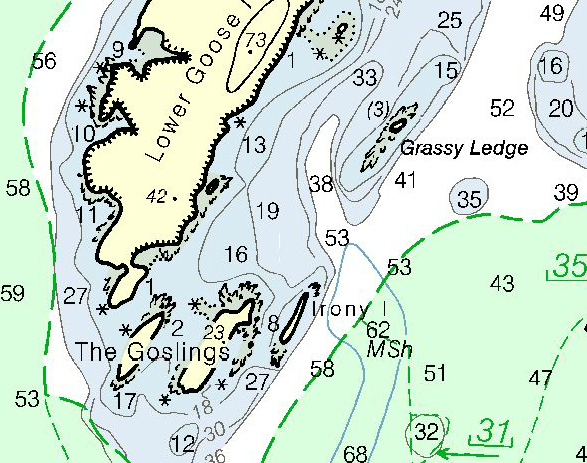 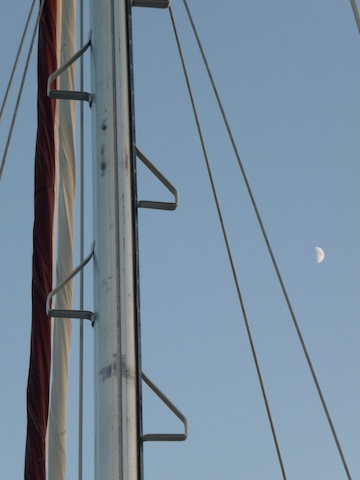 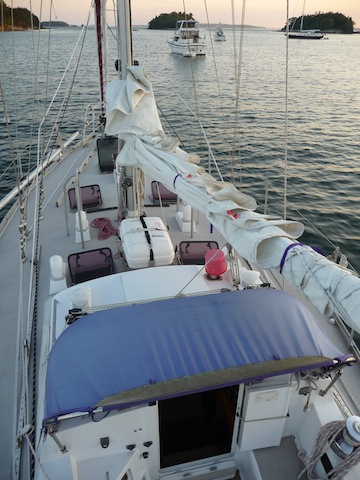 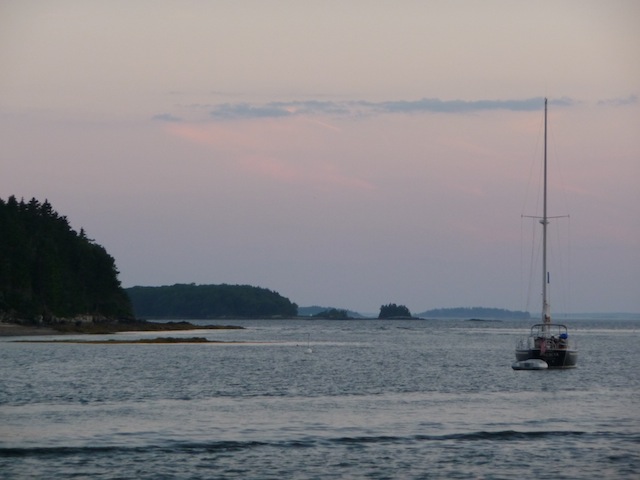 Early the next morning–which came airless and, yes, hot–my uncle David Etnier (well, my half-uncle, actually) zipped over from South Freeport in a skiff to pay a visit. Formerly in state government, he’s working now as a yacht broker, so we spent most of our hour together chatting about boats. If you’re looking to buy or sell a boat anywhere from Portsmouth to Camden, I recommend you check him out. An ex-lobsterman, among other things, he handles commercial and recreational vessels, both power and sail, is a licensed skipper, and can also do deliveries if necessary. He knows his stuff, is very service-oriented, and is definitely not a hard-sell kind of guy.

Afterwards I went ashore on my own to explore the Goslings. These are privately owned, but the owners permit public visits, and the Maine Island Trail Association helps administer usage. According to their current guidebook (a great resource, by the way, which I always use in conjunction with my Taft and Rindlaub), camping is restricted to certain areas and no smoking, no fires, and no pets are allowed.

The beach at the north end of the eastern Gosling, I was amazed to see, is composed almost entirely of empty periwinkle and snail shells, literally millions of them. Meanwhile, the so-called “sandbar” between the two islets, which is exposed at low tide, isn’t sand at all, but consists entirely of clam shells, mostly broken, but many still whole, and bleached white by the sun. Because they are so small, it takes little time to explore the interiors of the islets, so I spent much of my time here trudging through the shallows behind the bar peering at the many little crabs that were scuttling about trying to find smaller crabs to eat.

At least I think that’s what they were doing. When finally I did see one crab catch another smaller one, it dawned on me they might be having sex instead of fighting to death. With many species it can be hard to tell the difference. 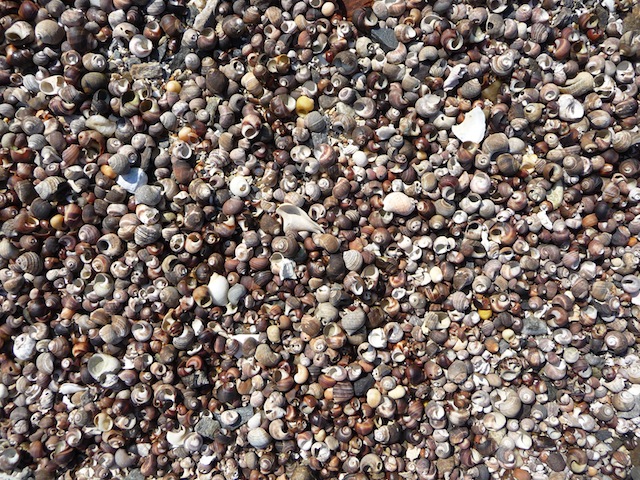 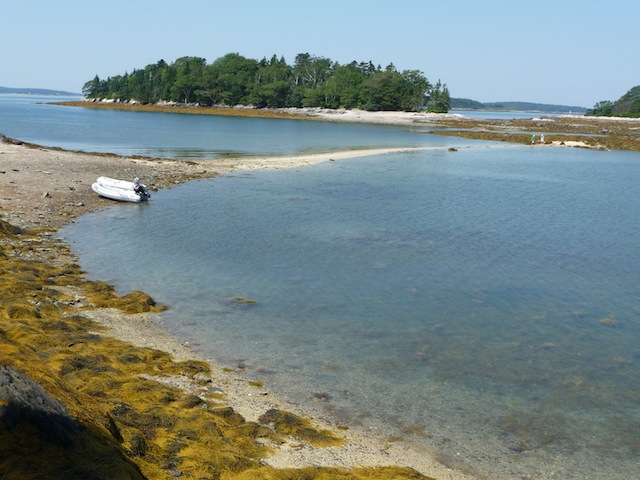 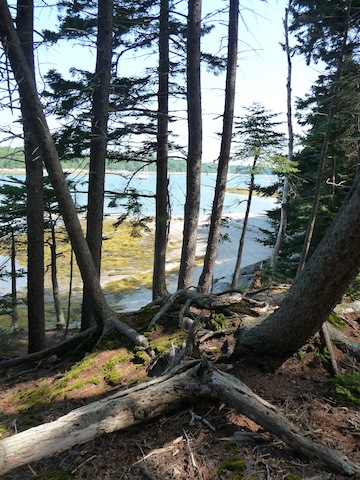 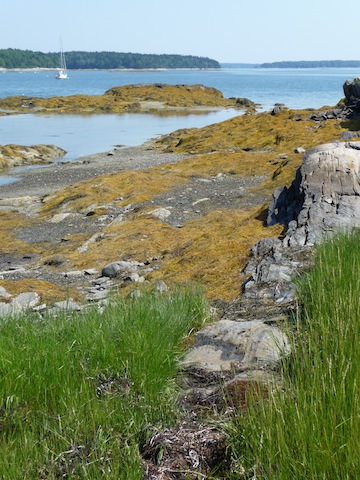 Before leaving I ran the dinghy a short distance north, along the whole length of Lower Goose Island, which is off-limits to visitors and has several modest vacation homes lurking along its shore, to Upper Goose Island. According to Taft and Rindlaub, most of this island belongs to the Nature Conservancy and the public is welcome ashore. This was once the largest great blue heron rookery in New England, with over 250 nests, but most of the herons have since moved away. It is recommended you not wander too far inland between early April to mid-August so as not to disturb the nesting herons that remain. 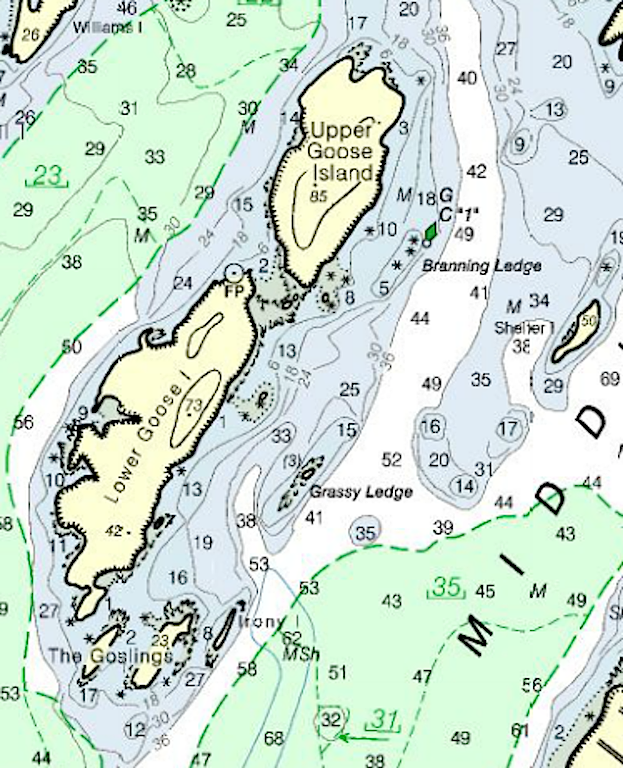 I didn’t get ashore in any event, as I found no place convenient to land on the island’s southeast corner and I didn’t want to go all the way around to the recommended landing spot on the western shore. I did note there is at least one house here on the island’s southwest corner. 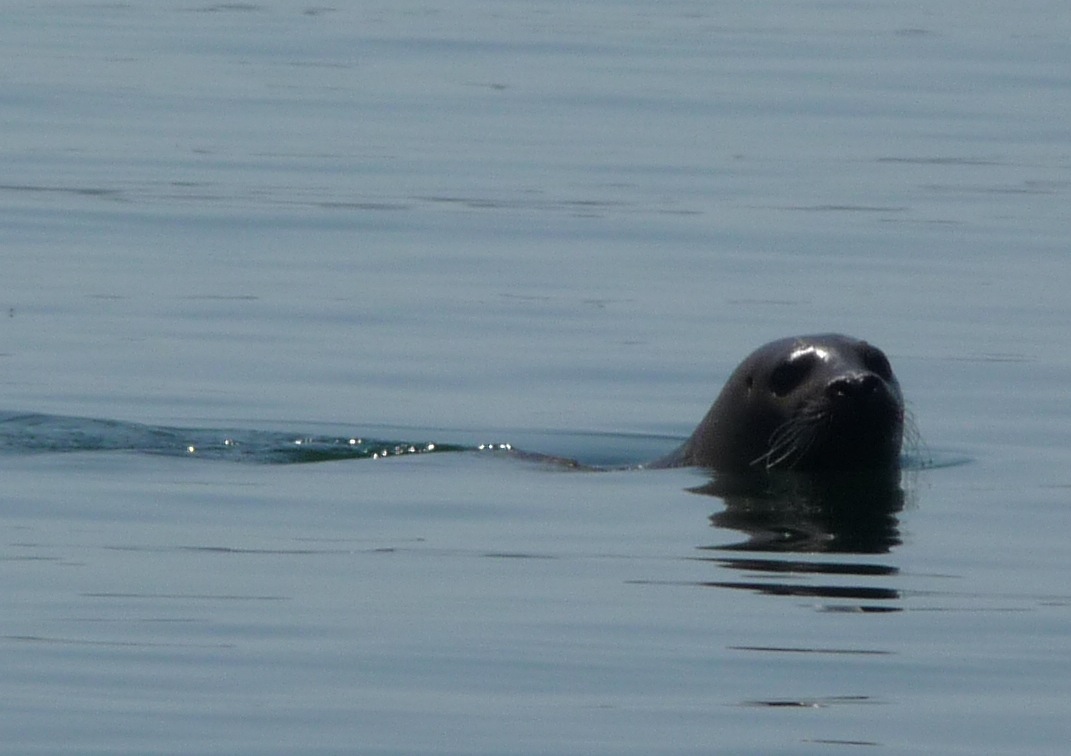 On my way back to Lunacy I carefully approached Grassy Ledge, which marks the northeast boundary of the anchorage/mooring field and was carpeted with sunbathing seals. They were quite shy, however, and all slithered into the water before I got very close. As I rowed quietly the rest of the way back to the boat, they followed me, dozens of them, and kept a close eye on me until I was out of the dinghy.

The sail home never happened. As in the sea breeze never appeared–at all–which is something I’ve noticed this year. When it does fill in, it is weak (as on Monday afternoon), and some days it never fills in at all. It’s as if the air over the water is just as warm as the air over the land, so none of it needs to go anywhere.

It was a hot, bothersome chore motoring all the way back to Portland, as I had to stay on my feet the whole time to look out for and dodge the many lobster pots. Really the only nice part was when it rained on me for half an hour or so. The shade from the rain clouds and the cool moisture were very welcome.