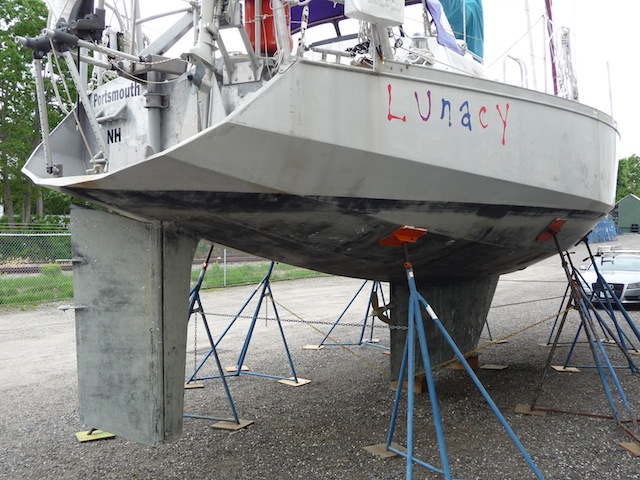 Lunacy got hauled out at Maine Yacht Center soon after we arrived there from Bermuda last week, and yesterday I went up to have a look at her. As you can see in the photo up top, there’s very little bottom paint left on her nether parts. She’s been mostly bald like this for most of the winter. Since taking her down to Puerto Rico last November, it’s been a battle keeping the growth off and she’s had her bottom scrubbed five times–three times by me and twice by divers. Besides being too soft to stay on the boat for a full year, or after a few scrubs, the ablative copper-free Ultima Eco paint I had on didn’t seem to be an effective deterrent to life in tropics.

So I was wrestling with the big question: do I finally abandon my quest for an effective copper-free paint? Is it time to resort to the “nuclear option”??? The MYC service manager Jeff Stack and I discussed what would be involved, i.e., lathering on more barrier coating in hopes of keeping a hard, or semi-hard, copper paint separated from Lunacy‘s vulnerable aluminum self.

Troll the Internet for opinions on this subject and you’ll find a perfect ying-yang of truth and certainty. There are those who are perfectly certain that putting any copper paint on an aluminum boat is suicidal, no matter how much barrier coat you have between paint and hull. And there are those who are certain this is no problem at all, provided the barrier coat is intact. I have in fact never heard of an aluminum hull being eaten by paint–all the horrible corrosion stories you hear are of boats being eaten inside-out, due to junk in their bilges. So the nuclear option, at last, was seeming pretty tempting. 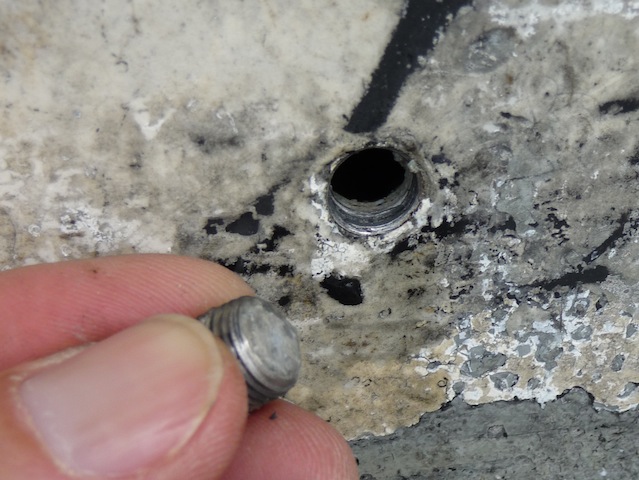 Paint, however, turned out to be the least of my worries. On pulling the plug at the bottom of Lunacy‘s rudder skeg, I was mortified when I saw water pouring out–about a pint’s worth–which means, most probably, that the weld at the top of the skeg once again has a crack in it somewhere.

Loyal WaveTrain riders will recall we had this same problem four years ago, soon after we suffered through the ordeal of the sponge blast. 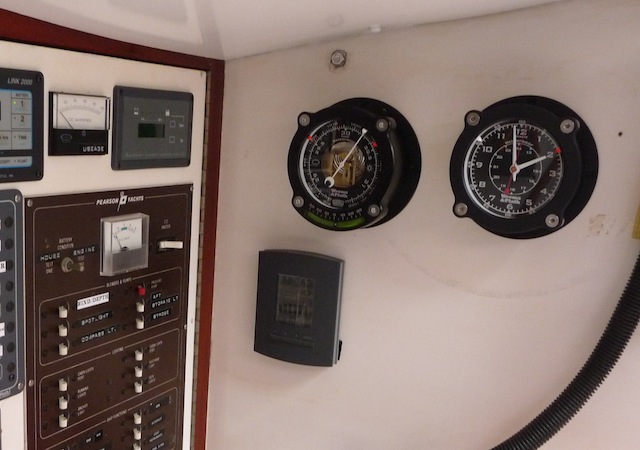 To assuage my disappointment re the rudder skeg, I treated myself to the fun job of installing the new barometer and clock I bought at the Miami show in February. They look pretty sharp, don’t you think?

I also spent a little time roaming the MYC shed, where I found: 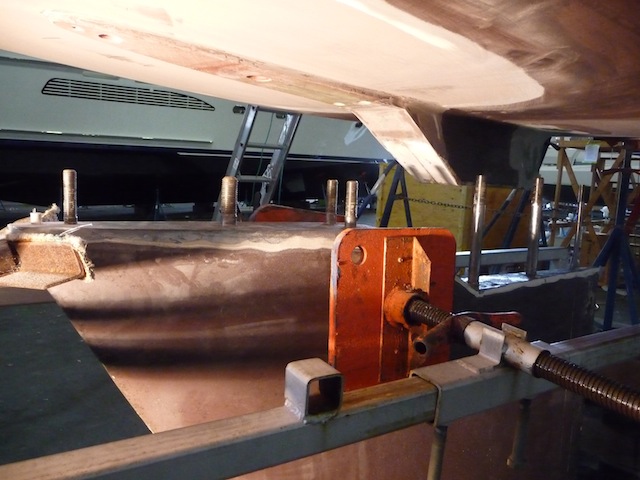 My buddy Phil Cavanaugh’s boat Alida undergoing extensive keel surgery, this as a result of him parking her on a rock for a few hours last summer. 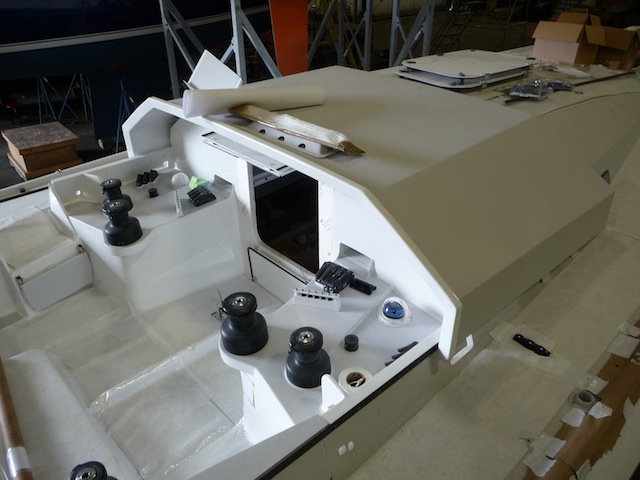 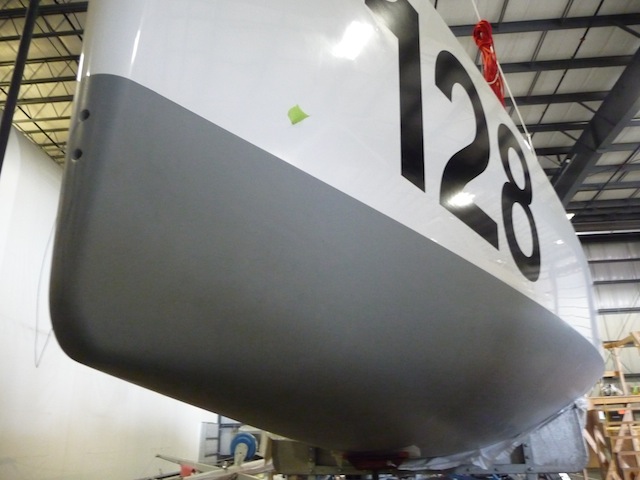 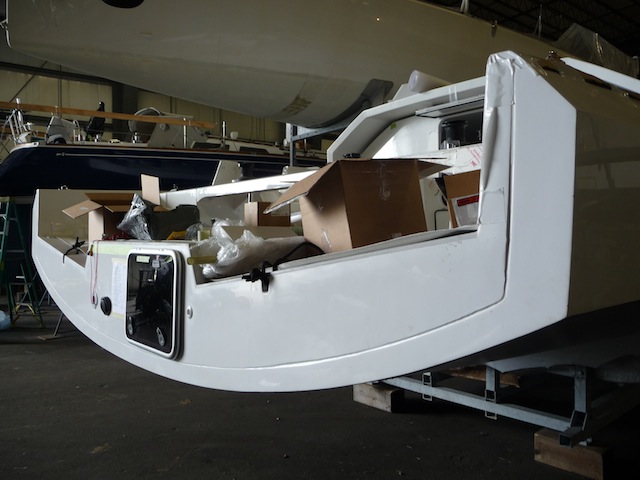 There are also two new third-generation Akalaria Class 40s in the house getting prepped for their owners. Features include a retractable hard dodger that slides back and forth over the cockpit and a very serious hard chine that runs most of the hull’s length from bow to stern. 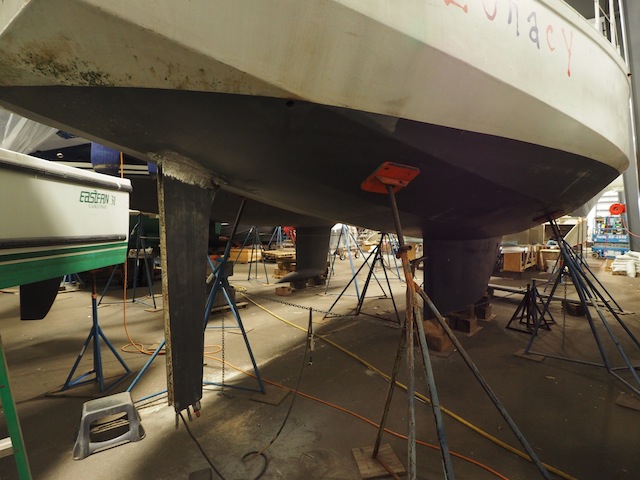 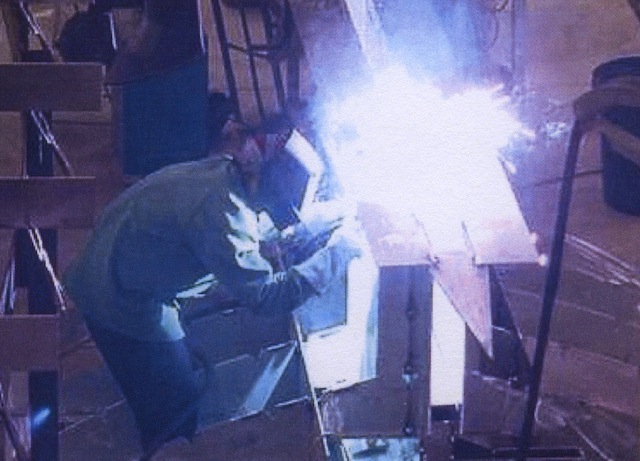