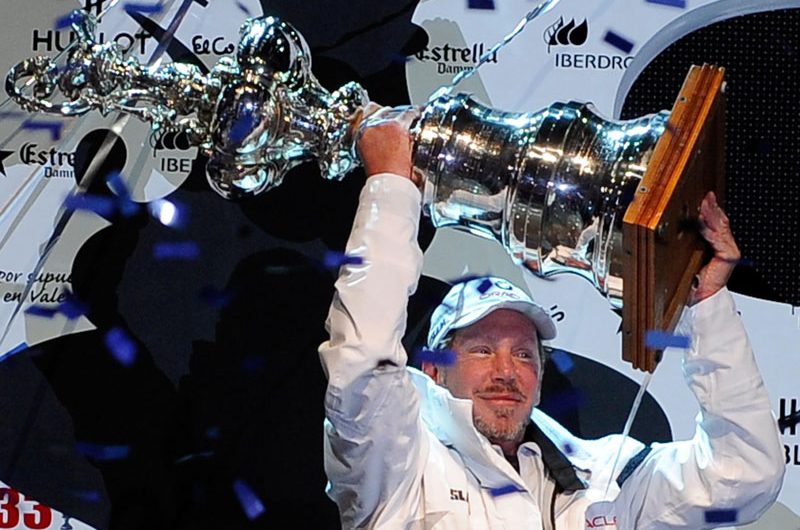 Another America’s Cup summer looms on the horizon, raising again that perennial insuperable question that so tortures racing sailors: how the heck do we get laypeople interested in our sport? These days the default answer is super-fast boats and TV-friendly race formats, which certainly are attractive to sailors, even slowpoke cruisers like myself. But this sort of excitement, I fear, flies over the heads of most people who are not inherently interested in sailing. A much more successful formula is to focus instead on personalities. Look back at those moments in America’s Cup history that have truly bubbled up into the mass consciousness, and you’ll note they have all revolved around interesting people–Dennis Conner fighting to redeem himself after losing the Cup in 1983; Ted Turner talking trash back in the 1970s; Sir Thomas Lipton playing the lovable loser throughout the early 20th century.

Sailors may have trouble comprehending this, but writers certainly don’t. Which, I assume, is why Julian Guthrie, in her soon-to-be-released book on the most recent history of the Auld Mug, The Billionaire And The Mechanic, tries her darnedest to make a hero out of Larry Ellison. It says something of her ability as a writer that she almost succeeds in doing so.

As the book’s title suggests, Guthrie does try to hedge her bet. Co-starring as protagonist is Norbert Bajurin, who runs an auto radiator repair business and is commodore of the Golden Gate Yacht Club, which has served as Ellison’s “front” club in his long campaign to win and retain the Cup.

According to the book’s subtitle, Bajurin and Ellison in fact “teamed up” to win the Cup, but this is true only in a very literal sense. We’re led to believe the two have developed some sort of meaningful bond, but by the end of the book we realize this is not the case. It is, as we suspected all along, merely an amicable marriage of convenience, and the only surprising fact I learned about Ellison’s relationship with Bajurin and GGYC is that Ellison hasn’t been as big a sugar-daddy for the club as I assumed. Evidently, the only financial largesse he has bestowed is to require all members of Oracle Racing to also become dues-paying members of GGYC.

Of course, the best America’s Cup human-interest story we’ve seen in recent years was what went down last time. The titanic no-holds-barred battle between Ellison and Ernesto Bertarelli, played out in courtrooms, in yacht design offices, and–in the end, finally–on the water, should have piqued the general public’s interest much more than it did. The problem was neither of the principal actors were sympathetic, nor very interesting. It would have helped if one, at least, was a bit bombastic and over-the-top, a la Ted Turner or even Donald Trump, but instead they play into more commonplace stereotypes. Bertarelli was born a spoiled rich guy; Ellison is a cold, ruthless self-made man. The general public knows who they are because they are very rich, but there are other rich people doing much more interesting, more scandalous things, as a quick perusal of any given issue of Vanity Fair will attest.

I was genuinely surprised, and disappointed, that Guthrie in her book doesn’t do more with the Bertarelli-Ellison rivalry. I was looking forward to getting a lot more behind-the-scenes detail on the 33rd Cup campaign, which I personally always found fascinating. Instead I learned a lot more than I wanted to know about Ellison’s personal development as a round-the-buoys sailor. The book starts in the right place, showing us how Ellison got interested in the America’s Cup only after he got the pants scared off him in 1998 Sydney-Hobart Race. But by the time I got to what turns out to be the dramatic heart of the story–Ellison’s victory (closely supervised by Russell Coutts) in the 2008 Cagliari Cup match-racing competition over the likes of Ben Ainslie and Jimmy Spithill–I was almost gagging. 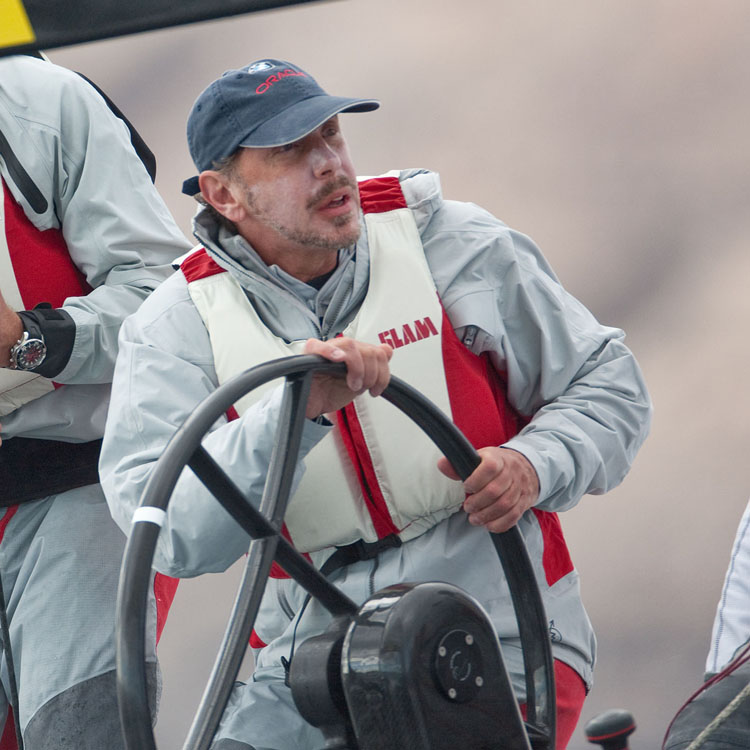 At this point I had to ask myself: did Ellison actually commission the writing of this book? I googled the author and found this was unlikely. Guthrie is in fact a legitimate journalist and author, though she does seem to have a proclivity for sucking up to rich people. She is also very good at what she does. I genuinely got pulled into this book, in spite of my resistance, and read it to the end very willingly, not because I felt I had to. Guthrie does a good job of making Norbert Bajurin seem as interesting as he can be, and her portrait of Ellison, though laudatory in many places, is ultimately honest. You don’t need to read too hard between the lines to see the man unvarnished–fundamentally insecure, lonely, competitive, extremely competent, and very determined.

I do sincerely hope this book does what it sets out to do, which is pique the public interest in Larry Ellison and the America’s Cup well enough that people take more interest in this summer’s competition than they normally would. Guthrie has a very good grasp of the mechanics of sailing and succeeds, I think, in making our sport both comprehensible and exciting to laypeople. Really the only technical error I found is that she repeatedly, and inaccurately, describes the 1998 Hobart storm as a “hurricane.”

Sailors, in any event, especially those who follow the Cup, will undoubtedly find the book interesting. Larry Ellison may not be a hero exactly, but we are indebted to him. Not only did he save the America’s Cup from Bertarelli’s misguided attempt to monopolize it, but, as this book demonstrates, he has shown us a viable way forward, at least in one respect.

There’s no getting around the fact that Cup competition is again, as it normally has been, dominated by very rich people. What’s different now is that some players are no longer willing to sublimate themselves and their ambition to the governance of yacht clubs, as is required by the Deed of Gift that governs the Cup. Bertarelli showed us the dark side of this reality when he tried to hijack the Cup by controlling the clubs on both sides of the competition. Ellison’s relationship with GGYC, by comparison, is much more wholesome. As the book makes clear, his adopting this blue-collar club saved it from the verge of collapse, and aside from borrowing some club stationary for certain bits of correspondence and hosting some bang-up parties, he has left it to its own devices. The sport of sailing would certainly benefit if more struggling clubs had such benefactors. 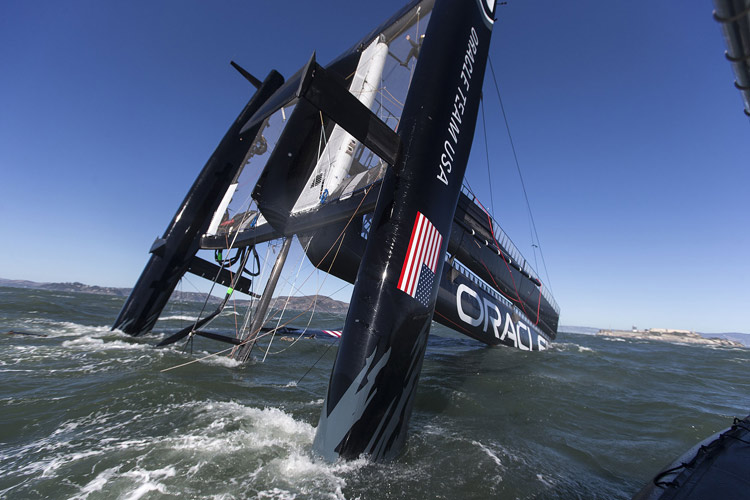 A larger question, of course, which Guthrie does not touch upon, is whether racing in these enormous hard-winged foiling catamarans that Ellison and Coutts have concocted is good for the Cup. I hope we will be treated this summer to a glorious spectacle of exciting one-of-a-kind racing. But I won’t be surprised in the least if we are instead tortured with a litany of exotic boat failures and aborted competition. Either way, the America’s Cup is sure to remain what it always has been–the world’s weirdest and least predictable sporting event.

The Billionaire and the Mechanic: How Larry Ellison and a Car Mechanic Teamed Up to Win Sailing’s Greatest Race, the America’s Cup

NOTE: I’m writing this in Fajardo, Puerto Rico, and will soon depart for Bermuda aboard my own slightly dented, non-foiling, rather boring, quite slow-by-comparison monohull. The blog will go dark for a while, but I’ll fill you in on the passage as soon as I can.