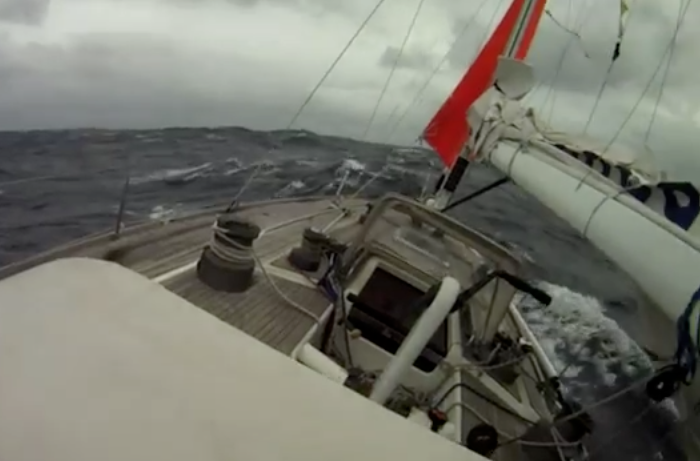 Just figured something out. That Irish-owned Swan 48, Wolfhound, currently adrift twixt Bermuda and the W’Indies, is ex-Bella Luna, the same Swan 48 that my buddy, A.J. Smith, skippered through Tropical Storm Sean (see photo up top) during the ill-fated 2011 NARC Rally (the one in which Jan Anderson lost her life aboard the Island Packet 38 Triple Stars). Check out Bella Luna‘s brokerage listing, and you’ll see she had a very comprehensive equipment list and some unique features, including a coffee-grinder in her midship cockpit, just like Wolfhound.

A.J., who has worked as a delivery skipper for some 25 years, had a hell of a trip on Bella Luna. He got within 80 miles of Bermuda, nearly lost the rig, fell off a wave so hard the speed log blew out of its through-hull fitting and flooded the boat, and in the end had to bail out and retreat to Charleston, South Carolina, to lick his wounds and put the boat back together.

A.J. did ultimately succeed in delivering Bella Luna to Tortola, with another acquaintance of mine, Drake Roberts, along as crew. Drake has a very active YouTube channel, where he has posted several videos about Bella Luna, including this interview, where A.J. describes his battle with TS Sean.

Here’s another viddy, posted by A.J. on YouTube, that gives an idea of what it was like onboard.

What’s ironic here is that both A.J. and the boat’s current owner got within spitting distance of Bermuda before making their decisions as to how to deal with their respective predicaments. I think it’s fair to say that A.J.’s predicament was considerably more severe. Yet he managed to keep his shit together and not abandon ship. I shot him an e-mail about the boat being adrift, and he confirmed that it was in fact Bella Luna, adding, “That boat has bad karma imo.”

Bad karma or not, I still say she is worth salvaging. I’m heading down to Puerto Rico next week to start sailing Lunacy back north for the season. I plan to keep my eyes peeled and am hoping maybe I’ll get lucky.