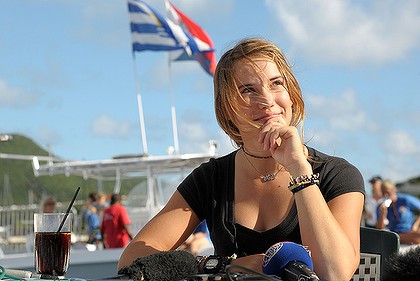 Over the weekend I had a chance to watch Maidentrip, the new documentary film about Laura Dekker, after Jillian Schlesinger e-mailed me a private Vimeo link on Saturday. This is Schlesinger’s directorial debut–her “maidenfilm,” if you will–and whatever Laura might think of it, I thought it was pretty damn good.

Coincidentally, Lyall Mercer, who did a stint as Laura’s agent and publicist, got in touch after he read my post on how Laura has disowned the film, and we had a long conversation on Friday. Our discussion was a trenchant reminder of what Schlesinger’s film might have been, but isn’t.

You’ll recall that Laura emerged on the scene just as the ever-controversial teen circumnavigator game was reaching a fever pitch back in 2009. Jessica Watson, who initially was ridiculed and criticized after she ran into a freighter during a shakedown sail on her S&S 34 Ella’s Pink Lady, was subsequently hailed as an all-conquering heroine after she completed a very impressive non-stop circuit via the Southern Ocean to and from Sydney, Australia. Then came Abby Sunderland, out of California, whose ill conceived voyage aboard Wild Eyes, a much more aggressive Open 40, ended in her being rescued after she blundered into the Southern Ocean during the winter season and quickly lost her rig.

Laura was the capstone, an impossibly young 14-year-old girl who wanted to sail around the world alone, but first had to battle the Dutch government for permission to go. The government’s questioning whether a child Laura’s age should, as a matter of law, be prohibited from pursuing a dream like this put a laser focus on a hot-button question that had plagued the sailing community for years. When hailing the accomplishments of “youngest ever” sailors, where do we draw the line? Would some poor child have to die before we understood how young is too young?

At the height of the controversy, Laura went on a flyer, ran away secretly to St. Maarten, and was dragged back to Holland against her will like a common criminal. If nothing else, this demonstrated her determination, and by the time the government finally granted its blessing, all sailors, as well as a sizable chunk of the European public, were rooting hard for her.

It would, of course, be easy to sensationalize all this in a film. The material almost demands it. And the true behind-the-scenes story, judging from what Lyall Mercer told me on Friday, is potentially even more sensational. According to Mercer, Laura’s father Dick was absolutely convinced that the Dutch government had sent an agent to rape Laura, that they were following her, were trying to get her to kill herself, and were out to sink her boat.

“Yes, there is still a great danger from Nederland!” wrote Dick Dekker in one e-mail to Mercer. “We really think the government will send somebody to break the boat or let Laura disappear somehow. We have some proof of it!”

But Schlesinger in her film only touches on this lightly. Jessica and Abby are mentioned in passing, with no mention of the controversies they inspired, and Laura’s conflict with the government is painted as an inconvenient prelude, with no mention of Laura’s running off to St. Maarten. All Schlesinger is interested in is what the voyage meant to Laura personally. The only reason she references Jessica and Abby at all is to make the point that Laura’s voyage was different from theirs. And for anyone interested in Laura as a sailor, this was in fact very important: Laura when starting out didn’t want to sail anywhere non-stop; she wanted, like most of us, to stop and visit places along the way.

The driving force in this film–more than the subtle, yet powerful soundtrack, beyond the charming animated cartography–is Laura’s own voice. In it you can hear her growing up.

“I was born on a boat in New Zealand,” she announces at the very beginning of the film. “I lived my first five years at sea, and ever since all I’ve wanted is to return to that life.”

The film follows Laura through the life of her dream as a common cruising sailor–through trips to strange supermarkets and laundromats, through the Panama Canal, through relationships with fellow cruisers, diving in the Galapagos, Polynesian landfalls, and what not–a dream so many of us have shared, and then traces her trajectory into a much more Zen-like state that some, but not all, will recognize. By the time she is halfway around the globe, Laura is much less interested in going ashore. “I love being alone,” she says. “I feel like freedom is when you’re not attached to anything.”

For me what is most impressive is how true the film is to the sport of ocean sailing. I expected, of course, as usually happens when viewing or reading sailing tales told by and for laypeople, to be offended by bits of misinformation, but Schlesinger is too wise to mention any technical detail that is bound to pass over the heads of a lay audience. (Surprisingly, the only false statement in the entire film comes from Laura’s own mouth, when she baldly misstates the reasons why Bernard Moitessier, a hero of hers, joined the Golden Globe Race in 1968.) Instead Schlesinger, through Laura, paints a somewhat blurry, impressionistic portrait of our sport that is nonetheless astonishingly accurate. She has an unerring eye for small visual details that all sailors can relate to and that also make the challenges and joys of sailing accessible and comprehensible to laypeople.

Lyall Mercer, who has not yet seen the film, told me Friday he was “totally shocked” when he heard Laura and her father weren’t happy with it. Having now seen it myself, I have to say I’m a bit puzzled, too.

“When I was dealing with them,” Mercer told me, “Jillian was everything. Laura loved Jillian. I got the impression that the only person she trusted was Jillian.”

The only specific complaint Dick or Laura have so far mentioned concerns a single scene where Laura is shown being rude to a Dutch journalist who tracked Laura throughout her voyage. But as Lyall Mercer can attest, Laura was in fact habitually “flatly rude” to journalists, and this only made his job as a publicist much more difficult and uncomfortable.

“Dealing with the Dekkers was bizarre,” he pronounced during our conversation. “It was like living in a parallel universe. Laura couldn’t stand the media, and of course the sailing community cheered that on and thought it was great. But behind the scenes Dick Dekker was saying we want the publicity. We need the sponsorship. We need this. We need that.”

What is truly ironic is that, viewed in context, the whole point to the scene with the journalist in Maidentrip is to demonstrate Laura’s loyalty to her father. We see Laura tolerating the questions she is asked, but then, when they turn to her feelings about her father, she abruptly ends the conversation. From there we segue to a description, in Laura’s own words, of how hard it was for her dad to raise her on his own.

The most telling clues in the film as to Laura’s true feelings about the publicity she craves but cannot tolerate are in the instances where we see her scowling at the cameras she has allowed on her boat. The distrust and doubt in her eyes are manifest, and we do not need words to interpret them.

Jillian Schlesinger, to her credit, doesn’t seem to be taking Laura’s disapproval too personally. “We prefer to respect Laura’s privacy and to let her speak for herself on the matter as much or as little as she’d like to at this time,” she wrote me in an e-mail.

And, of course, as Lyall Mercer pointed out to me, Laura’s disapproval will do nothing but increase interest in the film. Which is true, and if I were the evil cynical journo I aspire to be I would tell you now that this is what Laura intends.

But really I don’t believe that.

PS: I’m writing this from Puerto Rico, onboard Lunacy, where SEMOSA stalwart Phil Cavanaugh and I are about to embark on yet another small-scale, irrelevant, yet hopefully mildly entertaining cruising adventure. Stand by for updates. 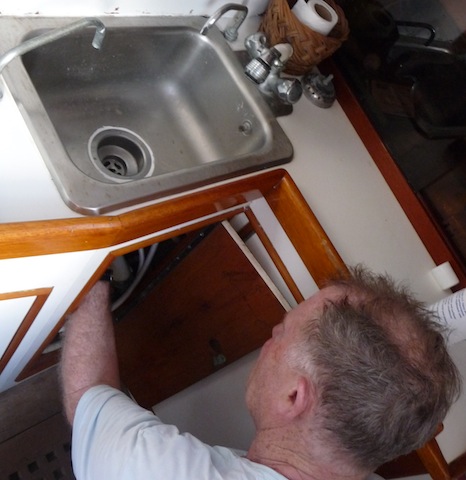 Today Phil helped me struggle through a common sink repair 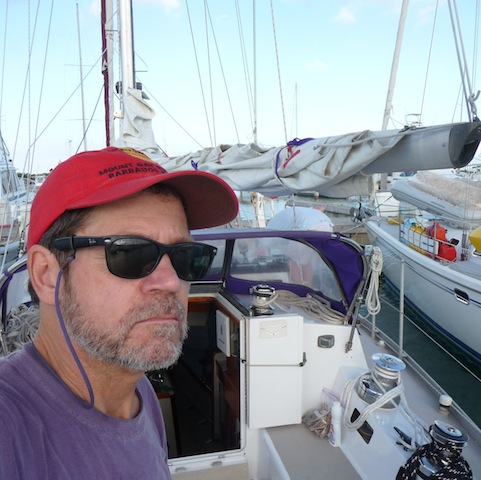 Afterwards I gloated over our success

PPS: I urge you to see Jillian’s film! Distribution details have yet to be announced, but it is still screening at film festivals. Your next opportunity to see it is at the Full Frame Documentary Film Festival, which runs from April 4-7 in Durham, North Carolina.