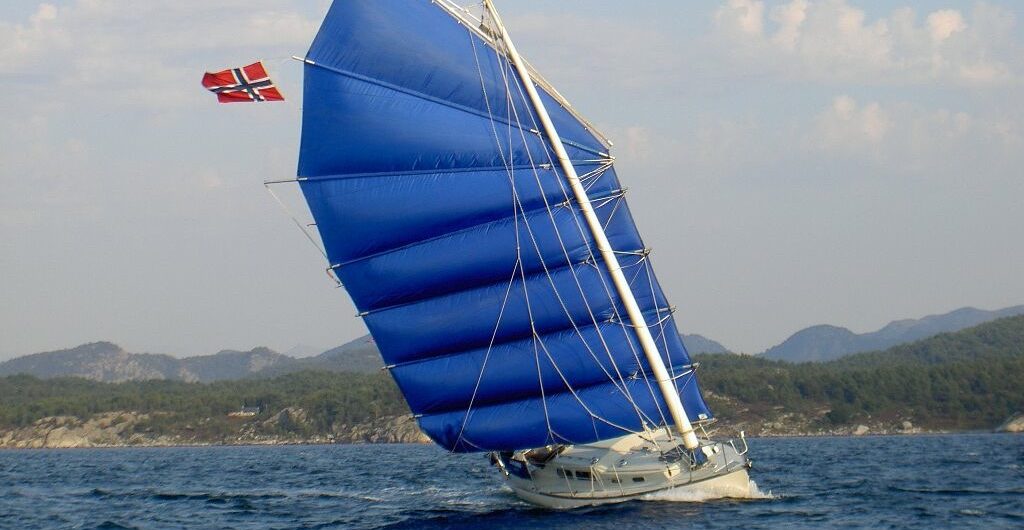 I HAVE ALWAYS been very attracted to junk rigs, first, I suppose, because they seem so very strange and archaic. As one early Western proponent, a British cruiser named Brian Platt, who sailed from Hong Kong to California under junk rig in the late 1950s, once wrote: “Nobody could have designed the Chinese Sail, if only for fear of being laughed at. A device so elaborate and clumsy in conception, yet so simple and handy in operation could only have evolved through trial and error.”

Junk rigs are in fact safer and much easier to operate than Marconi rigs, hence they probably deserve more attention as a modern cruising rig than they currently receive. As far as we know, the rig was first adapted for use on a Western vessel when Joshua Slocum installed three junk sails on the 35-foot boat Liberdade he built in Brazil in 1887 after he and his family were shipwrecked there. Liberdade performed quite well, covering a total of 5,500 miles (from Brazil to the United States) in 52 sailing days, with daily runs as high as 180 miles. Afterwards, Slocum pronounced the junk rig “the most convenient boat rig in the whole world.” 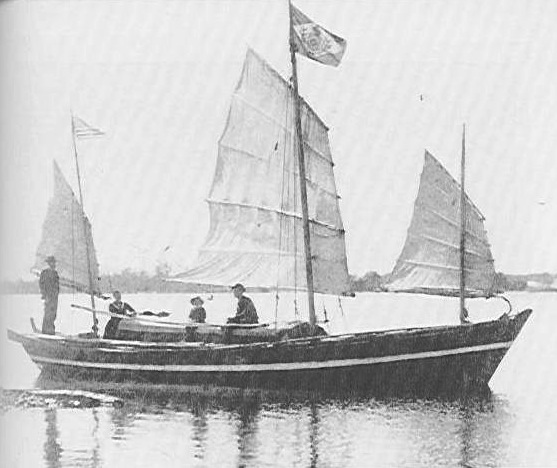 Joshua Slocum and family aboard his junk-rigged dory Liberdade

In spite of this stamp of approval, the junk rig remained mostly a unique creature of the East for another 70 years. It wasn’t until 1960, when retired British army officer Colonel H.G. “Blondie” Hasler took second place in the first singlehanded transatlantic race aboard a 25-foot junk-rigged Swedish folkboat named Jester, that Western sailors again took a serious look at this eclectic apparatus. 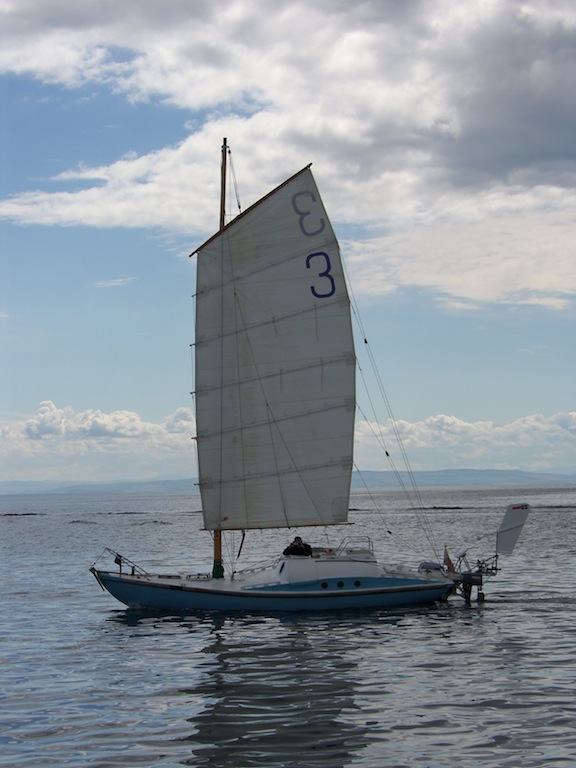 Since then it has remained persistently attractive to a very small minority of cruisers who desire an easily handled rig above all else. At least two American yacht designers, Jay Benford and Tom Colvin, both of whom favor traditional craft generally, have specified junk rigs on a number of their designs. Of these, Colvin’s 42-foot junk schooner Gazelle, designed to be built in steel or aluminum, is certainly the most popular. Junk rigs are slightly more prevalent in Great Britain, and there have even been a small number of junk-rigged British fiberglass production boats built over the years. There is at least one British specialty broker and builder, Sunbird Marine, that deals primarily in junk-rigged boats.

In essence, a junk rig consists of a fully battened balanced lug-sail (the Chinese describe it as “an ear listening for the wind”) that is hoisted on a mast that is either freestanding or only lightly supported by a few shrouds. Unlike a conventional Western sail, which has a simple unitary airfoil shape, a junk sail has a more complex scalloped shape. As such, the aerodynamics of the two sails are entirely different. Where a Western sail depends on a smooth laminar flow of air across its surface, a junk sail is believed to rely on turbulent airflow to operate effectively, although no one is exactly sure how this works.

On a Western sail, battens are used only to expand the area of the roach and to help maintain a shape that is inherent to the sail itself. They are very flat and are built into the sail so as not to disturb the airflow. On a junk rig, battens are integral to the rig. They are more tubular and stand proud from the sail, in effect acting as small booms that separate the different panels of the sail from each other. They also disturb the airflow over the sail, creating a series of vortices across its surface. Each batten is attached separately to the mast by a rope parrel and is controlled by a separate sheet, or sheetlet. These are gathered together in series through crude friction blocks known as euphroes. In some cases, if there is not room on deck to lead a single set of sheetlets aft of the sail, two separate groups of sheetlets control the battens from either side of the sail. 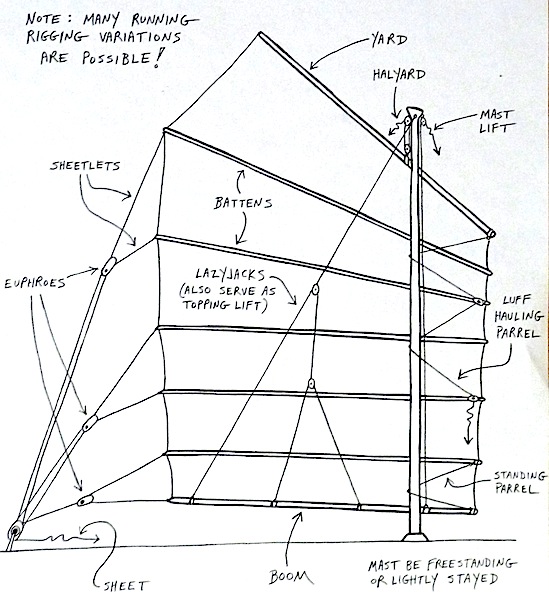 This sounds complicated, but in practice the rig is simple to operate. A junk sail can be a bit cumbersome to hoist, due to the weight of all its battens and the many bits of line that can snag on something, but once up it is easy to manage. Because the sail is balanced, with area both forward and aft of the mast, there is no risk of power-jibing, since the sail brakes itself as it pivots about the mast. It never flogs in a breeze, but instead flutters quietly. Because there is no headsail to bother with, tacking the rig is effortless. Best of all, when it comes time to reef there is no drama or anxiety. You simply release the halyard and the sail drops neatly down into its lazyjacks, panel by panel, no matter how hard the wind is blowing. There’s no need to luff up or ease sheets to spill air from the sail, nor is it necessary to tie down or secure the reefed portion of the sail. 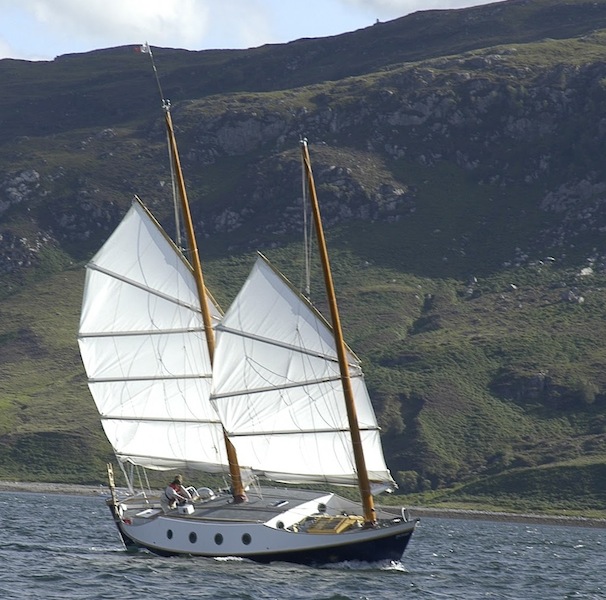 A junk rig is also inexpensive to create and easy to maintain. It requires little or no standing rigging, and the sail itself is never heavily loaded, so almost any material can be used as sailcloth. The Chinese literally build sails out of rags and old canvas sacks. Some modern junk-rig sailors like to use Sunbrella, the UV-resistant acrylic material normally used to make sail covers and dodgers, so that they never have to worry about covering their sails. Because the cloth is cut flat with no shape to it, rank amateurs can build their own sails. And if a junk sail ever tears, the hole can be safely ignored, as it does not otherwise decrease the sail’s efficiency and the battens normally prevent it from spreading from panel to panel.

Battens for a junk sail likewise can be made from most any convenient material. The Chinese have traditionally used bamboo and most modern Western rigs employ fiberlgass rods, but anything with an appropriate shape and weight can be pressed into service. So it is with the entirety of the rig. No specially made fittings are required. Most anything found laying about that looks like it might serve most likely will.

Here again is Brian Platt on the issue of maintenance:

The materials and workmanship that go into a Chinese sail, if applied to a Western rig, would blow to pieces in the first serious wind. The sail cloth is poor quality shirting-material, bound together with huge “homeward-bound” stitches. The battens are attached to the sail with a few strands of wire. There is no reinforcing in the way of the battens and no grommets. The wire is simply pushed through the cloth and round the batten a couple of times. The Chinese operates his boat on a very tight budget but he would use better materials if he thought they were necessary. In fact, the strains on a Chinese sail are so much less, due to the absence of flogging and slatting, that such materials are perfectly adequate. As for the workmanship, the Chinese sees no point in making it out of proportion to the materials. 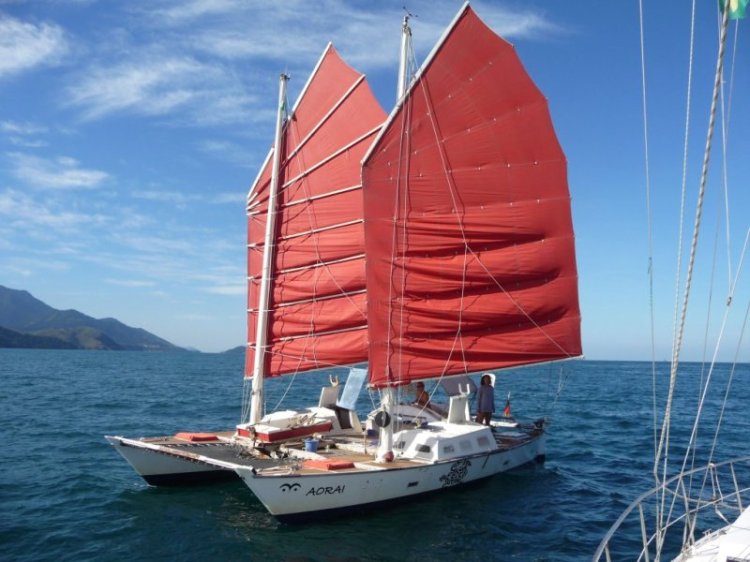 Performance-wise it is hard to compare a junk rig to a conventional Marconi rig, as the principles involved are so different. Any sailor familiar with a Marconi rig probably won’t be able to hop aboard a junk-rigged boat and sail it well without first practicing for a while. For Western sailors used to sails with a lot of draft it is hard to know when a junk sail is properly trimmed. Reportedly, even a little over-sheeting will instantly stall a junk sail and kill its drive. Those with a light touch on the helm and a strong intuitive sense of when a boat is pulling along at its best usually achieve the best results.

A junk rig generally does not sail to windward as well as a Marconi rig. Some claim, however, that though junks can’t point as high, they can sail faster closehauled. Others believe junks can point high if the panels in the sail are nicely cambered and are not kept too flat. On a reach a junk sails well, since the many sheetlets allow exact control of twist; on a run, at least in a moderate to strong wind, it is nearly ideal, as the entire sail, like a square sail, can be presented to the wind at a perfect right angle. A junk rig is weak downwind in light air, however, as usually there is no way to increase sail area by flying spinnakers and the like. A rig with multiple masts–two-masted junk schooners are a popular Western variant, while three-masted rigs are common in Asia–can, however, be flown goose-winged, with sails plopped out on either side, which helps to some extent. 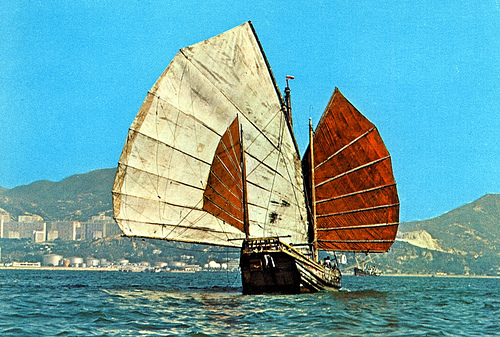 The real deal. A Chinese junk with its rig splayed out on a run

Truth be told, of course, no sailor who is very interested in performance is likely to take a junk rig very seriously. Really it is a rig for lazy cruisers, which is the other big reason I find it attractive. The older I get, the lazier I often feel when it comes to sailing, and sometimes I am fairly certain I will end up owning and sailing a junk of my own before I am done with this sport.