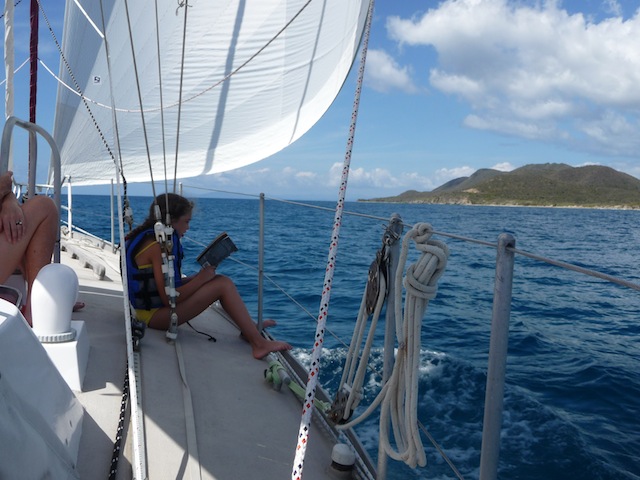 WHEN I FIRST SAILED through the Spanish Virgin Islands back in the late 1990s, the prospect of visiting Vieques was rather daunting. The U.S. Navy, operating out of its old base at Roosevelt Roads, was still using the island as a firing range and both the cruising guide and charts I had on hand were full of dire and confusing warnings about the place. Rather than risk an accidental shelling, I steered clear and focussed instead on the neighboring island of Culebra. But I always wondered about that long bumpy silhouette on the southern horizon, and one of my major goals when I based Lunacy on the east coast of Puerto Rico this winter was to at last find out what’s over there.

After some dramatic local protests that ultimately attracted international attention, the Navy finally stopped bombing Vieques in 2003 and the property it once owned there, about two-thirds of the island, is now a National Wildlife Refuge. Sounds like a recipe for a superb Caribbean cruising ground, doesn’t it? Having spent last week there noodling around with Clare and the girls aboard Lunacy, I can tell you that’s exactly what it is, though several navigational details are still a bit baffling.

One nice thing about Vieques compared to Culebra if, like us, you sail out of Fajardo is that it’s much easier to get to. While visiting Culebra usually involves a day-long thrash to windward against the prevailing easterly tradewinds, you can sail down to the west end of Vieques on a fast reach and then hop to windward along the south coast in a series of short jumps from anchorage to anchorage.

We are a singularly unambitious lot when in Family Cruising Mode, so we dropped our hook off what is known as “Green Beach” (so called by the Navy) at the western tip of the island just a couple of hours after leaving Fajardo. This was something of an act of faith, as this area, like much of the island’s coast, was designated on all our charts as a Restricted Area where anchoring was not advised due to the “possible existence of unexploded ordinance.” During our approach around the long pointy shoal that stretches northwest from Punta Arenas, I had noted that both my print charts (including one in a brand new Maptech chart-kit booklet) had seriously misplaced the buoy that is in fact at the end of the shoal, so already I was inclined to regard what they had to say with skepticism. This, I’ve learned, is an appropriate attitude when cruising anywhere in the Spanish Virgins, especially around Vieques. 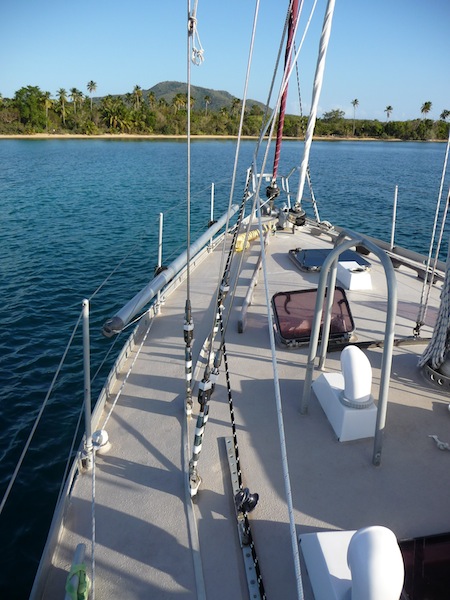 Anchored off Green Beach. No ordinance in sight

The beach itself is fabulous. There was just one other boat anchored there, so we pretty much had the place to ourselves. We saw lots of turtles in the water around us and spent a fair amount of time swimming with snorkels on looking for them. We never saw any underwater (nor did we see any unexploded ordinance), but we did find large beds of baby sea urchins nestled among the large coral shelves just off the beach. You definitely need to watch out for these when taking a dinghy ashore here. 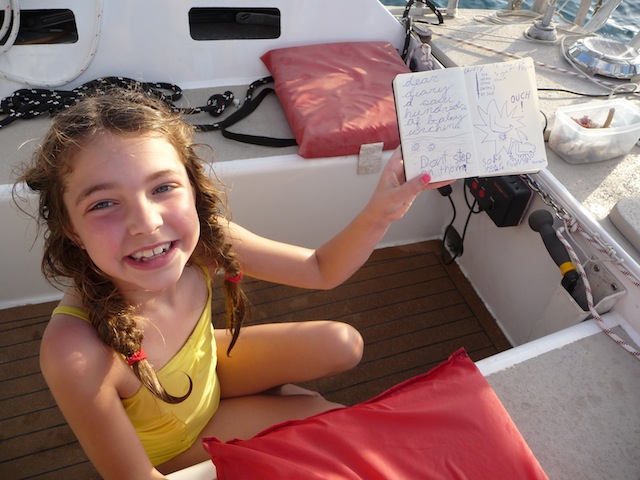 Lucy displays her post-swim warning about the urchins

After a peaceful night in a very mild cross-swell that wrapped around Punta Boca Quebrada to the south of us, we motorsailed next afternoon around to the small town of Esperanza on the south coast. Here we were confronted with maximum navigational confusion. 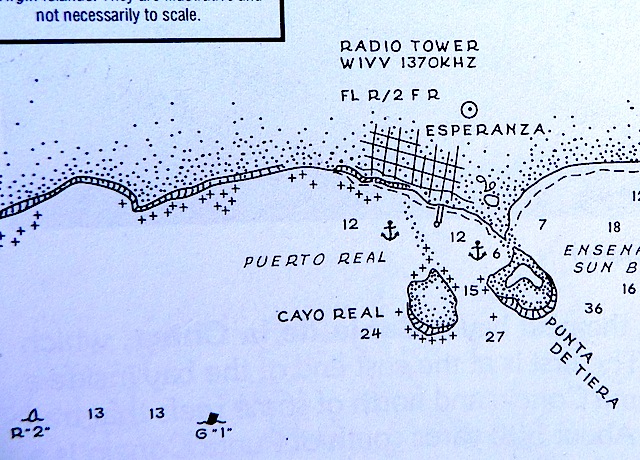 Sketch chart (with soundings in feet) from the 1997 edition of the Yachtsman’s Guide to the Virgin Islands. It incorrectly shows two buoys at either end of a 13-foot shoal lying just southwest of Esperanza. It correctly shows that the shoal in the harbor between the town and Cayo Real is impassable. The guide’s text recommends anchoring in the protected pocket east of the shoal, but this in fact is probably a bad idea 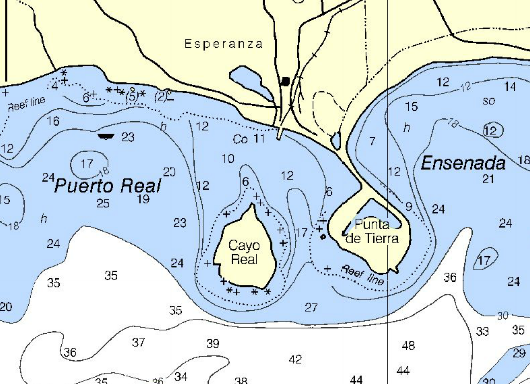 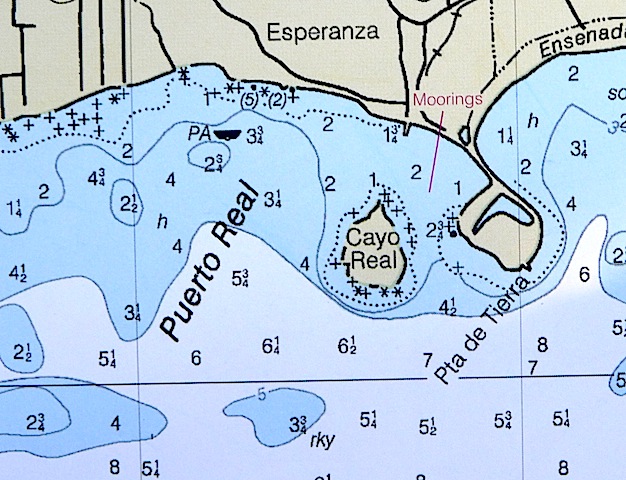 Maptech chart (with soundings in fathoms) which correctly shows no buoy on the offlying shoal, but is very ambiguous about the shoal between Cayo Real and shore. It also shows there are moorings east of Cayo Real, which is true, but they are for small local skiffs only. There are some moorings for transients just west of the Cayo Real shoal 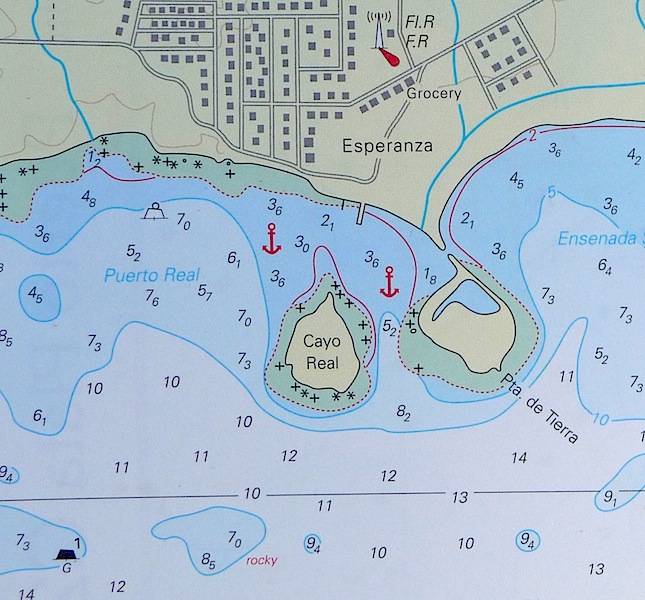 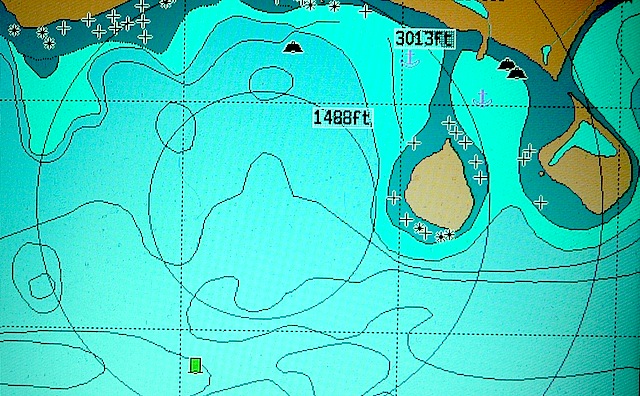 Esperanza is definitely the place to be when visiting Vieques, so it’s important to get this right:

1) There are no buoys of any kind on the offlying shoal, but you can safely pass over it if you draw up to 9 or 10 feet of water (I’d guess the minimum sounding there is about 12 feet).

2) Unless you are in a serious shoal-draft vessel (less than 4 feet) don’t even think about crossing the shoal north of Cayo Real, and if you do favor the north side and stay close to town.

3) The anchorage west of the Cayo Real shoal, though much rollier, is favored by transient sailboats, as it seems to be easier to anchor there. The bottom on both sides is heavy grass with occasional depressed pits of sand. You’re very likely to drag if your anchor is in the grass, but you’ll be very secure if you can get your hook down in sand (even if it does drag a bit, you’re sure to have a bite once it hits the edge of a pit). Having surveyed a bit in our dinghy, it seemed to me there was, simply, a lot more sand pits, and bigger ones, on the west side of the shoal. The approach on the west side is also much easier.

The main feature in Esperanza is the Malecon, or waterfront promenade, which fronts the town’s tiny main drag. Here you’ll find a couple of tiny souvenir stands and a small selection of beach bars, plus one truly gourmet-class restaurant, el Quenepo, which serves the best food I’ve ever eaten in Puerto Rico (so far). Walking inland you’ll see an amazing array of art-installation gardens surrounding modest but for the most part well maintained houses. 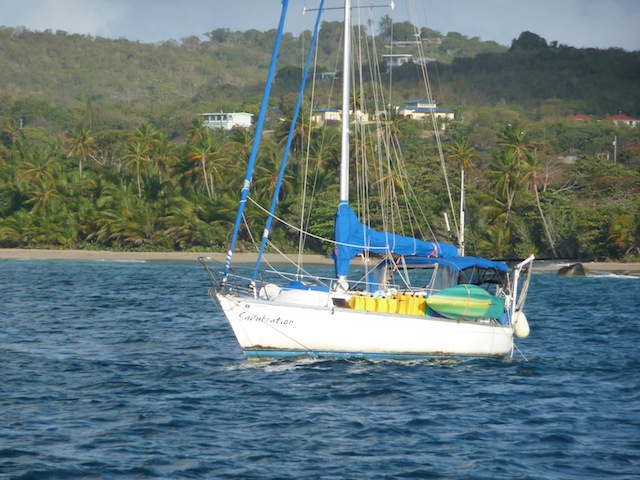 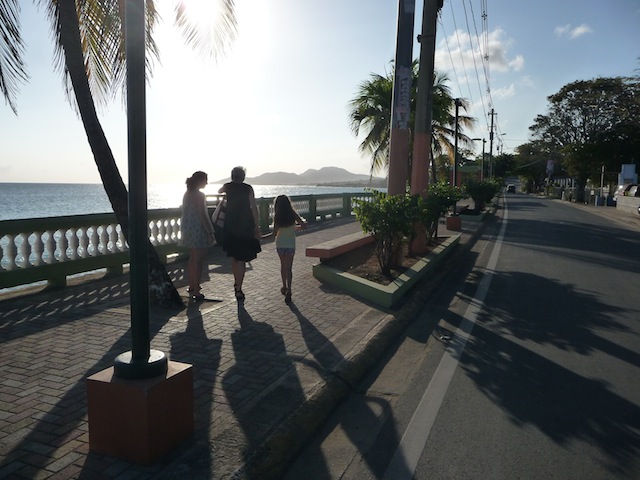 Crew of Lunacy takes a stroll along the Malecon 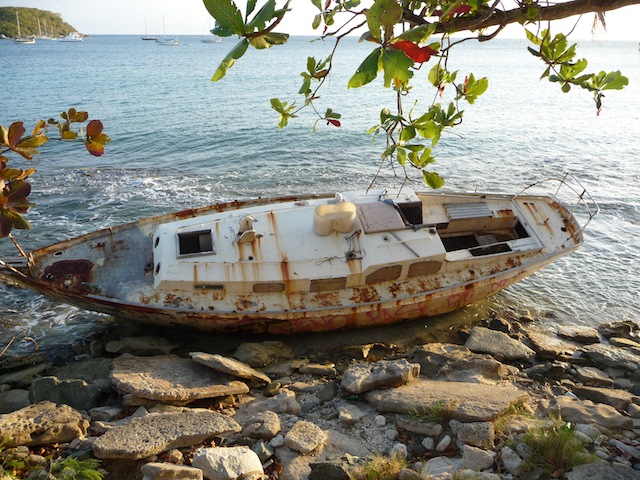 Things can go pear-shaped here if you don’t anchor carefully. This wrecked steel yacht lies just beneath the Malecon on the north side of the west-side anchorage. There’s another yacht wreck on Cayo Real on the edge of the east-side anchorage 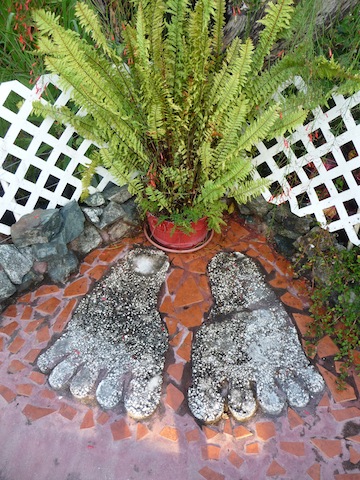 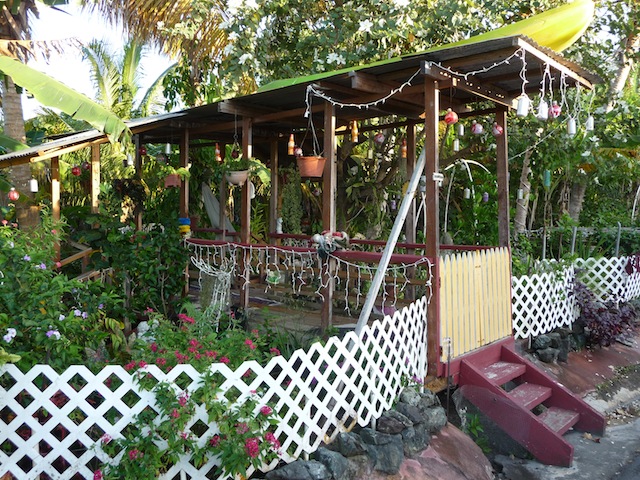 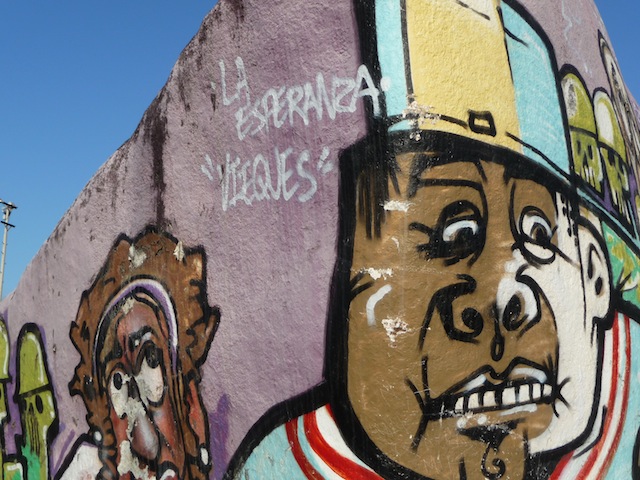 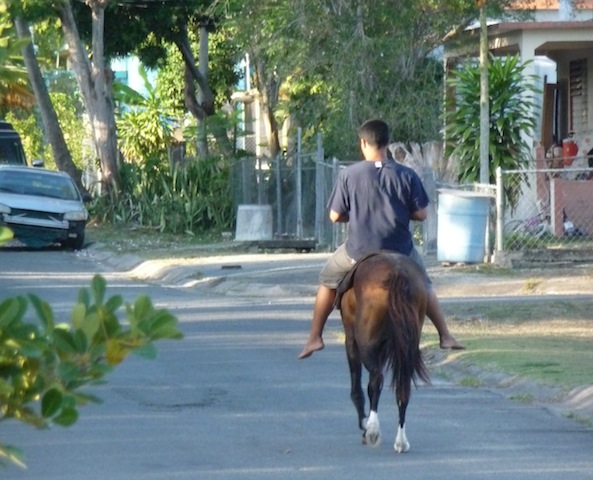 Horses are still a major mode of transportation here

A short distance east of Esperanza lies Puerto Mosquito–a.k.a. “Bio Bay”–which is famed for its bioluminescence and is certainly the biggest tourist attraction on the island. We had seen billboards and posters advertising its wonders all the way from San Juan to Fajardo, and there are various businesses offering nighttime kayak tours, but I was determined, if possible, to see it from our very own dinghy.

My old Yachtsman’s Guide states that it is not possible to anchor in the vicinity of the bay, but one of my print charts and my electronic chart both showed a little anchor symbol outside the entrance to the bay (just inside the boundary of another Restricted Area allegedly full of unexploded ordinance), so I thought we should at least give it a look. In the afternoon, before the sun got too low, we motored over from Esperanza and crept carefully past the reef into the outer bay. After three tries dropping the hook, we finally ended up in a spot that had enough water to feel comfortable. Unfortunately, it was also exposed to quite a bit of ground swell that was rolling in from the south. Not long afterward another boat came in and anchored just inside of us. 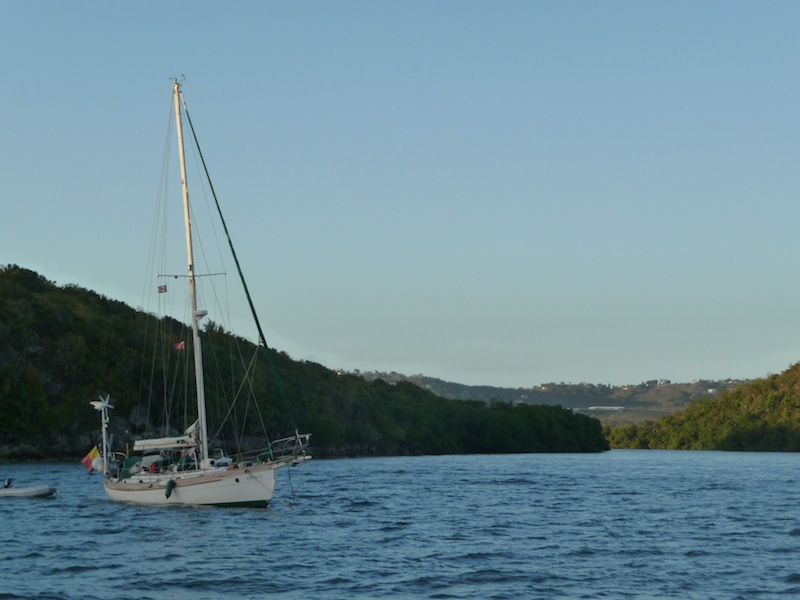 Belgian-flagged Hans Christian cutter that anchored outside Puerto Mosquito shortly after we did. You can see from the angle of its mast how rolly it was. To the right you can also see the entrance to the famed “Bio Bay”

We quickly realized we’d all end up sleeping in a heap on the floor if we tried to spend the night here. But it did seem more than secure enough for us to leave the mothership on a short dinghy excursion, so we developed a plan. We’d wait for sunset and then dinghy into the bay for our own private Bio Tour. When we were done we’d come back out to the mothership, wait for moonrise, hoist our anchor, and then exit west to the more comfortable Ensenada Sun Bay, just east of Esperanza, which looked to be very easy to enter in low-light conditions. 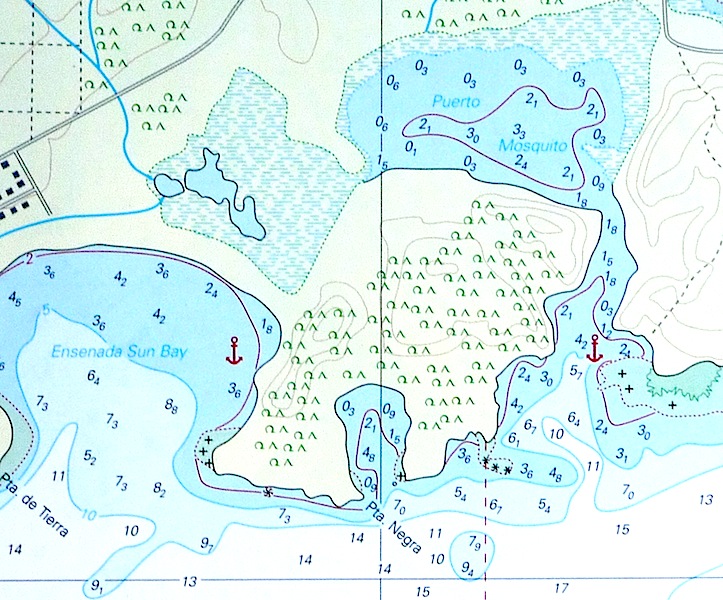 CYC chart showing a tenable anchorage outside Puerto Mosquito. We ended up dropping our anchor almost exactly where the anchor on the chart is. Afterwards we moved west to Sun Bay and anchored just as precisely

All this worked like a charm, but I have to say I found the Bio Bay itself to be a bit disappointing. After all the build-up I was expecting bioluminescence like I’d never seen before. What we saw was good, but it wasn’t really any better than bioluminescence I’ve sometimes seen offshore or in the Kennebec River in Maine. And, of course, the fact that there were dozens of yahoos paddling around in kayaks acting like they were having a religious revelation didn’t add anything to the experience.

The following day, after we spent the morning exploring the sweeping stretch of beach that girdles Sun Bay, we toddled back to the anchorage off Esperanza, then went ashore to find a taxi to take us across to the island’s main town, Isabel Segunda (often written as Isabel II), on the north shore. I forgot my camera, so cannot regale you with pix, but fortunately this was the most forgettable part of the trip. Aside from the small fort/museum on the hill overlooking town, the community is not very attractive, except if you’re looking for a place to rent a Jeep with a day-glo paint job.

The next day the wind was light, but from the southeast, so we had nice angles most of the way sailing back to Fajardo. With the screecher up to pull us along (see photo all the way up top) we made decent time and logged minimal engine hours.

The denouement of our trip was a day spent in old San Juan, checking out Spanish forts and stuff: 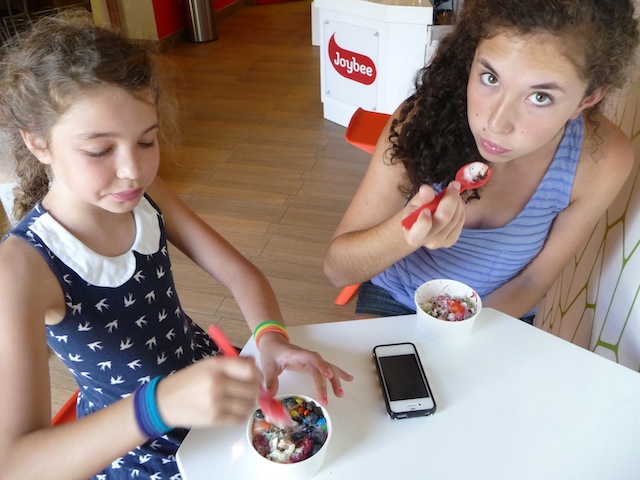 Lucy and Una feast on frozen yogurt, with multiple toppings, sold by the ounce 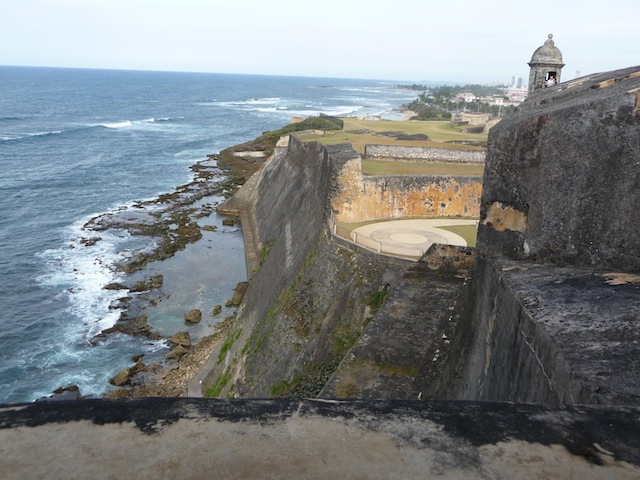 The old town is surrounded by massive walls and is studded with major fortifications. This is shot from the San Cristobal fortress looking east down the coast 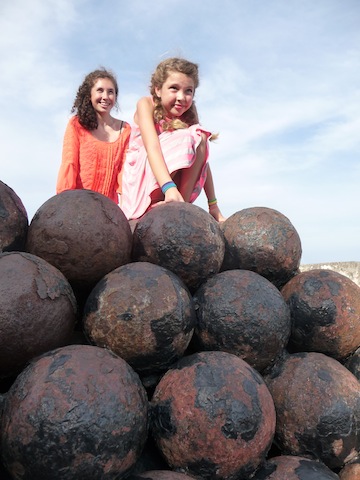 The girls atop a pile of cannonballs at San Cristobal 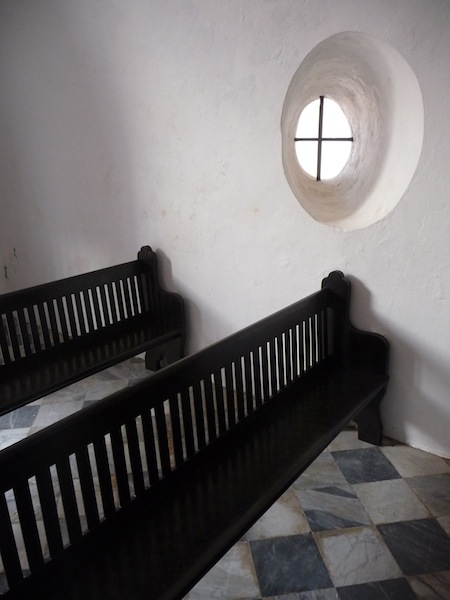 Benches in the chapel inside the El Morro fortress 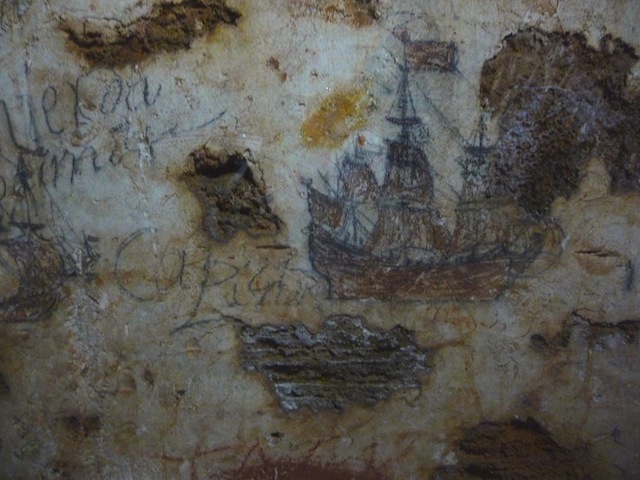 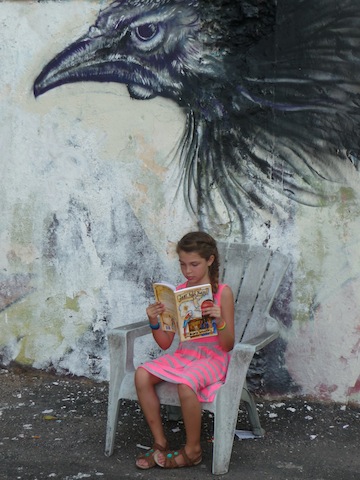 Lucy reads to a giant graffiti rooster in a back alley 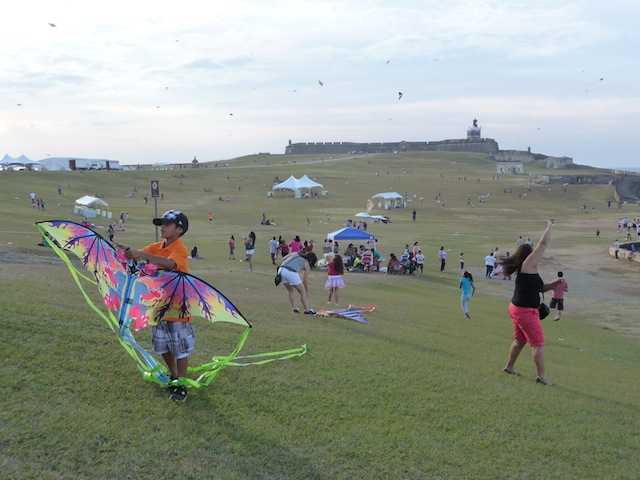 El Morro as seen from town