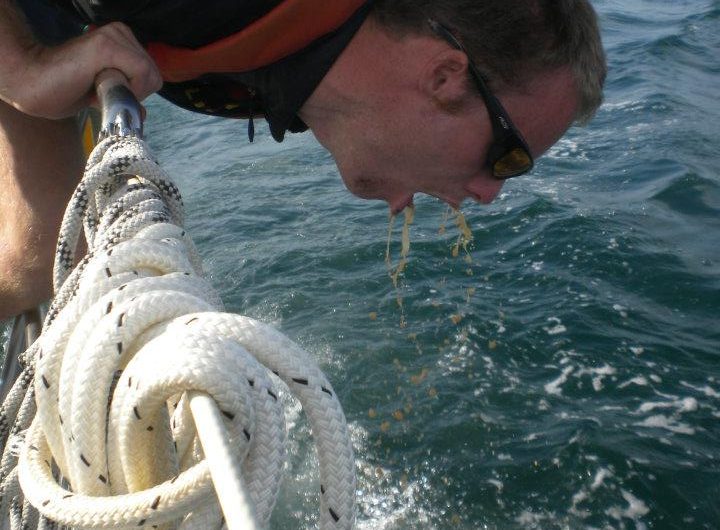 THE FIRST TIME I almost lost it on a boat was during my first job with a boat magazine more than 25 years ago. Soon after I was hired, I was sent out to test a Grand Banks trawler on Block Island Sound, and on the run back from Block Island to Mystic, Connecticut, I made the mistake of helping myself to some Pringles potato chips I found on the flybridge. I also made the mistake of eating the whole can. Those familiar with Pringles, and with the motion of a Grand Banks trawler in a beam sea, will appreciate the consequences.

The first time I actually did lose it was on an Alden schooner in the Gulf Stream off southern Florida. We had taken on diesel fuel that morning and managed to spill quite a bit of it all over the floor of the main saloon. The whole boat thus reeked of fuel, and this, combined with a nasty chop in the Stream, got me feeling queasy. What blew me over the edge was when a shipmate, sensing my dilemma, suddenly plopped down beside me and began whispering in my ear, describing a greasy breakfast in pornographic detail. He then cackled with glee as my own breakfast suddenly exploded out my nose.

Herein lies an important lesson for the seasick sailor: forget your pride and do not try to hold it in. Another lesson I learned that day is that it’s not a good idea to put a boat’s fuel fill in the main saloon.

It is thanks to the curse of seasickness that we cruisers often have to go through hell to get to paradise. No doubt many of you women out there have remarked on this. You may spend weeks sailing through some idyllic cruising ground, gunkholing from one placid anchorage to another, when suddenly Captain Bligh drags you off on a grueling offshore passage to some place that looks very much like the one you just left. You will be violently ill the entire time and will likely wonder if your mate is doing this just to torture you. In many cases he will in fact feel just as sick as you, but unfortunately, when it comes to boats, men do suffer from a chronic inability to distinguish adventure from discomfort. 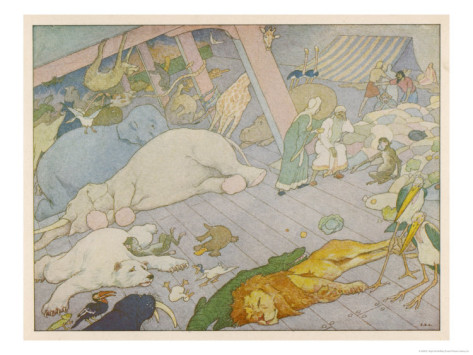 Even on Noah’s Ark, mal de mer was a serious problem

To deal with the problem, it helps to understand its causes. The process, however, is poorly understood, in spite of the fact that people have been puking in boats for thousands of years. The most current thinking is that seasickness is caused by a “neural mismatch.” The first tenet of this theory is that we get seasick when we receive conflicting information from our eyes and inner ear about what is moving around us. This explains why we often get sick when we are down below and then get better when we come on deck and watch the scenery for a while. Down below our eyes tell us nothing is moving in relation to us, but our inner ear tells us everything is in fact lurching around, so we feel ill. Conversely, on deck, where we have the sky and scenery as a fixed reference, our eyes and inner ear tell us the same thing (that everything is lurching around), so we feel not so ill. 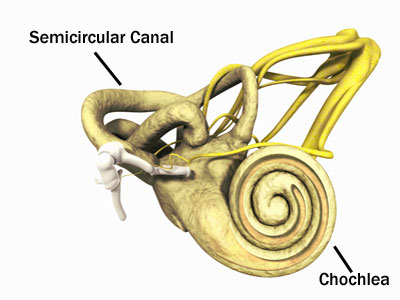 The root of the problem: our inner ear acts as an internal gyroscope and senses movement

But this does not explain why many people get sick even while on deck. Hence the second tenet of the neural-mismatch theory: we get seasick not only when relative-motion data from the eyes and inner ear is in conflict, but more fundamentally when it conflicts with the brain’s programming for what is and is not normal. The program, if you will, is set for a stable environment, and when it is contradicted a nausea alarm is triggered. Anything else that triggers the alarm–the smell of diesel oil, greasy breakfasts, etc.–will, of course, only aggravate things.

The second tenet of the theory also explains what for most of us is the most important fact about seasickness, which is that after a while it goes away. Over time the brain’s programming accepts that an unstable environment is normal and the nausea alarm is deactivated. Having achieved this happy state, we are then confronted on going ashore with the opposite problem of “landsickness,” known also as mal de debarquement. I myself am prone to this condition and after long voyages have sometimes been so wobbly-kneed that I can’t stand up straight. Usually, though, I can solve the problem by crawling on my hands and knees to the nearest bar. A strong dose of beer or rum, I have found, will quickly ameliorate the debilitating effects of an abnormally stable environment.

There are several facts not accounted for by the neural-mismatch theory. For instance, women are more likely to get seasick than men, and this likelihood increases during pregnancy and menstruation. Also, very young children often do not get seasick, though their susceptibility usually increases until about the age of 12, whereafter it steadily decreases. All of which suggests something hormonal must be going on. After all, there usually is. The neural mismatch theory also does not explain why some people never get seasick at all, why others never adapt and get over it, or why such immunity or susceptibility may suddenly appear or disappear for no apparent reason. Those with different theories, therefore, are always welcome to apply.

One of the biggest problems with seasickness is that people experience it in very individual ways. It can take time and some cruel trial-and-error experience to learn what does and does not set you off. For example, I usually don’t have any problems, but I have learned the hard way that I cannot tolerate being inside wrap-around bimini enclosures while at sea. Looking at the world through a smeary isinglass prism will set me to chundering very promptly, and I now therefore avoid sailing on boats with cockpits like this whenever possible. In figuring out your own vulnerabilities, it helps to be aware of the threshold symptoms of seasickness. Most people, before they actually get nauseous, will first feel sleepy. You may also feel a bit warm and clammy. In some cases you can keep from getting sick by peeling off a layer of clothing to ventilate your body a bit and/or by simply taking a nap.

Unfortunately, remedies for seasickness are even more individual than triggering causes. What works very well for one person won’t work at all for another, so again you may have to go through a long, uncomfortable process of trial and error to figure out what palliative is best for you. 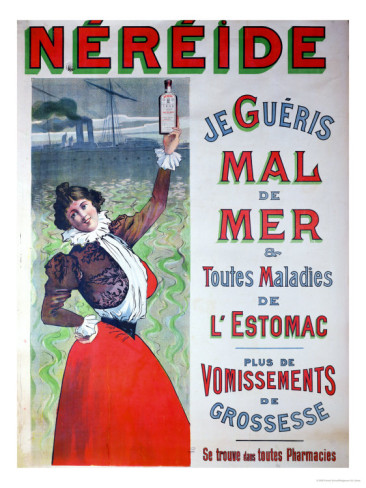 A lot of crunchy-granola people like to try homeopathic cures. There is no shortage of options, but I personally have never seen any of them work for anybody. And believe me, I have sailed with a lot of seasick people. Because all the touchy-feely remedies are pretty useless, you’ll sometimes see people trying all of them at once. I remember one woman I often sailed with who would sooner cut off her head than so much as take an aspirin. She always covered her wrists with acupressure bands, wore rose-tinted sunglasses, gnawed on raw ginger, practiced transcendental meditation, etc., but still ended up hanging over the rail every time we went out together. 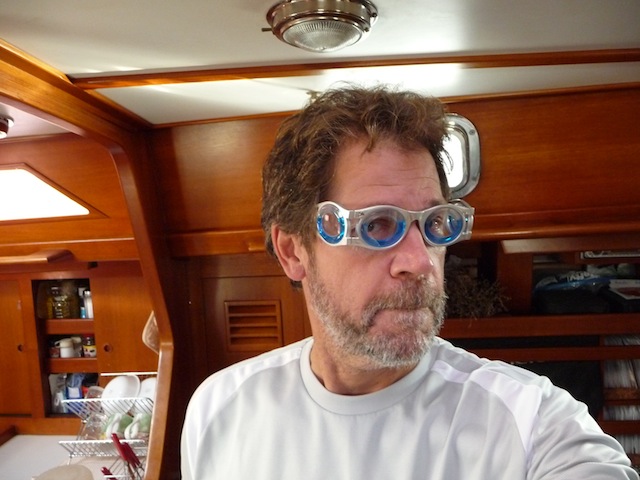 Here I am modeling a weird pair of anti-seasickness goggles. I loaned them to some seasick-prone friends who did not find them particularly useful

Relying on drugs also has its pitfalls, as any truly effective medication is bound to have side effects. Some people experience them acutely; others will hardly notice. In my experience, people tend to have the strongest reactions to scopolamine (hyoscine). One shipmate I crossed the Atlantic with had a great fondness for “scope” patches and stuck a new one behind his ear every few days. Soon his neck was all polka-dotted with them, but still he said he felt absolutely horrible. As an experiment, I one night picked off the patches while he was sleeping. He woke hours later boasting about how great he felt and was mightily chagrined when I pointed out why.

Generally speaking, the most effective, least intrusive drug I know of is Stugeron (cinnarizine). Unfortunately, it’s not available without a prescription in the U.S., but you can buy it over the counter in places like the U.K. and Bermuda. For a long time it was the only drug I had ever seen work for someone who was already seasick. Then just last summer I sailed with a guy who had the same experience with Dramamine.

You absolutely cannot count on this sort of luck. For most people, once you feel seasick adaptation is the only route to feeling better. If you’re going to take a drug, you should start dosing yourself at least a few hours before you anticipate needing it. If possible, start a day or two in advance. You should also acclimatize yourself to the motion of a boat in stages, although this is often not practical. Whatever you do, keep your body hydrated and well nourished while afloat and definitely avoid any odors, food, experiences, or people that normally nauseate you.

If you follow these tips there’s a good chance you and Captain Bligh can eventually figure out how to trade your land-legs for sea-legs without feeding the fish. Then, when it’s time to switch back to land-legs, hopefully we’ll run into each other on the crawl to the pub.

Drugs and Their Side-Effects

As mentioned, I think Stugeron is most effective, so I’d start by trying that one first. If it doesn’t do the job, start working through this list until you find one that does work for you. Do not take more than one at a time.

Cinnarizine:  An antihistamine that inhibits vomiting. Side effects include drowsiness and difficulty concentrating. Brand name: Stugeron

Domperidone:  Affects stomach muscles and accelerates the passage of food to the intestine, which helps prevent vomiting. Side effects include dizziness. Brand name: Motilium

Meclizine: An antihistamine that depresses the central nervous system and vestibular stimulation. Side effects include drowsiness and dry mouth. Brand names: Bonine, Dramamine

Promethazine:  An antihistamine that inhibits vomiting. Side effects include drowsiness and dry mouth. Brand names: Avomine, Phenergan 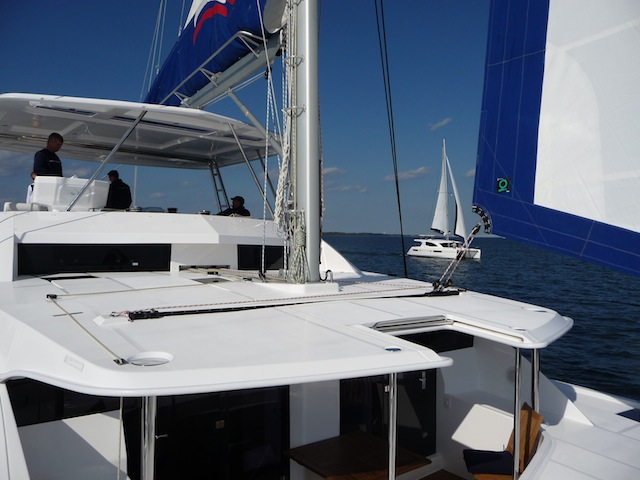