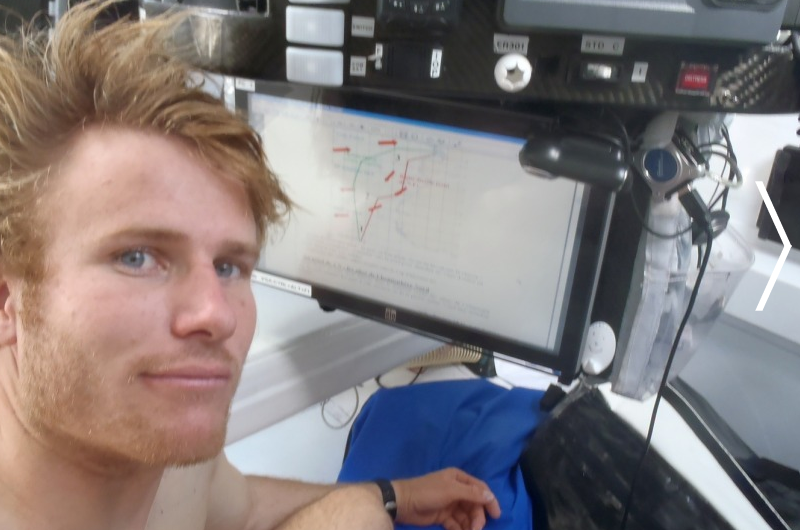 BARRING THE UNFORSEEN, this is the face of the next winner of the Vendee Globe, Francois Gabart, who should reach Les Sables d’Olonne aboard MACIF very early Sunday morning, thus setting a new race record of 77 days, give or take a few hours. I hope you’ve been following this one, as it’s really been a doozy. For a significant portion of the race Gabart and his (now) second-place competitor, Armel Le Cleac’h on Banque Populaire, were more or less in sight of each other, and at several different points different sailors broke the record for miles covered in 24 hours by a singlehanded monohull (it’s now up to 545, which frankly I find just staggering).

Plus, of course, there has been the usual litany of dramatic gear failures, most recently aboard the third-place boat Virbac Paprec 3, skippered by Jean-Pierre Dick, who has lost his keel. He is now struggling to stay in the race regardless by sailing conservatively with all his water-ballast tanks filled up. He should fall into fourth place sometime today as Alex Thomson on Hugo Boss shoots by him, and soon he’ll have to decide whether to bail out and put into the Azores. 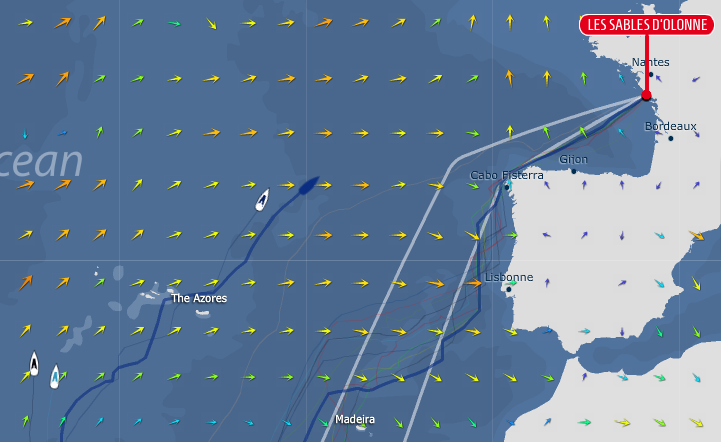 Positions of the top four boats as of this morning 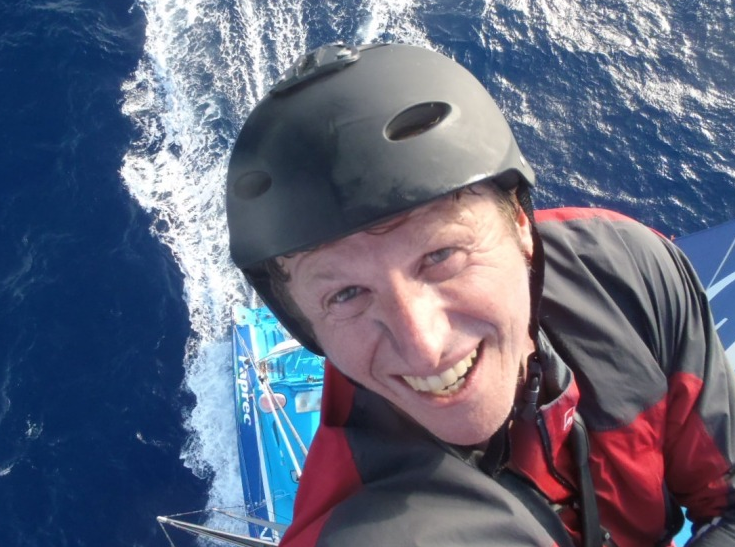 Jean-Pierre up his mast. Wouldn’t want to do this with keel off, I reckon

Jean-Pierre’s predicament has led to a fair amount of hand-wringing about the design of these boats, the gist of which is neatly summed up in a recent blog post by Elaine Bunting over at Yachting World. Noting that we’ve lost two keels in this edition of the Vendee Globe, six keels in the last edition, and a total of 17 keels since the race first started back in the late 1990s, she asks: WHY?

It is, she assures us, an “immensely complicated” question.

To me it seems pretty darn simple. Keels have been falling off boats with alarming regularity for some time now–not just off cutting-edge race boats, but also off much more middle-of-the-road race boats, and even the occasional plain-vanilla production cruising boat. (Some, for example, may recall this post about a charter boat that lost its keel in the UK a while back.) This is because keels, as they have grown ever more efficient as underwater foils, have become much deeper, much more leveraged structures with much smaller attachment points. 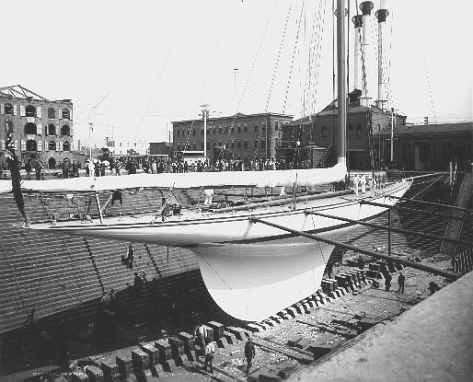 Guaranteed: this keel will not fall off this boat

It wasn’t so long ago that even cutting-edge race boats had amazingly conservative keels. Keels were very long, were structurally part of a boat’s hull, and they never ever fell off. They also didn’t look much like foils and were pretty inefficient.

It’s actually surprising how long it took yacht designers to figure out what a truly efficient keel should look like. But most keels now are separate appendages that are fastened to a hull, and the fastest keels are very deep, have very short roots, and have very heavy ballast bulbs stuck on at the end of them. Even worse, the most competitive keels, like those on the IMOCA 60s used in the Vendee Globe, aren’t even foils any more. They are just ballast-support systems that swing back and forth while a boat is sailing. Daggerboards provide the hydrodynamic lift, and the keel has become a very skinny, very deep moving part. 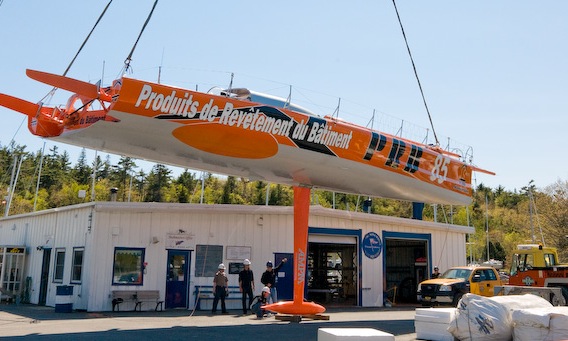 This keel is very likely to fall off. You can tell by just looking at it

To me it seems a wonder that more keels don’t fall off in the Vendee Globe. If they really want to keep it from happening, they’ll have to impose some pretty severe design strictures.

LASTLY: I want to drop a word about my man Alessandro di Benedetto, who is bringing up the rear of the VG fleet on Team Plastique (the only boat this year with a fixed keel). Alessandro has been through hell lately: up the mast twice, lost two sails, no time for sleeping, and he has broken his ribs in a knockdown. But he’s still smiling, and still sailing as hard as he can. 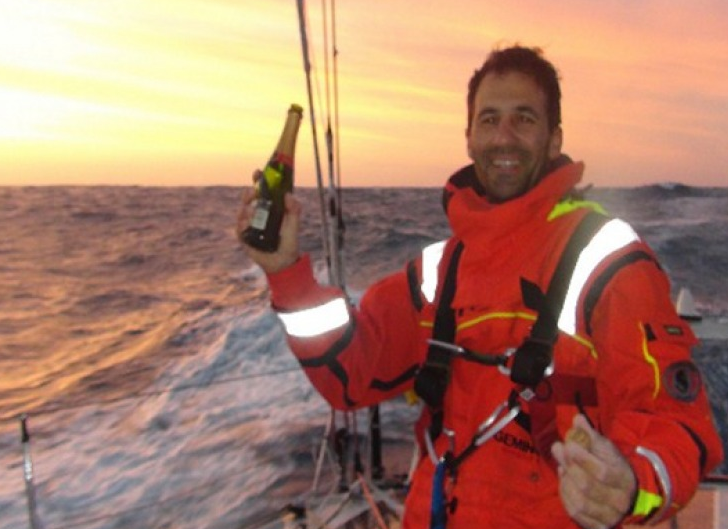 He has sailed a great race in a very uncompetitive boat and deserves a much better chance next time. 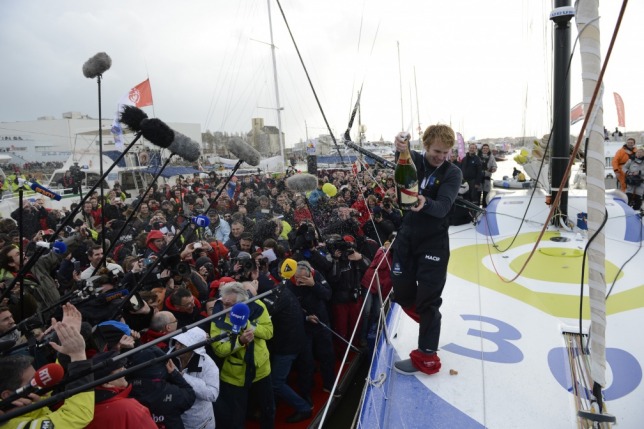 MONDAY MORNING UPDATE:  He’s done it! Francois Gabart finished a bit later later than I expected, on Sunday afternoon, with an official time of 78 days, 2 hours, smashing the previous record by a six-day margin. Armel le Cleac’h was just three hours behind him! The tightest finish in the race’s history. Meanwhile, Jean-Pierre Dick has sailed past the Azores and is hoping to finish the race without his keel.