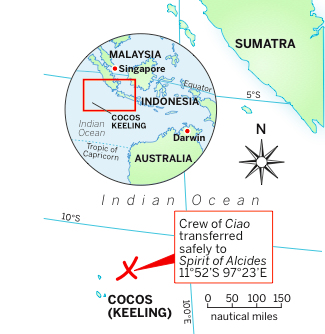 This sad bit of video, posted on YouTube by Yachting World just a few days ago, documents the last few moments of the life of Ciao, a Sweden Yacht 45 that sank in the Indian Ocean back in September during the current World ARC rally. Ciao and her owners, Srecko and Olga Pust of Slovenia, were en route from Indonesia to Cocos Keeling when the boat hit a USO (unidentified submerged object) about 40 miles short of her destination. Ciao‘s rudder was badly damaged and she quickly started taking on water.

The Pusts issued a Pan-Pan call that was answered by three other World ARC yachts in the vicinity. One of these, J’Sea, a Jeanneau 52.2 skippered by John Cuzner of Canada, took Ciao in tow while the Pusts struggled to control the flooding. Ultimately, however, as Ciao started foundering, the tow had to be abandoned.

The Pusts, who had been living aboard for several years, worked to evacuate as much stuff as they could, first sending Olga off the boat in their inflatable dinghy with a big clump of baggage. Srecko stayed aboard until the very end and finally came off in Ciao‘s liferaft.

A fourth World ARC vessel, Zoe, which was steaming to the scene with a high-capacity pump, was 9 miles out when Ciao finally sank.

The viddy was shot from on board Spirit of Alcides, a Challenger 39 belonging to Gus and Linda Pallot of Australia.

The World ARC fleet is currently in the South Atlantic en route from Cape Town to St. Helena and is due to finish its circumnavigation in St. Lucia in April.

I have two comments:

1) The Pusts are to be commended for keeping their heads and issuing a Pan-Pan call instead of a Mayday and for staying with the boat as long as possible. A lot of people these days would have panicked and would have immediately called for an evacuation.

2) If Ciao had been a metal boat, she might well have survived her encounter with the USO.