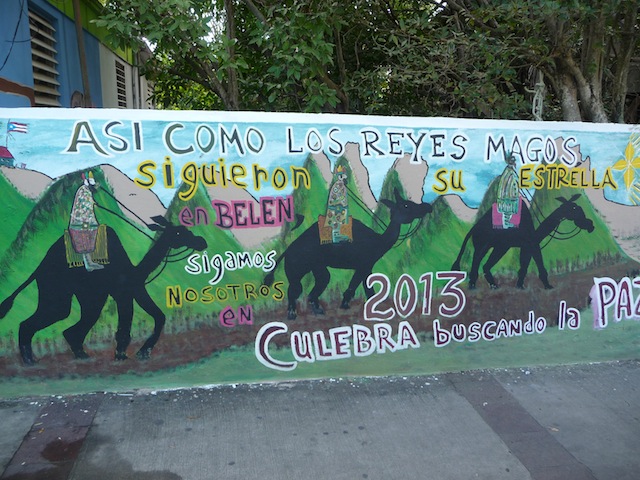 O FUN-LOVING BOAT-WORSHIPPING CHILDREN of the Internet! Forget what you heard about doing up New Year’s on St. Bart’s. Tis a hyped-up overrated overcrowded experience if ever there was one, IMHO. I’m here to tell you: Culebra is the place to be (or have been). None of this dandified Beautiful People On Their Superyachts pretense and nonsense. On Culebra they know how to turn the page on the calendar with Egalitarian Style. 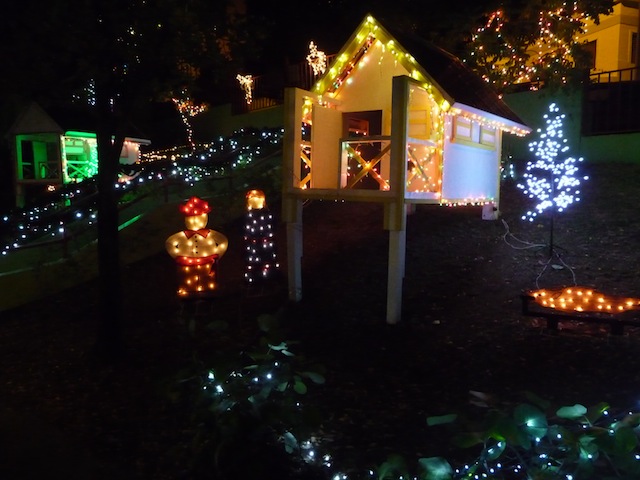 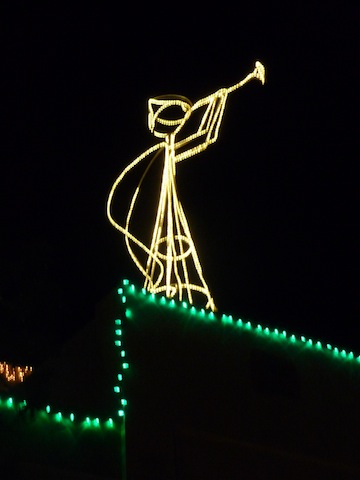 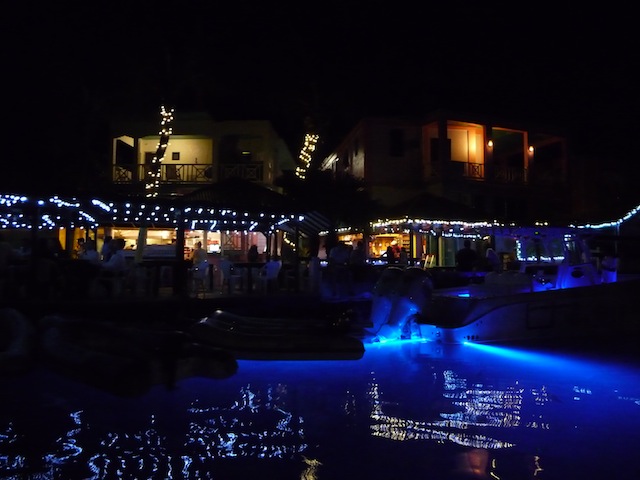 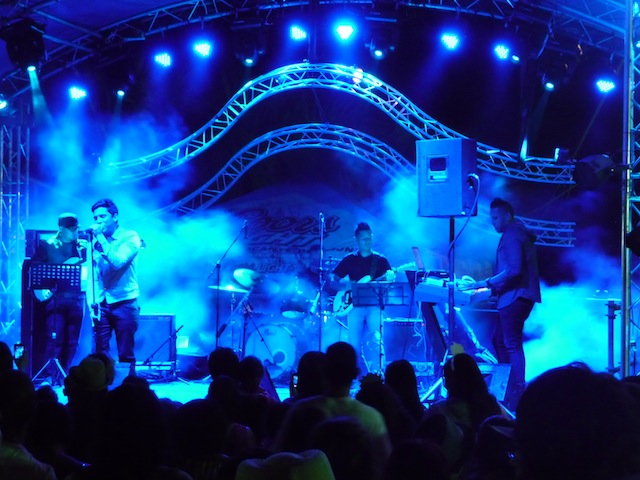 …and of course a soundstage, right on the waterfront, with disco lighting, smoke machines, and passionate salsa pop music… 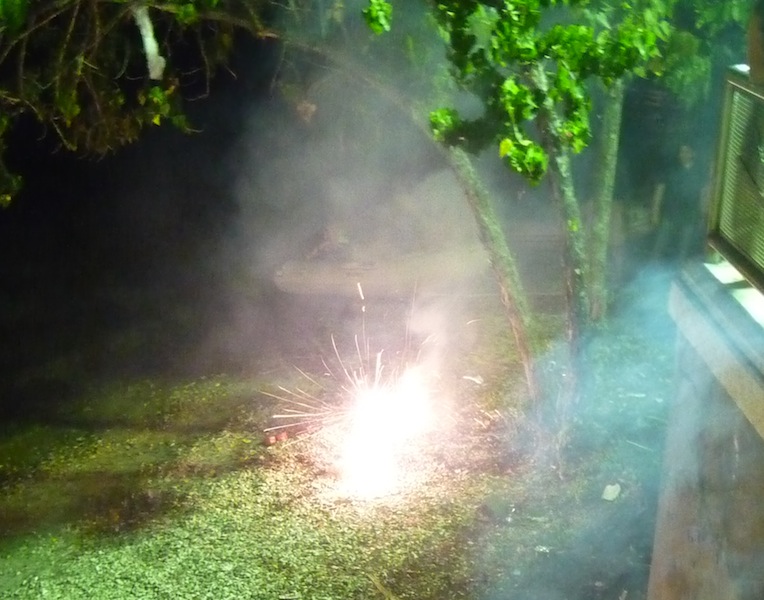 …and fireworks! LOTS of fireworks, all being set off in a spontaneous and utterly unregulated manner… such that innocent cruising persons and their families (i.e., yours truly) must run a gauntlet of explosions and simulated automatic weapons fire to reach their poor smoldering dinghy (yes, that’s our new Apex inflatable tender you can barely see lurking just behind that incendiary inferno on the strand there) and the putative safety of the mothership after a celebratory night on the town…

Gads! It is a miracle we escaped with our lives.

And it was, I must say, the culmination of a most successful holiday cruise.

I had visited Culebra once before, at the end of a long one-way charter from Tortola to Fajardo some 13 years ago, and have remembered the island fondly. These memories, in part, are what prompted me to base Lunacy in Fajardo this winter. That and the ease and low cost of flying in and out of San Juan.

Yet another advantage: close proximity to the rain forest, El Yunque, a great place to regale children with unfiltered nature prior to setting sail. 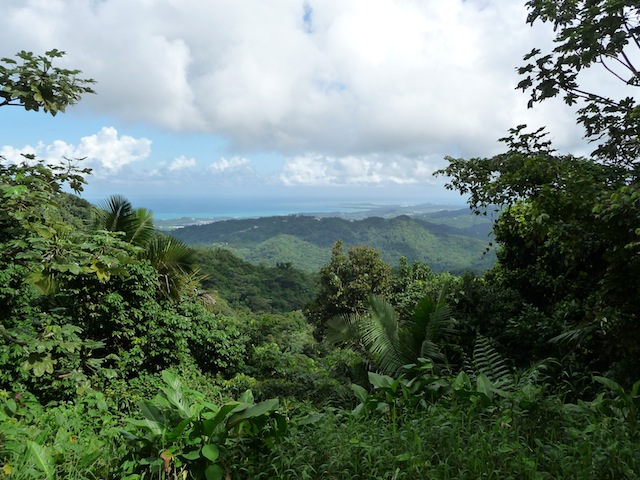 A view to the east from inside the forest. Culebra is lost in the blur on the horizon 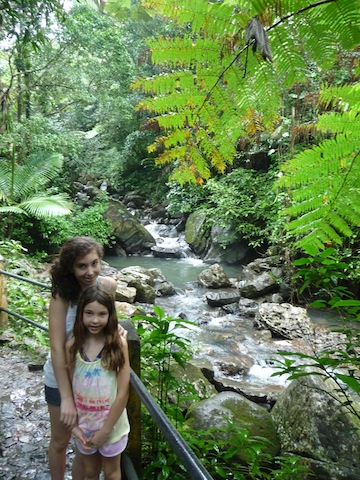 Una and Lucy on the forest trail 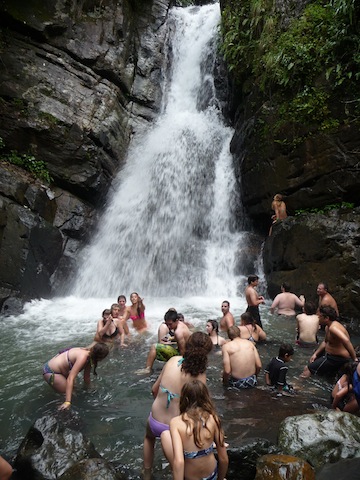 Swimming with the hordes at La Mina falls

I remembered Culebra as being very undeveloped, a glimpse of what the rest of the Virgin Islands might have been like 30 years ago before the bareboating hordes descended en masse. And it is still like that… a little more developed than before, of course, but not egregiously so, and still much quieter and more laid back than places like St. Thomas, which lies but one island to the east. 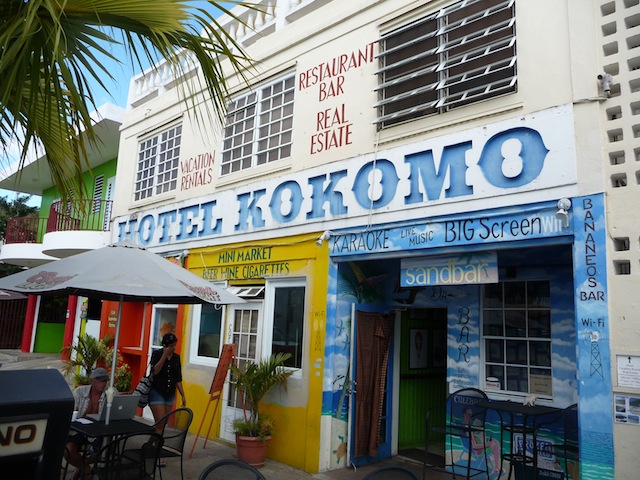 One-stop shopping at the Hotel Kokomo in downtown Dewey. I’ll have a pina colada and a shotgun shack to go, please! 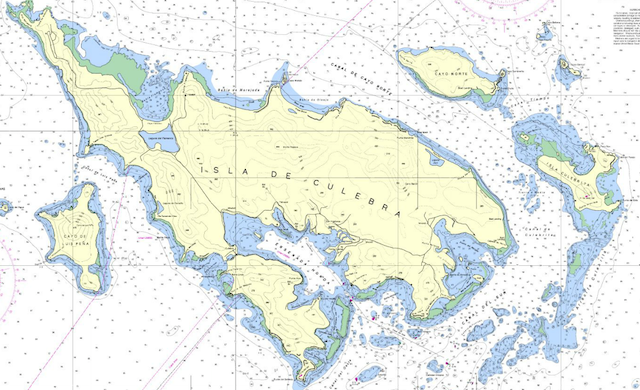 The lay of the land. Lots of beaches and reefs to explore in one compact cruising ground less than 20 miles east of Fajardo

What I hadn’t counted on (issue one dope-slap here) was the simple fact of the holiday season. Not only was the rain forest much more crowded than I expected, but various anchorages I remembered as being quite secluded were in fact full of boats. Not bareboats or fancy private yachts, as you’d expect to find in the BVI or around St. Martin and St. Bart’s, but powerboats of all description packed with partying Puerto Ricans. 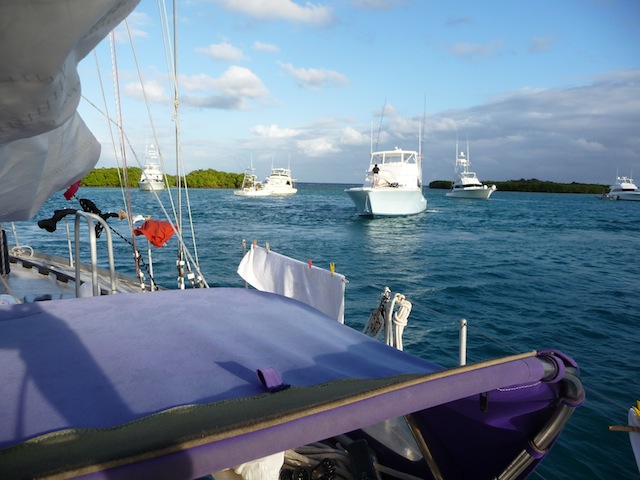 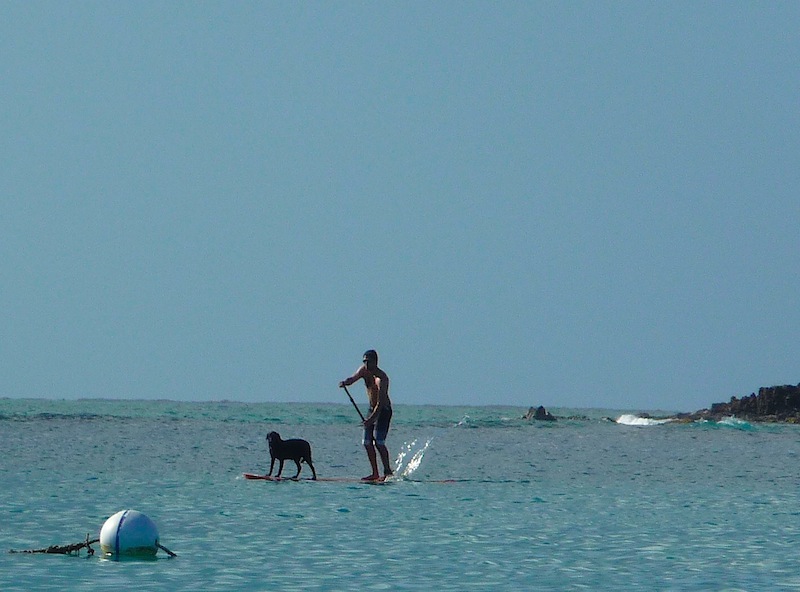 Man with dog on paddle board. A common sight in these waters

We could hardly complain, seeing as how we were there for the holidays ourselves. And in fact it warmed my heart to see that boats (even if they didn’t have sails) are such a big part of the local recreational culture.

The big breakthrough on Lunacy this year was the Promulgation of Snorkeling. I have been pestering the girls for ages to try putting on a mask so they can see what lies beneath the water’s surface, but they have always resisted. This time Lucy spotted a mask and a snorkel in a small store in Dewey, insisted on having it, and soon was wearing it all the time, both above and below the waterline. 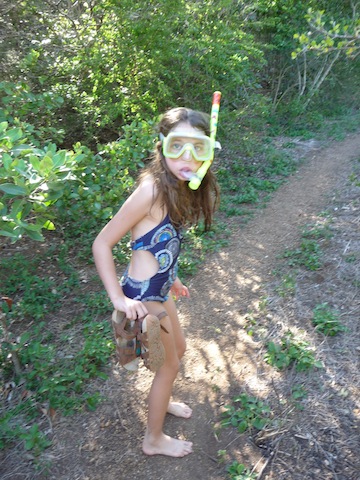 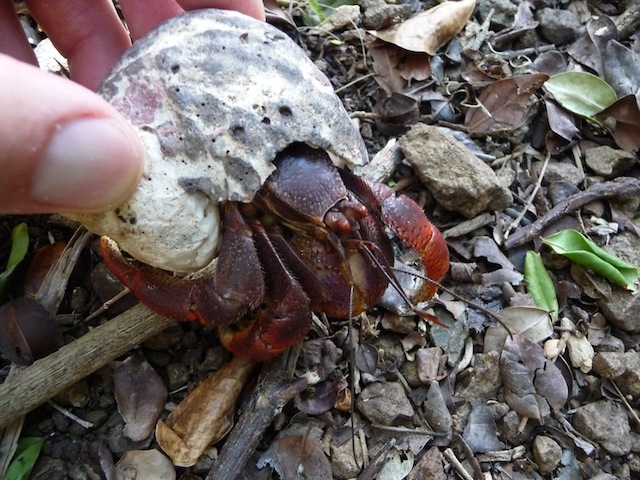 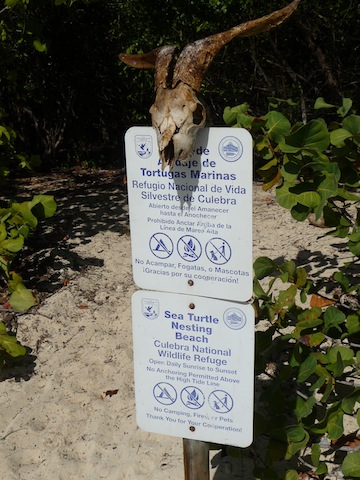 Below the water, or on the beach, you just might spot a turtle or two

Once she saw Lucy was enjoying herself, Una had to try, too, and soon, at long last, I had a pair of eager acolytes swimming along behind me on my submarine explorations. 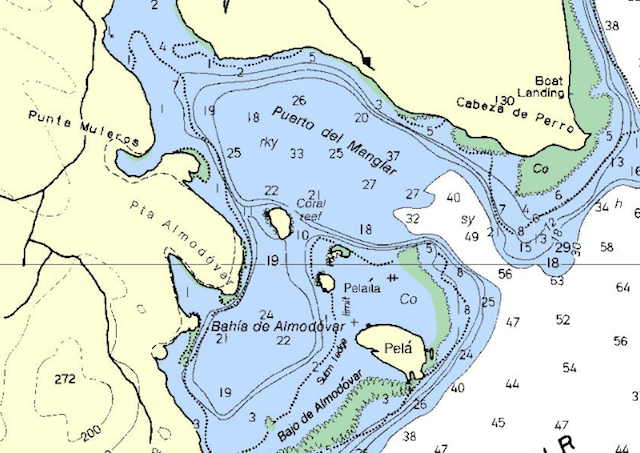 Lucy and I explored the Bajo de Almodovar south of Manglar Bay. 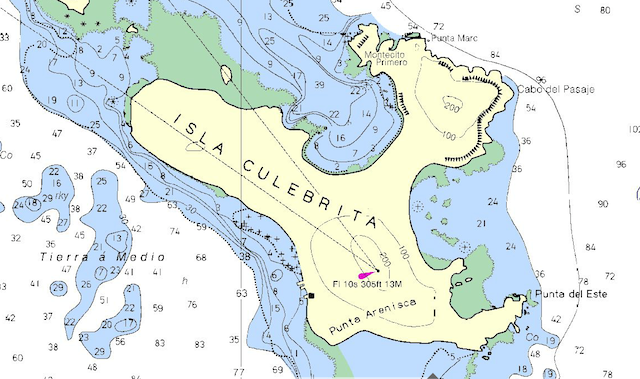 Una got into things and joined us for a snorkel on the beachside reef on the west shore of Culebrita. 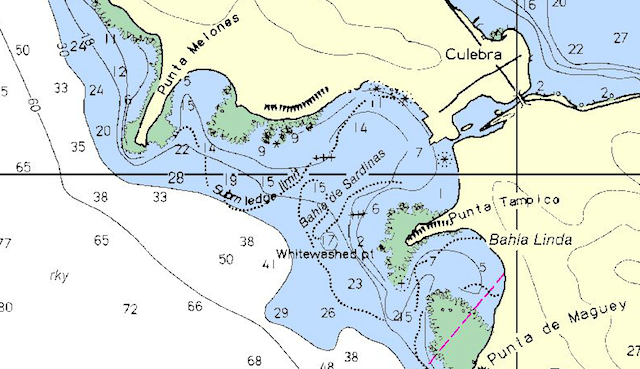 And the best spot we found was just west of the root of Punta Melones outside of Dewey (denoted simply as “Culebra” on nautical charts). Here we saw lots of live coral, including many sea fans, a forest of sea urchins, a big old ray, and lots and lots of fishies!

We spent New Year’s Eve anchored in Bahia de Sardinas, just east of Punta Melones, and it was here we ran the fireworks gauntlet during the countdown to 2013. You can also anchor east of town inside Ensenada Honda, which is the island’s primary harbor.

NAVIGATION NOTE: The one downside to cruising Culebra from Fajardo is that the courses you run tend to be either straight upwind or downwind. Sailing with a family crew this translated in our case to a lot of motorsailing or sailing off the wind with just a headsail up. 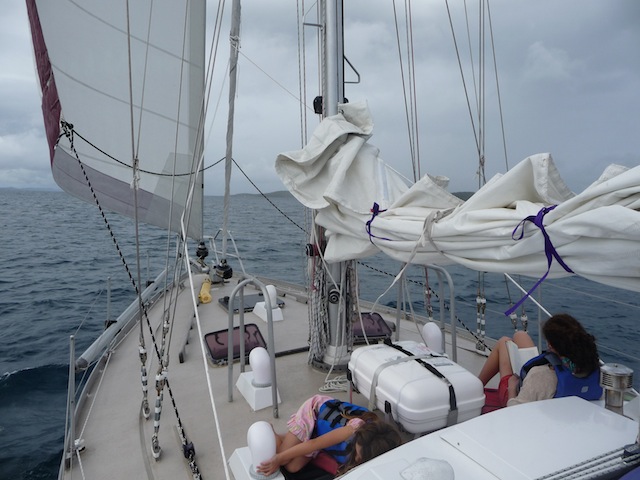 Also, I found a glaring error on my chartplotter (below) and on the NOAA paper chart (see above) re the islets separating Bahia de Almodovar from the main body of Manglar Bay (a.k.a. Puerto del Manglar). 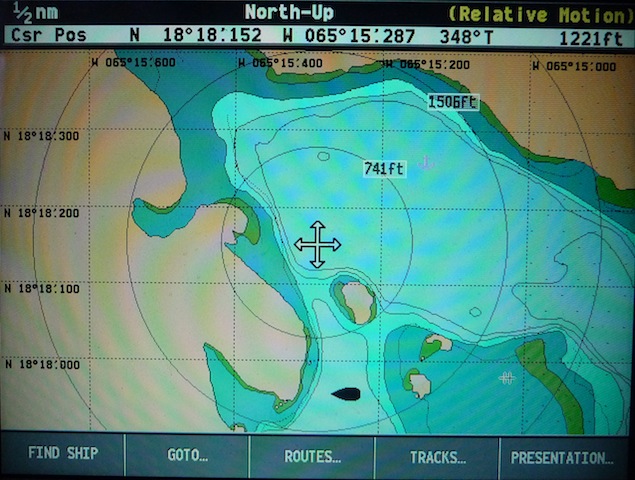 The islet you see on the plotter screen just below and to the right of the cursor is in fact a shoal and does not protrude above the water.

TECHNICAL NOTE: My Ultrasonic Antifouling system and my Ultima Eco paint are not faring well down in the tropics. After little more than a month tied to a dock in Fajardo, Lunacy‘s bottom was festooned with carpets of tubeworms. They scraped off easily enough, but I’m now scratching my head over how best to keep the bottom clean through the rest of the winter.

TRAVEL NOTE: If you want to try cruising Culebra yourself, you need not sail your own boat all the way down there like I did. There is a charter outfit based at the Puerto Del Rey marina in Fajardo called Sail Caribe that has a small fleet a very spiffy looking Lagoon catamarans and Hunter monohulls. They also have a base on Tortola, so you can arrange a one-way charter if you like. 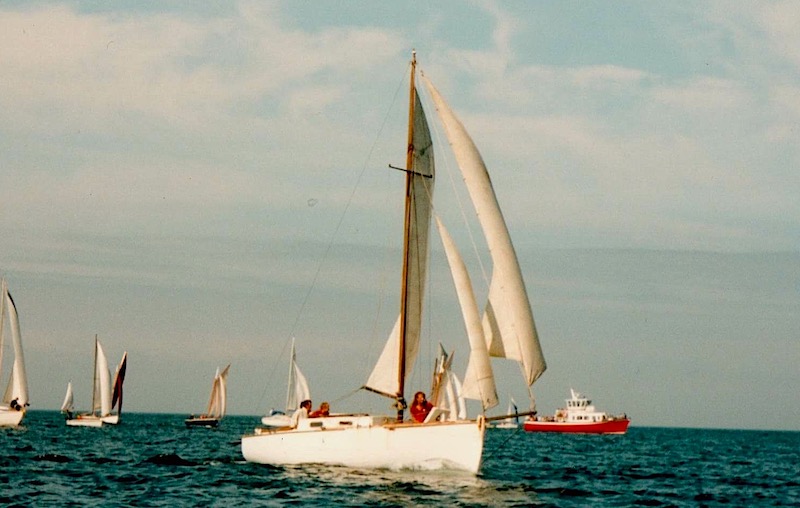 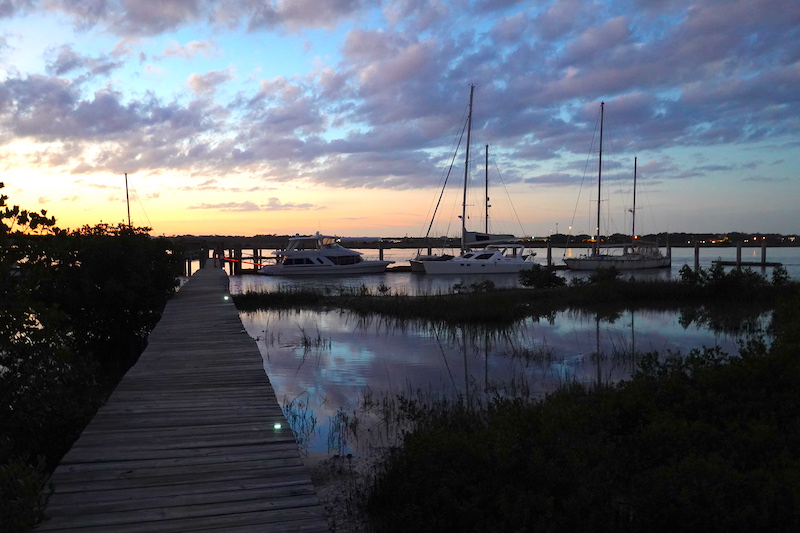