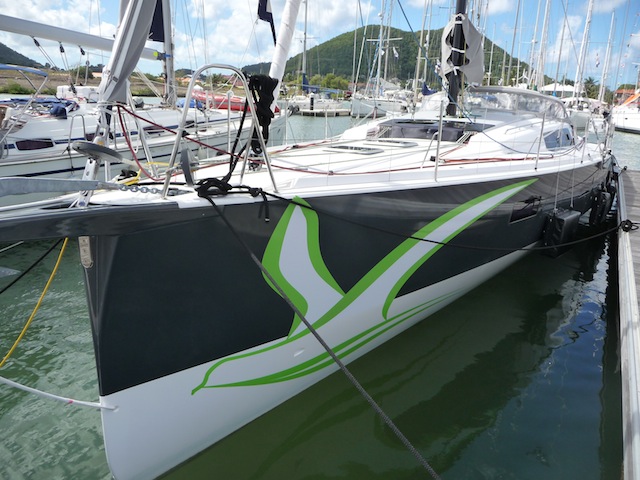 I’m on the ARC beat in St. Lucia again this week, chilling with my SAILfeed compadres Andy Schell and Mia Karlsson and stalking the pontoons checking out all the peeps and boats that coagulate here in Rodney Bay as the world’s biggest bluewater cruising rally comes to an end. It was a rougher ride than usual through the trades from the Canaries to the W’Indies this year, but spirits are high and the energy, as always, is very positive.

I got here a bit late in the game, so missed some of the fastest boats. These included a sweet high-end performance cruiser, a Pogo 50 named Surfing Petrel (see photo up top), that immediately caught my eye. As in: the boat was still here, but the crew was gone, so I couldn’t pester them for a nickel tour. 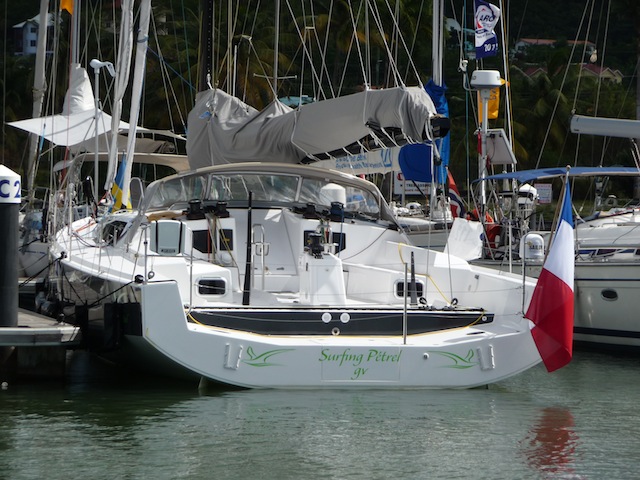 As you can see, she’s got an extremely wide transom and some hard chines in her hull, in the current go-fast style, and is steered with tillers turning twin rudders. She also has a lifting keel (draft varies from 1.5 to 3.5 meters) and a sexy carbon rig. 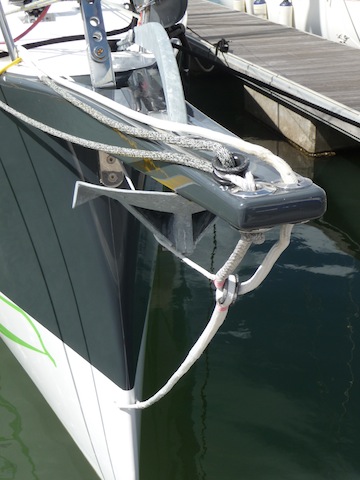 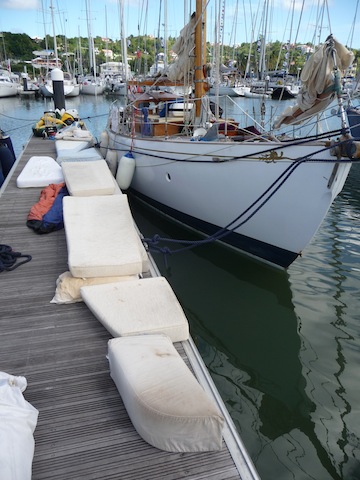 Way over on the other end of the spectrum, I also quickly zoomed in on one of the oldest boats in the fleet, Peregrine, a 39-foot Fife one-off built entirely out of teak in Scotland in 1936. As is traditional with plank-on-frame wood boats, she got a bit soggy inside during her 21-day passage and needed a thorough airing out on arrival here. 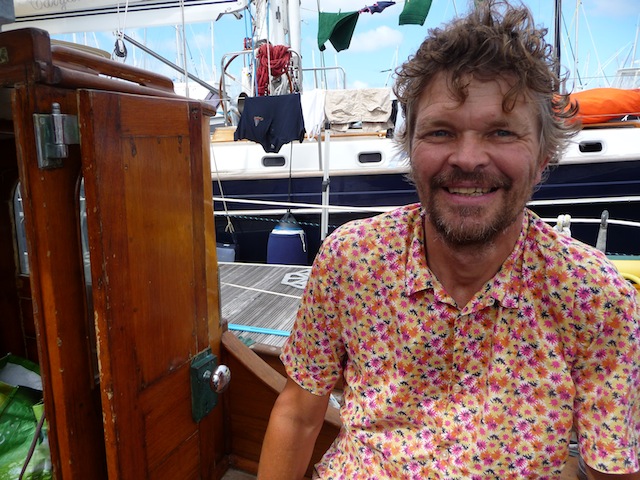 Her owner, Peter Brownsell, and his three crew handsteered most of the way across the Atlantic, as their Monitor windvane failed not long after they left Las Palmas de Gran Canaria. Good on ’em, I say. 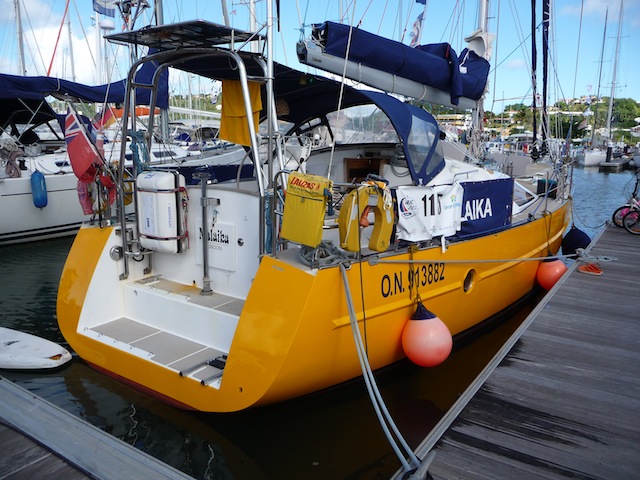 Malaika, British-flagged, Polish-owned, with a Big Yellow Taxi paint job, is a heavy-duty steel cruiser designed to get frozen into ice in very high latitudes. Doubled up on all systems and way over-equipped, I’d say, to spend a season down here. 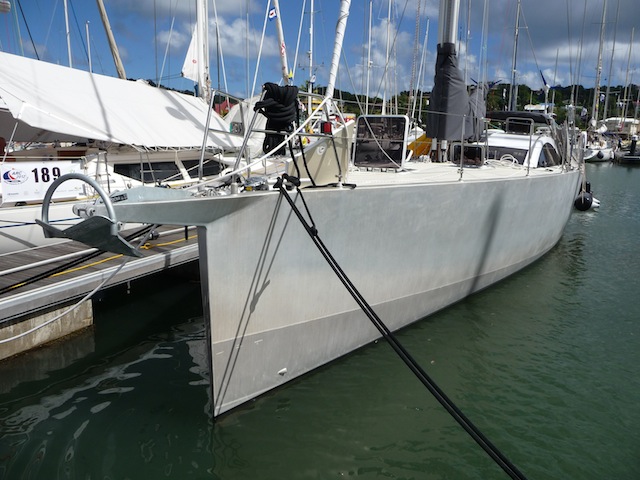 Another metal job, attractive to my eye, of course, because it’s unfinished aluminum, like my baby Lunacy. A German Yachtbau 48 whose owner, alas, was not at all forthcoming. Perhaps because he lost his headstay, which if you look carefully you’ll see lying on the finger dock behind the boat. The cockpit, I noticed, is all finished in cork. Very exotic! 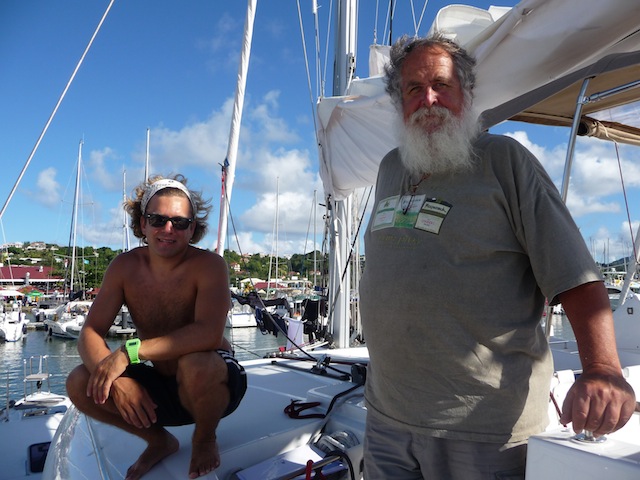 These folks, meanwhile, are very friendly. Brian Fitzpatrick, on the right, is a California vintner who just bought a Lagoon 450 in France–he calls her INNcredible Sea Lodge–and is sailing her back to the West Coast. 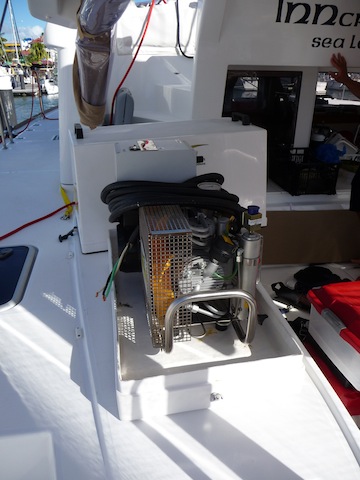 He and his first mate were working on get this air compressor installed so they can jam some bottles and do some diving while transiting the Caribbean. 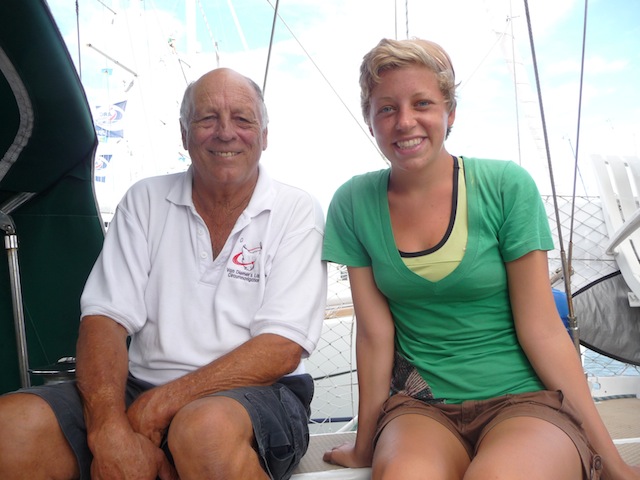 More friendly people, Michael (left) and Capers (right), who are sailing on another aluminum boat, Drina, a Metalu Jade 38 ketch, that Peter, age 70, from Australia, has been sailing all over everywhere for decades now. He sailed her in the second ARC, in 1987, and thought he’d join again this year. Not that he needs any hand-holding. “It’s a great way to meet nice people,” he told me. 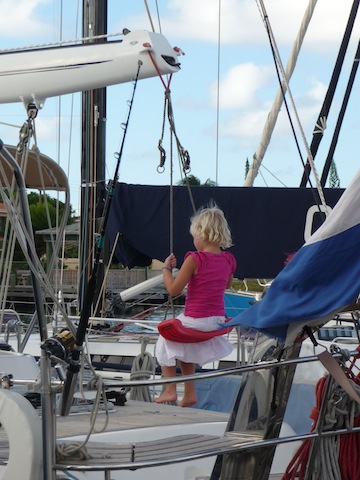 Random small child seen swinging from the end of a boom. She ran off and hid inside her boat as soon as she noticed me taking pix of her. 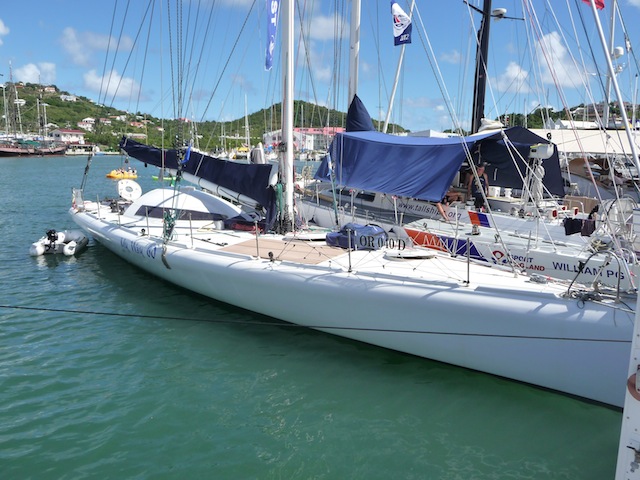 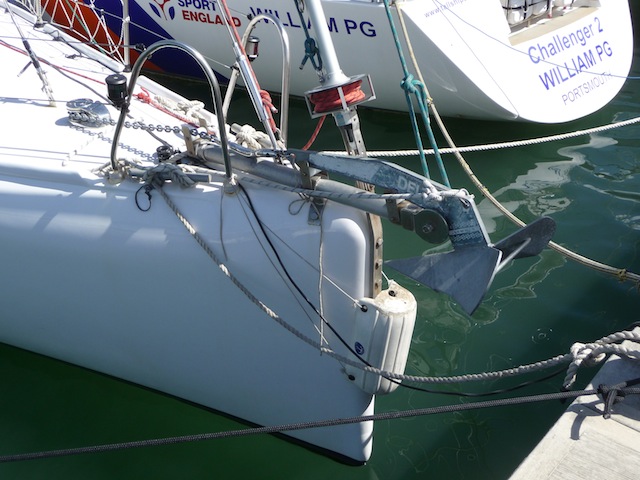 Check out the retrofitted bow roller. Looks a little sketchy, if you ask me. Though I assume they take the anchor off the bow while at sea. 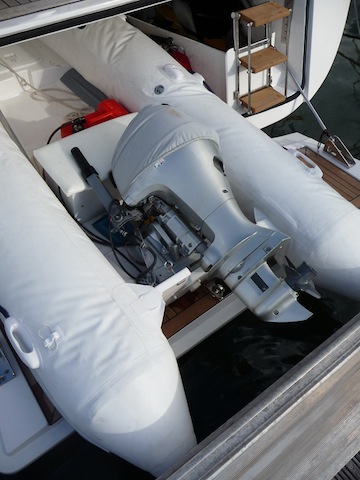 This dinghy, seen on a very large Swan named Katherine, Aussie-flagged, has the center part of its transom cut out and mounted on hinges, so the outboard engine can be folded flat when the tender is stored in the transom garage. Very clever! 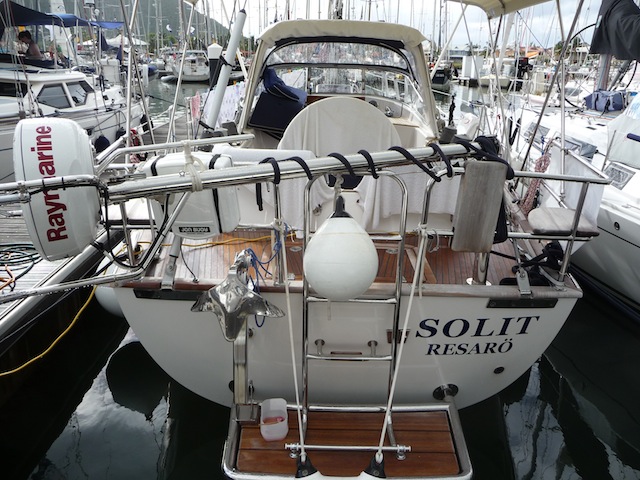 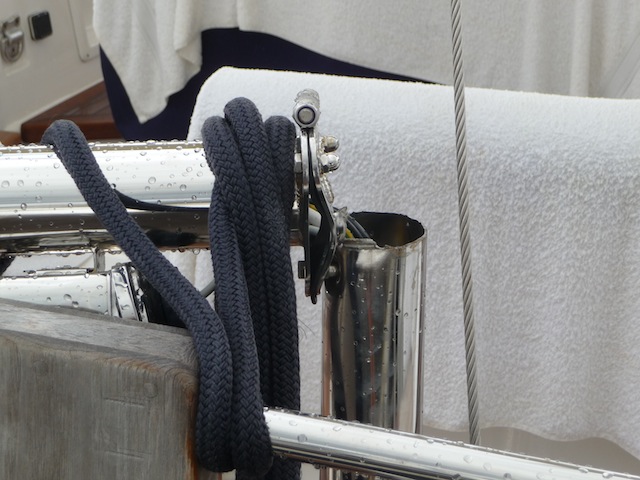 Fancy radar post that wilted. Note in the close-up photo how it broke immediately below the hinge that (ironically) allows it to fold down in the other direction. 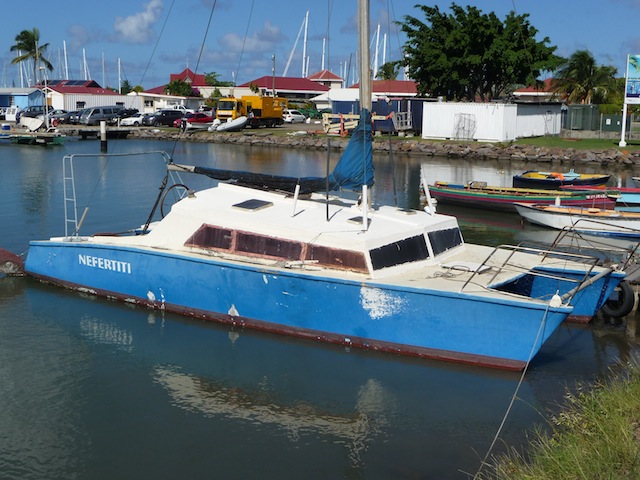 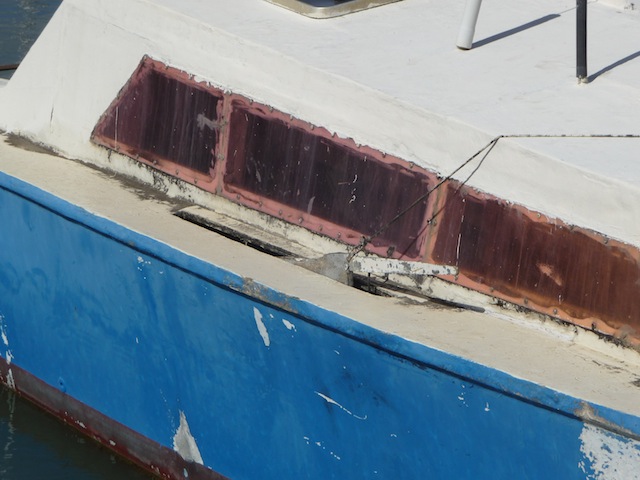 Not an ARC boat, but a Pleistocene proto-catamaran found languishing by the shore just outside the marina. It’s got all the features–kick-up rudders, wheel steering, and centerboards with levers. 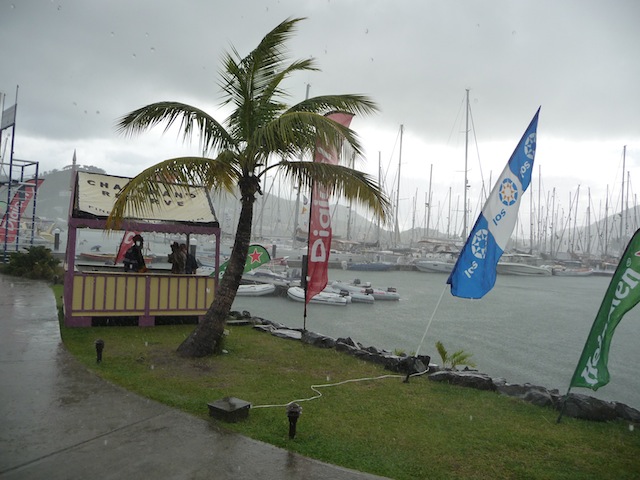 Rain squall that swept through not long before I somehow lost my notebook. @&!# Gotta find that sucker, or I’ll have to put a freakin’ cap in my head.