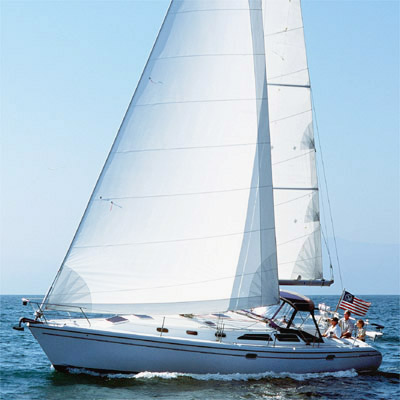 The Catalina 42 was introduced in 1989 and was one of the first mass-produced American boats to feature both a sugar-scoop transom with a swim platform and a three-stateroom layout with two aft cabins under the cockpit. It was very much a response to similar boats that first appeared in Europe in the mid-1980s, but unlike its contemporaries it stayed in production for over 20 years. Over 1,000 were built, making it one of the most successful cruising sailboats of its size ever created.

Boats like this have long dominated the mass-production market, but what distinguishes the Catalina 42 from more modern boats is its moderation. Where many contemporary mass-production boats now have rather exaggerated shapes to maximize interior volume, the Catalina 42 has a much more balanced form. Its bow is well raked and has a clean entry, but its waterline is not too short. Its beam is carried well aft, but not excessively so, and tapers quite a bit at the transom, so the boat does not gripe too much sailing hard to windward. Freeboard is not too high, the coachroof lines are crisp, and the boat has very clean, handsome profile.

Performance under sail is crisp but amiable. The Catalina 42’s original hull was based on an old Nelson Merek racing design, and the boat is just fast enough and closewinded enough to win club races if appropriately handicapped (a PHRF rating of 105 is typical. It is relatively stiff–-it normally doesn’t heel much past 15 degrees–and can be pressed hard if you like. Loafing along in cruising mode, the boat trims out quite nicely and doesn’t need a lot of fiddling to keep moving well. During a month I once spent skippering a Catalina 42 in the West Indies in moderate tradewind conditions, I found I didn’t have to work hard to keep the boat sailing around 7 knots. 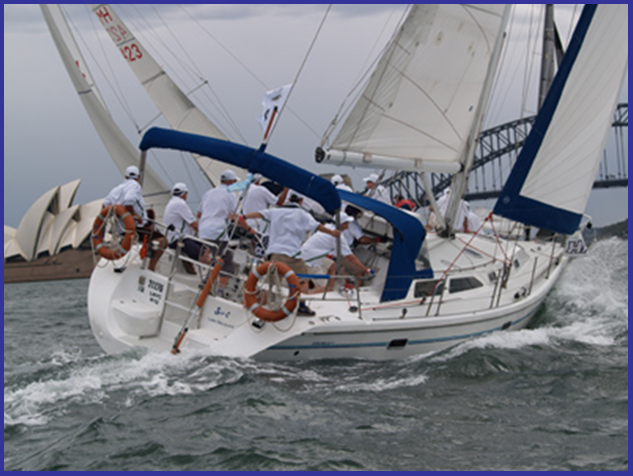 Many Catalina 42 owners have raced their boats hard. Here’s one sprinting round the buoys in Sydney Harbor

There were two keels available–a shoal-draft (4’10”) wing keel and a deeper (6’8″) straight fin keel–and the deeper one, of course, helps the boat point and track better. There are also two different rudders, both installed behind shallow partial skegs. On earlier Mark I boats (477 were built between 1989 and 1995) the rudder is rather short, and on the later Mark II boats it was replaced with a deeper, more elliptical foil that improves handling. On some Mark I boats the deeper rudder has been retrofitted.

Aside from the rudder, the only real difference between the two versions of the boat is that the Mark II has a rounder transom and more cockpit storage, plus a fixed, rather than collapsible, cockpit table. Otherwise, the cockpit on both boats is quite roomy and comfortable with 6’8″ long seats that are great for stretching out on. The one drawback to the large cockpit is that the mid-boom mainsheet is led to the coachroof and cannot be reached by the helmsman. Without an effective autopilot, it is therefore not easy to singlehand this boat, though it is quite easy to sail doublehanded. 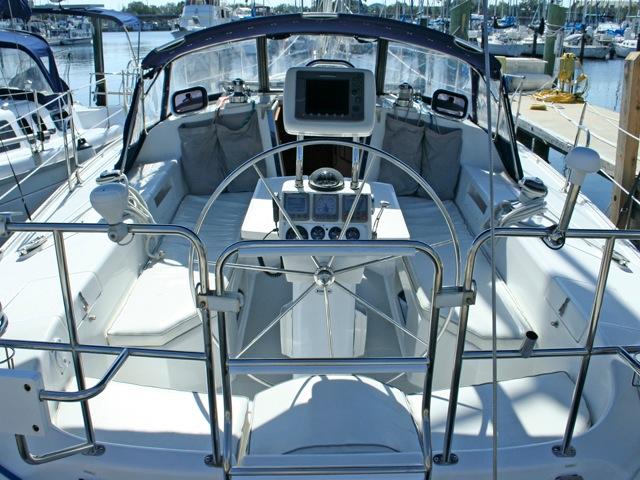 Example of a cockpit on a more recent Catalina 42

The Catalina 42 was very much a mass-produced boat and was constructed accordingly. The hulls are solid hand-laid fiberglass and though there have been some reports of blisters, both before and after Catalina started applying vinylester barrier coats in 1995, most blistered hulls were repaired at Catalina’s expense. The hull is stiffened with a large molded fiberglass liner/pan that incorporates furniture foundations as well as the cabin sole. The liner, as on many mass-produced boats, does limit interior access to the hull. Also some storage compartments are not segregated from the space behind the liner, so gear can get lost back there if you’re not careful.

The deck is balsa-cored with plywood substituted in places where deck hardware is installed; the deck joint is of the shoebox type, bonded with adhesive sealant and through-bolted with stainless-steel fasteners on 8-inch centers. Quality overall is good compared to most other mass-produced boats. Though it was designed primarily for coastal cruising, several Catalina 42s have been used for bluewater cruising in tropical and middle latitudes. On many of these bluewater boats, aside from the usual systems upgrades, the only significant modifications have been the addition of extra fuel tanks and handholds below.

There are three different accommodations plans. The original three-stateroom layout, the only one installed in the first 238 hulls, can comfortably sleep three couples (or a couple and a large bunch of kids who don’t mind sharing double berths) for a reasonably long period of time. During my month-long West Indian cruise I shared this layout with five other people. We were a bit pressed for storage space, but we were definitely happy campers. Bulkier, more modern three-stateroom boats in this size range may offer the illusion of more space, but in practice it usually doesn’t amount to anything terribly useful. 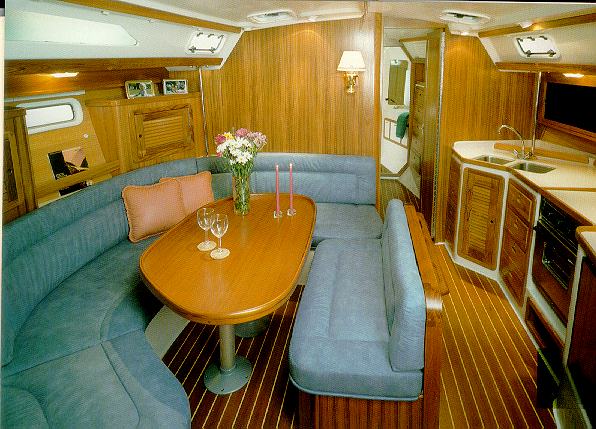 The saloon looking forward on a three-cabin boat 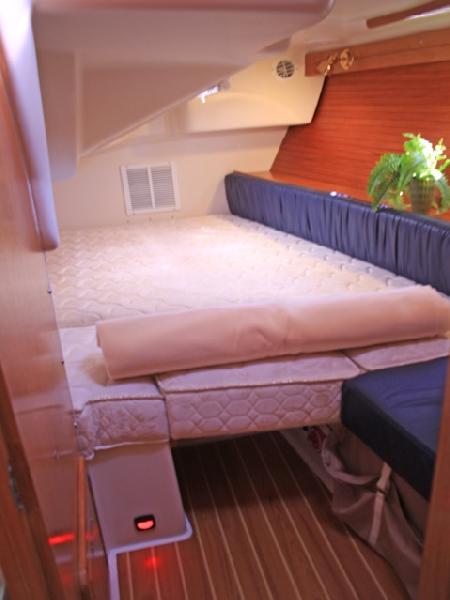 There are also two two-stateroom plans, one with a Pullman double berth forward (as in the three-stateroom layout), the other with a centerline island double. To my mind, the Pullman layout is superior. It affords more storage space and a larger forward head with a separate shower stall, plus the berth itself is a bit farther aft and can be fit more easily with a leecloth, thus is more likely to be habitable in a seaway. The biggest advantage of the two-stateroom layout, regardless of which forward stateroom you prefer, is the super-sized galley aft with a cavernous pantry space that is great for systems installations and serious gear storage. 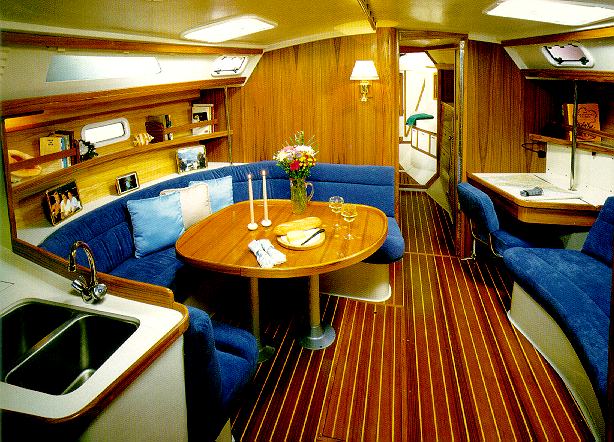 The saloon looking forward on a two-cabin boat 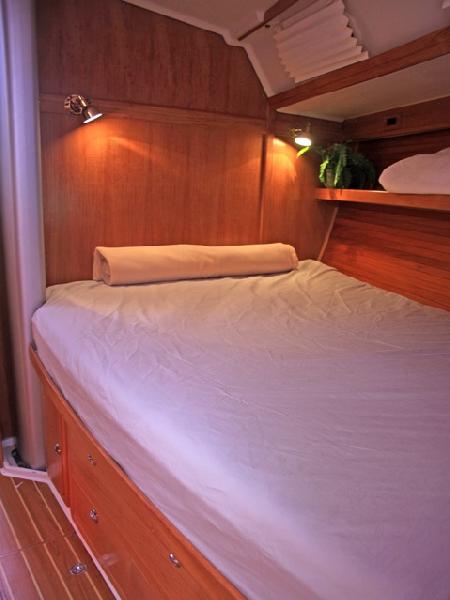 Pullman berth in the forward cabin

Gerry Douglas, Catalina’s inhouse design maven, considers the Catalina 42 one of his better efforts, and I’m inclined to agree with him. It is one of the best cruising sailboats of its type ever produced in North America and represents an excellent value. The youngest examples compare well to current models and sell at a premium. Older examples are very attractively priced and make great project boats, both because the 42 offers a reasonably sound foundation on which to build and because Catalina, unlike many builders, works hard to support owners of older boats. 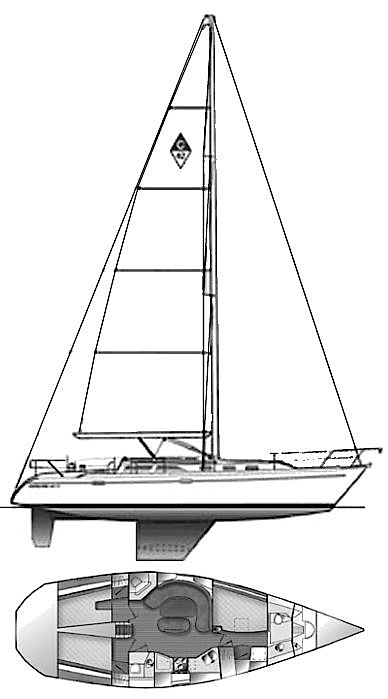 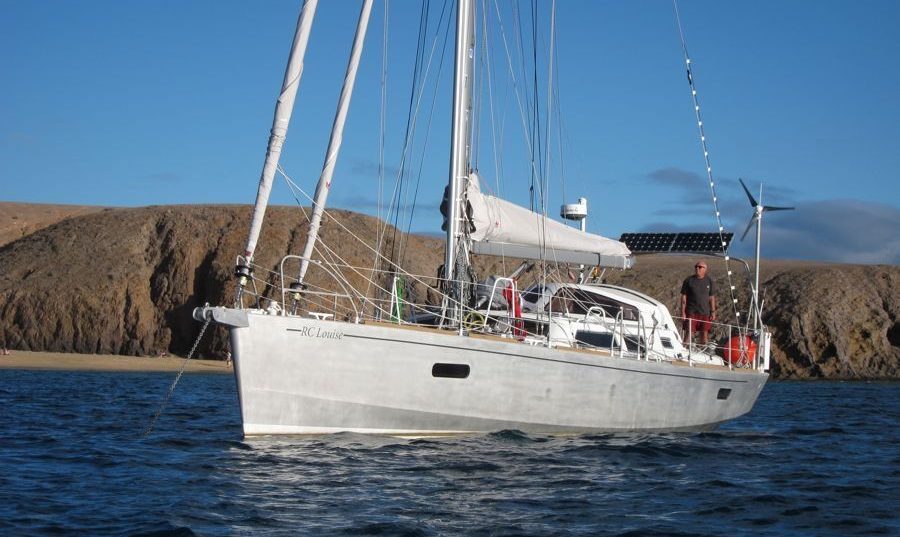 USED BOREAL 44 FOR SALE: RC Louise Is Up For Grabs!