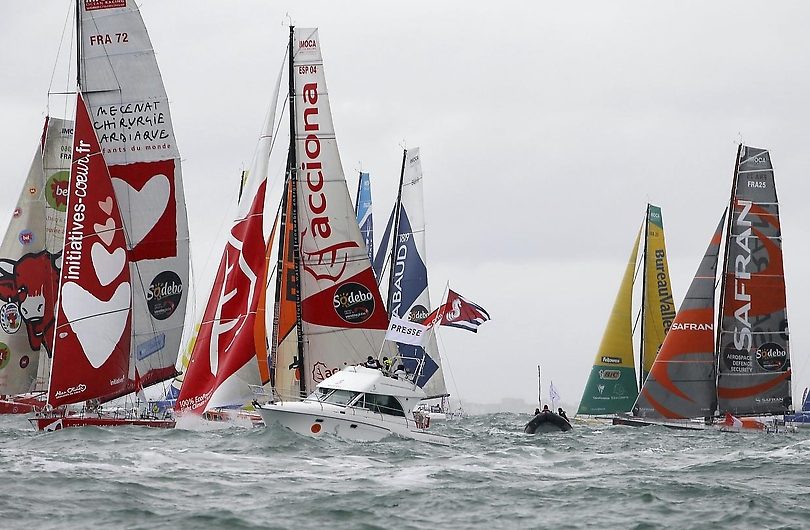 I’m just catching up with the latest edition of the Vendee Globe, which started 10 days ago from Les Sables D’Olonne (see photo up top) while I was offshore sailing Lunacy to Puerto Rico. I wasn’t too surprised to find that several boats (5 of the 20 that started, or 25 percent of the fleet) almost immediately had to quit because of damage they suffered, as this seems to be Standard Operating Procedure in round-the-world races these days. But I was a bit chagrined to see that two of the five casualties were due to collisions with fishing boats and that nine different boats (i.e., almost half the fleet!) are under protest for violating the traffic-separation scheme off Spain’s Cape Finisterre.

It’s one thing to run a top-flight cutting-edge sailboat race in which some vessels prove too fragile to finish the course. It’s quite another to have people sailing boats like this as though they were bumper cars.

That the actual collisions that took place were with fishing vessels is, of course, entirely understandable. The two most obstinate actors in any potential traffic conflict, I’ve always found, are fishermen and racing sailors, as both seem to believe their respective missions are sacrosanct. I can easily imagine them standing on deck shaking their fists at each other.

“You must yield! I am fishing! I do this for a living!”

“No, you must yield! I am racing for the honor of France!” 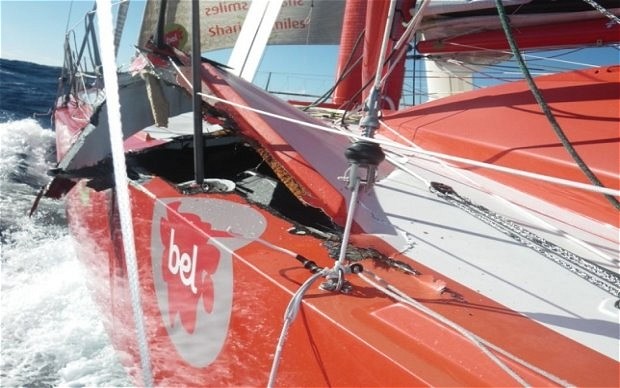 Collision damage on Kito de Pavant’s Groupe Bel. Louis Burton on Bureau Vallee also collided with a fishing boat and was forced to withdraw from the race

What’s truly remarkable is that so many of these Vendee Globe competitors seem to think that rules do not apply to them. Even though they are required by the racing rules to respect the Finisterre separation scheme, and were specifically warned prior to the race to follow the rule, and have transponders onboard so everyone can see whether or not they are following the rule, a plurality of skippers went ahead and just ignored it anyway. As I write a protest committee is pondering what to do about this. If it were me, I’d disqualify the suckers, just to make a point, but I doubt they’ll be that harsh. 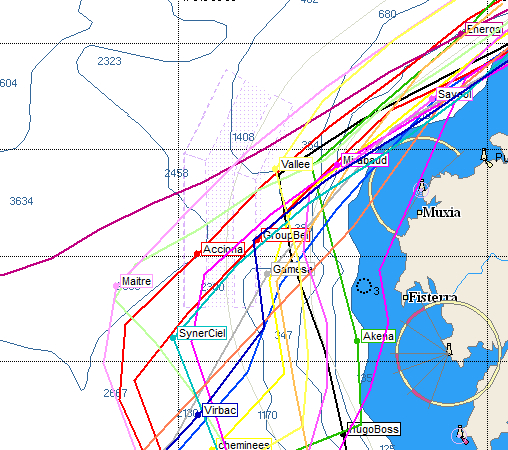 The sailors that are out that didn’t hit fishing boats have fallen prey to more common ailments–one broken mast and two broken keels. As a mere spectator, I have to say I don’t mind this at all. In fact, I think it’s exciting when boats break, as long as no one gets hurt and I don’t have to pay for the repairs. If I were a sponsor, however, I’d think this world-class sailboat racing game was a swindle. To spend millions on a marketing campaign that’s supposed to go on for several weeks, only to have it crash and burn on day one due to some technical difficulty must be galling. 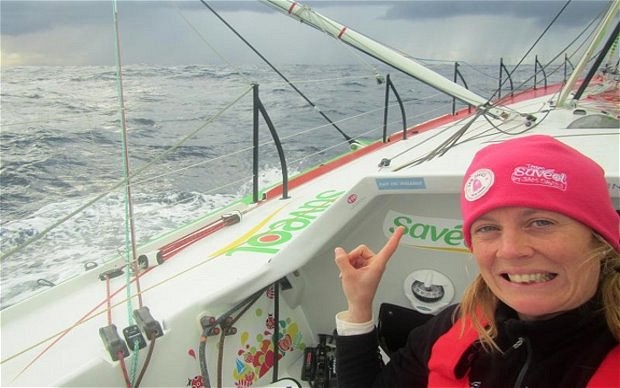 Sam Davies aboard Saveol points to where her mast used to be. She lost her rig just six days into the race

I’m relieved at least to see that my favorite Vendee sailor, my old acquaintance Alessandro di Benedetto aboard Team Plastique, hasn’t crashed or broken any rules yet. 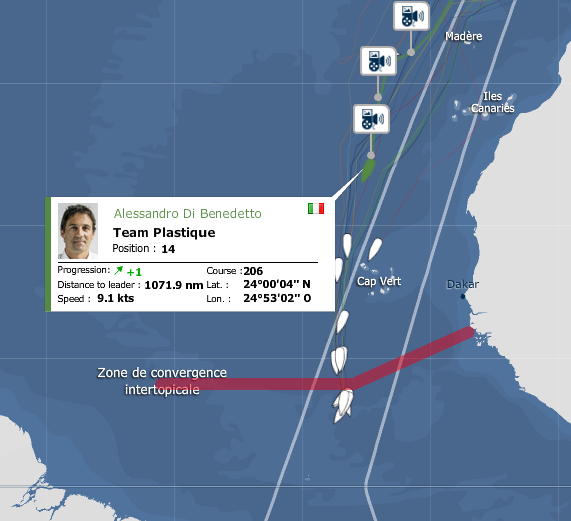 Of course, he is now running in second-to-last place and doesn’t stand a chance of getting anywhere near the podium (unless a lot more boats crash and burn), but that really isn’t what the Vendee Globe is all about. Just getting to the finish line intact is a huge victory in itself.

For the record, here are the lists of casualties and miscreants. You’ll note they overlap to some extent.

Also, I’d like to take issue with my SAILfeed colleague, the mysterious Mariner, who yesterday hailed Alex Thomson for his rudder repair on Hugo Boss in the current race and awarded Yves Parlier the “all-time MacGyver award” for jury-rigging his mast in the 2000-2001 Vendee Globe.

Au contraire, I would assert that the all-time Bubble Gum and Rubber Band Award (as I prefer to call it) should go to Michel Desjoyeaux, who won the 2000 race after figuring out how to use his mainsail to pull-start his engine.

You can check it out in this here video: