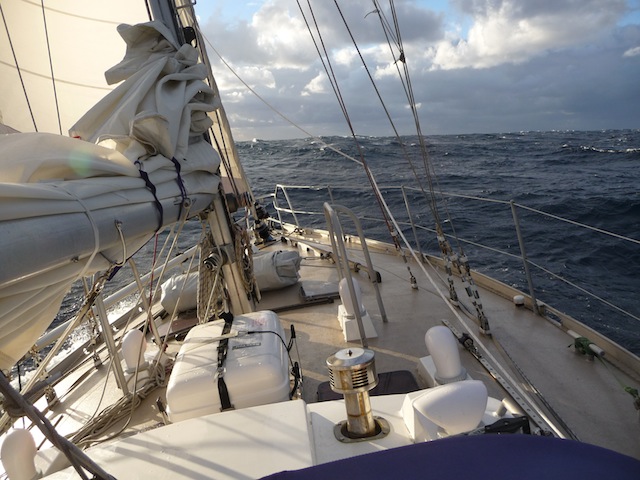 HAVING SUFFERED NO DAMAGE while lying in port during Superstorm Sandy, Lunacy at last departed New Hampshire at 1000 hours last Thursday. Aboard with me were two pick-up crew enlisted through Offshore Passage Opportunities: Minnie Burke, 23, a young adventuress from Virginia, and Chris Salas, 41, a doctor from Rhode Island. Neither had much, if any, offshore sailing experience, and I was careful not to sugarcoat our prospects. I told them what I tell anyone who proposes to sail from New England to Bermuda in the fall: this is normally a difficult passage; you will be sailing in winds over 30 knots; you will be uncomfortable.

I was as good as my word. Indeed, I was thrice as good.

Crossing the Gulf Stream is the key element of this passage. The trick isn’t to wait for a weather window big enough to see you all the way to Bermuda, for this time of year, what with late tropical storms chasing early nor’easters on into winter, you most likely will never see one. What you’re looking for is enough of a window to get across the Stream without any strong easterly wind cutting against it. In the most common scenario, you depart New England with strong northwesterly wind after the passing of a cold front, ride this across the Stream on a fast, but bumpy broad reach, then hopefully have something more moderate to see you the rest of the way to Bermuda. In the Stream you may see fierce squalls, but they’ll be moving with the Stream, rather than against it, and though life may be miserable for a bit, your misery should be short-lived.

Aboard Lunacy this year, we had the northwesterlies for sure. A moderate southwest breeze carried us first from New Hampshire down past Cape Cod, and then we had no breeze and had to motor 9 hours to get out through the Great South Channel. Then just at nightfall on Friday, as though a switch had been flicked on, the northwest wind was upon us.

What lay in front of us was a huge double-loop meander in the Gulf Stream. 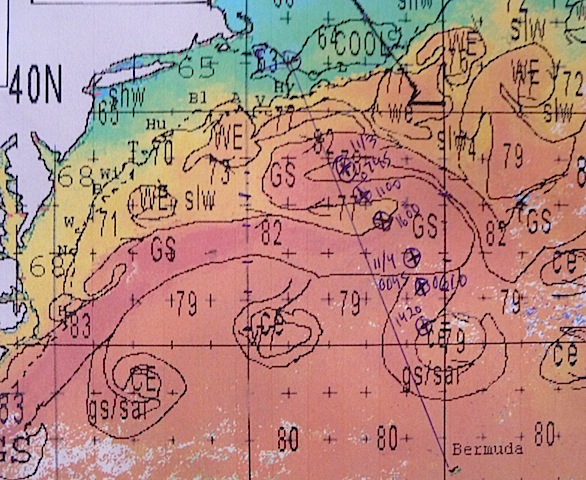 Our route across the Gulf Stream. Imagery courtesy of Jenifer Clark

Had we left from Newport (the original plan, prior to Sandy) we might easily have avoided this. Coming out of Great South Channel, however, sailing around the meander would have involved an enormous detour west. In the end, per the advice of my weather router, Ken McKinley of Locus Weather, I concluded a rhumb-line route straight through the mess was the only reasonable option.

This meant we had to cross the main body of the Stream three times to get to Bermuda. As you can see on the chart, a rhumb-line course effectively would have kept us in the Stream for about 180 miles. The northwest wind went west, however, and we got pushed east, as I wanted to keep the wind and the seas on our quarter as much as possible. Consequently, not counting the nice southbound cold-eddy current we got into after exiting the main body of the Stream, we were actually coping with the Stream for about 230 miles.

Wind speed was quite variable. In the lulls it was as low as 15 knots; in the frequent squalls we saw it was blasting well over 30. Most of the time it was in the low 20s. We carried just our headsail and made good speed, with spikes as high as 14 knots when surfing down waves.

The worst bit was crossing the middle section of the double loop, where the current of the Stream was flowing due west against the wind. Here the waves were ungodly–exceedingly large, steep, and irregular. The crew loved it. Chris was seasick; Minnie was unflappable. They both stood their watches without complaint and marveled at the beauty of the angry sea around us. 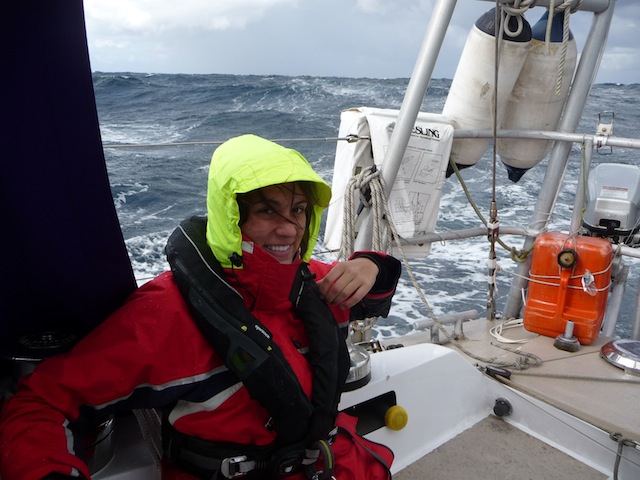 Minnie in her element 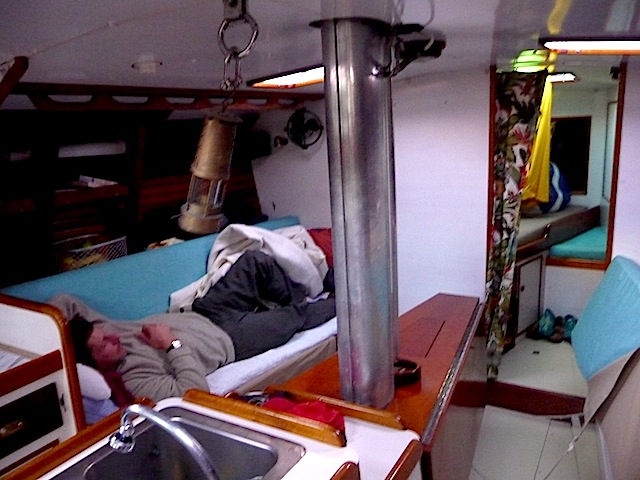 Over the years I’ve taken a number of inexperienced crew across the Gulf Stream in the fall. Some are terrified by what they see. Others are amazed. The latter are the ones most apt to come back for more.

Ultimately, I was very happy to have crew, as the only dicey bit of our passage came during the ugly part, when suddenly the newly installed chain hook for the windvane came loose and slipped down the tiller. While Minnie hand-steered down the wave fronts, I carefully worked on the chain hook with a screwdriver and socket wrench and re-secured it as the tiller sawed back and forth. Minnie did a great job keeping her steering corrections as small as possible, and we had the vane hooked up again in a matter of minutes. Had I been alone, I might well have ended up having to hand-steer the rest of the way to Bermuda. 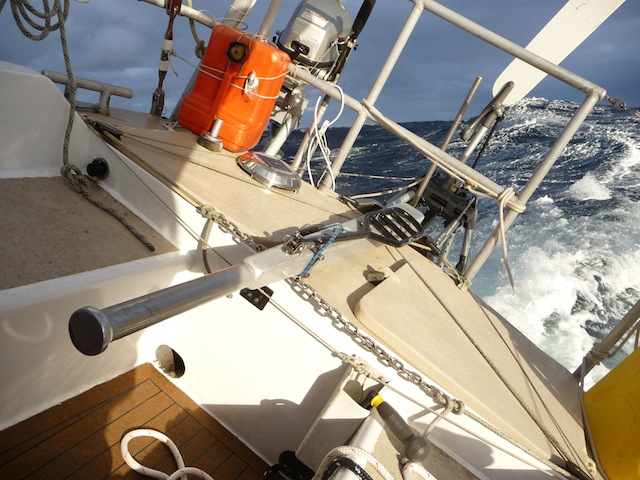 The windvane back in action with chain hook reinstalled 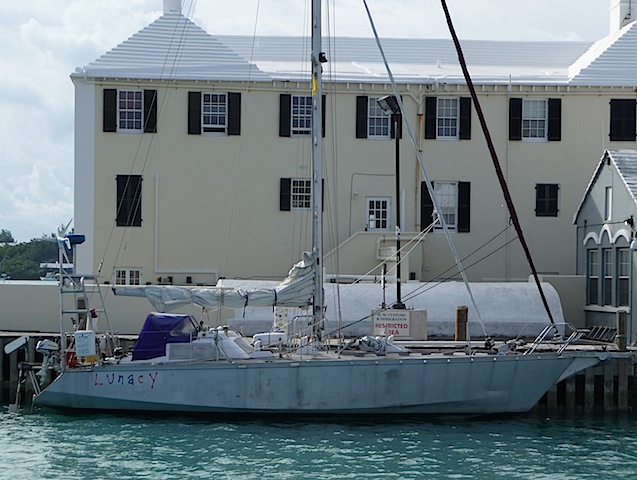 Final note: This was my first ocean passage on Lunacy with an AIS receiver aboard. What a joy!

Gone are the days of anxiously peering about, looking for lights, spending hours in the cockpit watching angles and bearings with binoculars in hand. Now I can see ship traffic 48 miles out, with its closest point of approach automatically calculated, and can hail a ship by name if there is any prospect of a conflict.

Such technology is, of course, dangerously convenient, and I am sure someday someone will contrive to kill themselves over-relying on it. See, e.g., the recent final U.S. Sailing report on the Aegean disaster in the last Newport-Ensenada Race. The awful verdict there–death by autopilot–is now official.

Special thanks to Ken McKinley and Jenifer Clark for their guidance on this passage. Next up is the leg to Puerto Rico. We should be away tomorrow or the day after at the latest.