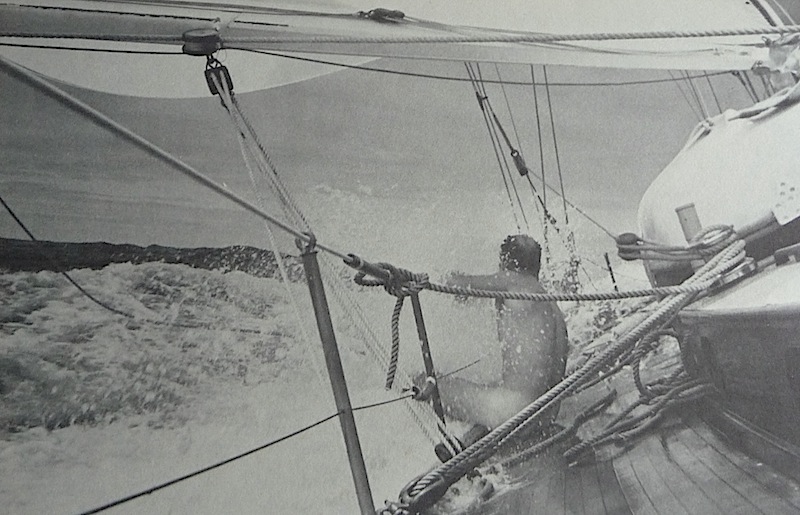 Big confession here: I have read little of Carleton Mitchell’s writing. I was always familiar, of course, with his enormous reputation–three consecutive Bermuda Race wins, etc.–but I never bothered to study any of his seven books until he died at the ripe old age of 96 in the summer of 2007. On learning of his demise, I ordered a copy of Islands to Windward, his first book, published in 1948, which documents an extended cruise of the Caribbean he made aboard Carib, a 46-foot Alden ketch, shortly after World War II. The photos were nice, but I wasn’t very impressed with the writing, much of which seemed like dated travelogue stuff. Vaguely interesting, perhaps, if you had visited some of the same places and were curious to see how much they had changed, but not very compelling in itself.

This summer I spotted a copy of Passage East, Mitchell’s account of the 1952 Transatlantic Race, in a used-book store and picked it up on a whim. It has been a while since I was so immediately enthralled by a book about sailing. Though its format is shopworn and predictable–a present-tense logbook-style narrative of a long ocean passage–Mitchell’s prose is so engaging and evocative I got sucked right into it.

The best part, really, was that I didn’t know how the race would turn out. Ocean racing in those days was quite a different game. Mitchell and the other eight men racing aboard Caribbee, a 58-foot Rhodes yawl, had no contact with the outside world–no weather information, plus no idea of what their competition was up to. As a reader, or as a participant, it certainly makes the sport more exciting. The suspense of not knowing what the wind will do next, and of not knowing whether you are in first or last place, is palpable. Mitchell brings you aboard and you are right there with him, biting your nails with anxiety when the wind goes light (as it did for a major chunk of Caribbee‘s 21-day passage) and exulting when it blows up and the boat is roaring along with a bone in her teeth. 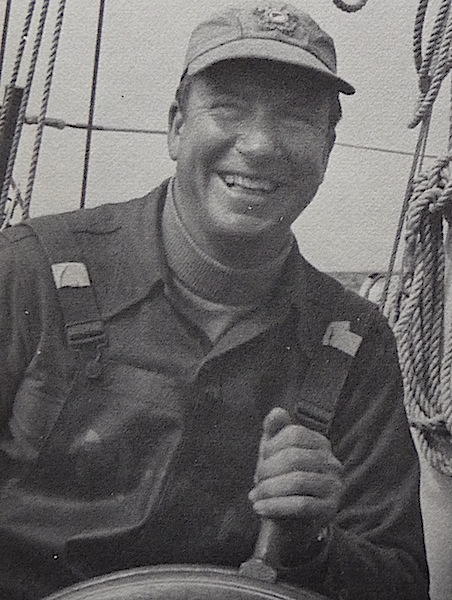 Carleton Mitchell in his prime. His three consecutive Bermuda Race wins in 1956, 1958, and 1960, aboard the S&S centerboard yawl Finisterre, are an achievement that may never be equaled 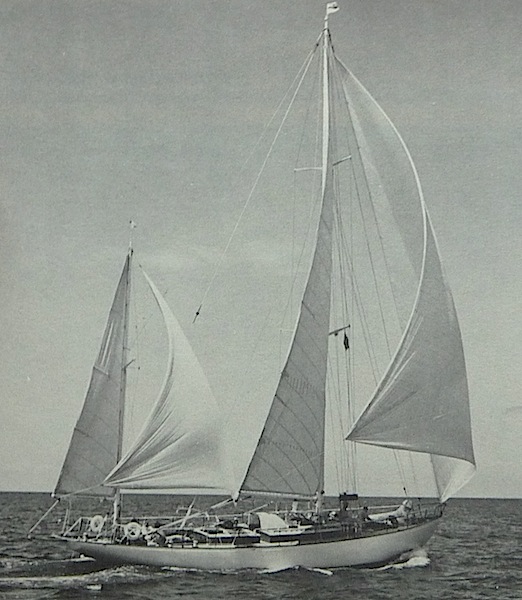 Caribbee under sail in 1952 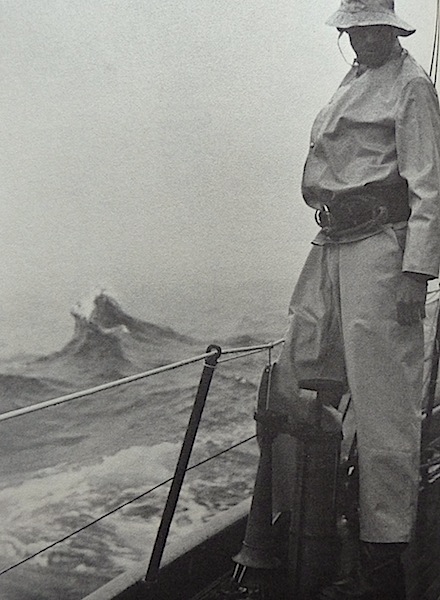 Sailing in strong conditions through fog on the Grand Banks. Caribbee took a gamble and sailed much further north than any of the other boats in the race

Mitchell was renowned for being a true ecumenical sailor, both a racer and a cruiser, and some of the best writing in this book speaks to aspects of the sport that have nothing to do with competition. For example, his concise distillation of the contentment he feels while aboard his boat must resonate with any dedicated sailor: “To desire nothing beyond what you have is surely happiness. Aboard a boat, it is frequently possible to achieve just that. That is why sailing is a way of life, one of the finest of lives.”

Likewise, his discourse on cleanliness while on passage speaks to all who have spent time sniffing their armpits aboard a small boat at sea (at least those who have sailed on boats without watermakers):

All of us are adults with definite standards of privacy and cleanliness. Ashore it would be unthinkable to wear the same underclothes day after day–and night after night–while cheerfully crawling into a bunk still warm from another bathless character in his underclothes. Yet at sea you never give it a thought.

The theory is sometimes advanced that boats and bodies stay cleaner because there isn’t any dirt away from land. Probably true. But the total scrapping of the fetishes of our prophylactic civilization goes beyond that: it is a point of view, part of the alchemy of a small vessel. For we who love the sea in any of its parts, right down to the most sheltered gunk hole in a landlocked bay, also share a love for boats, and others who feel about them as we do. Much of our veneer disappears and we revert to a more basic life. Humans lived together in close contact without benefit of chrome-and-porcelain fixtures for more centuries than it has been years since they were considered necessary. So after a day or two at sea you become only a healthy satisfied animal, blissfully forgetful of germs lurking in nonsterile surroundings, and thoroughly enjoy yourself. Come to think of it, maybe humans have to be a little dirty to be happy–scrubbed children never seem to be enjoying themselves as much as grubby ones.

The book is filled with these nuggets of observation, and with evocative descriptions of the physical environment of the sea, but the most inspiring bits concern the race itself and the competitive spirit of Caribbee‘s crew. Early on, Mitchell describes his own transformation from a cruising man into a racing man:

I don’t know when in my sailing career it happened to me, this craving for speed. I was just a-settin’ and a-dozin’ and not a-botherin’ nobody when the old go-fast bug came a-sashayin’ up and bit me hard. And it took. From a lazy character who would just as soon loll in the cockpit watching Portuguese men-of-war sail through his lee I became the wild-eyed type who laughs demoniacally as the lee rail disappears and looks around for something else to set. So long as the boat is moving I’m happy; when she slows, I die. A terrible thing to confess. Yet now I pity the cruising man I used to be: you get more real sailing–more of the real feel of wind, and sea, and a boat–in a week of racing than in a year of cruising.

Certainly there are many aspects of modern-day ocean racing he would not recognize. Probably the biggest, aside from all the fancy technology we now enjoy, would be the diet. Where top ocean racers these days suck flavorless freeze-dried meals out of foil packets, Mitchell and his crew loaded over 3,000 pounds of stores aboard Caribbee prior to their race (from Bermuda to Plymouth, England) and spent three weeks feasting like kings with a cook to wait on them full time. (Indeed, so much time is spent cooking, their problem in the end becomes a lack of stove fuel rather than food.) 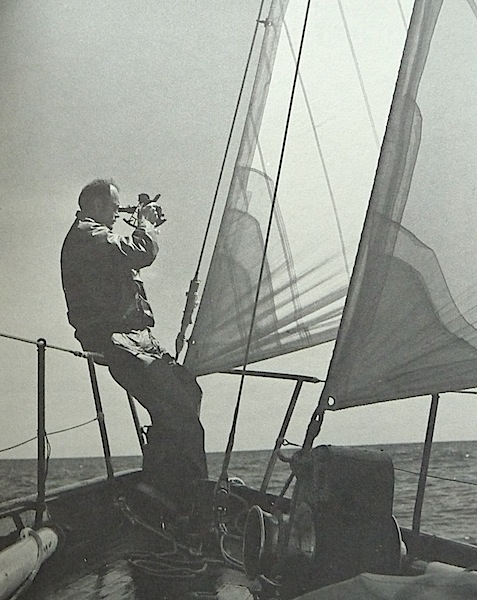 Here’s one thing that has changed since Mitchell’s day. Back then you not only didn’t know where the competition was, if the sky wasn’t clear enough for sextant work, you didn’t really know where you were 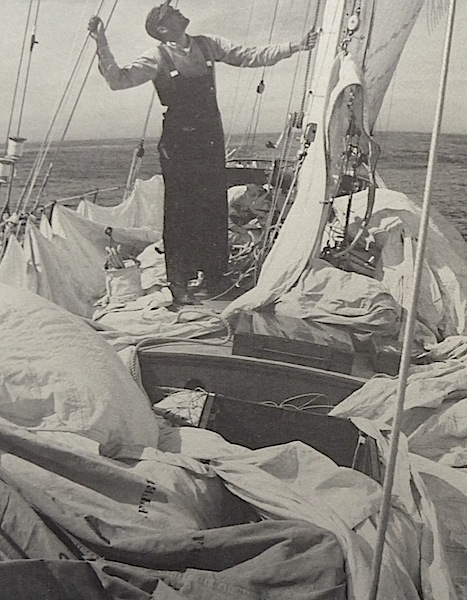 Back in the days of mildew-prone cotton sails, it was also imperative that you air your idle canvas on deck whenever possible. Mitchell and company, despite going so far north, had more opportunities to do this than they would have liked 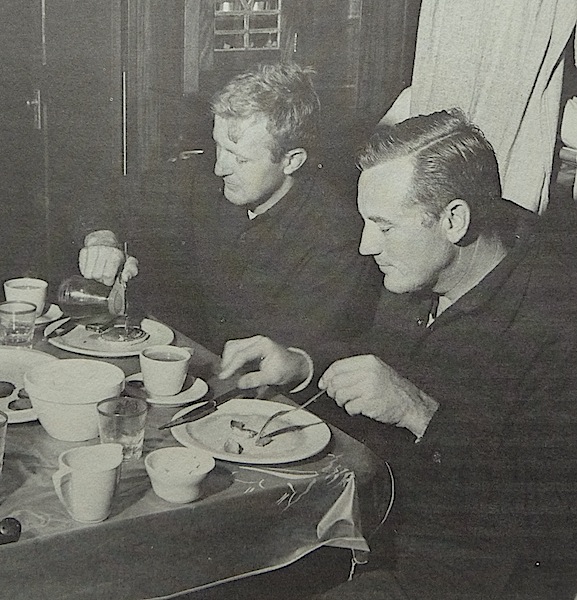 What he absolutely would recognize is the importance of driving a boat hard. Again and again as you read this book, if you are a dedicated cruising sailor, you’ll find your eyes popping at descriptions of all the sail set in conditions that would send us mortals scuttling for our reefing lines. More importantly, Mitchell would also recognize the importance of the company you keep aboard a boat. By all accounts, his great success as ocean racer was attributable in large part to his ability to assemble and motivate groups of highly skilled good-natured racing sailors. He revels in and marvels at the camaraderie aboard his boat, and his writing is strongest when he describes the crew dynamic:

Here we are, nine men, driving a fragile complex of wood, metal, and cloth through driving rain and building sea, a thousand miles from the nearest harbor; no one to see or admire or applaud; no one to help if our temerity ends in disaster. We exceed the bounds of discretion, even go beyond what we know is good seamanship–those basic lessons passed down through generations of men who have fought the oceans. In us all there is a devotion to the somewhat formless and unspoken ideal of simply keeping the boat going at her maximum speed, a dedication which carries us beyond considerations of personal comfort and even safety.

I feel very comfortable telling you that this is one of the best books on ocean racing I’ve ever read. It may be the very best one. I have a sense it may also be Mitchell’s best book, but I haven’t read enough of his writing to make that assertion. I look forward to enjoying more of it so I can find out for sure.

(All photos by Carleton Mitchell)