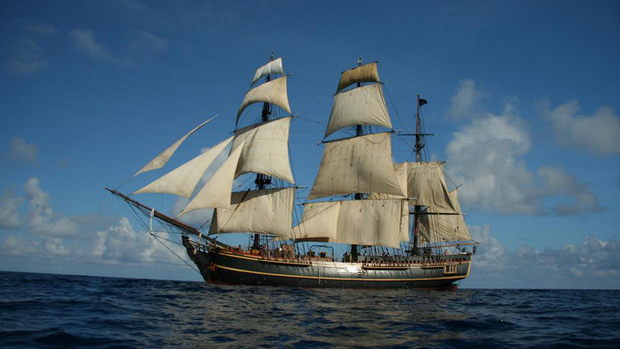 A replica of the good ship Bounty, of Mutinous Fame, has sunk off the Carolina coast south of Cape Hatteras this morning and two of the 16 (or 17???) crew members are reported missing. The vessel, under the command of Robin Walbridge, departed New London, Connecticut, on Thursday, bound for Florida. Evidently, the plan was to sneak past Hurricane Sandy and get west of the storm before it got too far north.

On Saturday, while the vessel was underway, someone in the Bounty organization posted this photo of the ship sailing in heavy weather in 2010 to the ship’s Facebook page: 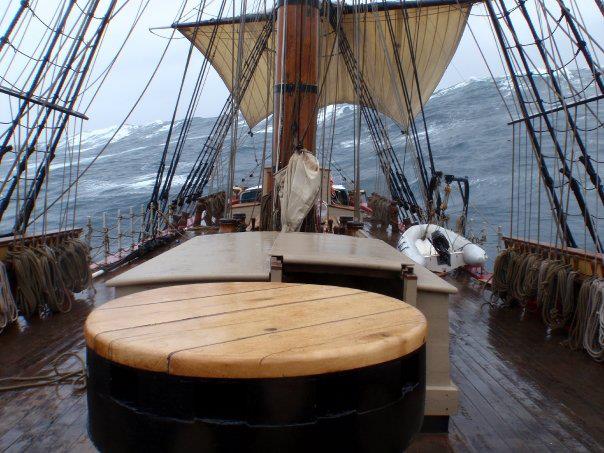 And had this to say about her prospects:

Bounty’s current voyage is a calculated decision…NOT AT ALL… irresponsible or with a lack of foresight as some have suggested.

The fact of the matter is…

A SHIP IS SAFER AT SEA THAN IN PORT!

In the next few posts I will try to quell some fears and help to explain some of the dynamics that are in Bounty’s favor.

A quote than can now be enshrined in everybody’s FLW (Famous Last Words) file.

According the ship’s FB page, a distress call from the vessel was received yesterday evening at 1630 hours, to the effect that the ship had lost power and that her pumps could not keep up with the water coming aboard. As of 0430 this morning, the crew had abandoned ship into liferafts and were subsequently airlifted into Coast Guard helicopters. 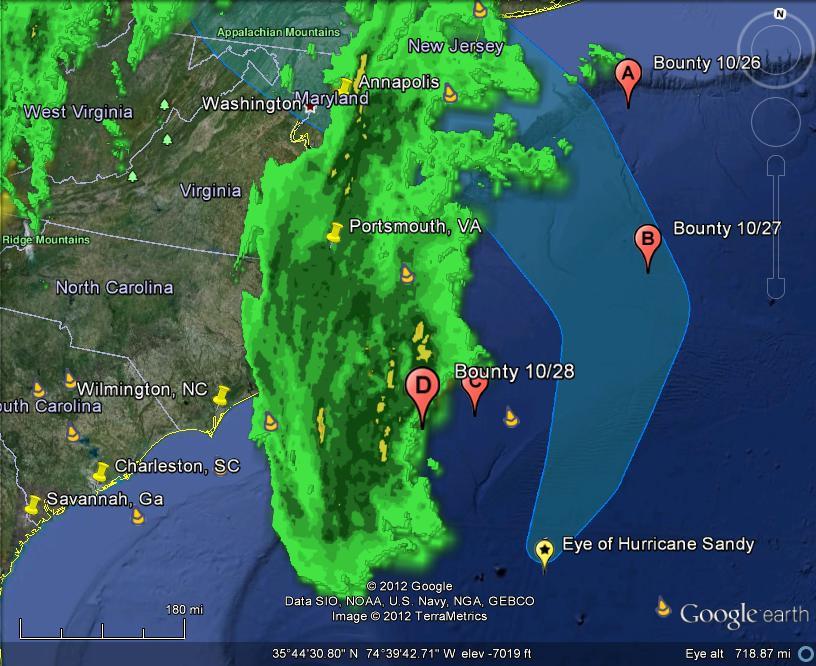 Though this has not yet been acknowledged on the FB page, several sources now report the ship has sunk and two crew are missing.

Call me crazy and chicken-hearted, but what I did on Thursday, after seeing what Sandy was up to (i.e., headed for the U.S. East Coast), was decide not to take Lunacy even as far south as Newport until after the storm had blown through. 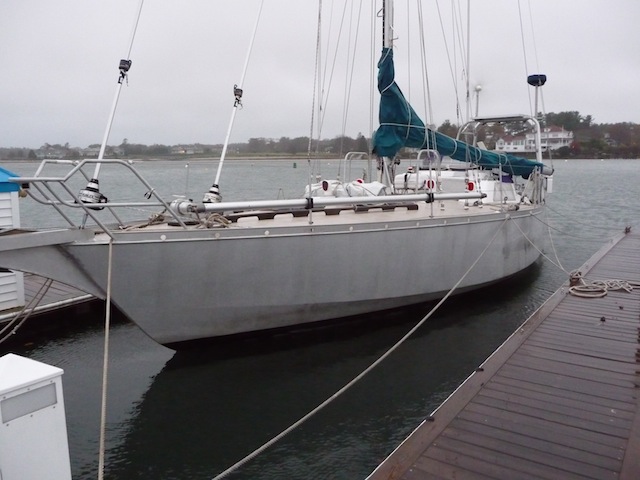 At the moment she’s all laced up in a berth at the Wentworth Marina in New Castle, NH, buttoned up for some weather. I reckon I won’t start moving her south toward Puerto Rico until Thursday at the earliest.

For the record, I’ll note that my personal understanding of the old “a ship is safest at sea” dictum applies in situations where there is a choice between closing a coast and trying to make a harbor during a storm and staying out in open water until after the storm has passed. I don’t understand it as applying when the choice is between staying in harbor and heading out to sea before a storm arrives, UNLESS the harbor is for some reason apt to be insecure during the storm.

I have no information on what Bounty‘s situation in New London was prior to Thursday. 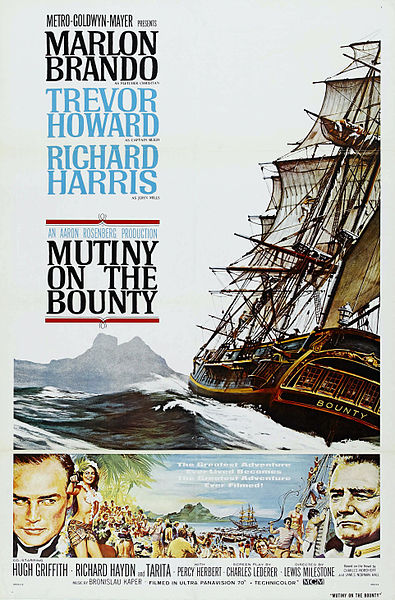 The replica ship, FYI, was built for the 1962 film Mutiny on the Bounty, starring Marlon Brando (as Fletcher Christian) and Trevor Howard (as Capt. William Bligh). Allegedly, the replica ship was to be burned at the end of the film (just as the real Bounty was ultimately burned by Christian and the mutineers after they reached Pitcairn’s Island), but Brando threw a hissy fit and demanded the ship be saved.

The replica, it turns out, was also for sale for $4.6M at the time she sank. 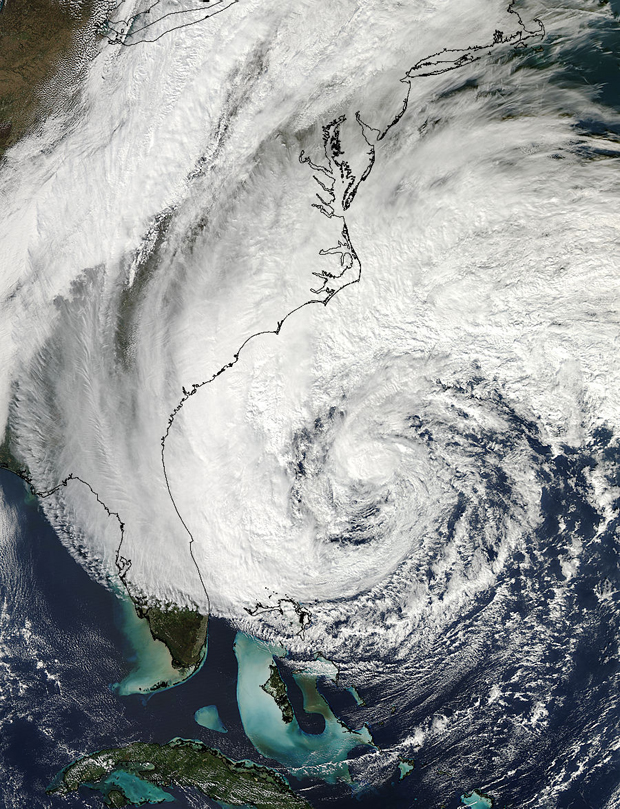 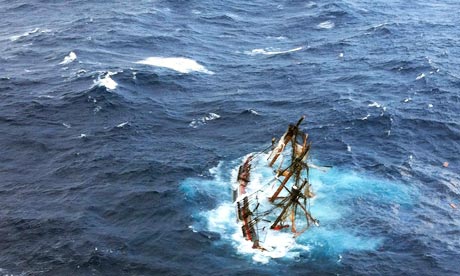 UPDATE: The two missing crew members from Bounty have been identified as the skipper, Robin Walbridge, and Claudene Christian (who is purportedly descended from Fletcher Christian). Amazingly, it seems Christian has been found, but after spending 9 hours or more in the water she unfortunately did not survive. Both Christian and Walbridge were lost overboard as the crew abandoned ship.

Here’s the Coast Guard viddy of the rest of the survivors being hoisted into choppers: