I’ve been scuttling about the past few weeks prepping Lunacy for her trip south to Puerto Rico. On Sunday we moved her from Portland down here to Portsmouth, bashing into some inconvenient head seas along the way, and starting tomorrow we’ll take another jump down to Newport. After that comes a big leap to Bermuda. The fly in the ointment there is a storm named Sandy, which, as of early yesterday morning, was forecast to be past Bermuda and recurving east by Sunday or Monday. The image you see up top, pilfered from Weather Underground, shows modeled tracks for Sandy as of yesterday morning in pink and the official forecast track in white.

As of this morning the situation was changing. Sandy was moving slowly and more and more of those pink tracks showed her doing a fancy double recurve back into the East Coast. And the white track was starting to do the same.

Earlier there had been some vague prognosticatory rumors of a reprise of 1991’s “Perfect Storm,” wherein a late-season hurricane hits the Northeast, going down sometime late this month, and now it seems those rumors have an avatar. According to Jeff Masters’ Weather Underground blog, there is a chance Sandy will get pulled west by a trough approaching the East Coast from the west, rather than getting pulled east by another trough in the central Atlantic. The trough from the west has just arrived from the Pacific, and now that it is over land it can be inspected more closely to see if it is strong enough to win Sandy’s affection. Soon we should know which suitor is more likely to prevail.

Five-day forecast for Sandy, now a hurricane, as of 2pm

I had been hoping to leave Newport Sunday, but now it definitely looks like another case of hurry-up-and-wait, a common disease this time of year.

Meanwhile, prepping the boat has consisted primarily of replacing key bits of gear. 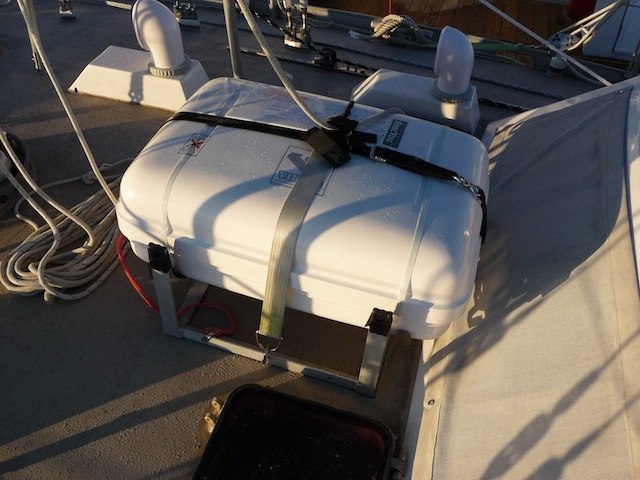 New Viking 6-man offshore liferaft, replacing my old Revere raft that was nearly 30 years old and smelled like stinky chemicals inside when inflated. 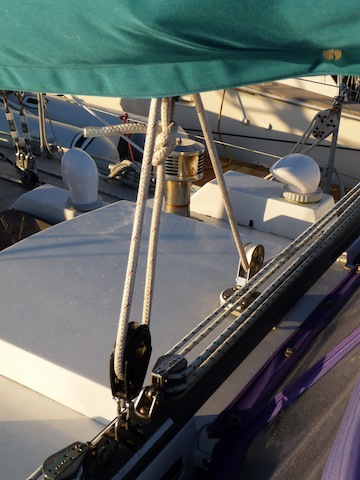 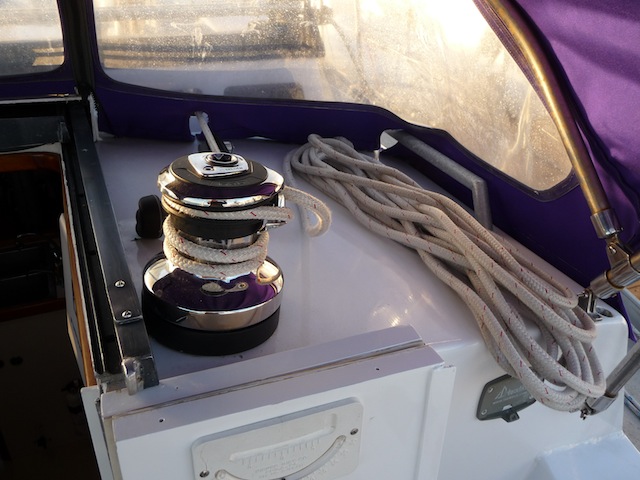 New Harken blocks for the mainsheet under the boom. I’ve replaced the old four-part tackle with a two-part tackle to increase the working load on the sheet so that hopefully my new Selden winch can ease the line in rewind mode like it’s supposed to. 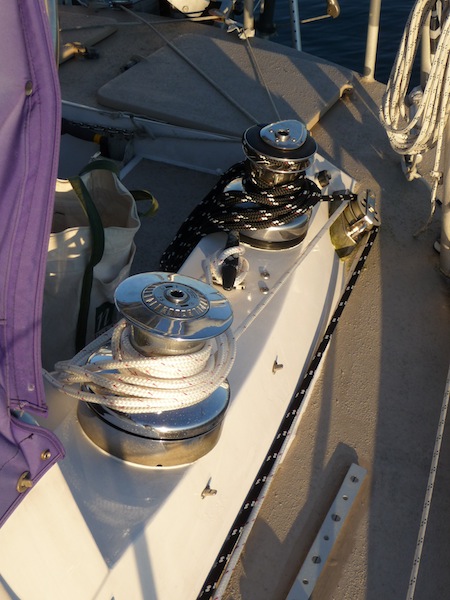 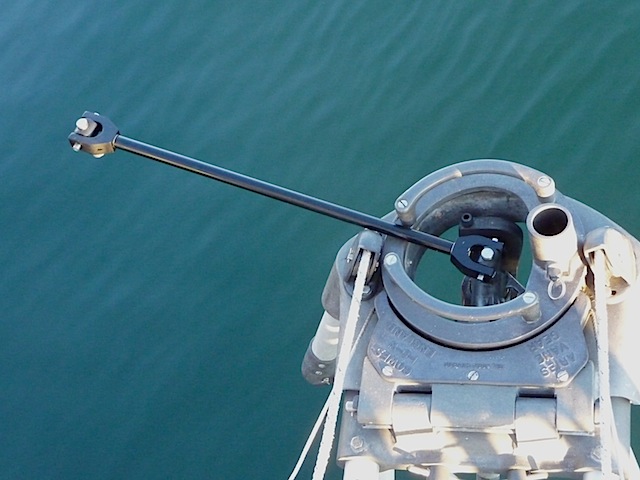 New connecting rod for the Aries windvane to replace the old one, which fractured at one end. (The head of the vane, which the rod connects to the servo gear is off in this photo.) 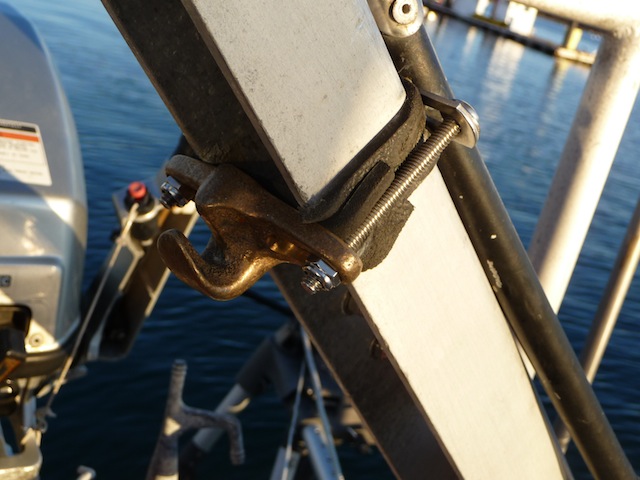 New chain hook for hooking the windvane steering lines on to the tiller. The old one (bronze like this one) broke into bits when I tried to remove it for an inspection. 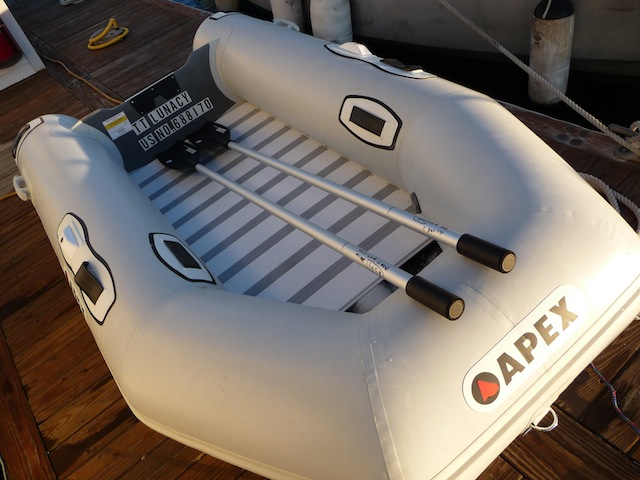 New dinghy (purchased in Annapolis) with TT status and Lunacy‘s official number emblazoned on her transom. (This obviates the need for state registration IF the tender is used only as a tender for a federally documented vessel and never ventures more than two miles from said vessel.) 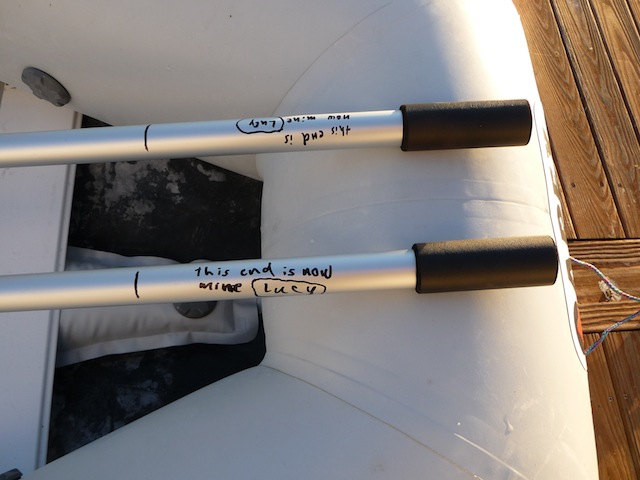 The oars that came with the dinghy were less than useless, so I bought longer ones. Too long, in fact. Daughter Lucy and I marked where they need trimming and she laid claim to the end bits. 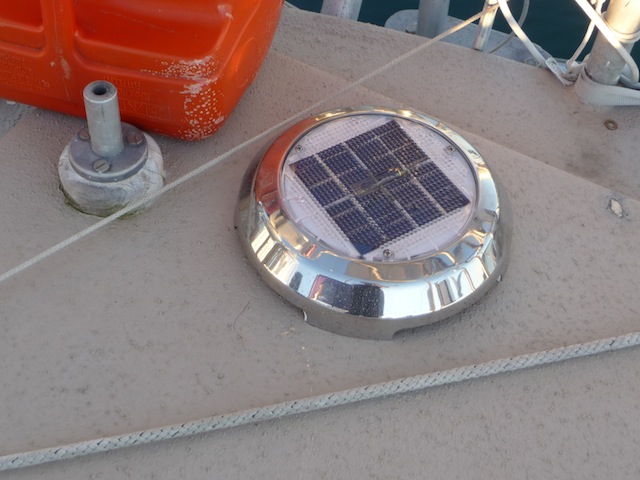 New solar vent aft. This will keep air moving through the boat when she’s on a dock down in the tropics. 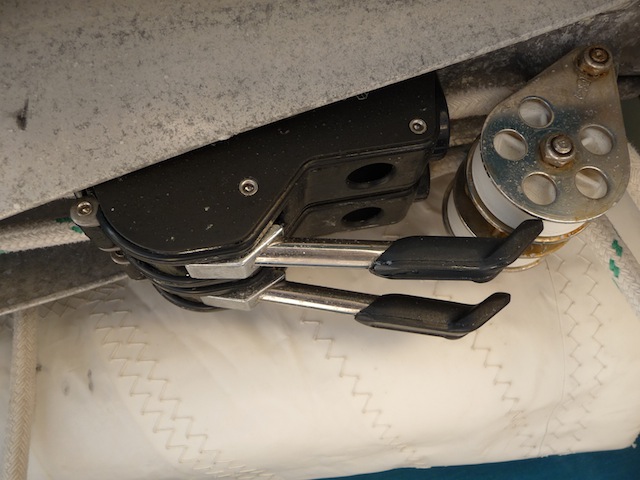 New clutches for the reefing lines on the main boom.

There have been a host of other tidbits to attend to, and this, in addition to thinking too much about the weather, has got me feeling… anxious.

Stand by for more of the same.