Here’s a titillating bit of synchronicity. It seems that marathon voyaging champ Reid Stowe, who has spent much of the last year living with his family in the jungles of Guyana working to refit his schooner, will soon be leaving South America, just as his old buddy Ivo van Laake sails in from Europe on a cruise with his family. Reid’s mom Anne (see photo up top), after whom his schooner is named, died recently, and Reid’s current plan is to sail north to North Carolina via the West Indies and move in with his dad. Meanwhile, Ivo, a Dutch sculptor living in France, has acquired a rugged metal cruising boat, which he has named Vlaag, after the tiny plywood boat he cruised the Pacific on when he was young. He cast off his lines last month and is currently en route to Madeira and ultimately to Brazil.

Reid and Ivo have a lot of history together. They first met in New Zealand in the early 1970s and lived together aboard the first Vlaag. During this time Ivo shared with Reid many profound insights, both nautical and spiritual, that he had recently received from Bernard Moitessier while in Tahiti. Later Reid and Ivo sailed together across the Atlantic and back on Reid’s first boat, a small plywood catamaran named Tantra, and ended up on the Amazon River in Brazil. Here they split over a woman they both loved, Iris, who was already married to Ivo, but who later married Reid. 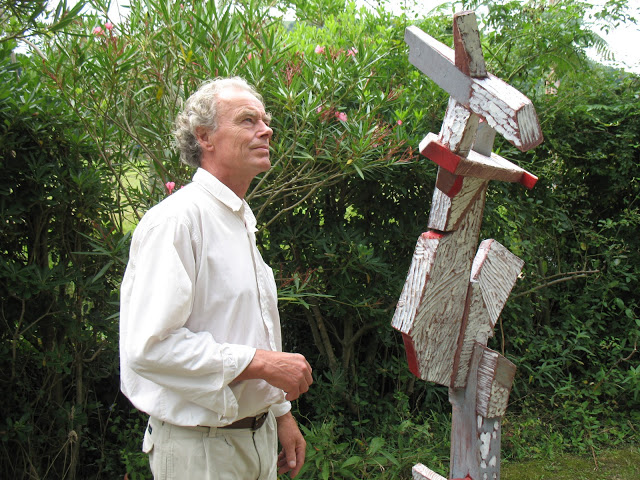 Ivo in a recent photo with one of his sculptures

It’s a complicated tale, to say the least. When I contacted Ivo two years ago to discuss Reid (just as Reid was completing his record-breaking non-stop 1,152-day voyage), he flatly refused to talk to me. I can only speculate as to why. (For a lot more detail on all this, you can check out this post here.)

It is ironic–and appropriate, I suppose–that they will now miss each other in South America.

Sailing the schooner Anne north from Guyana will most likely be challenging. Reid has done a lot of work on the boat over the past several months, but has yet to address his rudder, which is no longer attached to its steering gear. He’s been steering the boat for some time with lines run overboard to the rudder and last I was in touch with him was hoping to haul out in Trinidad to fix this problem. But I’m not sure he’ll have time for this now, as he hopes to be in North Carolina by December. 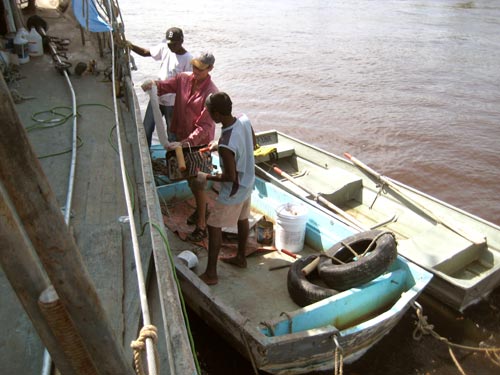 Reid leads a work crew during Anne‘s refit in Guyana 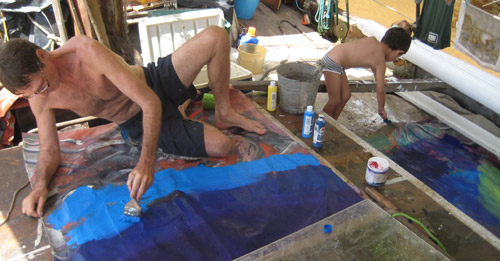 If you’re in the mood for an adventure, Reid is actively seeking crew for the passage north. If you want to sign up, or if you just want to follow what’s happening, you can check out his website. 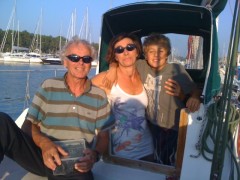 Ivo with his partner Christine and their son Rafael 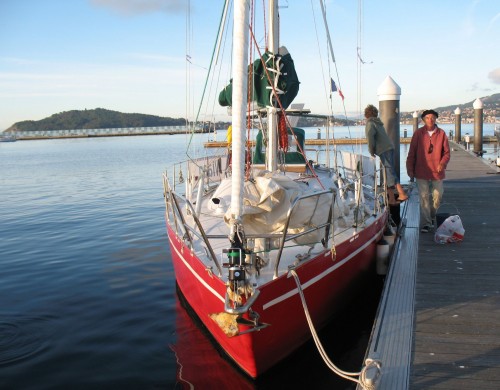 Vlaag poised to depart for Madeira

Ivo, meanwhile, seems to have his boat well in hand. You can follow his progress at his blog.