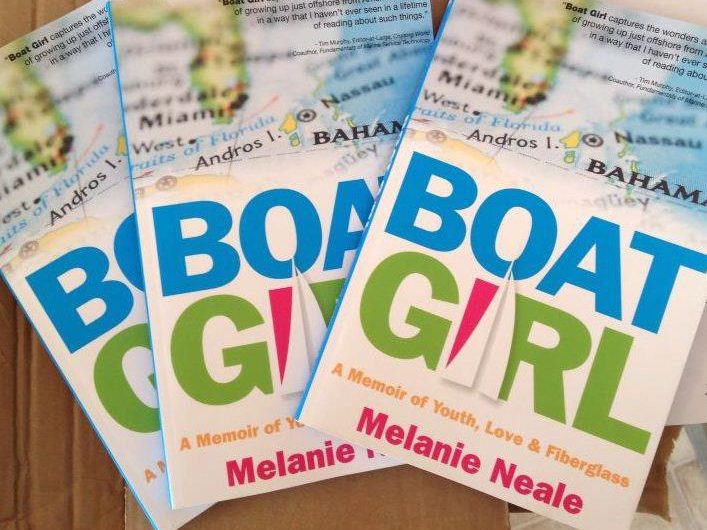 I first met the Neale family–Tom, his wife Mel, and their two young daughters, Melanie and Carolyn–in November 1993 on the Virginia shore in Chesapeake Bay. I was sailing south with Nim Marsh, then a once-and-future editor at Cruising World magazine, aboard his boat Breakaway, a Bristol 29, and he was anxious to visit the Neales, who were aboard their Gulfstar 47 Chez Nous, preparing to embark on their annual pilgrimage from the Chesapeake to the Bahamas. I remember pulling into an anchorage past the marina where Chez Nous was docked and running aground in a tricky channel. Nim was frantic and declared we had to get off before Tom had a chance to come over in his dinghy to help us out.

“If he has to pull us off, I’ll never hear the end of it,” he insisted.

You never saw two guys set an anchor and kedge a boat off a shoal so fast in your life.

I got to know the Neales better a few years later, round about 1998, when I was Tom’s editor at Cruising World. The family then would cruise as far north as Newport in the summer, and Tom often came into the office barefoot to attend to his business. Daughter Melanie was crewing on the schooner Adirondack, taking tourists out for daysails, and I remember taking Tom and Mel out early one evening for a sail on my old yawl Crazy Horse. Tom looked a bit alarmed when he saw my halyard winch pull off the mast as I raised the mainsail. Then fog descended on us, and both Tom and Mel seemed rather nervous as we put out into Narragansett Bay anyway. We sailed back and forth between Jamestown and Newport in almost zero visibility and repeatedly crossed tacks with Aquidneck. Each time we saw her emerge suddenly from the mist, Melanie was standing proud on her bow, looking much more confident than her parents.

Tom Neale has made a career out of being a liveaboard cruiser (he now writes most often for Soundings and BoatUS Magazine), and though he’s never been tempted to venture beyond the U.S. East Coast and the Bahamas, I know of no one who has spent more time afloat. His daughters didn’t spend just a few years living on a boat, as is the case with most other “boat kids,” they spent their entire childhoods afloat and never had any geographic point they could call home while growing up. 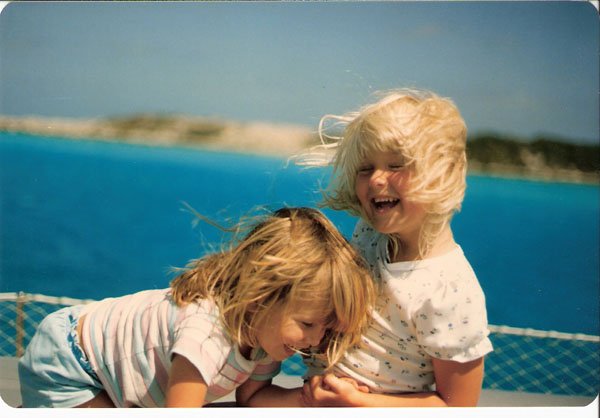 Carolyn and Melanie romping aboard Chez Nous in their younger days

If you are at all curious to find out what this is like, I urge you to read Melanie’s memoir, Boat Girl, which has just been released by Beating Windward Press. She is every bit as good a writer as her dad and doesn’t pull any punches. It’s all in here: early memories of the drug-plagued Bahamas in the 1980s, anorexia and teen angst, the fights with her domineering, somewhat paranoid father, the sex and drinking, the struggle for identity, and–finally–the triumph of independence.

Though it is titillating, the book is also introspective. I was particularly impressed with how Melanie handled its denouement, where she and a boyfriend endure Hurricane Wilma aboard a 28-foot boat in a down-and-out marina in Miami. Instead of stressing the sensational aspects of this adventure (and there were a few), she instead uses it to segue into some very mature reflections on what it means to have the concept of “home” indelibly impressed upon these mortal chunks of floating fiberglass we call boats. 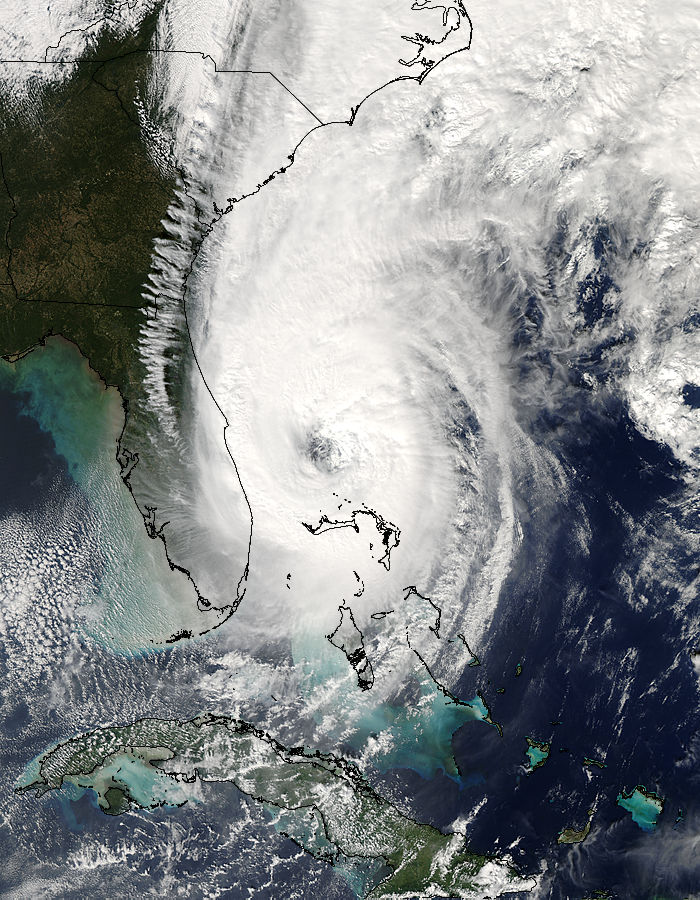 Wilma departing Florida in 2005, after mussing up Melanie’s life a bit

At the end of the book, we do find Melanie at last living ashore, married with a kid, but still struggling with what she calls “boatlove.” Like all of us, her challenge now is to balance a so-called “normal” life with the dream of maybe going cruising someday. 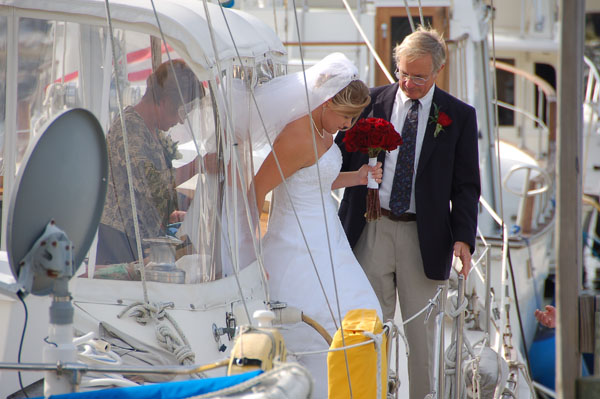 Melanie with her dad on her wedding day 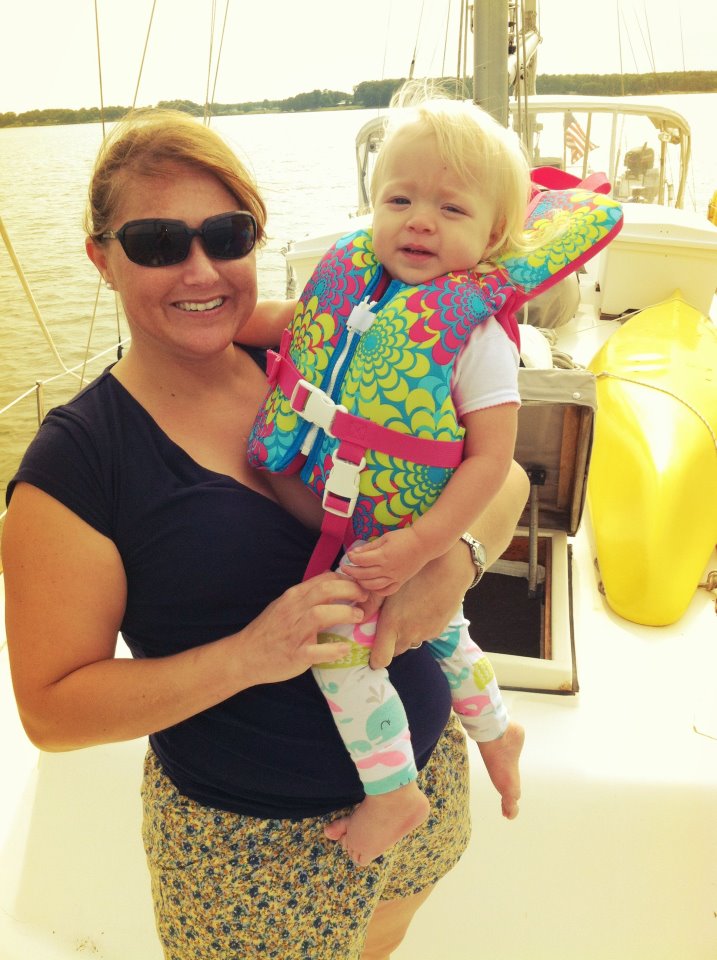 Melanie with her daughter Maryann aboard Chez Nous

Tech-heads out there will also find some choice nuggets in this book. For example, my eyes nearly bugged out of my head as I read how Melanie and her mom coped with the weeping keel bolts they found on the old Columbia 28 Melanie bought after moving off Chez Nous. Instead of having the boat hauled and the keel dropped (which would cost nearly as much as the boat itself), they installed automotive grease fittings in the fiberglass around the bolts, then shot the laminate full of marine caulking. Three whole tubes worth. And it worked! Melanie lived five years on the boat and apparently had no more problems with leaks.

PS: As a companion piece to Melanie’s book, you should also check out this article by Tom, in which he describes how his floating family got its start. It’s one of the best things he’s ever written, IMHO. 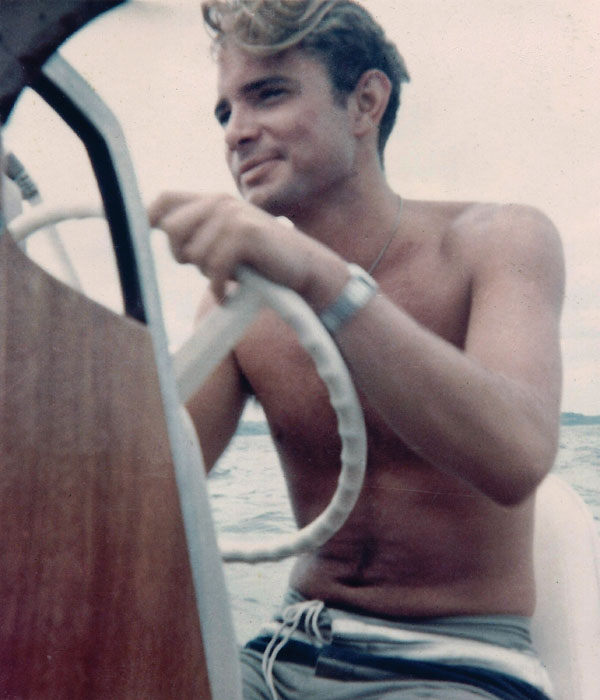 Tom Neale as a piratical youth

PPS: All photos here (except that sexy satellite shot of the storm) are from Melanie’s Boat Girl Facebook page and from Tom’s article mentioned above. 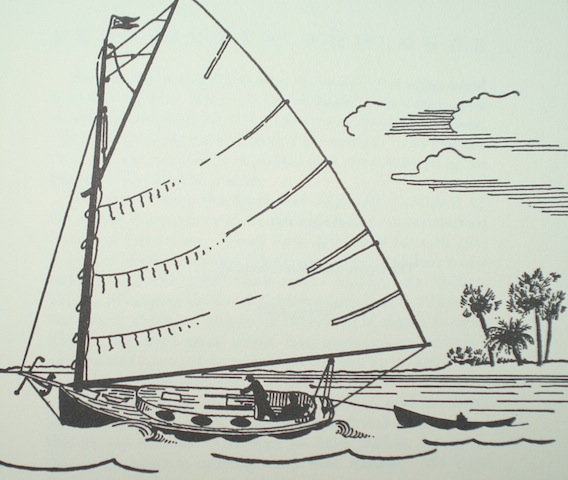 THE BOY, ME AND THE CAT: Cruising South Down the ICW (Before There Was an ICW)