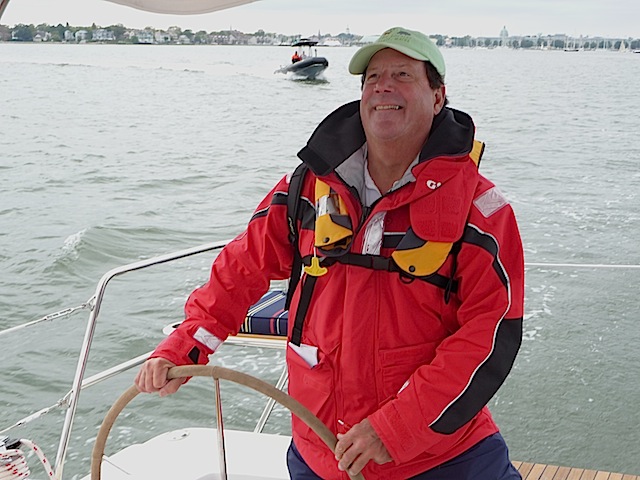 After departing the Annapolis show on Sunday morning, I returned to Annapolis Tuesday morning to test-sail boats with my colleague and partner-in-crime Adam Cort from SAIL magazine. We each got in four boats in less than 48 hours, which, believe it or not, is a semi-easy schedule when it comes to post-show testing. On one of the two monohulls I sailed, the new Hunter 40, I shared a test with Cruising World‘s editor-in-chief Mark Pillsbury, thus continuing the bilateral cooperation initiated by Elaine Lembo and I this past summer. Mark didn’t want to cooperate for too long, however, and hopped off the boat about 15 minutes into the sail. In that photo up there you can see the mysterious black RIB that swooped in to steal him away from us.

Our host was Hunter’s Director of Destructive Testing, Steve Pettengill, with whom I mangled a rudder last time I test-sailed a new Hunter after the Miami show in February 2011. 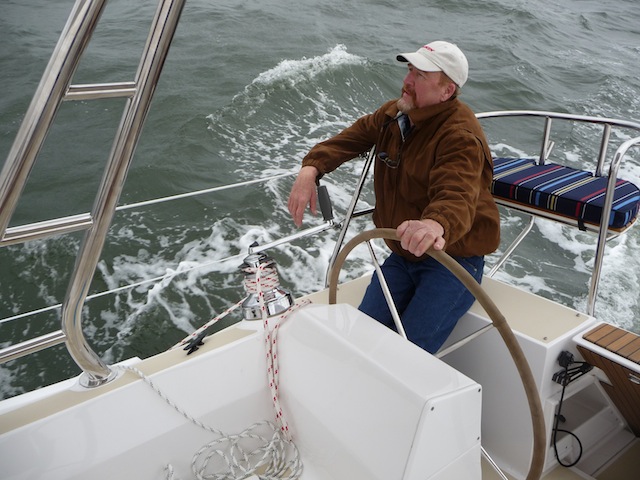 Pettengill on the wheel. Controls for both the mainsail and the jib are easy to reach from the twin helms

This time we didn’t break anything, which I think was a little disappointing for Steve.

The inside skinny on the Hunter 40 is that it was created pretty much from scratch in less than 8 weeks after David Marlow bought Hunter Marine from its bankrupt parent company this past summer. At the show the boat absolutely reeked of styrene, as it was so new the laminate was still curing, but finish quality otherwise was very good for a mass-production boat. Finish quality on Hunters has generally improved over the past few years, and I expect this trend to accelerate under Marlow, as he’s made quite a name for himself building high-end powerboats. The son of a Florida bootlegger who started building boats way back to smuggle booze in, he is very passionate about this business.

During our test the boat sailed like a witch. Our boat (hull no. 1, obviously) was disadvantaged in that it had a shoal keel (5’2″) and an in-mast roller-furling mainsail (which, unfortunately, is what most people order), but still she was very closewinded and surprisingly fast. She was fully powered up at a 35-degree apparent wind angle, making 6.9 knots in 12 knots of apparent wind. Pinching up to 25 degrees, she still made 5.8 knots, and off the wind, at a 120-degree apparent angle, she managed 5.6 knots with just a 110 percent jib flying in the foretriangle. 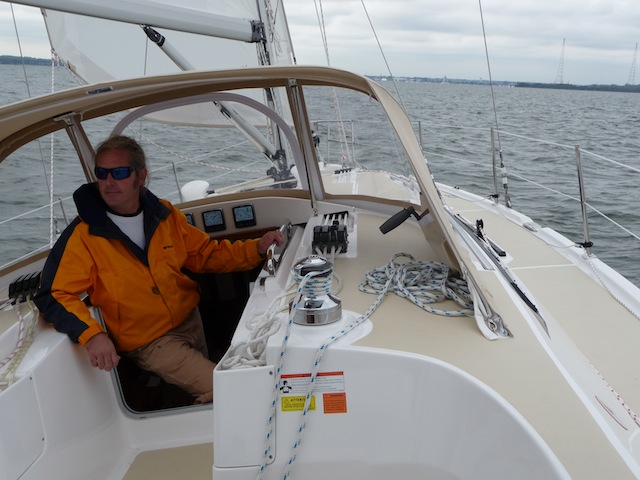 Order this boat with a big full-batten mainsail (it has a B&R rig, so you can make it as roachy as you like), a deep keel (6’8″!), and a removable sprit for flying a big A-sail and you’ll be tearing up the fleet in your local beer-can series.

The other monohull I tested, a cute little pocket cruiser from Japan called the Zen 24, also surprised me with how well it sailed. 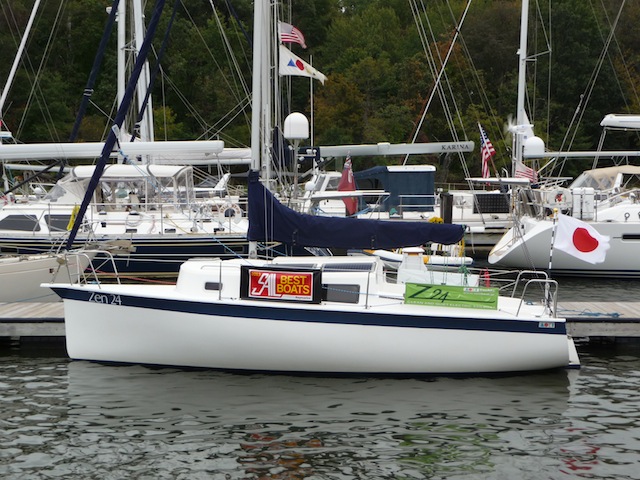 The Zen 24 in profile, bedecked with banners. The shrouds are led to chainplates on the side of the coachroof, so it’s very easy to move forward along the sidedeck

It is not a centerboard boat, but instead has a fixed keel. The interior is quite roomy for such a small boat, with an enclosed head and berths for four. Finish quality is a little rough, but I found the boat’s performance was impressive. We had no instruments aboard, but I estimated our top speed was a bit over 6 knots in a true wind of just 9 to 10 knots. Closehauled the boat was fully powered up at a 40-degree apparent angle, and we could pinch up to 30. And this was in spite of flying a mainsail that wasn’t quite cut properly. With her fixed keel, the boat didn’t feel too tender, and best of all the helm was extremely stable. If you let go of the tiller, the boat rounds up very slowly, and I’m sure it would be easy to get her sailing herself with a little help from a tiller line or bungee cord.

The standard propulsion package is electric, and reportedly the boat will run 5 hours at 5 knots before it needs a charge. 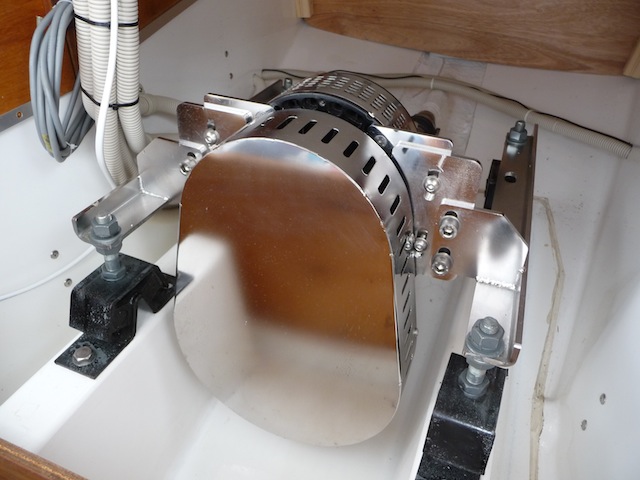 The motor in situ. You can order a diesel if you like. There’s also a stern bracket for an outboard, so you can carry auxiliary auxiliary power 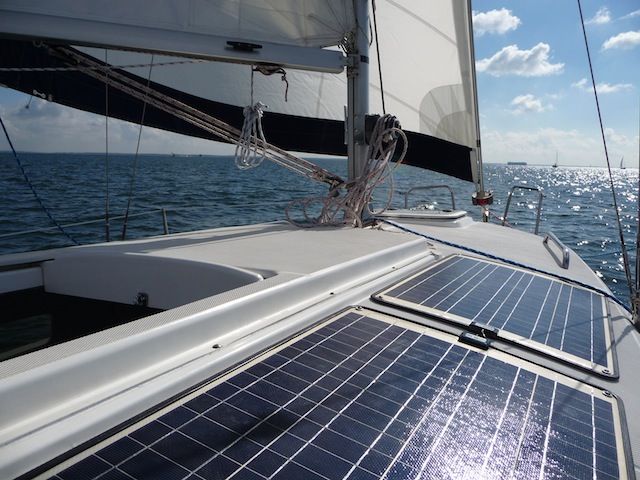 Solar panels for tickle-charging the four 48-volt batteries that run the motor are optional. Plugged into shorepower the batteries can be fully recharged overnight 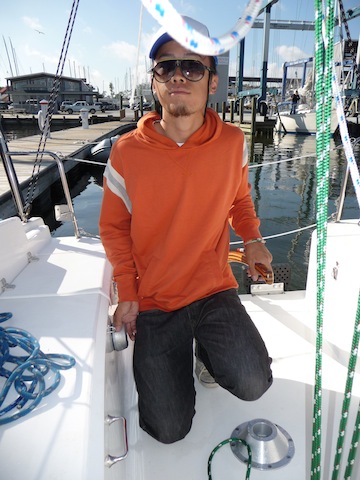 The best thing about electric power is maneuvering in close quarters. You can turn super-low revs and always maintain steerage

For a full review of these two boats, keep an eye out for upcoming issues of SAIL. The reviews will also appear in the next issue of SAIL‘s New Sailboat Review. 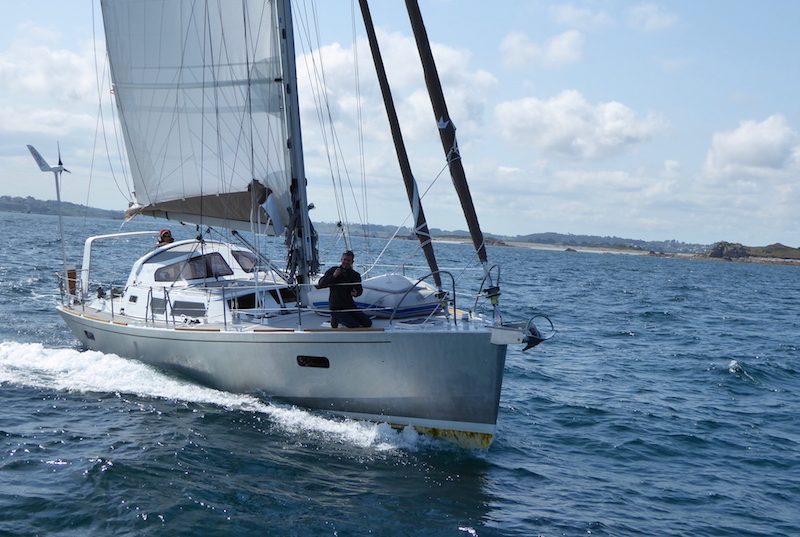