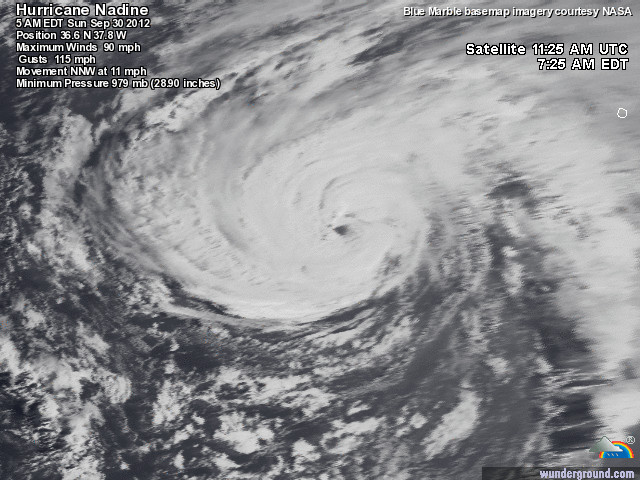 NO ONE HAS BEEN PAYING MUCH ATTENTION, as she’s been wandering around far from land all this time, but as of today Hurricane Nadine has been raging in the North Atlantic for 18 days, which puts her in fourth place on the list of longest-lived named Atlantic storms since 1950. And she’s still not done yet.

As you can see here she has run a rather circuitous route and has already carved out one big clockwise loop south of the Azores. She’s currently in the middle of carving out a much smaller counter-clockwise loop west of the Azores, which, for all I know, may make her the first storm ever to draw a figure-eight.

The current forecast has Nadine running at least until Wednesday, when she should start tangling with an upper-level low pressure system near the Azores. This should get her to second place on the longest-storm-since-1950 list, after Ginger, which ran for 27.25 days back in 1971.

She is also unlikely to beat the all-time Atlantic record held by the great San Ciriaco hurricane, which ran for 28 days back in 1899.

As you can see, this was a much more impressive storm than either Ginger or Nadine. It totally raped the Lesser and Greater Antilles and the Bahamas, running from all the way from Antigua to the Abacos at Cat. 3 and 4 strength, bopped Cape Hatteras in the nose, then went and jumped the Azores at Cat. 1 force. In all, she killed an estimated 3,369 people.