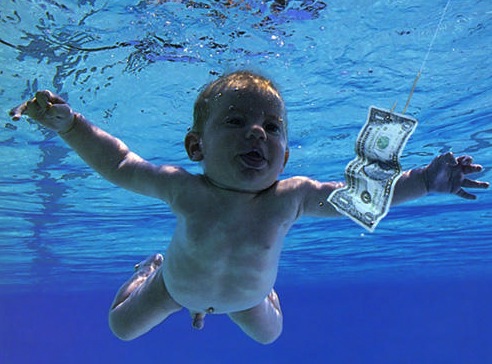 IN THE SUMMER OF 2008 I had the great pleasure of meeting James Wharram and Hanneke Boon in Mystic, Connecticut, where, during the course of a free-ranging discussion on boat design, neurotheology, and bluewater sailing (among other things), they recommended I read a book entitled The Aquatic Ape, by Elaine Morgan. I couldn’t help but be intrigued, for I have long marveled at the human affinity for seafaring and have always felt there must be some deep connection between our species and the ocean. In spite of being terrestrial creatures, it seems we do have a very primal desire to get down to the shore and, if possible, to travel over the distant horizon we find there.

Herman Melville, in the opening paragraphs of Moby Dick, summed it up very nicely:

But look! here come more crowds, pacing straight for the water, and seeming bound for a dive. Strange! Nothing will content them but the extremest limit of the land; loitering under the shady lee of yonder warehouse will not suffice. No. They must get as nigh the water as they possible can without falling in. And there they stand–miles of them–leagues. Inlanders all, they come from lanes and alleys, streets and avenues–north, east, south, and west. Yet here they all unite. Tell me, does the magnetic virtue of the needles of the compasses of all those ships attract them thither? 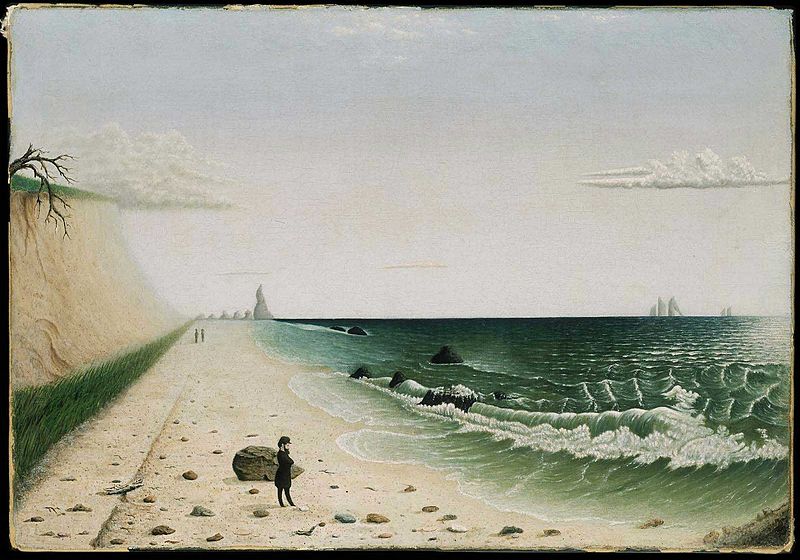 I finally got around to reading the book last year (The Aquatic Ape, that is, not Moby Dick) and found it very intriguing, but I also quickly figured out it is in fact rather controversial. Morgan’s hypothesis is not original. First put forth by Max Westenhofer, a German pathologist, in 1942, then again by Alister Hardy, a British marine biologist, in 1960, the notion is that several aspects of modern human physiology might well be the result of our ancestors having evolved in an aquatic environment. For example, we learned to walk on two legs to improve our wading and swimming skills, we lost our hair and developed subcutaneous fat when adapting to spending time in the water, we developed an unusual ability to control our breathing and hold our breath so we could swim and dive, etc. 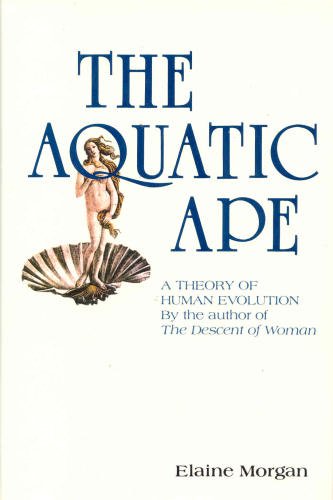 Reputable paleoanthropologists for the most part have ignored the Aquatic Ape Theory and consider it pseudoscience, for various reasons. I will not belabor you with details of the arguments here, but if you are interested you’ll find a reasonably concise outline of the debate on Wikipedia. If you are super-interested, you’ll have little trouble finding various other sites online arguing for and against the theory.

Personally, I have now studied the subject enough to believe that the Aquatic Ape Theory most likely is not true, at least as an explanation of our unique physiology. But I am left with a conviction that our affinity for the sea, and our ability to travel over it, probably does have deep evolutionary roots.

To get a good sense of how very prehistoric human seafaring is, I urge you to study a book by Brian Fagan, an anthropologist (and a sailor), called Beyond the Blue Horizon, published by Bloomsbury Press just this year. It describes man’s ancient relationship with the sea as it evolved in various places and cultures around the world, beginning in Southeast Asia over 50,000 years ago. 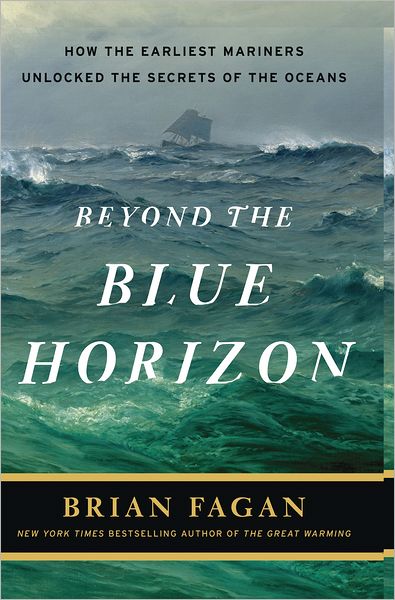 To put this in perspective, bear in mind that agriculture and what we now term “civilization” got started just about 10,000 years ago. Yet more than 40,000 years before that delicious process got rolling, people were deliberately going to sea in vessels they had created themselves. This process started with prehistoric mariners transiting narrow straits in and beyond the Indonesian archipelago as they hopscotched their way from the Asian mainland to New Guinea and Australia. By at least 35,000 years ago they had reached the islands of the Bismarck archipelago, east of New Guinea. By 25,000 years ago they were as far east as the Solomon Islands. Distances between these various islands and landmasses were much shorter then, as sea levels were 150 to 300 feet lower due to all the water locked up in Ice Age glaciers at the poles. But still this is fairly impressive, especially if you consider that Homo sapiens most likely only first started migrating out of Africa about 70,000 years ago.

Contours of the Indonesian archipelago in prehistoric times

The seafaring migration out into the Pacific stalled for many thousands of years, presumably because the next leap east of the Solomons was a much longer one. But then, about 5,000 years ago, there appeared a more advanced seafaring people, with agriculture and fancy canoes–we now call them the Lapita–who ultimately made it as far as Fiji. Eventually, it was the descendants of these people who, starting a little over 1,000 years ago, launched the amazing super-long-distance Polynesian voyages that led to the peopling of the entire Pacific Ocean, from as far north as Hawaii, to as far east as Easter Island, and as far south as New Zealand. 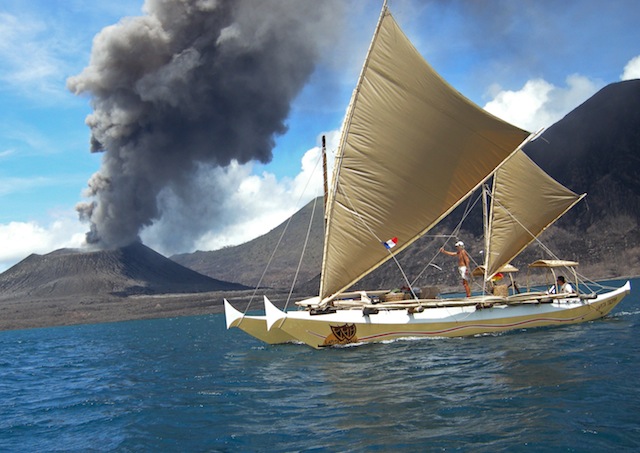 As part of their “Lapita project” James Wharram and Hanneke Boon created a vessel they believe is an accurate recreation of double-canoes sailed by Lapita voyagers thousands of years ago. In the Lapita Voyage of 2008-09, two of these canoes were sailed from the Philippines to the islands of Tikopia and Anuta. Here one of the vessels sails by an active volcano in New Guinea (Photo by Phillip Hympendahl) 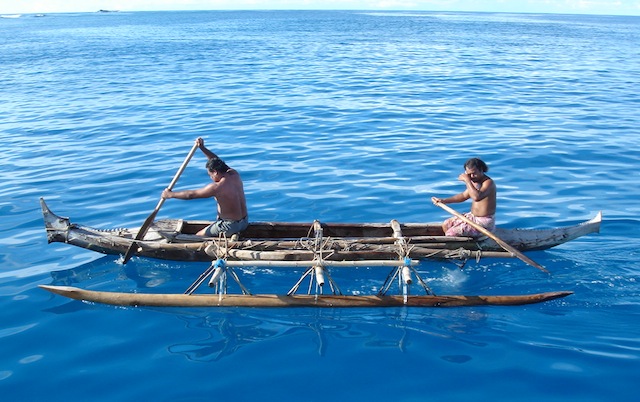 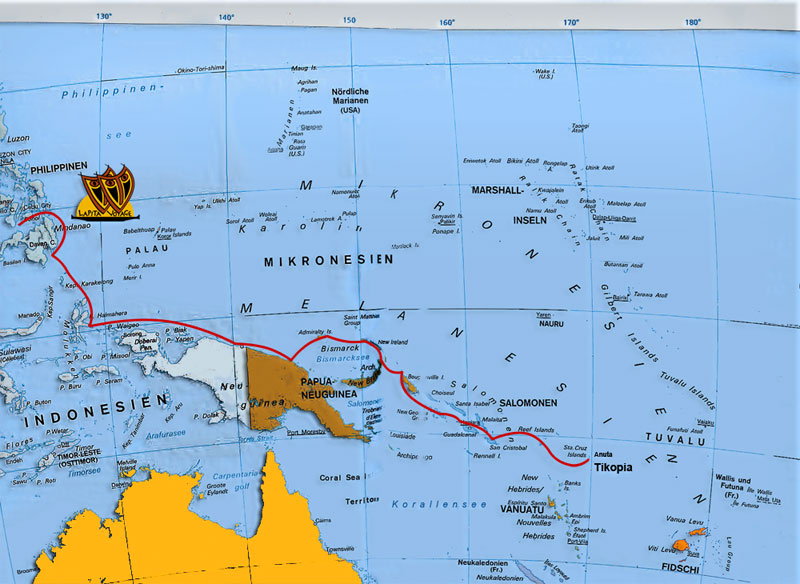 Just how did these most ancient of seafarers get themselves to Southeast Asia and the western shores of the Pacific Ocean in the first place? Current thinking has it that the first modern humans successfully migrating out of Africa may have done so via a “Beachcomber Express” that led them rather rapidly along the northern shores of the Indian Ocean, where they could easily exploit aquatic food sources. So rapidly, in fact, that this group managed to get all the way to Australia about 10,000 years earlier than the Homo sapiens who eventually made it to Europe.

Going back even further, to before the exodus from Africa, the current evidence also has it that the first humans to develop symbolism and fabricated tools lived in caves on the coast of South Africa about 170,000 years ago and subsisted primarily on seafood.

So, yes, there certainly is evidence now that the most successful groups of prehistoric Homo sapiens were those who focussed on the sea for their livelihood. And, more historically, we don’t have to think too hard to support an argument that more modern seafaring humans have tended to be more successful and prosperous than their landlocked brethren. The history of western Europe most particularly emphasizes this and culminates in the ascendance of Great Britain, an otherwise soggy and insignificant island nation that managed for a time to dominate much of the world through the preponderance of its navy.

To put this into a more recent, more ironic perspective, consider the meetings between Britain’s Capt. Cook and the Polynesians he encountered in the Pacific in the 18th century, less than 300 years ago. Here were the two most advanced maritime cultures, prehistoric and modern, interacting with each other in real time after having wrapped their way around the world in opposite directions. It is worth remembering that Capt. Cook, though he could dominate the Polynesians with his weapons (most of the time anyway), could only marvel at how Polynesian vessels were both faster and much more weatherly than his own. 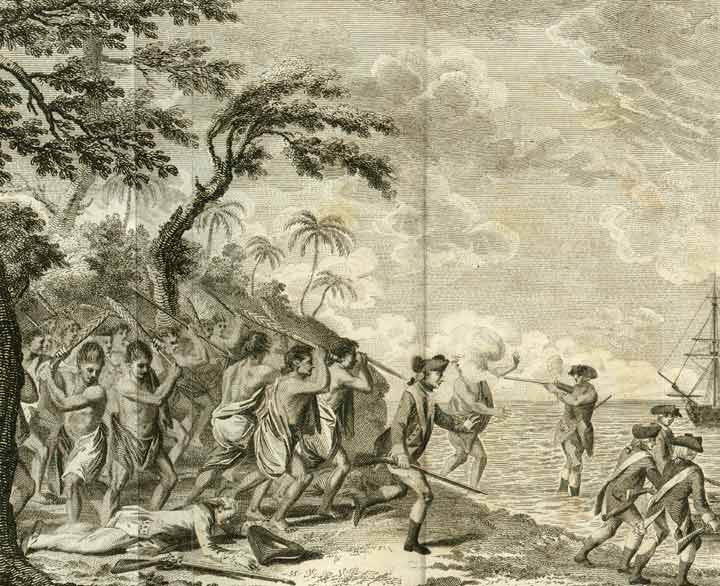 Capt. Jimmy Cook bites the dust in Hawaii in February 1779

But does all this mean our affinity for the sea is part of our evolutionary hard wiring? After all, things we learned after becoming fully human aren’t necessarily the things that made us human in the first place. 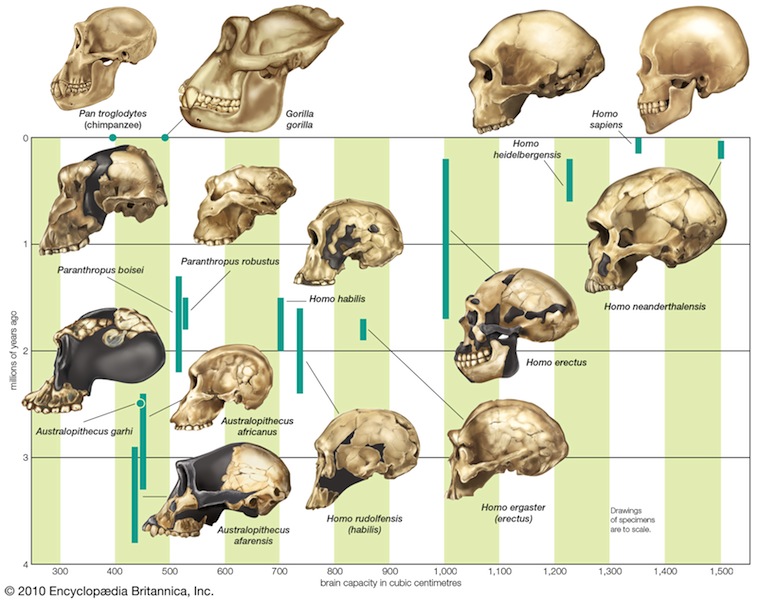 Interestingly, evidence is mounting that hominid species predating Homo sapiens were also capable of going to sea. Primitive tools discovered on the island of Crete suggest that Neanderthals or perhaps even Homo erectus were voyaging on the Mediterranean 130,000 years ago. Going even further back, tools found on the island of Socrota, 240 miles off the coast of Yemen, suggest Homo erectus was putting to sea in the Indian Ocean over 500,000 years ago. There may also be evidence that Homo erectus did some voyaging in Asia long before Homo sapiens ever got there.

Going all the way back to the Rift Valley in East Africa, where hominid species and their ancestors first evolved, the current thinking has it that the evolutionary jump from upright bipedal primates with small brains like Australopithecus afarensis to more human large-brained species like Homo habilis was prompted by a period of intense climatic instability. Two million years ago the Rift Valley was frequently inundated in catastrophic floods, with very large lakes, equal in size to the American Great Lakes, appearing and disappearing over relatively short periods of time. This led to the emergence of smart tool-making hominids who were capable of adapting to a frequently soggy environment that was constantly changing. 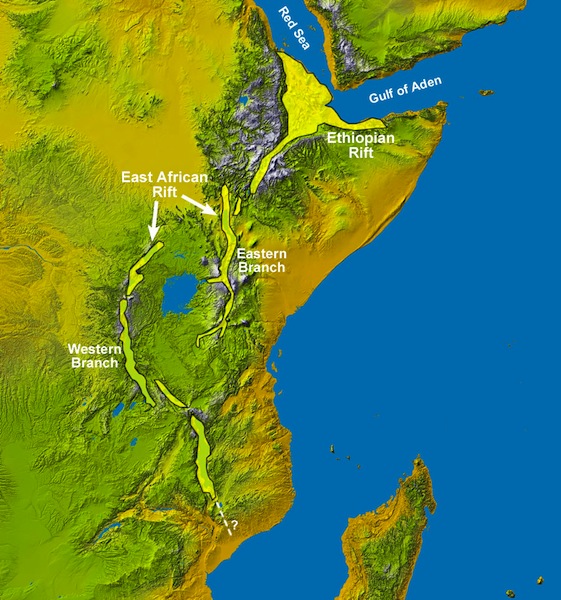 The East African rift system. The lakes here were once much more extensive and more volatile

It certainly wouldn’t be too much of a stretch to suppose that one of the tools these earliest human ancestors invented was some kind of a boat for staying afloat on. 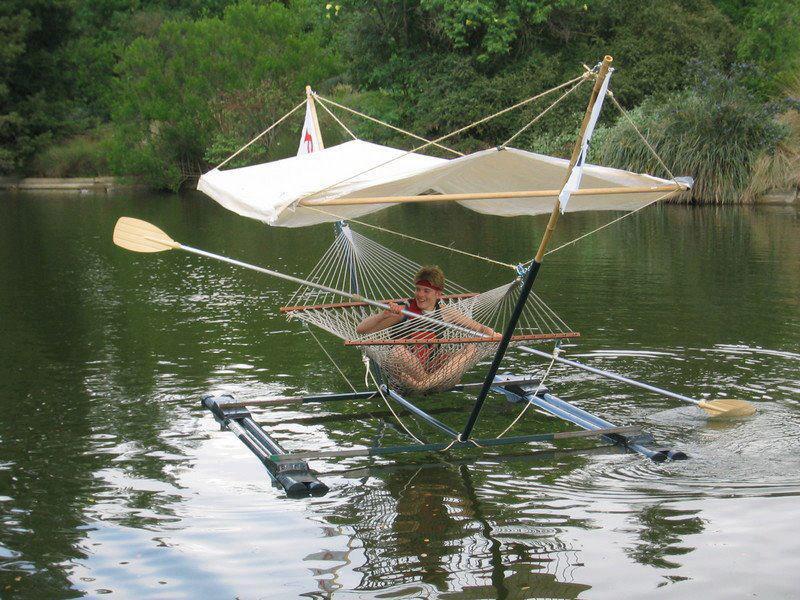 Prototype for a Homo habilis watercraft???

In the end, I think maybe those anthropologists who’ve been dissing Elaine Morgan and her predecessors over the years might at least acknowledge that their basic premise could well be fundamentally correct. Though many details of their theories are a bit fanciful, it seems increasingly likely that the evolution of our species has indeed always been rather aquatic. 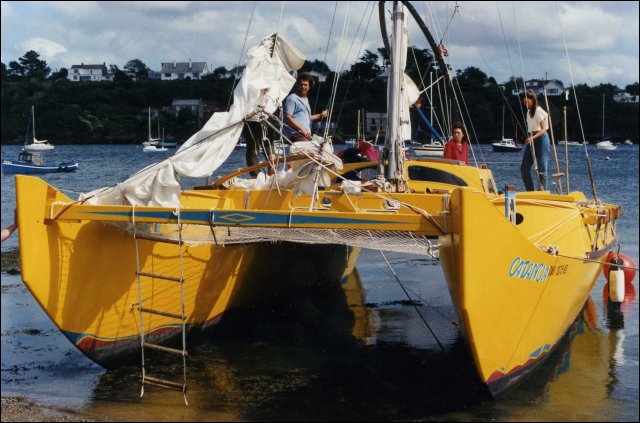