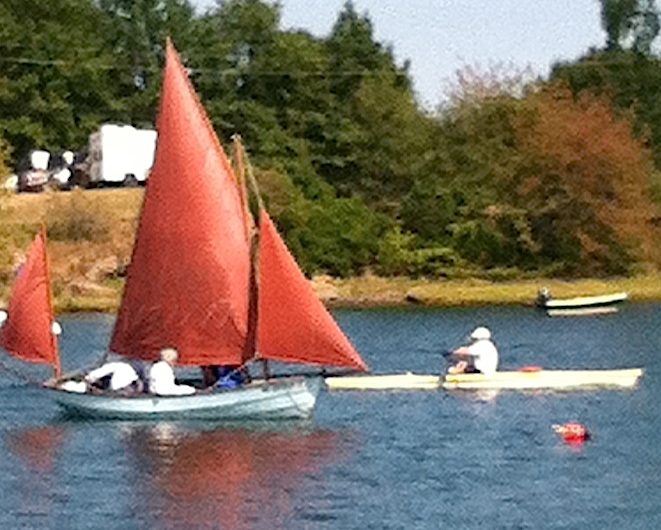 I INFLICTED BOTH FORMS of sailing on the family over the long weekend, with rather mixed results. First, on Saturday, we attempted to campaign our 15-foot Drascombe Dabber Mimi in the Round Island Regatta (RIR) in Portsmouth. The photo up top (snapped by a friend on shore with a phone) shows us in our moment of glory, with sails drawing nicely, actually going somewhere.

It certainly was a struggle getting to that point. Very soon after we pulled away from the dock, located just a few short yards from the start line, I knew something was wrong. The jib wouldn’t trim properly, and the mainsail and the tiny mizzen (a mere afterthought of a sail) between them could not develop enough power to fight the strong current that was running. In only a moment it was obvious we would be swept into the low-hanging maw of the Pierce Island bridge if action were not taken.

I quickly dropped the lower end of Mimi‘s outboard motor into the water and started it up. It ran for perhaps 10 seconds and refused to start again. The distance to the bridge, meanwhile, grew shorter at an alarming rate. Fortunately, we were swept down on to a mooring and barely managed to loop the eye of its pennant over our stern cleat.

I worked to restart the engine, and one of the regatta crash boats promptly appeared to offer a tow. I declined, saying I was sure I could get the engine running, and daughter Lucy immediately yelped in protest. Smart girl that Lucy. “Dad! We need a tow!” she declared, repeatedly and ever more loudly, while I fumed over the motor. I debated throwing her overboard, but in the end waved my arms and called the crash boat back.

They pulled us clear of the bridge and dropped our towline once we were well up-current of the start line. By now it was only 10 minutes to the start. We tried sailing again, and this time I quickly grasped that I had led the jib sheets wrong way round the headstay (which on a Dabber, oddly, is well inboard of the jib’s luff). We sorted out the sheets, and Lucy and her sister, Una, were soon squabbling over who would get to tend which one.

I was afraid to get close to the start line again, because there was little wind there, and the current was strongest there, and the bridge was still waiting not very far behind it to catch those who failed to stem the current. My plan was to stay well above the line until the final seconds before the start, then swoop down around the pin. Meanwhile, the race committee was releasing hordes of kayaks and rowing shells on to the course, all of whom seemed to think they had right-of-way over sailboats. Those in the shells, though more inclined to yield than the kayakers, were most dangerous, as they couldn’t easily see where they were going.

Between dodging shells and kayaks and fretting about the current, we were nowhere near the line when the horn sounded. Then it took several tacks to get away from the line after we finally crossed it. Amazingly, this left us in the middle of our class. There were three sails ahead of us, and another three behind still striving to keep from getting swept into the bridge. 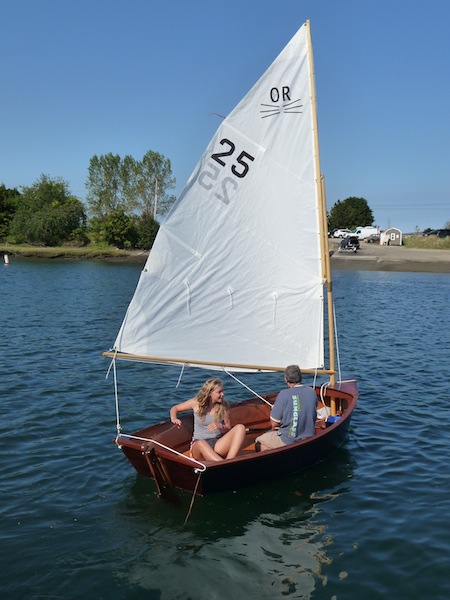 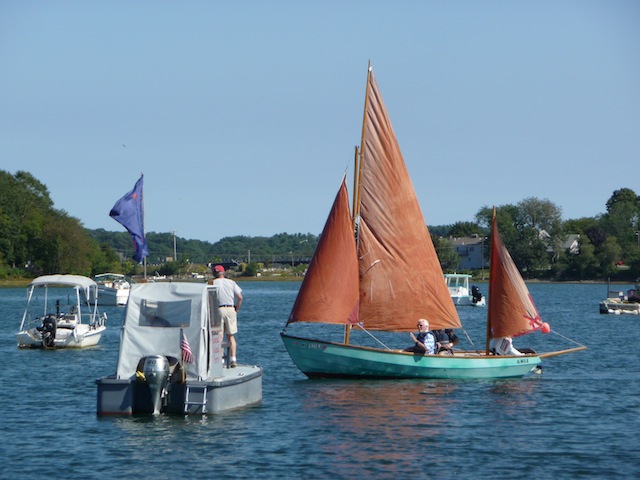 Our larger sistership, an 18-foot Drascombe Lugger, finished well behind us

From this point forward all went well. We had more waterline than all the boats in front of us, and also, I think, a bit more local knowledge, so were able to close the gap between us as we beat up to the windward mark. When two of the boats were waked by a rude passerby in a skiff, we fortunately were close enough to pass them as the wind was knocked from their sails, and so rounded the mark in second place. We lost no ground on the downwind leg and finished in this position, feeling very relieved that the race committee had decided mid-race to cancel the second circuit of the course for our class. 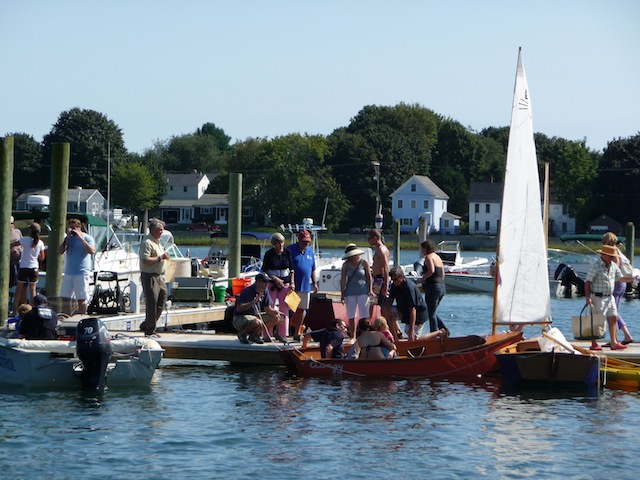 Post-race scene on the dock at the Chandler’s Loft

The RIR recognizes only first-place finishes (there is no handicapping), which at least is an improvement over last year, when the race committee was so disorganized it couldn’t identify first-place finishers in any class. So we won no prize, but felt pleased with our effort and had a fine time socializing with friends, neighbors, and competitors at the party afterwards. 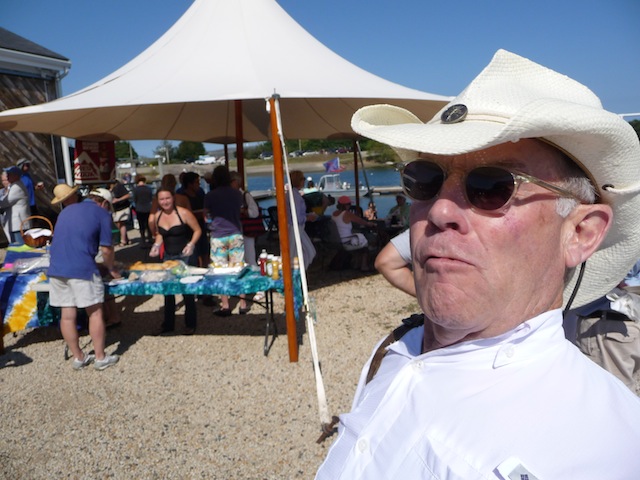 THE NEXT MORNING, Sunday, we tried cruising aboard Lunacy and had a similar sort of experience. We arrived at Portland Yacht Services with a considerable pile of luggage and groceries, loaded this into the dinghy, and only then realized we had forgotten to bring lifejackets for the girls. We walked next door to Hamilton Marine to buy some, but found, not surprisingly, that they were closed. Then it started pouring rain.

I was sure we had suitable lifejackets aboard Lunacy, so while Clare and the girls took shelter in the car, I resolved to dinghy out through the rain to retrieve them and to put all the luggage and groceries aboard the boat. First, however, the dinghy’s outboard motor refused to start without a fight (you’ll note a recurring theme here), then when I finally made it to Lunacy (pumping the choke on the motor in-and-out-in-and-out to keep it running) I found that in fact there were no lifejackets aboard that would fit the girls (at least not ones that the girls would be willing to wear). I returned to the dock in a rather dark mood and loaded our now soaked luggage and groceries back into the car.

While we sat in the car eating the sandwiches we had hoped to eat aboard Lunacy while sailing across Casco Bay to some idyllic anchorage, I did some research on Clare’s iPad and found a nearby West Marine store that was open through the holiday. After lunch we drove over and bought some lifejackets, plus a new waterproof windbreaker for me, as the zipper on my old one had frozen solid so that I couldn’t zip it up (another recurring theme this season) to keep myself dry.

By the time we finally returned again to the dock at PYS, the rain had stopped, and from this point forward, as had happened the previous day, all went well.

Due to the late start we didn’t have time to go far, but we did have a splendid sail up to the Chebeague Island Inn (which, coincidentally, we first discovered after getting a late start to last year’s Labor Day weekend cruise). 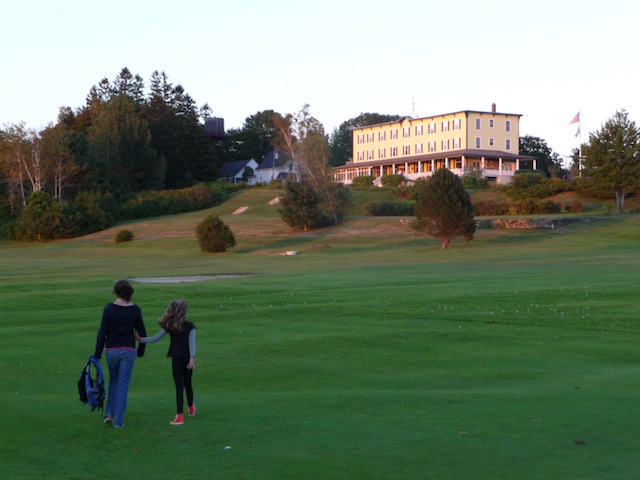 Lucy and Una stroll up to the inn for dinner 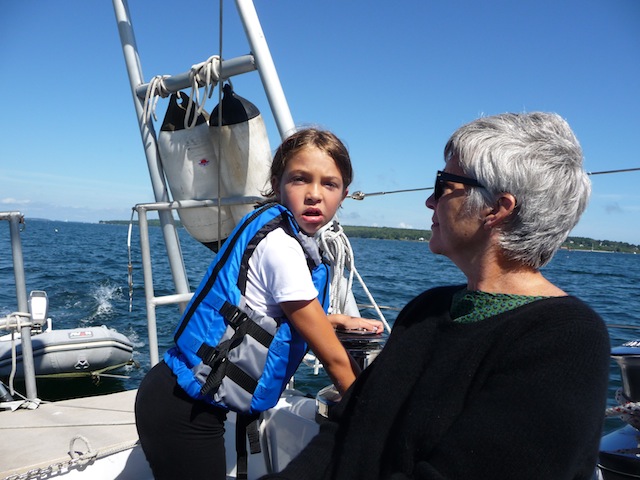 Lucy and Clare hanging in the cockpit 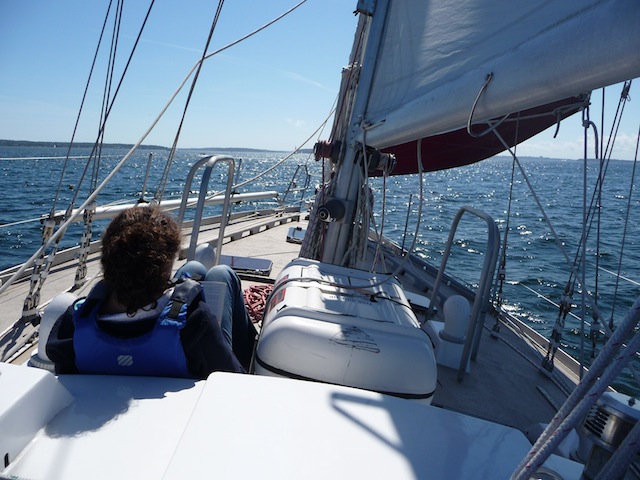 Una enjoys a book on deck

We enjoyed a fabulous meal ashore and then had a quiet night aboard. Yesterday, the Laborious Day itself, came clear and sunny, and we had an even more spectacular sail back to Portland after the sea breeze filled in.