I WAS THINKING Thursday morning it was about time for more news on the awful fate of Aegean, the Hunter 376 that slammed straight into North Coronado Island during the Newport Ensenada Race in April. And bingo! Up pops a post from my fellow SAILfeed associate, the mysterious Mariner, describing how a pair of divers from San Diego, Russell Moore and Ed Harris, have found the wreck of the boat right where it should have been, under the cliff where Aegean‘s SPOT track ended.

Googling around a bit, I see another private team, led by one John Walton, also dove on the wreck, and though this was reported over month ago, few remarked on it at the time. In my last post on Aegean, you may recall I also mentioned that an anonymous poster on Sailing Anarchy who called himself “Anarchist Russell” said he dove on the site and found nothing there. But now it seems likely this is the same Russell Long who got ink this week for finding the wreck, as he and Ed Harris claim to have visited the site three times since May 2, which is when “Anarchist Russell” made his announcement. Presumably they came up empty the first time. For the record, John Walton reportedly made his find on May 7. 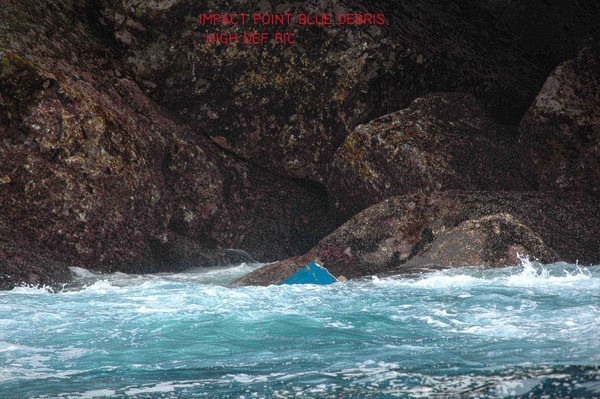 Impact site photographed by Walton’s team. One piece of debris is visible above the water. This was also spotted by the Coast Guard from the air soon after the crash 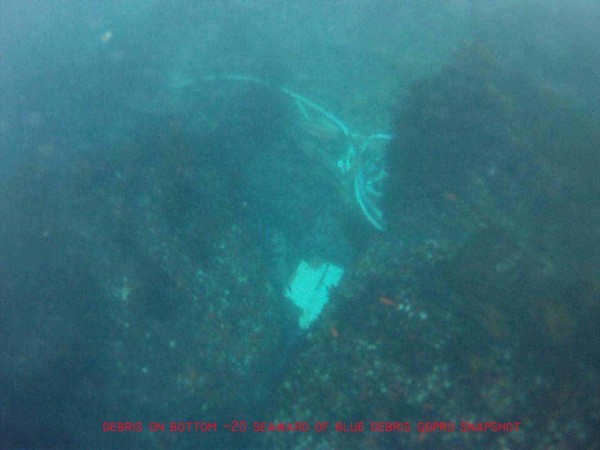 Debris found by Walton’s team. I can’t make out what it might be 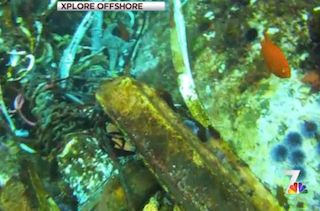 Debris found by Moore and Harris. The back end of the engine, with chain wrapped around the shaft at the transmission. Probably this was spare anchor rode stored near the engine that got sucked into the spinning shaft during the crash 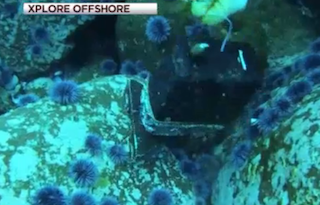 Debris found by Moore and Harris. Looks to me like a Raymarine component. Maybe part of an autopilot? 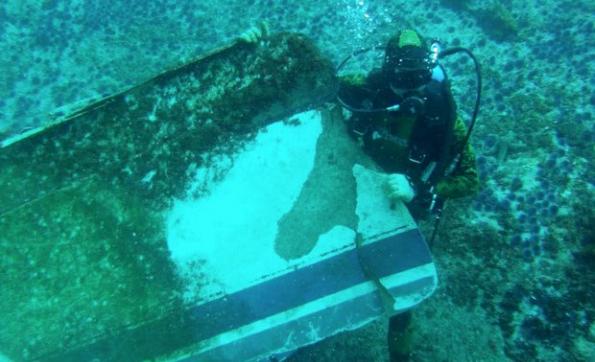 Debris found by Moore and Harris. One TV news report I saw described this as the boat’s keel, but it doesn’t really look like that to me

All of which only confirms what we knew we had to believe in the first place, which is that the four crew who lost their lives aboard Aegean, experienced sailors who had raced to Ensenada before, somehow were so out of touch with reality that they motored straight into the island at about 7 knots in calm, clear conditions.

There has been a great deal of speculation as to how this might have happened. I thought at first maybe the skipper, Theo Mavromatis, had been on watch alone, with the other three sleeping below, and had somehow fallen overboard (pissing, perhaps?), because his body was not found with the others. But then it turned out he, like the others, had suffered blunt-force injuries and thus most likely had also been aboard at the time of impact.

There has been talk about carbon-monoxide poisoning and some discussion about THC from pot being found in the blood of one victim. But the likeliest explanation, of course, is that all four simply fell asleep.

We’re still waiting for final reports from both the U.S. Coast Guard and an independent U.S. Sailing review panel, though the U.S. Sailing group has already announced a preliminary finding that Aegean did in fact crash on North Coronado. No news there, obviously, but one member of the U.S. Sailing panel, Evans Starzinger (a.k.a. “Estar”), published a post on Sailing Anarchy yesterday that contains a lot of information I hadn’t seen before:

My personal thoughts and conclusions are (these are my thoughts not necessarily the official panel conclusions):

1. It’s an important tactical decision in this race whether to go inside or outside the islands. In previous races the skipper of Aegean set a waypoint a mile or so in front of the islands to signal they needed to make a decision which way to go. And they used waypoint alarms.

Normally it is good practice to offset waypoints away from hazards so you will not run into the hazard if you over run the waypoint a little. However, in this particular race, the tactic of putting a waypoint just in front of the island is reasonable to allow you to decide which side to go with the minimum distance wasted. But if so you sure want to be paying attention when you arrive at that waypoint.

2. In previous races they did run radar but did not use a guard zone alarm because there were so many targets (race boats) it would just be going off all the time. However if they had set a small guard zone (say 1nm) it would still have given them time to react and would not have had too many ‘false alarms’, at least a few hours after the start as the competitors were spread out.

3. In previous races there were always at least 2 on watch at night, never did they leave only one on watch. The skipper usually went to sleep for an hour during the night motoring period.

4. The weather was calm (5kts of breeze) calm seas but a long ocean swell that was breaking on the island. It was clear with good visibility but dark with the moon just set.

Assuming they did these things as they had in previous races, then you have to conclude that at least a couple people on watch were for some reason not paying attention to a known hazard and that they did not hear or respond to the waypoint alarm. Unfortunately the human body likes to sleep at 1:30am and you really need to exercise discipline to stay alert then. There are historic procedures that have been developed to help crew stay alert – like regularly making log entries and plotting positions and setting timers to do every 10 minute horizon and radar/plotter scans, etc.

The autopsy reports found no indication of CO poisoning and no alcohol. My personal conclusion is that they were complacent after doing 6 of these races and just fell asleep. I can’t see any other reasonable conclusion.

4. Some of the crew were alive and alert after the impact as someone pushed the SPOT SOS button approximately 7 minutes after the impact. Unfortunately this SPOT SOS message did not get communicated to the authorities and no search was launched until the next day when other vessels found the debris field. A DSC may day would have been much more effective (with all the racing boats near by) but it may be that their mast fell down quite quickly on impact. An EPIRB would also have been more effective (USCG san diego would have launched assets within 30 minutes with a gpirb signal) but they did not have an epirb.

5. I believe the natural human inclination in this situation would be to try to swim toward land but in this case there was no safety that way only rocks and a cliff. They might have survived if they had tried to swim out away from land but at night they could probably not see that. Water temps were 62F. They died of blunt trauma, bashed on the rocks by the swell (3 died directly from blunt trauma and one drown due to traumatic injuries).

6. None of the bodies were wearing pfd’s. When you abandon ship you should really don a pfd.

Bottom line . . . we all make mistakes, unfortunately the outcome was truly severe in this case. I am still surprised that all died in this incident. It is an intense reminder of the basics of seamanship – keeping a real watch at 1:30am, navigating to avoid hazards even if you miss a waypoint, and properly making mayday/abandoning ship.

Though Evans notes he is speaking only for himself, I expect his ultimate conclusion, that they had to be asleep, will be shared by the rest of the panel.